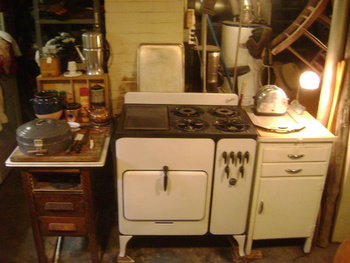 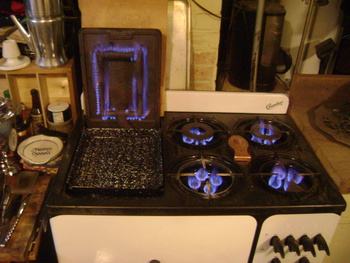 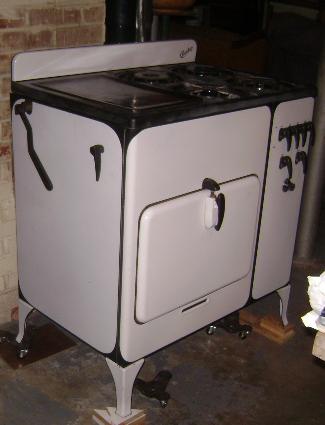 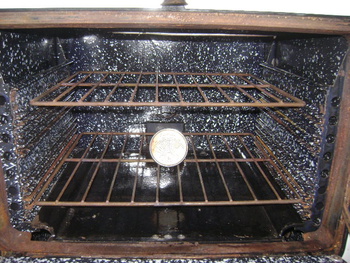 I live in my grandmother house that was built in 1939. They bought it from the original owners in 1943. She used to have an old long legged 1920's stove in a basement kitchen that she had set up. When she died, most of her stuff got carted away & doled out amongst the relatives. They did leave the 1953 GE fridge though. I looked for years to find a stove to replace hers, but found nothing I felt was suitable.

One day a couple of years ago I came upon an ad on the local Craigslist titled; "Chambers Single Oven 4 Burner Stove w/ Side Griddle". The ad when on to say; "This is a Chambers single oven 4 burner stove with side "Griddle" that has been in our family for years.
The "story" behind this stove is that my grandfather's aunt's mother bought the stove new in Frankfort, KY after the 1937 flood. She used this stove in her home until the mid 1980's, and it made it's way down to us. This stove has just been thoroughly cleaned and is in GREAT condition for its age!! Pick up only or possible personal delivery. " It was in a nearby small town about an hours drive from me.

I did a bit of research & found that Chambers stoves were made from 1912 to about the early 80's, & were renowned for there quality & featured, cooking with the gas turned off, or as their literature said, CWTGTO. The bad part was that I could find absolutely no information on this particular model, but I did find some similar looking ones.

I drove up with my cousin with me to help load it, because I had read that these are especially heavy. I would guess it weighs about 350 pounds even though it's only 35 1/4 inches wide by 27 inches deep by 38 1/2 inches tall, including all the handles, levers & vent on the back, that stick out on three sides.

It was in amazingly good & clean condition. I check it for leaks & had to tighten a few fittings & calibrate the thermostat, & I was up & cooking. It could probably use a bit of refurbishing, but It's in such good original condition, I hesitate to do too much. It is a joy to cook on. And the patented In-A-Top broiler/griddle is wondrous feature that became one of Chambers trademarks until they stopped making them in the early 80's.

Chambers kitchen ranges biggest selling feature has always been the oven, that is heavily insulated with rock-wool, which is similar to fiberglass. It allows you to fire the oven for a short period of time, & when shutting it off, it closes air intake & exhaust vents on it, which traps & holds the built up heat to be retained in the oven to continue the cooking process. It has a very heavy cast iron oven bottom or baffle, as it's called, between the burner & the oven cavity, that heats up & stores the heat for very even & stable heating. Returning the required time later, which can be several hours, you'll find your meal perfectly cooked & still hot. I've cooked the best pot roast I've ever had, & come back 3 or 4 hours later to find the oven still at 180 or 190 degrees.

The one other feature that my stove has, is the cook-top's Daisy Burners, patented in 1931 at the same time as the In-A-Top broiler/griddle. They continued to use this same style burner' with very minor alterations to improve it until their demise in the early 80's.

Chambers also seems to have been the first to introduce separate component cook-tops & ovens in the 50's, some of which continued to feature the In-A-Top broiler/griddle. In fact on one of her many shows through the year, Julia Child used a Chambers 42 inch 4 burner cook-top with In-A-Top broiler/griddle, although she usually had a cutting board on top of it, with ingredient awaiting use.

This stove is one of my most prized possessions, & I would never think of parting with it for anything. In the couple of years since getting it, I've done extensive research on all things Chambers, & have only ever come across three other of this model. Only one of them was in use. The other two were in terrible neglected shape. In my humble opinion, for my personal use, this stove is kitchen range perfection personified.