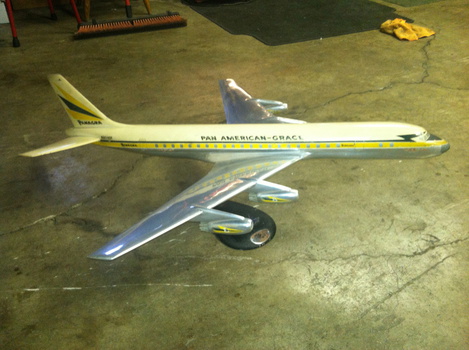 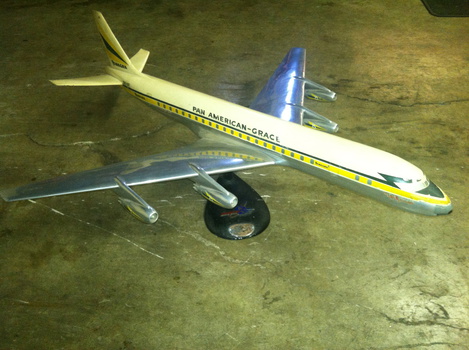 This is an Executive model of a Pan American DC-8 1/200th scale
created by McDonnell Douglas.The story that I was told on how I became the owner of this rare beauty happened like this.My uncle was working for a television station here in Chicago.On February 1st,1967 Pan American separated from Grace which was the cargo division of the airline.The model was used as a prop for the news cast at the time of the split.I was told that it stayed around the station for a couple of weeks,and my uncle asked what to do with it the big boss told him,Take it Home so he did.Since I was born on February 1st,1967 my uncle gave it to my father(his brother) as a gift for the new born me. So in the long run this DC-8 been with me from almost day one and as a kid always wanting to play with it as a toy found out the hard way that it wasn't a toy and it was very heavy (cast aluminum) that I remember receiving a pretty good o'l black eye try to get it down from my dresser,she sits in my office now and is always a great conversational piece of Aviation History.If anyone has any history or stories to share they would be appreciated.Thanks RC