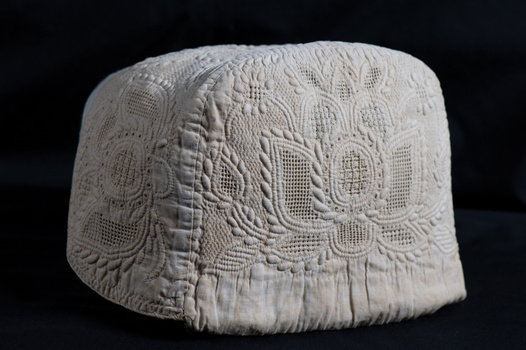 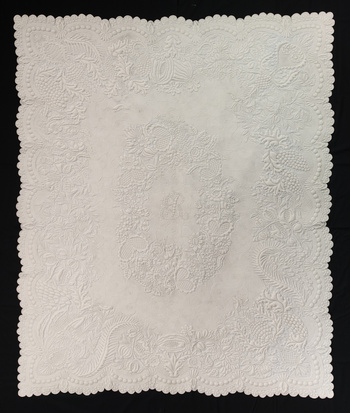 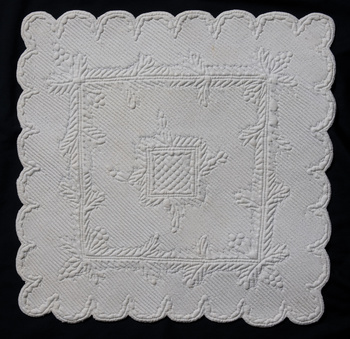 These supple, all-white corded and quilted furnishings-from bedcovers to quilted bodices and caps-grew out of the thriving textile traded centered on France's Mediterranean port of Marseilles. During the the seventeenth century, the region's interpretation of quilted needlework became so treasured that it seduced markets throughout Europe and its far-flung colonies.

Broderie de Marseille is a form of three-dimensional textile sculpture using plain white cloth and white cotton cording, deftly manipulated with needle and thread to reveal patterns highlighted by the resulting play of light and shadow on the textile surface. Skillful execution of broderie de Marseille resulted in delicate, refined work that graced the homes an figures of aristocrats and launched an international passion for all-white corded needlework. The quilted works were filled with imagery expressing contemporary values, such as folk legends (Tristan), heraldic devices and royal monograms (on bedcovers), and floral wreaths an fruits symbolizing good fortune and fertility (on wedding quilts). Contemporary versions, today often referred to as "matelasse," are machine made and thus lack the intimate connections to the work represented by the confections of the original needleworkers-almost all of them presumably women.