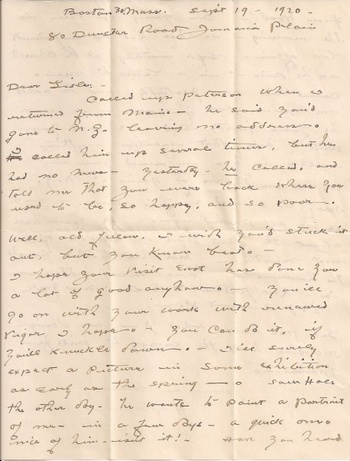 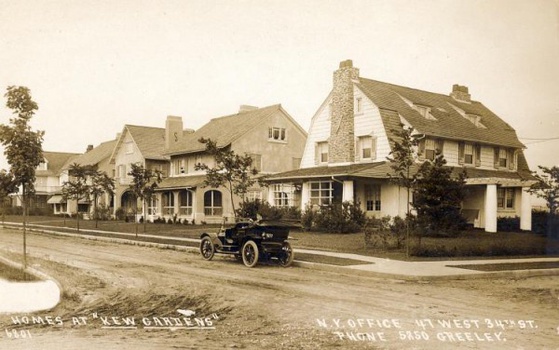 Here's another lovely auction find from a few years back.

Dated September 19, 1920, it's a manuscript letter from illustrator Haydon Jones to an artist friend in Ohio. I can't seem to find the scan I made of the 2nd page, but the transcript of the complete letter is below (in any case, the guy had really idiosyncratic handwriting and it is difficult to make out even up close.)
********************************
[Envelope is addressed to Mr. William H. Lisle, Artist, Killbuck, Ohio]

Dear Lisle,
Called up Peterson when I returned from Maine - he said you'd gone to NY leaving no address. I called him up several times, but he had no news - yesterday he called, and told me that you were back where you used to be, so happy, and so poor.

Well, old fellow, I wish you'd stuck it out, but you know best - I hope your visit East has done you a lot of good anyhow. You'll go on with your work with renewed vigor I hope. You can do it, if you'll knuckle down. I'll surely expect a picture in some exhibition as early as spring.

Saw Hale the other day. He wants to paint a portrait of me in a few days - a quick one. Nice of him isn't it! Have you heard from Wood? -- I'm going up there in the morning -- he has had an unfortunate love affair -- left "waiting at the church" as he puts it in a letter to me. Called him up yesterday and he asked me up - poor fellow. -- I know he feels pretty bad. Should you write to him, don't mention anything unless he has informed you ---

We are on the eve of going to N.Y. Mrs. J. secured a fine house -- and we are all packed up. We leave here about the first part or the middle of next month -- Max, her brother, bought the house. Our new address is Kew Gardens L.I. New York - 259 Brevoort St.

Let me know what you are doing - I didn't have the energy to write from Maine.
Yours as ever
Haydon
********************************
Haydon Jones (1871-1954) was born in Ohio, and became a fairly well-known and definitely well-traveled illustrator who worked for a series of newspapers, including the New York Mail & Express, the San Francisco Examiner (where he covered a particularly gruesome murder trial, among other things), the New York World when it was owned by Joseph Pulitzer, and the Boston Herald. He also illustrated a number of books.

In 1898 Jones went to Cuba to cover the growing hostilities that eventually became the Spanish-American War, got taken prisoner by
the Spanish and was traded back to the Americans, along with another war correspondent, for two Spanish officers. His wife must have been a very patient and forbearing woman - he was all over the country in what seems like a fairly short time. I also found a record where Jones and his wife sued their landlord because the landlord put arsenic powder around the baseboards of the house as a pesticide and made their whole family sick.

The second picture above shows the house at 259 Brevoort Street, New York, to which Jones refers in the letter. It's the one with the tile roof, second from the right. I'm unsure of the date of that photo, which I found online.

Other than a listing in the 1920 census, I haven't been able to uncover any information about William Lisle - apparently he wasn't able to achieve any success with his art in New York and returned to his home in Ohio, where he disappeared into obscurity. Some day I'd like to visit the historical society for the county where Killbuck is located (about 90 minutes NE of me) and see if I can dig anything up about his later life.