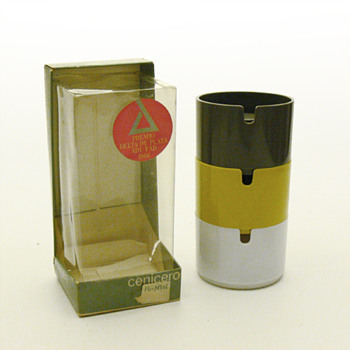 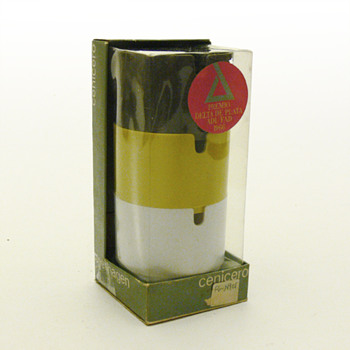 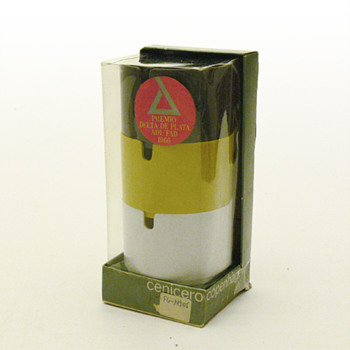 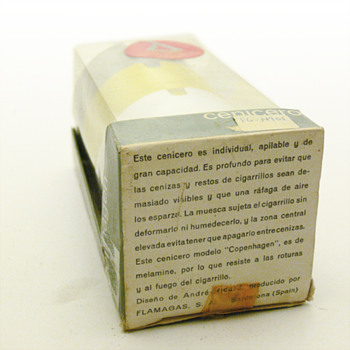 As I told you when I was talking about my Flamagás Teide ashtray, I was very lucky to get several Flamagás stuff (designed or not by André Ricard) in their original boxes.

I like this one specially because it is the ashtray of those designed by Ricard which I consider the best, and the one I started my collection with, plus it is a real icon (or should I say THE real icon) of Spanish design. So, no matter in what a bad condition it is, I am thoroughly proud of it.

As you can see it holds the sticker with the Delta awards symbol and the text "Premio Delta de Plata ADI-FAD 1966" (Silver Delta Award ADI-FAD 1966 - to explain what the ADI FAD is I'd rather say what they explain at their own website, so in their own words "The Arts and Design Promotion [FAD] is a private, independent and not-for-profit association that has the objective of promoting design and architecture in the country's cultural and economic life. The FAD is articulated via six associations that represent the different disciplines of design", being ADI-FAD the one dedicated to industrial design.

On the fourth pic you can see the explanation about the ashtray: "This is a single stackable and great capacity ashtray. Is deep to avoid the ash and remains of cigarettes to be too visible as well as avoid them to be blown by a blast of air. The notch holds the cigarette without deforming or moistening it, and the raised central area avoids having to shut it down in ashes. This "Copenhagen" ashtray is made of melamine, so it is fire and breaking resistant"... I hope the translation is ok.