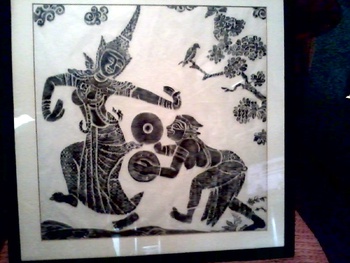 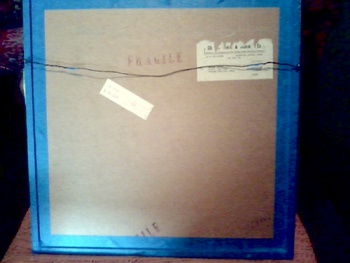 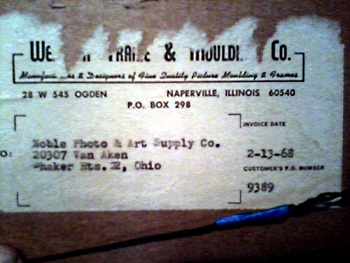 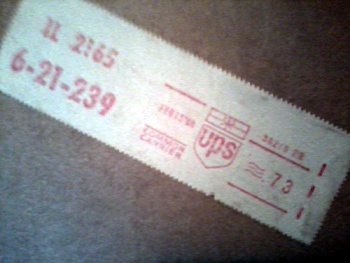 OK...I found this Angkor Wat Temple Charcoal Rubbing at "Volunteer's of America today. It had a price sticker on it saying it was an "original" and it cost a bit more than I usually spend but I bought it anyway. It was practically out of it's frame because they had pulled out the nails. They were probably checking to see if it was signed or dated. When I got it home I wanted to clean the glass and secure the frame. I removed the cardboard back and flipped it over. It had a UPS sticker dated Feb. 15, 68'. Also a frame company label dated 1968 . I guess they just used the cardboard from the box that the frame came in to make a back for the picture.The labels left white outlines on the back of the rubbing's mounting paper which had yellowed over the years. So that dates it to the time when they banned doing these at the temple complex.The actual rubbing is 16"x 16" . Matted and framed it's 20" x 20" They took wet rice paper and applied it to the wall. It has an embossed look with the charcoal highlighting the details. So I guess it's original. The value, I don't know. I've seen $ 20.00 and up at various online auction houses. "Glen's Art Corner "on Ebay has an auction for this exact same image and look at the price! WOW !! - Mike-

This is a brief description courtesy of" Glen's Art Corner" on Ebay:

"The Angkor Wat is the largest religious structure on Earth. It is a spectacular temple complex located in the jungles of Cambodia. This is an original rubbing, done prior to 1967. The art of rubbing has since been banned by the Cambodian government in an attempt to preserve the breath taking beauty of the Temples"