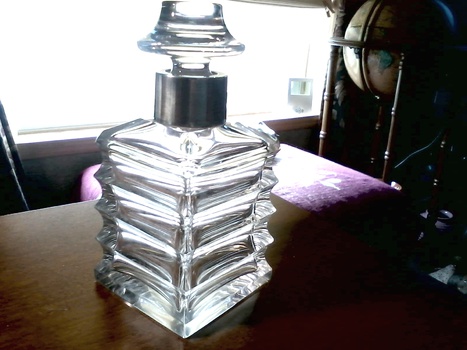 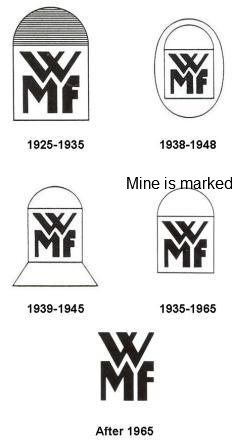 The Sheffield Village Historical Society was having a huge yard sale this weekend. Unfortunately I didn't get there till 1PM. Just happened to drive by on my way home. So I probably missed some good pieces. Lots of big furniture and a couple of tables of glassware and china (mostly overpriced). I did find this decanter, It has a silver collar (was totally black till I polished it) and is super heavy for it's 8" tall size. There is a small mark stamped on the collar which I finally found. The stamp is WMF NS which is Nickle Silver from the Württembergische Metallwarenfabrik in Wurtemberg Germany. They used this mark from 1935 to 1965. The style of the decanter seems to indicate and earlier date probably 1930's/ 1940's. -Mike-

The original company that evolved into WMF was established by Daniel Straub in 1850 as the Maschinenfabrik Geislingen, a small repair workshop set up to construct railway tracks and manufacture mill turbines. Geislingen is a small town in the state of Wurtemberg in the Swabian Alb region of Germany. Straub joined with the brothers Freidrich and Louis Schweizer to form the firm "Straub & Schweizer" in 1853 and the company became Straub & Sohn when the Schweizers left in 1866. The firm mostly manufactured silver plated household items.
WMF became strongly influenced by the Art Nouveau style at the turn of the century with Hugo Debach as director and Albert Mayer as artistic director. They experimented with new techniques to produce a great variety of decorative designs. The first world war ended the Art Nouveau era in 1914. This brief but golden time produced a great variety of most desirable artistic and functional wares from the WMF factory.