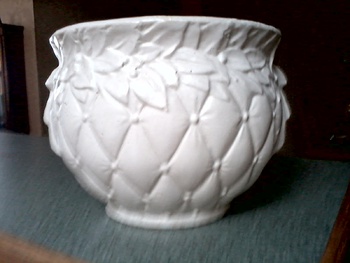 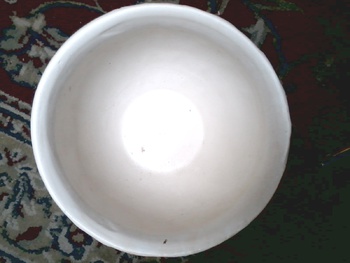 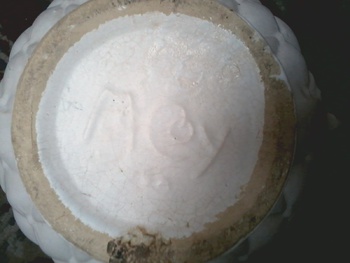 Sometimes last minute trips to Goodwill can be very productive ! I almost dropped dead when I saw this. Especially when I turned it over and saw McCoy USA on the bottom. It wasn't an insane price either (someone didn't catch this ??). I checked it over, no cracks or chips. Super heavy 10" dia, and 8 1/2 " high. also it was kind of dirty with lots of factory imperfections. I've noticed that on a lot on their early pieces. It's been used for it's intended purpose. I gave it a good but careful bath. I thought "How awesome was this ? It looks great" ! It does have a pedestal that matches it but it wasn't there. There is one on Ebay for 50 bucks but that's not in the budget. I've read the" jardinieres" are fairly common but the pedestals are not. I've never seen a jardiniere till today but I don't live in the heart of "pottery central". You just don't see these pieces up north were I live. -Mike-

The Jardiniers and Pedestals Line was one of the largest lines of pottery McCoy produced. From the turn of the century to the 1970's both the Nelson McCoy Pottery Company, and Brush McCoy produced these hard to find pieces.

It would be important to note that not every piece is marked. However the pieces that are marked typically carry the NM USA mark, McCoy USA, USA, etc.

While finding the Jardinieres and Pedestals individually is not too difficult for the polished collector, finding both matching Jardiniere and Pedestal together is many times impossible.

Collectors sometimes refer to these as "jards and peds."