Flashback: A Concord Coach in Miniature

This article on Wells Fargo stagecoaches gives a brief history and describes the way they were decorated. It originally appeared in the September 1941 issue of American Collector magazine, a publication which ran from 1933-1948 and served antique collectors and dealers.

The desire to have a model of an old-time Wells Fargo coach for my own collection of the railroads and other means of transportation at Pittsford, New York, came as a swift inspiration, rather than a long thought-out dream. For had I not been advertising manager of Wells Fargo & Co.; the first and last and only advertising manager that that distinguished old-time concern had possessed? 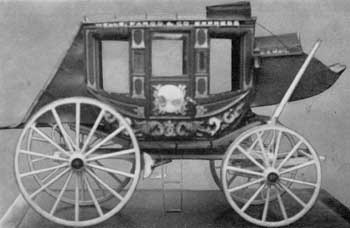 Concord Coach Model: This is a scale model of the coaches made for Wells Fargo & Co. by Abbott, Downing & Co. of Concord, New Hampshire. The decorative painting of this model was done by Edwin Burgum who, with his father, did the painting of the original Concord coaches that were shipped by sailing ships around Cape Horn for use on the Wells Fargo stagecoach lines in California. In design and coloring, the painting is the same as was used on these original coaches.

I had stayed with it until it went out of active business here in the United States — in the midsummer of 1918. I had thought Wells Fargo, dreamed Wells Fargo, lived Wells Fargo for seven glorious years of my life. I had tramped in its footsteps up and down the hills of California and studied its traditions, into ghost towns — like Jimtown and Hangtown and Columbia — up one street and down another in the lordly San Francisco; had followed it through Oregon and into Arizona and Texas; all the way east to the Atlantic.

Once, when in active service for the old company, I had purchased an ancient stagecoach for it. A battered vehicle which, in the 1850’s had been shipwrecked off the coast of California at Cape Pescadero, only to be fished out of the waters of the Pacific and to do a hundred thousand miles of faithful road service thereafter.

We had wanted to restore the old coach and show it at the San Francisco Fair of 1915; to restore it meant to repaint it, and no one seemed to know the exact scheme of an old-time Wells Fargo coach. Then someone went across the continent to Concord, New Hampshire, and there found the old firm of Abbott, Downing & Co., who had built that Pescadero coach, still doing business, manufacturing carriages and delivery wagons. And they had the color schemes of all the onetime Wells Fargo coaches locked in their ancient safe.

At one time there were over a thousand stagecoaches in the service of Wells Fargo & Co. and the most of them had been built by Abbott, Downing & Co. and sent around the Horn by sailing ship to San Francisco. The greater part of these Concord coaches, whether for Wells Fargo or for other customers, far and near, were hand-decorated by two men, father and son — John Burgum, an Englishman, and his son, Edwin Burgum, born in the United States. Other men might place the flat colors upon the coach bodies and their running gears, but it was the Burgums who executed the delicate stripings and scrollwork of black and gold and the exquisite little oil paintings that went upon the panels of the doors; who made each Concord coach a thing of art as well as one of great utility.

Although the old factory buildings still remain in South Main Street in Concord, Abbott, Downing & Co. have been out of business more than a dozen years now. A few of the old employees survive. Among these, Edwin Burgum, a hale and hearty gentleman of eighty-three.

It was Mr. Burgum who this past winter decorated with his own highly skilled hands the miniature Wells Fargo stagecoach which now stands in my old house at Pittsford, New York. The coach itself was made by a much younger man, Mr. R. V. Stapleford, who teaches model-making in the schools of Concord, and who has been reared in the traditions of that old town. Wendell Holt, also of Concord, did the upholstering. These men worked faithfully to the plans and colors of the old Wells Fargo coaches and their handiwork, placed in the window of a Main Street store in Concord, attracted wide attention and many newspaper notices.

This is the simple telling of the creation of a bit of authentic Americana which in the years to come may rank as an antique of unusual quality and no little value. It is exquisitely made, even to the tiny reproductions of the paintings upon the doors — the one of Mount Washington in winter and the other — could you guess it — of the Old Man of the Mountains. No detail is neglected. The little coach, a bare twenty-four inches in length, red in body and yellow in running gears, tells its own story and tells it faithfully.

Reminiscent it is of other days. I look at its delicately poised body mounted upon the stout leather thoroughbraces and marvel at the intrinsic design of a Concord coach. No passengers rode upon its roof, save those that gathered about the driver. The roof was light and the center of gravity low. In this way a coach might negotiate mudholes and stiff mountain grades in ease and in safety. They traveled hundreds of thousands of miles and there is not a record of one of them ever having broken down, through fault of construction.