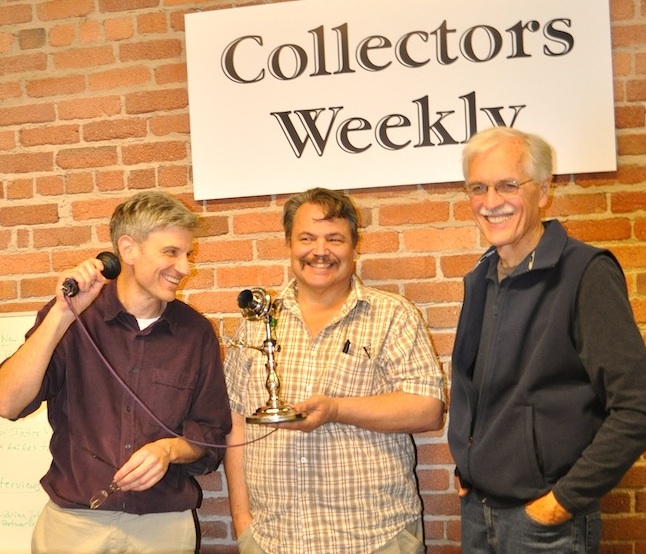 Two special guests visited our San Francisco headquarters today, Gary Goff (right) and John Infurna (center, seen with CollectorsWeekly.com publisher, Dave Margulius, at left). Gary is a renowned telephone collector, who runs a terrific website called TelephoneCollector.info. John also collects, but he may be better known for the painstakingly authentic replicas of everything from glass Red Cross mouthpieces (fabricated to his exacting specifications by Fenton) to potbelly candlestick telephones from the late 1890s. In fact, he says some sneaky eBay sellers try to pass his mouthpieces off as originals. 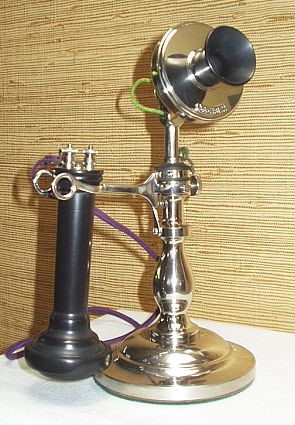 Both gentlemen were in town for Telephone Collectors International’s  Ninth Northern California Telephone Collector Show, which takes place on Saturday, November 5, 2011, in nearby San Jose. Gary was good enough to show us how he uses our site (we took a lot of notes!) and also pointed out how we could upgrade the 1936 Western Electric phone booth we have in our office (working, but needs a new fan and switch so the light will go on when the door shuts). Meanwhile, John showed off his latest creation‚ an amazingly detailed, nickel-plated replica of a Western Electric #9 potbelly candlestick from 1897. John says his phone sells for $3,500, but an original goes for $25,000.

“No one’s going to use this,” he says, even though his phone, wired to the original manufacturer’s specifications, works. “This is going to sit on a perfume shelf. It’s going to be moved around to different perfume shelves from here until eternity.”

His work features a polyurethane longpole receiver with outside terminals and a vintage Bakelite mouthpiece, the latter supplied by Gary. John says in the past, he has made a potbelly’s mouthpiece and other hardware out of an old bowling ball—when he realized it was a large hunk of ebonite. “I just took a chainsaw and sliced that sucker in half.”

This phone may be a fantasy item, but it is no toy. Was the collector in Goff jealous that John’s latest work of genius is already spoken for? Not in the least, mostly because he already has one of his own.