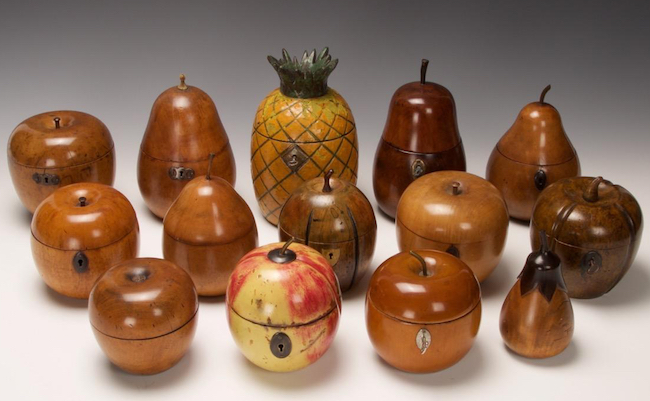 On December 16, 1773, when Samuel Adams and his fellow Sons of Liberty boarded three British East India Company-flagged ships to hurl 340 chests of Camellia sinensis—worth almost $2-million today—into Boston Harbor, tea was already an expensive commodity worldwide. But what offended Adams was not the price of tea itself so much as the fact that taxes had been levied on these precious leaves without the consent of England’s increasingly independence-minded Colonists. It was that act, taxation without representation, that helped bring a brewing revolution to a full boil.

“I think the fruit forms are just the best. They’re totally charming.”

Because the price of tea was so dear in the 18th century, homemakers in the Old and New Worlds alike stored their green and black teas in special containers made of porcelain, sterling silver, and lead-lined wood, some of which were fitted with locks. Several centuries later, these tea caddies, along with ones that followed them in the 19th and 20th centuries, became the obsession of a modern homemaker named Marnie Bramble, who collected more than 400 tea caddies from China, England, Europe, and the United States. One of Marnie’s three sons, thrice Tony Award-nominated producer, writer, and director Mark Bramble, became an ally in his mom’s passion for these slope-shouldered and fruit-shaped forms, filling in holes in her collection during his travels. Since Marnie’s passing in 2015, Mark has overseen the care of his mother’s caddies, occasionally adding to the horde, and recently he wrote a book about them for Schiffer Publishing called, simply, A Tea Caddy Collection. 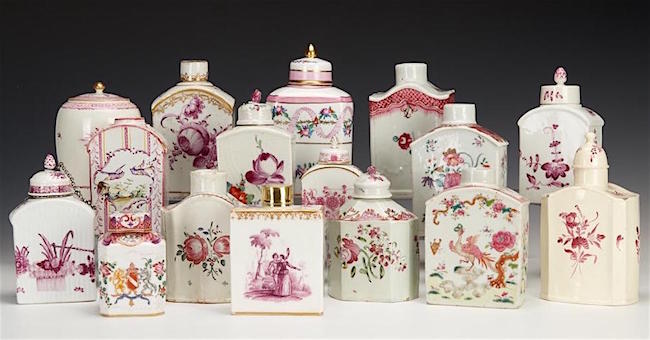 Top: A selection of English fruit forms from the late 18th and early 19th centuries. Above: This pink grouping includes Chinese exports and European caddies, mostly from the 18th century.

A coffee drinker himself, Mark has grown to love tea caddies for many of the same reasons his mother did. “My mother was a very petite person,” he told me when we spoke over the phone, “about 5 feet 2 inches tall. She had always been attracted to small objects, and one day, when she was at an antiques fair, she came across a little jar about 4 or 5 inches high, without even knowing what it was. She soon found out that it was an 18th-century Chinese export slope-shoulder tea caddy.” 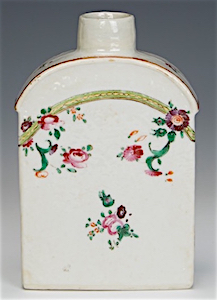 Charmed by the object’s diminutive form, Marnie quickly started digging into its history, which paralleled the rise of tea in the 18th century. Until tea came along, Mark says, gin and ale were the casual drinks of choice in England. “It was ale and sausages for breakfast,” he says. “Those were eventually replaced by tea with bread and butter.” Giving people an alternative to alcohol became especially important during the Industrial Revolution, he says. “There had been a lot of alcoholism—it wasn’t exactly a good thing for workers to be smashed while operating dangerous machinery.”

Beyond the cultural changes the objects implied, the objects themselves told stories, which brings us back to what would become known as the Boston Tea Party. At the time of that event, the tea that was bought and sold in the Colonies, as well as the many of the ceramic caddies made to store it, came from Asia, although both markets were controlled by Western interests and influences. “All of the Chinese export tea caddies we see today from the early 18th century—many are in the book—were designed by the Dutch East India Company and the British East India Company, manufactured in China, and then exported,” Mark says. “Sometimes the decoration was done in China, but other times the caddies were imported as blanks and glazed in Europe.” 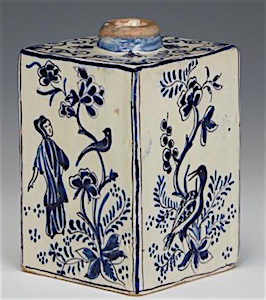 This French tea caddy, circa 1900, by the Samson pottery is made out of earthenware.

By the time of the Boston Tea Party, the Chinese export trade for caddies had long been on the decline, a victim of restrictive regulations imposed by China. That spurred ceramics manufacturing in England and Europe, especially in the Netherlands town of Delft. “Many of the shapes made in Delft were similar to those that had been manufactured in China,” Mark says. “The Delft industries were enormous,” he adds, “almost impossible for us to conceive of today.” Delft was a company town, the Silicon Valley of its day.

Turns out, the Colonists were not the only ones to chafe at taxes on tea. In England, the tea tariff had been 119 percent. “It encouraged smuggling and made the black market very popular,” Mark says. “That caused the fortunes of the East India Company to flounder. So, in 1784, Prime Minister William Pitt the Younger reduced the tax to roughly 12 percent. That made tea available to a broader spectrum of society, which replenished the fortunes of the East India Company.” 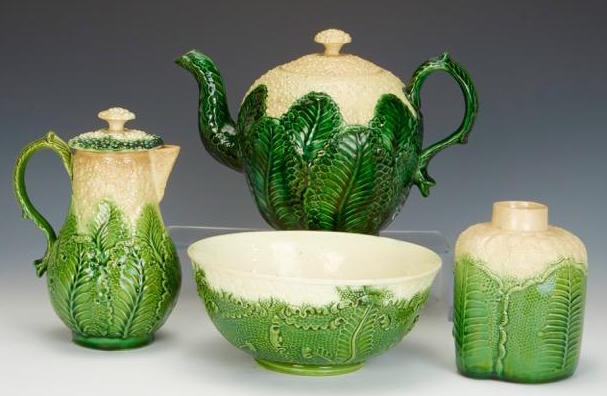 This collection of Staffordshire cauliflower ware, circa 1765, includes a Wedgwood teapot (top) and a tea caddy (right) attributed to William Greatbatch.

It also expanded the use of tea caddies. Now, in addition to porcelain from China glazed in blue and iron-red floral and figurative designs, tea caddies were made out of German porcelain, stoneware, Jasperware, creamware, and cauliflower ware, which was a type of creamware that was molded and glazed to resemble the vegetable. Tea caddies were made of Japanned papier-mâché and also wood, from chests to fanciful fruit forms—pears, apples, pineapples, and pumpkins were popular shapes. “They are my favorites,” Mark says. “I think the fruit forms are just the best. They’re totally charming, and when you hold them, they have a warmth that porcelain does not.”

The fruit forms also lack the provenance that most ceramic tea caddies enjoy. “There’s a real mystery to those pieces,” he says. “There’s no evidence of a manufacturer’s mark on them, which gives credence to the notion that they were homemade.” Less charming is the lead-lining inside the fruit form. “Using lead seems astonishing to us, but lead protected the tea from moisture.” 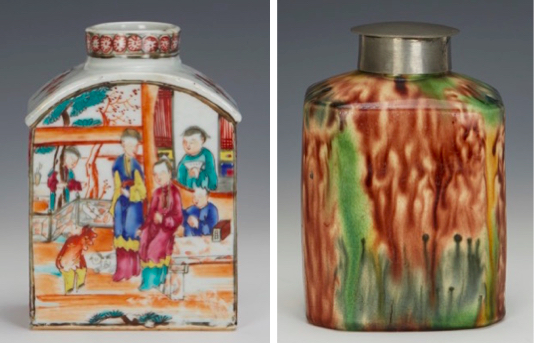 Two examples of colorful caddies: At left is a China export, circa 1785, featuring a traditional scene. At right is an English creamware caddy from 1765-75 with an abstract design.

With more than 400 tea caddies safely ensconced at the family home on Maryland’s eastern shore, and now a book making a virtual version of the collection portable, you’d think Mark Bramble’s appetite for tea caddies would be sated, but you’d be wrong, especially when it comes to tea caddies from around the time of the Boston Tea Party.

“Last week, I stumbled upon a tea caddy,” he says. “It was a green tortoiseshell piece from the late 18th century, very beautiful. The colored tortoiseshells were created by painting on the base material and then applying a clear overglaze on top, so that the color really comes through. I’m giving myself that piece for my birthday.”

(All photographs by Benny Cuppini. If you buy something through a link in this article, Collectors Weekly may get a share of the sale. Learn more.) 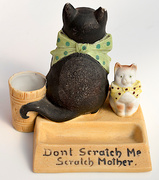 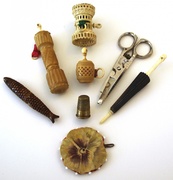 Royalty, Espionage, and Erotica: Secrets of the World's Tiniest PhotographsWhen the World Truly Stank, Tussie-Mussies Were a Breath of Fresh Air

Tea CaddiesWhether they were made of porcelain or pewter, exotic woods or sterling sil…