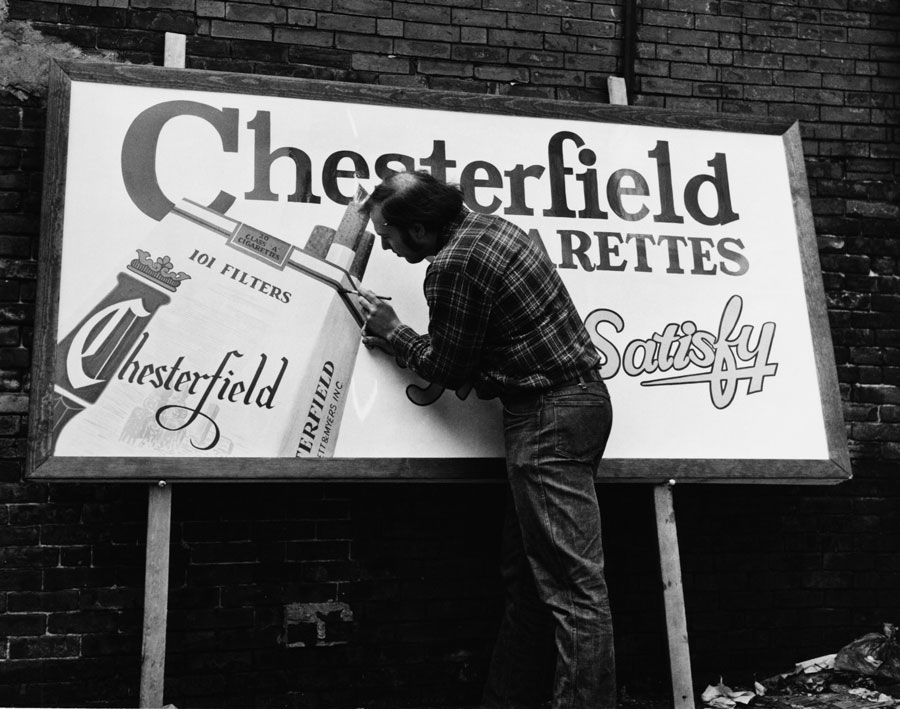 Now that anyone with Photoshop can pretend they’re a graphic designer, the art of signage has lost its luster. But before cheaply made vinyl banners took the heart out the sign industry, hand painting billboards and shop windows was a highly valued skill, and literally the only way to go.

“Vinyl plotters allowed all of these people to open shops that put out terrible signage.”

In any urban area, remnants of this bygone era still cling to the brick facades of older buildings, faded ghost signs advertising products and companies lost to time. Their handsome lettering and eye-catching graphics survive as the legacy of each sign painter, who acted as designer, marketing director, artist, and contractor, all in one.

For most of the 20th century, nearly every business hired sign painters to attract new customers with their skillfully arranged lettering and images, whether painted on a billboard, window pane, or the side of an old barn. Then in the 1980s, automated cutting plotters began flooding the market. These devices printed lettering onto sheets of adhesive-backed vinyl that could be applied to lighted signs, windows, or even the sides of vehicles. 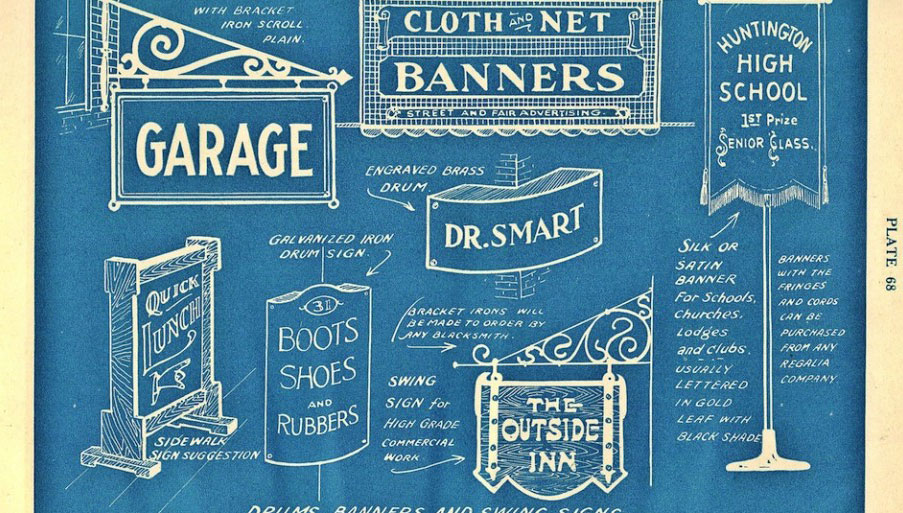 With this one technological shift, the world’s signage was forever altered, since it was both cheaper and faster to print a vinyl version rather than to have a painter create a personalized design. The great majority of sign production switched to vinyl (picture the infinitely bland signs hanging in strip malls across America), and has remained that way ever since.

But sign painting isn’t a lost art; in fact, according to filmmakers Faythe Levine and Sam Macon, it’s actually having a small renaissance. For their recent documentary film and accompanying book, both titled simply “Sign Painters,” Levine and Macon scoured the country to meet folks who still paint signs by hand. The duo was genuinely surprised by the variety of painters they encountered, as well as how many newcomers to the field are dedicated to carrying on this overlooked art form.

We recently spoke with Levine about her eye-opening exploration of the sign-painting industry. 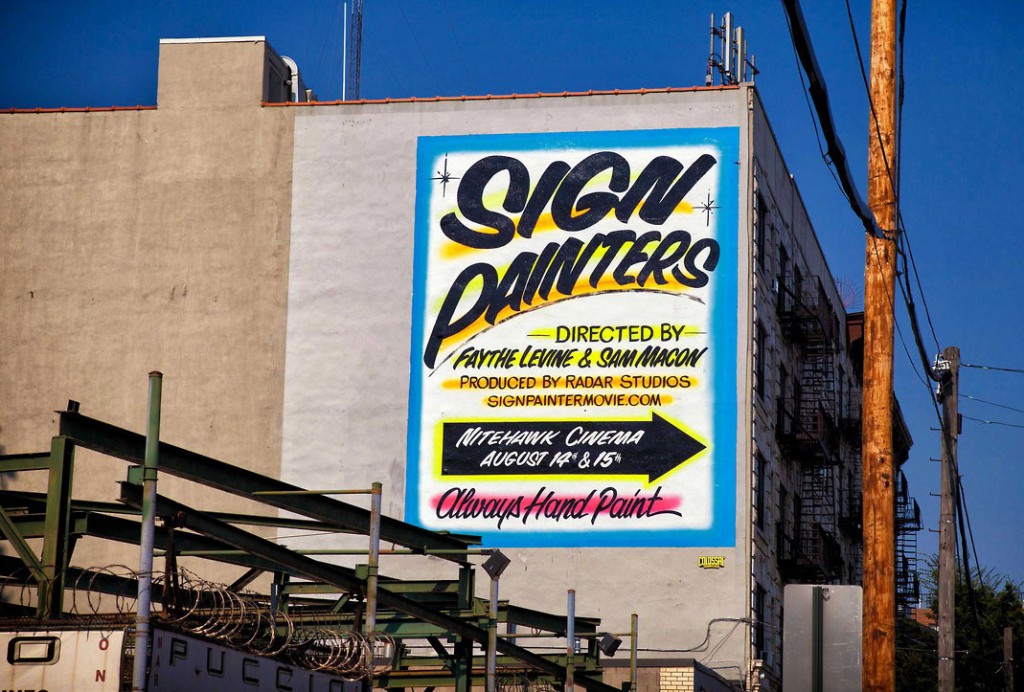 A billboard in Brooklyn painted by Colossal Media announces the release of Levin and Macon’s “Sign Painters” documentary. Via colossalmedia.com.

Collectors Weekly: What first attracted you to sign painting?

Faythe Levine: This project has its roots in Minneapolis in the late ’90s. I was friends with a group of artists in a neighborhood that was dominated by one person’s signs, this guy named Phil Vandervaart, who’s in the book and the film. My friends started hanging out at Phil’s shop, so that was my first entry into the industry, to even knowing that there were jobs for sign painters.

I was already interested in letters and signage, and after I finished my first film, I was surprised that there wasn’t more information about sign painting online. So I approached my co-director Sam, and we just jumped in, starting with that group of friends I knew from Minneapolis. Several of them had actually gone on to open sign shops around the country. 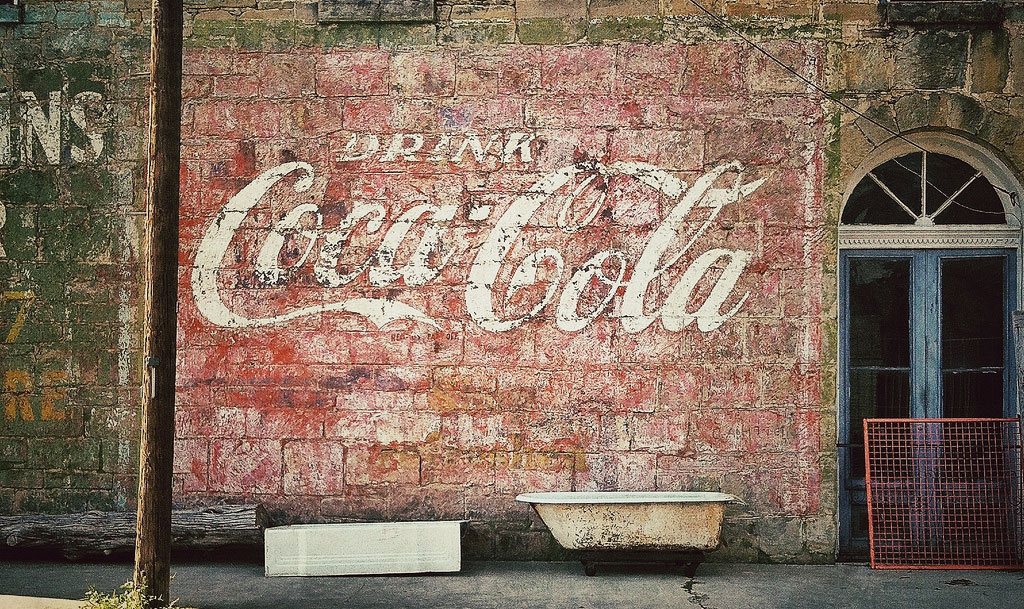 The sign industry originally branched out of branding and badging products in the late 19th century. The sign painter became the go-to person, because there were no advertising agencies then. Some legendary, iconic logos that we all know, like the ones for Ford and Coca-Cola, were designed by a sign painter. That’s how significantly this industry defined how our urban landscape looked and how we digest advertising. 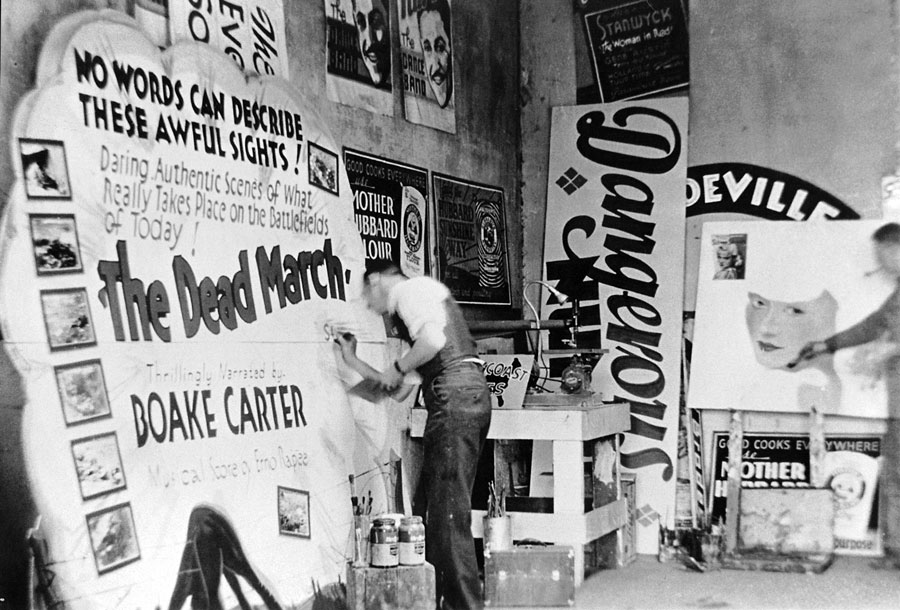 Painter Chauncey Curtis works on a film advertisement for a theater in Mankato, Minnesota, in the 1930s. Courtesy Faythe Levine and Sam Macon.

Collectors Weekly: What makes a sign most appealing to you?

Levine: I think my answer to that would’ve been different before working on this project. Aesthetically, I’m definitely drawn to what would be considered “folk signage,” now that I know what I’m speaking about. My personal definition, which is not true for everyone, would be signage created by someone who’s self-taught, and not trained in design or layout or the “correct” way to paint, not like a journeyman sign painter. 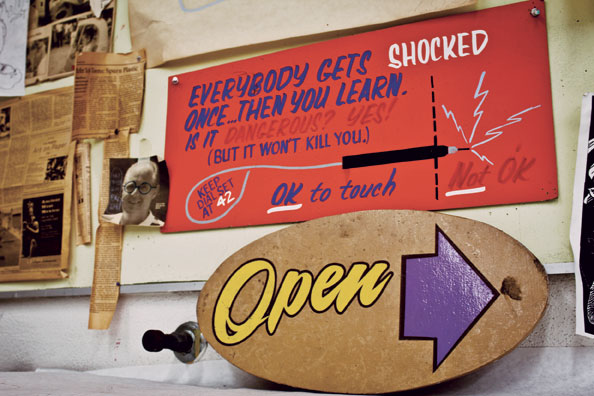 Collectors Weekly: Do most painters learn their craft through a trade school?

Levine: A lot of the older people did, but we also met many who were self-taught or did an apprenticeship at a sign shop. We even met people who learned to paint signs in prison. In the past, you could learn the trade through textbooks or union schools, but younger sign painters today learn mostly through apprenticeships. There’s one trade school left, the Los Angeles Trade Technical College (LATTC), that offers a sign-graphics program, where you start with a pencil and you end with the most up-to-date computer skills, but in between that, you learn to do all the lettering with a brush. 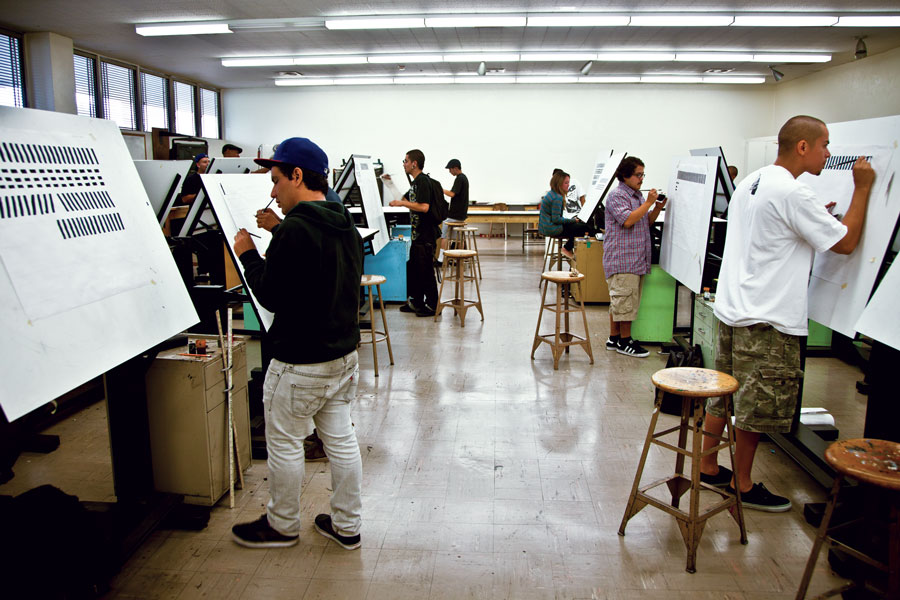 A classroom at LATTC, one of the last remaining schools that offers a program in sign graphics. Courtesy Faythe Levine and Sam Macon.

For sign painting, lettering is referred to as “alphabets,” not fonts, and traditionally, you would learn a couple standard alphabets right away in a technical school and then you would go from there. For anyone who’s interested in sign painting, Justin Green’s comic strips are one of the best sources of industry terminology and tips. It was originally part of a monthly column for “Signs of the Times” magazine, and was later published as a book called “Sign Game.” 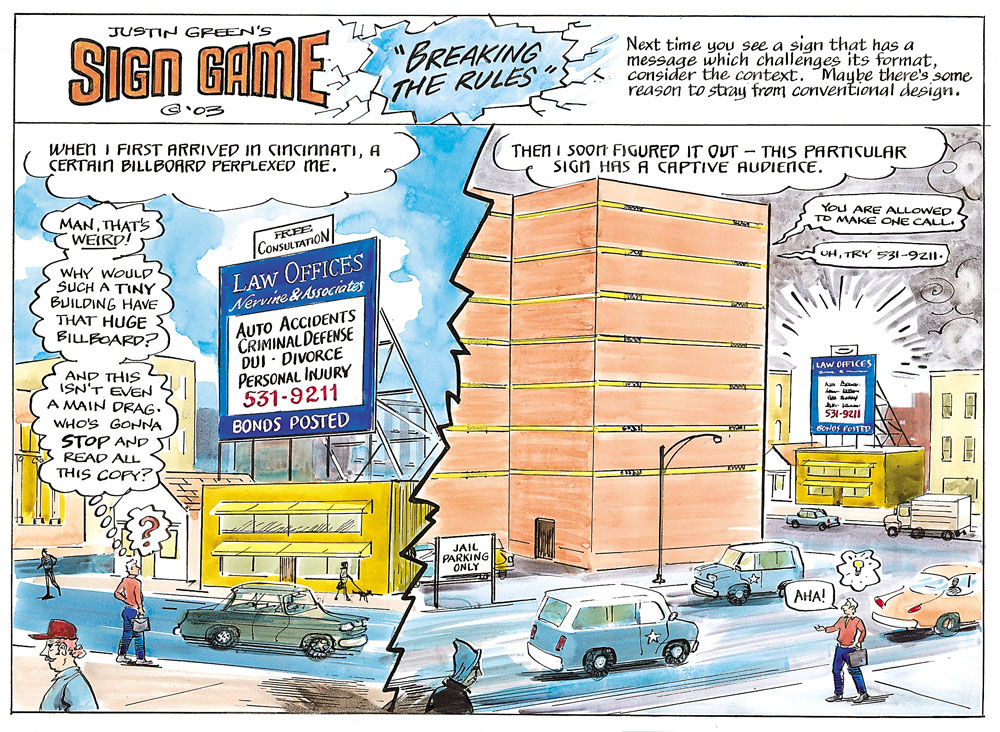 A spread from Justin Green’s “The Sign Game,” which suggests that the rules of sign painting should be bent in unique situations, like near a city jail. Courtesy Justin Green.

Collectors Weekly: Why are apprenticeships such an important part of the field?

Levine: It’s the last way to get access to this trade. When people use the word apprenticeship, historically, it was very formal. People who are doing formal apprenticeships today will usually let you know because they’re putting in some serious time. But most people tend to use the term more loosely, including close mentoring in the same category.

We found that most of the older generation of sign painters, who’ve put in anywhere from 15 to 40 plus years in the industry, are so excited that young people are interested in learning their trade that they’re actually inviting them in. That was not the case at the height of the industry: People were very protective of their tricks of the trade because everyone else was competition. Being a sign painter was like being a plumber—you had to hustle.

I think that dynamic has really shifted, and it’s awesome because now enough people are staying with it and keeping these skills alive. It’s not going to die out. It’ll never be the industry it once was, because financially they can’t compete with Inkjet printing and vinyl plotters. But there are enough people who have a passion for hand-painted signs that the tradition is absolutely going to continue.

Collectors Weekly: How did the invention of vinyl signage affect the industry?

Levine: In the late 1970s and early ’80s, the first vinyl plotters were introduced. They were initially marketed toward sign shops to eliminate the repetitive bench work of doing a hundred “For Sale” signs or basic things like that. You had to buy the software for each individual alphabet, so a lot of shops would share their alphabets because they were very expensive. I think some sign painters also found it useful for doing window work, for cutting letters that adhere to windows. It seems that those in the sign industry had very mixed opinions about it. 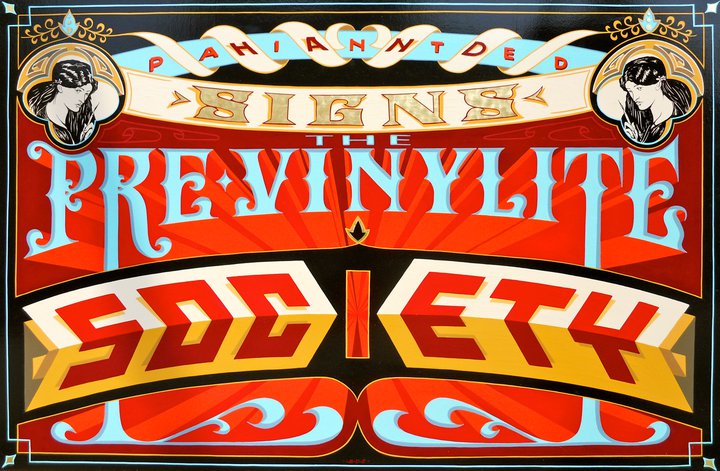 Josh Luke’s design for the Pre-Vinylite Society’s logo. Via previnylitesociety.tumblr.com.

Vinyl plotters allowed all of these people who were not trained within the industry to open shops that put out terrible signage. The copy would be scrunched into the wrong space, and no thought was given to the design of the sign. Things really spiraled out of control, because most sign painters couldn’t compete with the prices, so they put down their brushes and went to vinyl or reinvented themselves within a different industry. 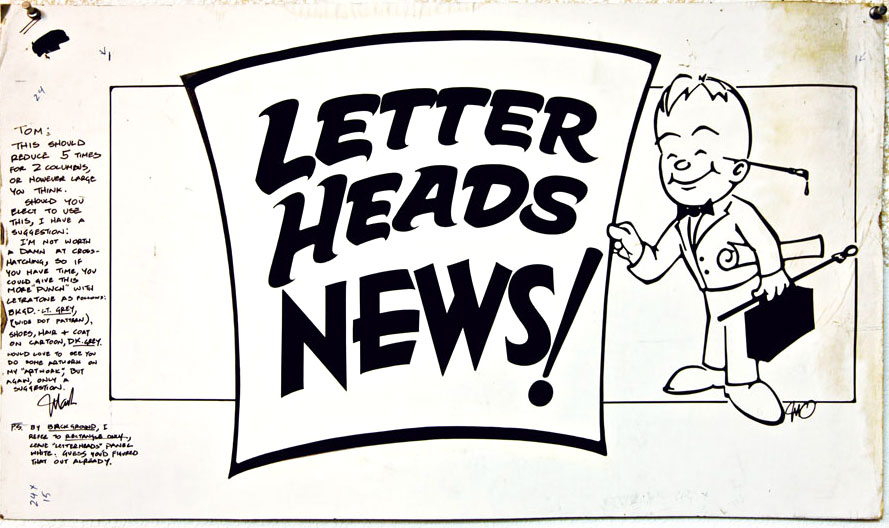 Levine:  It’s similar to a group that was formed in the ’80s, called the Letterheads, which was mostly younger people who were interested in old-school sign-painting techniques, and sharing these little tricks, brushes, and materials that longtime painters had figured out worked well. In that way, the Pre-Vinylite Society is about encouraging an appreciation for hand paint. Check out founder Josh Luke’s website for more information.

After vinyl plotters took over, we had this generation gap where people running small businesses didn’t know that hiring a sign painter to do a quality sign that reflected their business was even an option. What we’re seeing right now is that entrepreneurs know there are painters available, and they’re starting to hire them again. That’s been awesome to watch happen over the course of our project. For example, out in San Francisco, you have New Bohemia Signs, which is a great example of an accessible shop that is cranking out a lot of work. 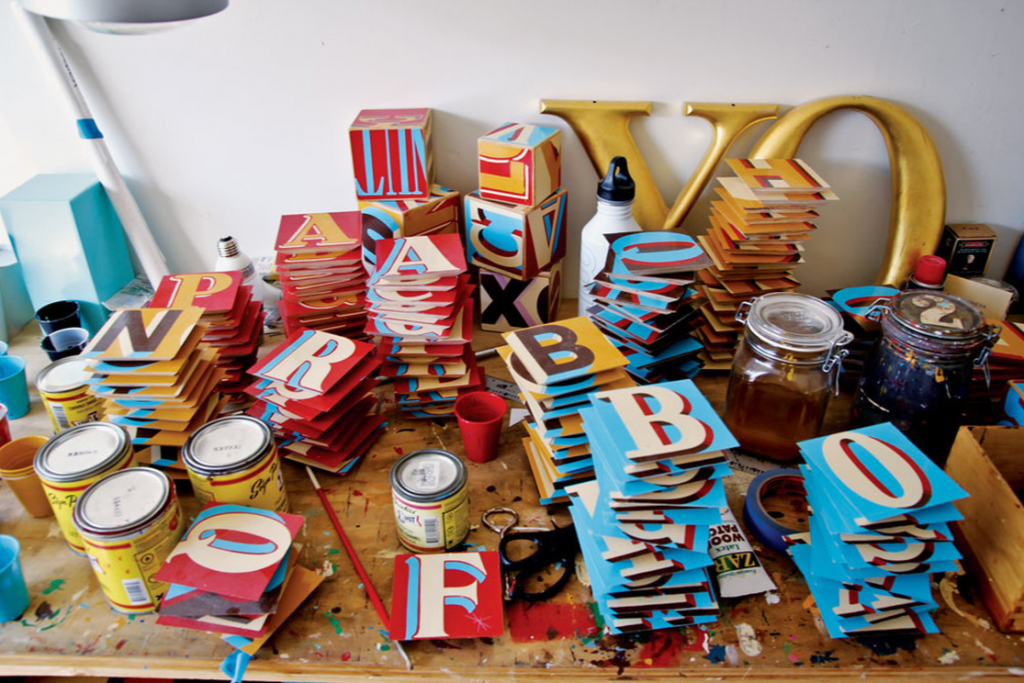 Levine: I think a lot of new business owners are opening stores or restaurants that have specific ideals behind sourcing their products locally, or selling handmade and organic goods, so having signage that reflects the store’s mission is important.

But you don’t necessarily need an old-timey look to get a painted sign; these signs can be very contemporary and modern. Now that businesses have started realizing that, it’s expanded the market for sign painters. We’re even seeing a lot of very large companies starting to hire sign painters again. The Gap did a whole marketing campaign with hand paint. I know John Fluevog, the shoe company, has hired sign painters recently to do its stores. Whole Foods brought in Doc Guthrie, one of the sign painters we worked with, to teach its designers to do chalkboard signage correctly.

Right now, it seems like we’re at a stabilizing point: You see people who are learning the traditional hand-paint methods but also using new technology in the mix, and older sign painters are doing that as well. They might take a design from a client and put it into a computer program to manipulate the design by blowing it up or scaling it down to make a pattern. Not everyone is anti-technology, though you do have a lot of painters who are going to do everything with a pencil first and foremost.

A well-preserved ghost sign for Bull Durham Tobacco from the late 19th century was recently discovered in Goliad, Texas. Photo by Molly Block.

Collectors Weekly: Is the revival of hand-painted signs part of this larger trend for artisan, hand-crafted culture?

Levine: Personally, I would say yes. I think that today more people want to know where their eggs come from. People are interested in their jeans being manufactured within the same region as where they buy them. I think hand-painted signs are part of this larger change, but I also think that there’s another audience that’s into design-related things. I think when people like designers and typographers have access to the history of hand paint, they just eat it up.

Frank Atkinson’s classic manual of sign painting was first published in 1909, and updated six times by 1991. Via graphicology.com.

Collectors Weekly: Do you have a favorite painted sign where you live?

Levine: My favorite painted sign in Milwaukee got sandblasted about five years ago. Oh my gosh, it was so beautiful. It was on a five-storey Cream City brick building, this type of light-colored brick from a nearby quarry. And the sign was a beautiful, giant, bizarre-o ’70s rainbow, like this faded bubbly rainbow. I don’t even know what it was advertising. I think the building was just a storage space. Luckily I got a picture of it before they sanded it away for no reason. 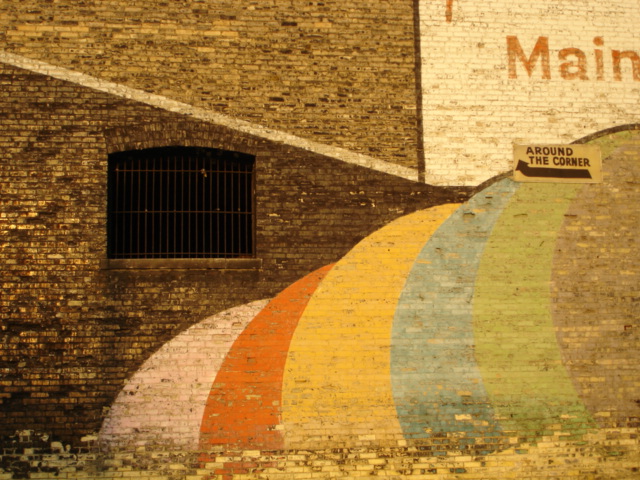 (Thanks to the “Sign Painters” team, Princeton Architectural Press, and Molly Block.)