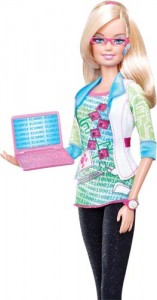 A few weeks ago, we blogged about a Barbie benefit on eBay, in which a dozen one-of-a-kind Basic Barbies were accessorized by some of the top fashion-accessories designers in the world. Proceeds went to the Council of Fashion Designers of America’s educational initiatives and scholarship program.

That was last week. This week’s Barbie news is the announcement that the doll’s next career (she’s had 125) will be as a computer engineer (available in November, 2010). Described by Mattel as geek chic, the doll’s outfit features a binary-code t-shirt and black knit slacks. Accessories include a Bluetooth earpiece, pink laptop, and hi-tech wristwatch. No word yet if empty pizza boxes and a stack of soda cans will also be available for this new engineer’s cubicle.