Barbie Gets Dolled Up For a Good Cause (Starting Jan. 28th on eBay)

As anyone who follows vintage Barbie dolls on eBay knows, rare examples in good condition from 1959 or 1960 regularly go for $1,000 or more. 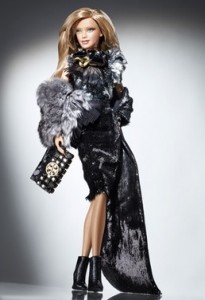 But that may be small change compared to the special Basic Barbies benefit auction eBay is holding this week, in cooperation with Mattel and the Council of Fashion Designers of America. From January 28th through February 7th, eBay visitors will get to bid on 12 one-of-a-kind Basic Barbies, which have been individually customized and bedecked by a prominent accessories designer. That’s right – they outfitted one single doll each – an instant collectors item.

This isn’t the first time Barbie has rubbed plastic shoulders with fashion’s finest. In 1990, the Mattel icon began a 20-year relationship with Hollywood’s Bob Mackie, whose first, limited edition “Gold Barbie” was clad in a revealing gown made with 5,000 hand-sewn golden sequins. Most recently, in 2010, Parisian Christian Louboutin squeezed Barbie into a slinky black cat suit, providing four pairs of his famous shoes to go along with this Bond-girl outfit.

In some circles, Barbie’s most famous brush with contemporary design occurred in late 2005, when contestants of “Project Runway” were challenged to create a look for the legendary doll. The winner of that challenge, though not of that season’s competition, was Nick Verreos, whose brightly colored, summery dress was recreated for the My Scene Barbie collection in 2006. 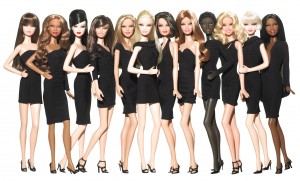 This new CFDA collection promises to be among the most entertaining and inventive collaborations between toy and talent yet. For example, Tory Burch put her Basic Barbie in blacks and gray—from her ankle boots to the logo’ed clutch in her hand—for a lavish night on the town.

Justin Giunta of Subversive Jewelry took a different approach, wrapping his doll in miles (okay, yards…) of chain and pearl necklaces, layered one on top of the other until the little black dress underneath is almost obscured. But then, after all, the accessories are supposed to be the stars of this show.