This article on the Sandwich Glass Company’s glass candlesticks, made in the mid- to late 19th century, focuses on the production processes, the designs’ inspiration (Venetian glassblowers), and the various colors and styles that were most available at the time the article was published. It originally appeared in the December 1937 issue of American Collector magazine, a publication which ran from 1933-1948 and served antique collectors and dealers.

The dolphin candlestick and its various half brothers, the fluted column, the loop-and-petal and the baluster, have been popular with collectors for many years. They have been sought in all variations of form and color and one would expect a well-annotated family history had long since been compiled. On the contrary, in the literature of American glass one finds only occasional and brief references to these distinctive and decorative candlesticks. 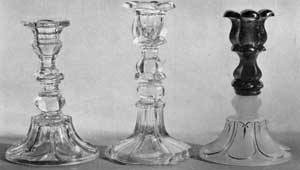 That they were first produced at Sandwich seems certain, although it is known that some of the later designs, such as the bell dolphin type, were made by western factories, particularly those of Pittsburgh. It is also possible that after the Boston and Sandwich Glass Company had established a popular market for them, other eastern producers of pattern glass copied these types of candlesticks so carefully, in both color and design, that it is now almost impossible to identify those that did not originate at Sandwich.

In support of the statement that the production of the dolphin and related candlesticks began at Sandwich, fragments of these various designs have been retrieved from the site of this Cape Cod factory and from the same excavations that yielded some of the earliest of known Sandwich patterns. Among these fragments are colors for which perfect examples are unknown. An example of this is a dolphin design in a delicate orchid shade.

Sandwich origin is further substantiated by the fact that most of these candlesticks when discovered in their original habitat have been found with other pieces of typical Sandwich glass. Similarly, practically none of the dolphin and other designs, except those known to be of the later types, have been located in the middle west which was the primary market of the Pittsburgh factories.

Production of the dolphin and related types began about 1840 and continued for approximately 35 or 40 years. In their making the molten glass was, of course, cast in carefully cut two-piece iron molds and, where contrasting colors of glass were used for base and top, there must have been separate molds for these parts. 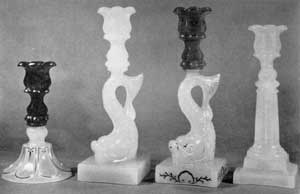 The Three Principal Designs: Left to right, the Loop-and-Petal; the Dolphin; and the Fluted-Column. Two show original applied gold leaf decoration. Many specimens have lost this through repeated washing.

Study of such examples shows that the top and base were fused together while the glass was still hot enough to be plastic. This is further borne out by the fact that sometimes these two-color candlesticks separate at the point of fusion under pressure or a slight blow.

It is generally conceded that the various shades of transparent and opaque glass do not represent different periods of production but reflect the conscious effort of the Sandwich factory to offer the public as many variations of color as possible.

As one examines these dolphin, fluted and six-sided column, baluster and loop-and-petal designs, it becomes apparent that they were probably more carefully executed than some of the other products of Sandwich. Instead of the rough edges characteristic of some of the work of this factory, all the candlesticks I have examined are so smooth as to indicate that they were “fire-finished,” that is, reheated before being sent to the annealing lehr for the gradual process of cooling.

Of those pressed glass candlesticks of the dolphin and related patterns made elsewhere than at Sandwich, the petticoat dolphin design was beyond question produced at Pittsburgh. There, Bakewell Pears & Co. made various pieces of glass in which the supporting member between the base and top was a dolphin. The base was bell-shaped as with the petticoat dolphin candlesticks. A fine example is that very rare bell flower compote that has a bell base, a dolphin support and the dish in the form of a scallop shell. Possibly this type of dolphin candlestick originated with this company. It was made in several shades of clear glass but always with an opalescence that is most marked at the top. 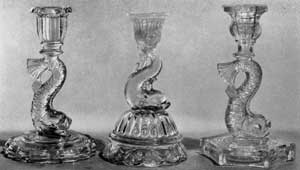 Three Later Dolphin Designs: Left, with circular base; center, a petticoat type from Pittsburgh; and right, with six-sided base.

Just when Bakewell Pears & Co. first produced dolphin pieces is not known; but by 1868 their chief Pittsburgh competitor, McKee & Brothers, had launched a similar design. In their catalog of that year is shown a small dolphin candlestick with a round base and another of the six-sided baluster design which they designated as “Boston candlestick,” possibly an unintentional tribute to the Boston and Sandwich Glass Company as the originators of this type. The prices quoted are dolphin candlesticks, $6.75 a dozen, and $7.50 for the other design. Also, I have seen a loop-and-petal candlestick of standard height in canary yellow glass that was made at the Portland, Me., factory.

Regardless of where these various types of pressed glass candlesticks were first produced, one must go further afield for their inspiration. Although not generally recognized, that for the dolphin was taken from the fine examples of blown glass produced by the Venetian craftsmen. With these workmen the use of a delicately blown dolphin as the decorative treatment of the member between the base and top of a piece of glass was a favorite before the beginning of the 19th Century. In fact, present-day glass blowers of Venice still make candlesticks, compotes and other pieces with the dolphin motif.

Where the supporting shaft was a column, the fluted Ionic type seems to have been the most popular, judging from the number of examples that have survived. There were a number of variations, some with square bases and others with six or eight sides. Here the inspiration is readily found in the silver and Sheffield plate made in England and the United States, beginning with the classic influence of the Brothers Adam, and in the candlesticks made by various English potters such as Wedgwood.

The loop-and-petal appears to have been merely a Victorian style. There are no indications that it reflects any earlier design executed in some other material. 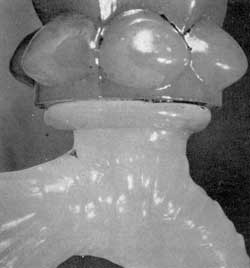 Detail of Joining of Two Colors: A characteristic of original examples is this slight irregularity where the two shades of opaque glass were fused. Modern copies lack this characteristic.

There are two types of dolphin candlestick, those with a single square base, believed to have been the earlier, and those with a double base of two squares arranged step-like. The single base dolphin is 9 3/4 inches tall; that with the double, 10 1/2 inches tall. They were made in clear glass, canary yellow and amber. In the opaque glass they were made in milk white and combinations of a base of this color and tops of turquoise blue and jade green. Occasionally opaque glass dolphin candlesticks are found with the top decorated with small dolphins executed in low relief.

Other types of the dolphin design, usually seven inches tall, are those with a circular base, a scallop circular base, a six-sided base in which the sides are equal arcs, and the petticoat already mentioned. These were made in clear glass, canary yellow, vitriol blue, and opaque with a milk white base and turquoise blue top.

Candlesticks of column design were made in clear glass and various tints. The fluted column type had the greatest range of colors. These with the double base are 9 1/2 inches tall and come in clear and canary yellow glass as well as in the opaque. With the latter the range of colors includes all milk white, all turquoise blue and all indigo blue shot with flecks of silver, and various combinations with milk white base and column varying from turquoise to a deep blue, as well as some in which the top has a faint yellow cast.

Bases of Original Candlesticks: Left to right, a fluted-column candlestick that is hollow the length of base and column; center, a loop-and-petal design showing roughness where pontil rod was, affixed; right, a single base dolphin design. In the copies of the latter the open space within the dolphin head is wider and noticeably deeper.

Loop-and-petal candlesticks are always seven inches tall and are found in clear, canary yellow and shades of green as well as opaque glass. Color combinations include all milk white, all dark blue shot with silver flecks, a milk white base combined with tops of turquoise blue, jade green and a delicate yellow. Some have the petal form top; others the six-sided, more frequently used with the baluster type; and still others have the petal top combined with the six-sided baluster base. These variations are generally found in clear glass colors but sometimes occur in the color combinations of opaque glass.

The standard baluster design, likewise seven inches tall, comes in clear glass, shades of yellow, green and blue, and the various combinations of the opaque with milk white base.

Art GlassArt glass sprang from a revolution in glassmaking in the mid-1800s, when gl…