This article notes the toys popular among 18th-century children, especially focusing on dolls and describing the different variations that were available. It originally appeared in the March 1943 issue of American Collector magazine, a publication which ran from 1933-1948 and served antique collectors and dealers.

With children of early America, deference to parents and other elders and unquestioning obedience to those in authority were of prime importance. George Washington’s mother kept a bundle of peach branches in her pocket to be used as punishment for offences against her ironbound rules. Deportment was taught at school and at home and formality existed at all times. Courtesy was a duty and children were silent before grown-ups. When addressed by them, a bow before speaking was the proper response. The young were taught that it was a sin to complain about meals, clothes or tasks. There were many of the latter for each child to perform, according to age and sex, for families were large. 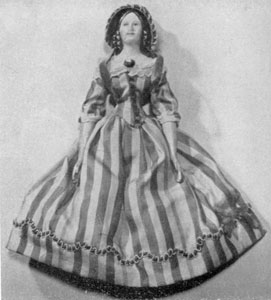 From the Second Quarter of the 19th Century: This doll has a papier-mâché head, a kid body, and wooden arms and legs. Its total height is 9 1/2 inches. The dress is of green and cream striped satin.

But despite rigid discipline, daily chores, and long school hours, children, then as now, were full of gay spirits and playfulness. Singing games, such as “London Bridge,” “Little Sally Water and Oats,” “Peas, Beans and Barley,” and “Blind Man’s Buff” were favorites. For toys they ingeniously used the everyday things around them, corn cobs for log houses and doll’s bodies; corn kernels as counters for checkers, for “Fox and Geese,” and “Geese and Hull Gull, How Many.” In the forests they found elder from which pop-guns were fashioned; hemlock for bows and arrows; and chestnut and willow for whistles.

A boy’s pride was his Barlow knife with which he learned at an early age to whittle and carve skillfully. The flying of kites, playing at taws (marbles), swimming (though it was under the ban in many places), hop scotch, trundling hoops, spinning of tops and teetotums (dice-like tops) were enjoyed by American as well as European children. The occasional visits of itinerant peddlers were looked forward to, since in addition to their supply of ribbons and rock candy, they also vended equipment for favorite games as well as little books. 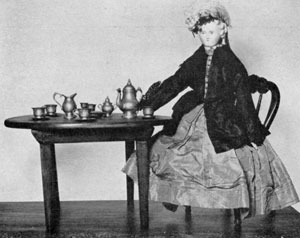 An American Doll of 1867: That was the year when she was won at a fair by a small boy. In disgust he banished her to the attic, so this doll with kid body and bisque head has survived in perfect condition. The original period dress of black and white silk is trimmed with royal blue, the same color as the coat. On the miniature table is a pewter tea set.

The favorite plaything of little girls since archaic times has been dolls, the crude, homemade ones as much beloved as the dimpled, round faced imported beauties. The current exhibition in the Museum of the Daughters of the American Revolution which will continue to April, displays over thirty antique dolls. Known as “Childhood in Early America,” the keynote of this exhibition is a fine portrait of ten-year-old Mary Lightfoot and her doll, painted in 1760 by the English born artist, John Wollaston, and recently presented to the Society by Herbert Lee Pratt of New York.

John Wollaston, son of a painter, began working in America in 1751 and continued to paint in New York and Philadelphia for eighteen years. He also traveled through the South and so painted members of many notable families in Maryland and Virginia. For instance, he was the only artist, so far as we know, who did a likeness of Martha Custis as a young woman. The Custis children were also among his sitters. His characteristic puffy hands and slanting eyes are apparent in the portrait of the Lightfoot child. 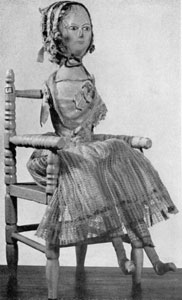 Doll of Early 18th Century Origin: Although the arms are missing, the painted face with narrow china blue eyes and red cheeks is as fresh and colorful as when this doll was new. The original dress has been replaced by a l9th Century one complete with pantelettes.

This little girl, child of wealthy plantation owners in tidewater Virginia, became the bride of William Allen five years after she sat to Wollaston. She died at thirty-nine, leaving several children. In the portrait, like all little girls of the mid-18th Century, she is dressed like the women of the period in a fine silk gown with thread lace ruffles at her elbows and around her décolletage. Her dress extends to the ground and is very full. She is encased in linen stays and possibly wears the wooden busk board which often went up the front of this garment. No wonder she has dignity! Her doll, too, is meticulously dressed in mid-18th Century hair-do and gown with a Watteau pleat down the back.

The D.A.R. collection of “fashion babies” is said by dolls collectors to be a good one, though it has several important omissions. Beginning with some Indian dolls and a wooden Queen Anne doll with egg-shaped head, the puppets progress chronologically to a little blonde French lady by Jumeau with complete wardrobe of the outlandish bustle period. For, of course, some dolls were made as fashion models and became playthings only when their garments were outmoded.

Most of the dolls reflect prevailing fashions and that is one way to date them, as well as to study historic costume. Before the second half of the 19th Century, dolls wore flat shoes; those with heels came later. Queen Victoria had blue eyes and therefore from her time on, blue-eyed dolls were the fashion in England and America. The brown-eyed ones were sent to Spain and other Latin countries. Baron Stiegel is reputed to have manufactured glass doll eyes in his Pennsylvania houses. 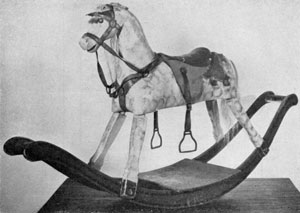 A Rocking Horse Made After 1860: Painted a dapple grey, it is complete with saddle and bridle of the period and is an excellent example of the larger toys of the period.

Most of the early doll heads were imported and were often attached to home-made bodies. Arms and legs were frequently of kid and were much cruder than the heads. Material for the latter, after the early wooden period, included wax, composition, papier-mâché, china, parian, and bisque. In many the hair was modeled as part of the head.

Jenny Lind’s popularity brought in the fashion of black hair for dolls, in imitation of the great singer’s sable colored wig which she wore for her concert performances. One of these black-haired china dolls is shown in the exhibition, as well as a wax one with long curls of real hair which has survived two Johnstown floods and still smiles.

Also on display are a number of early text books, including two of the rare New England Primers with their crude woodcut illustrations. An early edition has for the alphabet doggerel the familiar “In Adam’s fall we sinned all” for A; and for G and K, “As runs the Glass Man’s life doth pass” and “The British King Lost States Thirteen.” Then there are little story hooks, not used in the schools, which children of long ago really delighted to read and could buy for a few pennies. They include such titles as “The Nosegay of Honeysuckles,” “The Widow’s Only Son or Narratives of Pious Children.” Stilted, highly romantic, and ultra moral in tone, they show how fashions in writing change as much as those in dress. 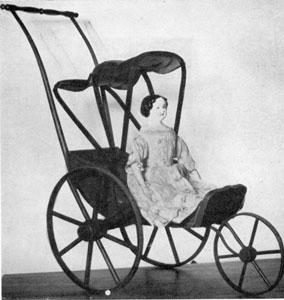 A Jenny Lind Doll: This is known to have been a gift in 1866. It has a German china head with blue eyes and black hair. The body is of kid. This doll is seated in a Joel Ellis doll carriage of the same period.

And, of course, no depiction of early American childhood should omit wearing apparel. This ranges from exquisitely embroidered christening gowns to the first knee breeches of small boys and the challis and taffeta off-shoulder frocks of little girls of the second quarter of the 19th Century.

For the first two hundred and fifty years, American boys and girls wore miniature versions of their parents’ clothing. Besides the confining stays, still severer methods were practiced to induce an upright bearing in little girls. That they accomplished their purpose is evidenced in the portraits of women and girls of the day.

Oddly enough, small boys wore dresses until they were six or seven. When they were graduated, first from swaddling clothes and then from petticoats, were occasions of great celebration. There was probably no prouder moment in a lad’s life than when he first appeared in a miniature version of men’s clothes. A black serge coat with velvet collar, covered buttons and a full skirt is among the exhibits and typical of what the well-dressed boy who had passed his seventh year wore. 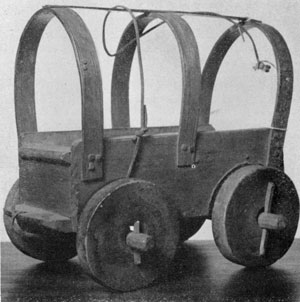 Jackknife Model of a Conestoga Wagon: A crude example undoubtedly made as a toy. It does not follow these wagons in all details, notably the solid wheel, boxlike shape of body, and too heavy bows for the canvas cover.

Children’s diaries and “commonplace” books of a century and a half ago reveal much, as do their letters. For instance in 1777, when John Quincy Adams was ten, he wrote his father as follows:

“Dear Sir: I love to receive letters very well, much better than I like to write them. I made but a poor figure at Composition, my head is much too fickle, my thoughts running after Bird’s eggs, plays, and trifles till I get vexed with myself. I have just entered the third volume of Smollet, though I had designed to have got it half through by this time. I have determined this week to be more Diligent, as Mr. Thaxter will be absent at Court and I cannot pursue my other Studies. I have set myself a stent and determine to read the third Volume half out. If I can but keep my Resolution I will write you again at the end of the Week and give a better account of myself. I wish, Sir, you would give me some Instructions with regard to my Time, and advise me how to proportion my Studies, and Play, in writing, and I will keep them by me and endeavor to follow them. I am dear Sir, with present Determination of growing better, Yours, John Quincy Adams.”

DollsPeople have made dolls for thousands of years for use as religious objects,…