Flashback: Cupboards for Dishes As Designed in America

This article describes cupboards crafted in the 18th and 19th centuries that are appropriate for shelving and showcasing dishes, glass, and other collectibles. It originally appeared in the December 1945 issue of American Collector magazine, a publication which ran from 1933-1948 and served antique collectors and dealers.

Fine silver, porcelain, glass, and similar household accessories lend themselves to display as well as use, and the householder of today is no different than his ancestor of seven or eight generations ago in wanting to show such items to the best advantage. 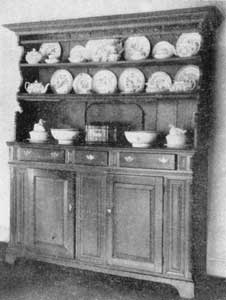 A So-Called Welsh Open Dresser: This walnut piece was made in Bucks County, Pennsylvania, circa 1750. The shaping of the end supports for the shelving is suggestive of furniture from the Austrian Tyrol, but the enclosed base with its arrangement of drawers and doors is American in planning and execution, as are the plain bracket feet.

“I have quite a nice little collection of Gaudy Dutch,” writes one collector. “It seems a shame to tuck anything so colorful away in a closet. Have been thinking of getting one of those secretaries with glass doors to put it in, but am not sure it would look right in a dining room.” 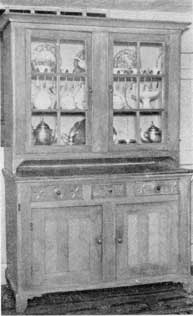 Pennsylvania Country Dish Cupboard: Made of pine approximately 1800 to 1825, decoration was gained by use of reeding and star and circle carving of face of the two larger drawers. Restoration showed that it was originally painted in Ammish blue.

If by secretary a desk with cupboard or bookcase top is meant, it decidedly would not look right in a dining room — or anywhere else if put to such use, since the cupboard part of such a piece was originally designed for storing books and similar things associated with the primary function of a desk. There is one exception of course: the break front or butler’s secretary.

The early colonists were limited in quantity of decorative tableware, but possessed fitting frames for displaying the few pieces they brought with them or acquired later. Storage closets being practically unknown, they fashioned pine cupboards and dressers according to the general designs of similar pieces left behind in the mother country. 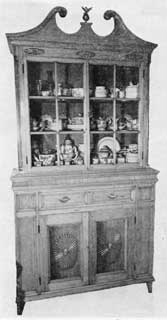 Architecturally Designed Dish Cupboard, Circa 1800: Of pine with finely carved sunbursts decorating door fronts and cornice, this piece was made near Nyack, New York. In all its details it is characteristic of work done in the upper Hackensack Valley by craftsmen of Netherlands descent.

On the open shelves of the upper part gleamed the cherished pewter and behind the closed doors of the lower section were stored household linens and less ornamental tableware. During the first century of American colonization dish cupboards were probably simple affairs, made by the local joyner from whatever wood was at hand, though none has survived.

Dish cupboards and Welsh dressers dating fairly early in the 18th Century, however, are to be found today and along with the corner cupboards and butler’s secretaries of the Federal and American Regency periods are in growing favor with collectors. Any of these serve the purpose for which they were made as well in the 20th Century as they did when their original owners first arranged their cherished dishes therein. 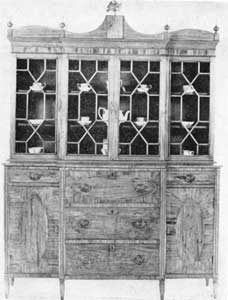 The Welsh dresser, forerunner of the sideboard, was popular throughout the 18th Century. Structurally the same, whether made in New England, Pennsylvania, or New York, its decorative detail and general proportions reflected the taste of the immediate area in which it was fashioned.

Also, since it was essentially a country piece, it was ornamentally in keeping with the wood trim of the room in which it stood. In fact the dresser prized by the 18th Century housewife had a shallow upper section with straight shelves relieved by scallop cutting of the enclosing sides and plain cornice. Sometimes the lower section had drawers below the serving shelf, like the example illustrated. They were entirely undecorated and the cupboard doors below had very simple paneling. 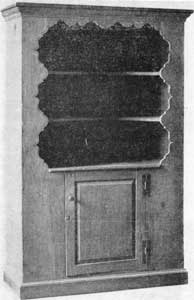 Open Pine Cupboard, Circa 1740: The cyma curved shapings of open front closely resemble those found on other American furniture of the William and Mary and Queen Anne periods, especially highboys. Notice the curved shape of the shelves and panel door with H hinges in the base.

Serving the same purpose, though roomier and more massive, were the dressers or dish cupboards of the Pennsylvania Dutch. With these, drawer fronts and door panels of the lower half were decorated with reeding and carved symbols peculiar to these German refugees of colonial years. The upper hall, though shallower, was also enclosed, but fitted with glass doors to permit the display of glass, china and the like. With the piece shown here, the upper shelf has a series of incisions along the outer edge for the hanging of silver spoons.

The corner cupboard was a natural development of these earlier pieces, was a more sophisticated piece and reflected changing furniture styles beginning with Chippendale and running through the Regency years. Like the dresser, it was in two parts; the lower a closet with solid door; the upper with or without a door. Architectural in form, the hemispherical curve of its display section with finely shaped shelves presented more beauty than capaciousness. 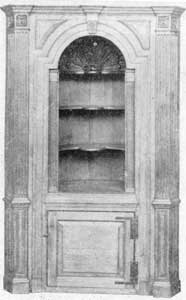 American Chippendale Corner Cupboard: Made of pine about 1765, this piece has a very fine shell carved dome, nicely shaped shelves, finely executed moldings, and reeded pilasters. It was an architectural piece of furniture of the period and probably was built into the corner of the room for which it was designed.

The break-front butler’s secretary was really the child of the simple Welsh dresser gone urban, with the added refinement of a desk compartment in the center lower section for keeping the household accounts. This piece of furniture was made in England from the Chippendale years on, but American craftsmen did not begin to make them until the closing years of the 18th Century. Further, they were large and expensive pieces, suited to large houses with capacious dining rooms. Obviously they were not produced in any great numbers and are as a result rare pieces today.

Merchant princes of Salem, Massachusetts, with wealth from the China trade pouring into their coffers could afford fine houses and the best of furnishings. So the Salem cabinetmakers made break-front secretaries along with other pieces. The secretary illustrated is one of several known to have come from the shops of these fine craftsmen. Such a secretary is perfect for displaying fine Lowestoft, Gaudy Dutch, Stiegel type glass, or similar collectibles, providing one’s dining room is large enough.