Today’s guest blogger is hand-fan collector Anna Checcoli, whose Ventagli.org is a member of our Hall of Fame. 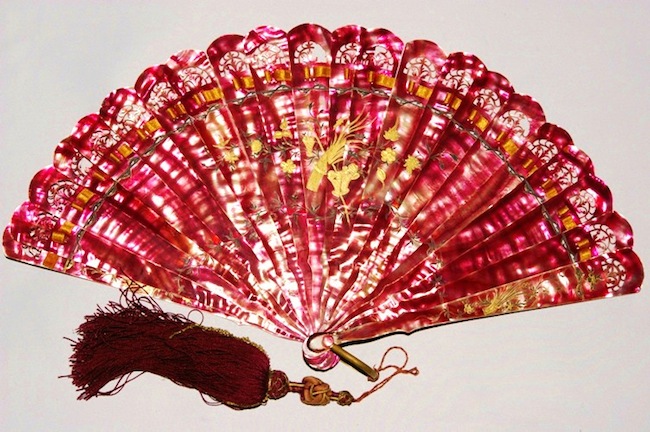 Many fan collectors have asked me how artists dyed mother-of-pearl fans. A collaborative article published on the FANA Forum in June, 2007, whose authors included Pierre-Henri Biger, Céline Louvet of the Mother-of-Pearl Museum near Paris, and Chuck Erikson, explained most of the techniques, which I summarize today. Other sources are cited below.

Mother-of-pearl coloring techniques are still quite mysterious because the holders of this know-how considered their techniques to be professional secrets. In general, though, we know that dyeing was practiced after shaping an object but before engraving, ornamentation, and polishing. Some processes required a double boiler, others techniques were performed cold in large stoneware jars. The mother-of-pearl would steep in pigments or corrosive products such as ammonia—the length of time depended on the desired colors. For clear colors, it was necessary to bleach the mother-of-pearl first with diluted hydrogen peroxide, as if you were coloring hair. 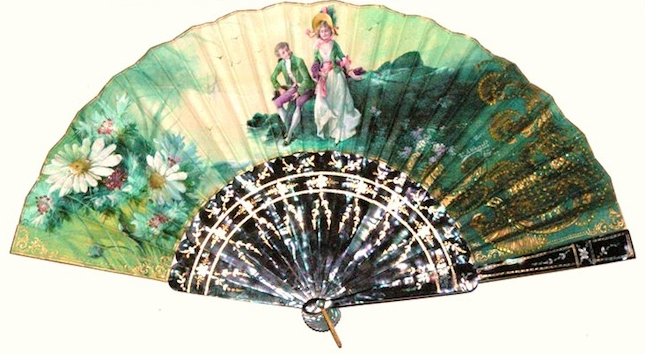 One of the most successful mother-of-pearls was, and is, “nacre d’ Orient,” also called “Goldfish.” In Spire Blondel’s 1875 “Histoire des Eventails,” we read of a certain Mr. Meyer, who patented a process to dye fans of this material. Meyer had a way of cutting into the surface of a shell to make it iridescent without altering its natural colors.

Other methods of coloring nacreous shell include silvering, in which silver leaf and gum water was mixed, ground, and then applied to the insides of shells. Gold colors could be achieved by substituting gold leaf in the same basic recipe, or gold powder could be produced by mixing gold leaf and gum water with honey before grinding and drying. B. Frank Van Cleve’s 1874 “The English and American Mechanic” describes mixing the resulting powder with gum water or isinglass and then applying it by wrapping a soft piece of leather around the finger, dipping it into the powder, and rubbing the shell. 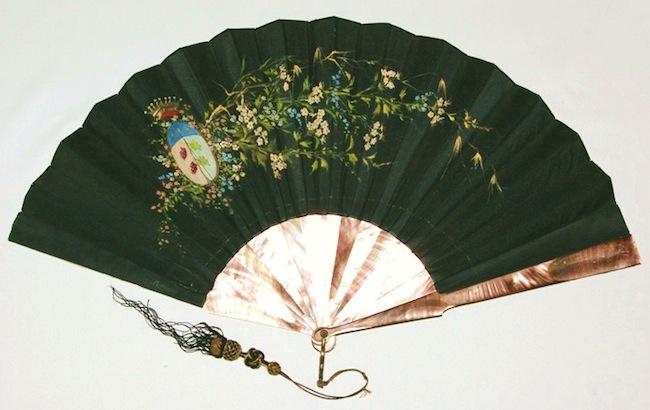 According to “The Techno-Chemical Receipt Book” written in 1886, mother-of-pearl could also be dyed with aniline colors—if the dye was intended to penetrate deep into the shell, the pieces needed to remain in the coloring matter for two weeks. William B. Dick’s “Encyclopedia of Practical Receipts and Processes” from 1903 offers advice on working with lac dyes: boil the dye, allow it to settle, then dissolve in a solution of chloride of tin before dipping the shells in the preparation until they are of the desired color.

Finally, to achieve iridescence, the “Scientific American Cyclopedia of Formulas” from 1910 offer a process said to be the same one followed by Viennese button makers. Fill a wide-mouth jar with ammonia water and add powdered silver chloride until the liquid becomes saturated and a slight excess of the silver salt is established. Put the shells in the jar, cover it with a glass stopper, and set it aside in a dark place for a few days. The play of colors is usually established in a few hours, but its permanency is assured by one week’s contact with the ammonia water followed by two days’ exposure to direct sunlight.