The following piece focuses on clockmakers in the U.S. and Europe in the 18th and 19th centuries, specifically the marks and materials they used and the regulations that were placed on them. It originally appeared in the December 1940 issue of American Collector magazine (Volume IX Number 11), a publication which ran from 1933-1948 and served antique collectors and dealers.

Tall case clocks represented two crafts; that of the clockmaker who worked in metal and that of the cabinetmaker who worked in wood. In 18th-Century England and Europe, the two were sometimes combined in one man. More often, however, the clockmaker merely supervised the making of the case.  These fine clocks, each one a masterpiece, were so expensive that only the wealthy could afford them.  Yet there was a demand for them, both in the country of origin and over in America. 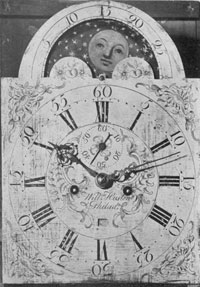 Dial Bearing Name of William Huston, Who May Have Learned His Trade in England

The century and a quarter that preceded the American Revolution saw about two hundred clock makers plying their trade in the important towns of the Colonies, but they apparently were not numerous enough to have made all the grandfather clocks of that period. Many were imported, either on direct order or as merchandise to be resold.

However, a clock complete with case was not only expensive to ship but unwieldy, especially in the small boats of the day. It was much more practical to have the movement, dial, weights, and pendulum packed in a small box and sent over at reasonable freight costs. The purchaser could have a suitable case turned out by his local cabinetmaker. Letters, diaries, account books, and private papers of both English and colonial merchants and ship owners indicate that this was the common custom. In fact, the shipment of a complete clock with tall case from England to the American Colonies previous to the Revolution was the exception to the rule.

Consequently, today we have as collectibles English tall-clock movements in American-made cases. Cabinetmakers in this country made them after the styles shown in the furniture books of Chippendale, Sheraton, and Hepplewhite. Many of these cases are masterpieces of cabinetry, just as fine in workmanship and design as any made overseas during those years.

But although it was not unusual for the 18th-Century American cabinetmaker to put labels on his furniture, he was apt to show undue modesty with the clock cases he produced. Consequently unless one knows the complete history of a tall clock and its case, it is difficult to determine the origin of the latter.

There are several notable exceptions. One is in the American Wing of the Metropolitan Museum of Art, New York. It is an early tall clock done in the best tradition. The mahogany case is in the Chippendale manner with block-front variation. On the elegantly engraved dial, in script, is William Tomlinson, London, executed with appropriate flourishes. Tomlinson made clocks from 1699 until his death in 1750. He was the Master of The Worshipful Clockmakers’ Company of London in 1733 and is generally included in that galaxy of great clockmakers working during the first half of the 18th Century.

As for the case, the block-front design gives a clue to its provenance and the printed label corroborates it. The label reads: “Made by John Townsend” and beneath, written with a pen, is “Newport, Rhode Island, 1769.” The label is damaged and the figure 6 is blurred. But if that date has been deciphered correctly, then here was a case made for an English movement in the Colonies nineteen years after the death of the clockmaker.

John Townsend Clock Case Label: This is dated Newport, 1769. The clock movement was made by William Tomlinson, of London, about 1750.

It will be recalled that John Townsend was related by marriage to the Goddards, who are credited with creating the Rhode Island block-front interpretation of the style of Chippendale.

So much for a tall clock where the identities of both clockmaker and cabinetmaker are known. There are examples where neither are clear. My wife owns two tall clocks with cherry cases made by some unknown but skilled local cabinetmaker in Kentucky shortly after the Revolution. The eight-day brass movements are obviously English. The dials are sheet iron, painted or enameled, without the name of the maker. At the top is a cutout behind which revolves a disc showing the phases of the moon. On the edge of a smaller disc are the days of the month which show through a semi-circular slot located on the disc between, but below, the winding arbors. These clocks, with practically identical movements, have what is commonly called in the trade “false plates,” that is, a cast-iron skeleton frame or bracket which is fastened to the front, plate of the brass movement. The dial is attached to this false frame.

On one of these false frames in raised letters is “Walker and Hughes, Birmingham” and on the other, “Osborne’s Manufactory, Birmingham.” I have seen dozens of similar tall clocks with unmarked painted iron dial and the name of Osborne or some other name on the false frames.

One of our clock cases is quite handsome though extremely plain and simple. The other is more elaborate. Reeded columns flanking a sunken panel decorate the base; the front edges of the waist have quarter rounds, fine reeded, without capital or pediment; while the tapered columns on the bonnet are plain round. The history of both clocks, as we have family papers to check it, is as follows:

A Kentucky Clock With English Works

In Russellville, Kentucky, between 1800 and 1810, Colonel Thomas H. Grubbs, a successful merchant and planter, “took them in trade.” He kept one and presented the other to his best friend, William Owens. In the course of time, William Owens’ son married Colonel Grubbs’ daughter. Thus the clocks passed down these two branches of the family for four or five generations, my wife inheriting the Owens’ clock from her father. Finally the Grubbs clock came into our possession from the last survivor of that branch and after one hundred and thirty years both are once more under the same roof.

As to the names on the false frames, I quote from a letter to me dated June 21, 1937, from the Pennsylvania Museum of Art: “The name Osborne is found quite frequently on the cast-iron bracket which fastens the dial to the front plate of the works, or on the back of the Moon-disc.  It indicates the name of a firm which manufactured clock dials for the trade from around 1805 onwards.

During the first half of the 19th Century clock making (in this country) declined from clock ‘making’ to turning out of an ‘assembly job.’ Instead of making a clock in his own shop, it was cheaper to buy the necessary parts from various manufacturers. The clockmaker then finished these parts and assembled the clock, placing his name on the dial.”

None of the standard reference works on English clocks list either Walker and Hughes or Osborne’s Manufactory as clockmakers. Britten shows “Osborne, Birmingham: on clocks, 1800-42.” Baillie lists a number of Osbornes, among them “Thomas Osborne, Birmingham. Astronomical and Musical Clocks, 1801.” There was a firm of Osborne and Wilson in the dial business in Birmingham as early as 1772. They separated in 1778 and evidently each man carried on independently for a number of years afterward.

Many other English firms made clock dials for export. In America, many hardware stores, dealers, and others, carried clock dials and clockmakers’ supplies and advertised them for sale. The same was evidently true of English firms which made cast-brass clock wheels, pinions, frames, and other parts for the standard eight-day brass movement. Doubtless these were semi-finished and “blanks” which American clockmakers bought “in the rough” and machined and finished. 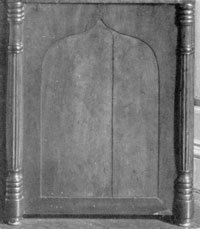 The brass and copper industry was late in getting under way in America. The mother country was averse to the emigration of those skilled in the art and forbade the export of machinery. Both were smuggled out to some extent but it was early in the 19th Century before actual brass founding was practiced here to any extent.

However, let no one jump to the conclusion that before the Revolution American clockmakers imported all of their brass metal from England or imported plates, wheels, and other parts in semi-finished form. They did not. Many of them were proud to announce that they were recently of London and they fashioned their clock movements according to the rules and methods learned there. It was, in fact, after the Revolution and up to 1825 which marked the end of making tall, eight-day brass clocks here that American clockmakers drew more and more upon England as their source of supply.

There is a tradition, which I like to label “interesting, if true,” about the origin of the clocks without the name of the maker on their painted iron dials, of which our two Kentucky clocks are typical.

It is a well-known fact, of course, that in England the various types of master craftsmen who worked in gold, silver, metals, as well as at watch and clock making, were necessarily members of their respective guilds. Their handicraft had to be submitted for examination and be passed by their guilds before it could be sold. The Worshipful Company of Clockmakers exercised absolute control, not only over its members, but upon all clock making within a radius of ten miles of London. The penalties imposed by these guilds for infractions were drastic.

It should be remembered that in the 18th Century in England every clock was made to order for a customer who wrote his bill of particulars. It took many months of time not only of the master, but also of his apprentice, to turn out just one clock. Every wheel and part spoiled by an apprentice, or not meeting the degree of perfection prescribed by the guild, was time and labor lost. Literally speaking, the parts of fine clocks were worth more than their weight in gold, because of the infinite time spent on them.

According to tradition, there were master clock makers who did not destroy defective parts, but set them aside. When enough had accumulated to make a movement, the master himself, away from the prying eyes of his apprentices, would assemble them and inscribe some fictitious name as maker and a place far removed from his residence. Such clocks were dependable, accurate timekeepers. Their only fault was that they did not measure up in every particular to the high standards exacted by the guilds.

Such clocks were gathered sub-rosa and smuggled into Holland where they were exported to a ready market in the American Colonies where Yankee peddlers sold them in turn to local silversmiths and jewelers in the various cities and towns. It is, of course, impossible either to prove or disprove this interesting tradition but the records of trials, fines, and punishments meted out to offenders of the rules of various guilds, make it plausible.

But whatever the origin of these nameless English clock movements, the importance of the Yankee peddler during the 18th and through the first quarter of the 19th Century as a distributor of clocks and other products is clear. He was in the van of the westward trek after the Revolution and tradition has it that through him English clock movements, such as our two Kentucky examples, found their way to every section of this country.