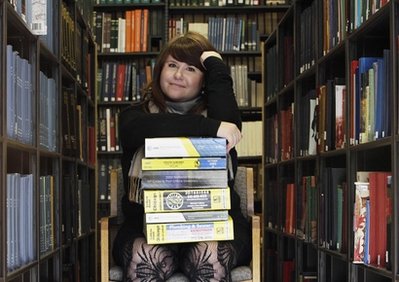 It started last month, when Ammon Shea’s “The Phone Book: The Curious History of the Book That Everyone Uses But No One Reads” was published (Shea’s previous literary challenge was to absorb every last word of Oxford English Dictionary). In “The Phone Book,” Shea debunks myths (there’s no record of a phone book being used during a filibuster) and makes connections between 19th-century phone books and 21st-century social media (“They were the first step in our long journey toward the pandemic self-surveillance of Facebook,” says Greg Beato in his review at reason.com).

Now, according to Michael Felberbaum of the Associated Press, telecommunications companies such as Verizon are dumping their white pages because, well, people can find all the same stuff on the Internet. That hasn’t kept doctoral students like Emily Goodmann (seen above in an AP photo by Charles Rex Arbogast) from doing their dissertations on these paper dinosaurs. In fact, Emily might want to check out this 1881 copy of the Boston Telephone Directory, which includes the phone number of some guy named Alexander Graham Bell.