Flashback: Out of a Recession Came Worcester China

The following piece details the establishment of the Worcester china manufacturers in 1751 by a small group of men hoping to bring economic stability to their town of Worcester, as well as the pottery’s evolution during its early years, which was influenced by changes in ownership. It originally appeared in the January 1939 issue of American Collector magazine (Volume VII Number 12), a publication which ran from 1933-1948 and served antique collectors and dealers.

Is business bad? Is unemployment increasing in your town? Don’t wring your hands and cry for the good old days! Start something new! This, in the 20th Century manner, is the story of how soft paste porcelain came to be made in Worcester, chief city of Worcestershire, and 110 miles north of London. Not that such fanfare accompanied this or any similar project of the time, for the 18th Century was not one of italics but of unhurried dignity with both written and spoken word measured and veering slightly toward the ponderous. 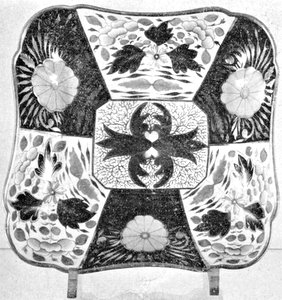 A Dish of Imari Pattern: These Japanese decorations, widely used for porcelain table services by Worcester and other 18th Century potteries, were the inspiration for the Staffordshire ware known as Gaudy Dutch. This piece is done in gros bleu, red, green, and gold. The background of the six panels is alternately while and blue.

The simple facts were that in 1751 Worcester, which had long been a center for glovemaking and the weaving of broadcloth, found itself in commercial doldrums. To remedy this, a group of 15 gentlemen quietly organized the Worcester Tonkin Manufacture as a partnership and subscribed £4,500 capital. Apparently none of them had had any previous experience in any branch of pottery.

The leader in this enterprise was Dr. John Wall, a physician with a good working knowledge of chemistry. His chief assistant was an apothecary named William Davis, believed to have been associated with him in his medical activities. According to articles of partnership, the founders were pledged “to discover for the benefit of themselves and the other subscribers the real true and full art of making porcelain.”

Like most successful venturers in a new business, Dr. Wall formed his plans carefully, for among the subscribers were Richard Holdship, an experienced engraver, who later was in charge of transferprint decoration, and Samuel Bradley, a Worcester silversmith who is held to have supervised the making of many of the molds, since the raised decorations all have a character much like those of silver of the period. There were also two experienced potters, John Lyes and Robert Podmore, for whom additional payments were scheduled “the better to engage their fidelity.” Evidently, this had little weight with Podmore, for five years later he left Worcester and assisted Richard Chaffers in establishing his pottery at Liverpool. 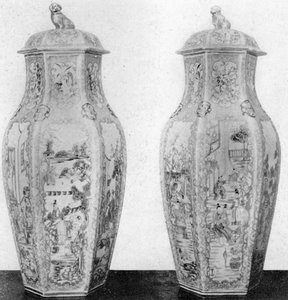 A Pair of Chinese Vases: Worcester of the Dr. Wall period, these decorative pieces of porcelain, 17 inches tall, were made circa 1780.

The speed with which this partnership of 15 men began making and firing their porcelain is amazing. Warmstry House, an old mansion near the Cathedral, was leased from the Earl of Plymouth, kilns were built and by the next year the Worcester enterprise had absorbed a short-lived porcelain works at Bristol. The latter was duly advertised as “now united with the Worcester Porcelain Company.”

The initial years of Worcester china making are always referred to as the Dr. Wall period and run from 1751 to 1783. Under Dr. Wall’s leadership, the enterprise was very successful. He was obviously an excellent business man with a fine artistic sense and thorough understanding of the problems involved in making porcelain. The decorations of this period are of the finest, and he must have attracted to his factory the best artists then working at china decorating in England.

The first advertisement of a sale of Worcester-made porcelains appeared in the Gentleman’s Magazine for August, 1752, and stated that it would commence September 20. This was obviously the annual or semiannual auction by which it was the custom to market what had been made at potteries and other industrial plants. This method held for many years, both in England and the United States. In fact, Deming Jarves employed it some 70 years later at the Sandwich glass factory. 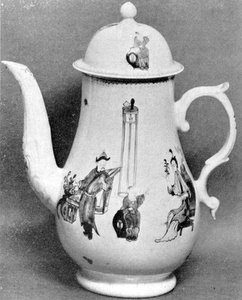 Coffee Pot with Chinese Decoration: Of the Dr. Wall period, this is typical Worcester made to compete with Oriental Lowestoft.

Because the Worcester kilns were not very large, the factory first made small tableware exclusively. From the start it avoided the mistake of both Chelsea and Bow of making a porcelain that was liable to crack if washed in hot water. Instead, the Worcester porcelain was of a harder denser body with far greater resistance to heat, and the glaze did not readily craze. Further, the pieces produced, in shape and decoration, copied those imported at the time from China.

One wonders at the temerity of Dr. Wall and his partners in deliberately going into direct competition with as powerful a mercantile enterprise as the British East India Company. That it was intentional is evidenced by an advertisement that appeared in 1763 in the Oxford Journal. This stated in part that “services of Chinese porcelain can be made up with Worcester porcelain so that the difference cannot be discovered.”

The phrase “made up” obviously meant that missing pieces from Oriental dinner services could be replaced by those from Worcester. The many examples extant are clear proof that the claim of this advertisement was not made without the ability to execute. 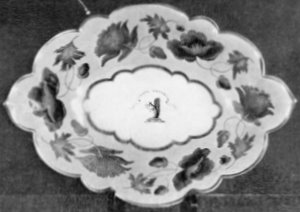 An Armorial Dessert Plate: After period of Chinese designs, dinner and dessert services decorated with crests were made in numbers at Worcester. This is marked Barr, Flight & Barr, circa 1810.

But Worcester porcelain of the Dr. Wall period was not wholly given over to copies of Chinese importations. As early as 1757, the factory began to decorate its wares with transfer prints from copperprint engravings and two men prepared most of the latter. They were Richard Holdship, already referred to, and Robert Hancock, a clever engraver who had originally worked at Battersea and apparently brought most of his plates with him. Here one of the outstanding achievements was a very dense black, done both as an underglaze and as an overglaze enamel. Two of the best-known Worcester transfer-print decorations were Hancock’s “Tea Party” and his “King of Prussia.” Others were done in red and puce.

As a development of this means of decorating, Worcester perfected a method known as bat printing. Here, instead of transferring the design from the engraved plate to the piece of porcelain by means of a sheet of paper, small squares of glue were used.  Extremely fine effects resulted and pictures by Angelica Kauffmann, Cipriani, and Bartolozzi were reproduced from the originals by these artists. 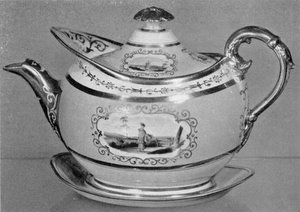 Teapot of Neo-Grecian Design: The decoration is in colors and gilt. Marked, Barr, Flight & Barr. Circa 1810.

A turning point in the artistic development of Worcester porcelain came in 1768 when a number of the decorators who had worked for Chelsea decided to migrate and joined the staff of Worcester. From this, date the porcelains decorated with the exotic birds so generally ascribed to Chelsea.

This same year saw new and large kilns built at Worcester and the factory began to make ambitious pieces of porcelain. Two years later, in accord with the Adam period, porcelains of the NeoClassic form and decoration were produced.

After Dr. Wall’s death in 1776, Davis continued to manage the factory along the lines that its organizer had developed, but he lacked business acumen and Worcester did not prosper. Then in 1783, David died and Thomas Flight, who had been for some years the company’s agent at its London warehouse in Cheapside, bought the Worcester Tonkin Manufacture for £3,000. His sons Joseph and John were put in charge of the pottery. They changed the character of wares somewhat and introduced more ornate decoration so that today Worcester pieces under Flight ownership are distinct from those of the Dr. Wall period. 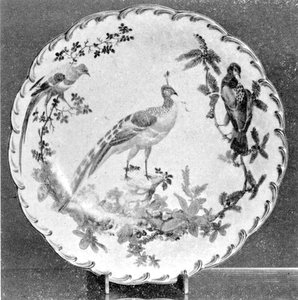 A Colorful Bird Decoration: Of the Dr. Wall period and circa 1775, the edging is of royal blue and the birds and foliage in brilliant colors against a mellow landscape.

This change of ownership also brought about the establishment of a second Worcester porcelain. Robert Chamberlain had been the first apprentice and had risen to be in charge of the decorating department. In 1784 or 1785, with his brother Humphrey, who had also worked under Dr. Wall and Davis, he established his own works which became known as “Chamberlains’ Worcester.”

At first it was solely a decorating shop at which porcelain in the white from the Shropshire pottery at Caughley was used. But the brothers prospered and by 1789 had built kilns at Diglis in Worcester and commenced making porcelain as well as decorating it. Naturally there was keen rivalry and sharp competition between the two factories but both continued.

This it remained until 1829, when the last of the Flights had died and the Barr family carried on for eleven years more. Then it was merged with that established by the Chamberlain brothers and Chamberlain & Co. became the name and mark. Finally, in 1862, the entire enterprise was made a joint stock company under the name of the Worcester Royal Porcelain Company, Ltd., and as such the company founded 188 years ago still operates.

During the long period between starting in 1751 and the merger of the original pottery with the Chamberlain offshoot, Worcester copied not only Chinese porcelain, but also those of the outstanding European potteries. 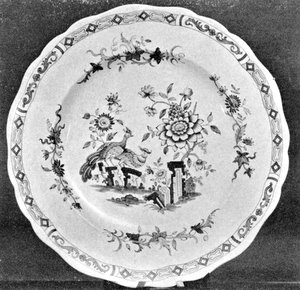 A Chamberlain Worcester Plate: Here the decoration for a large dinner service, of which this is one plate, includes both Chelsea birds and lotus flowers from the Imari patterns. Done in full colors, it was made circa 1825 and bears the impressed mark “Chamberlains’ Worcester.” - courtesy American Art Association-Anderson A Galleries

A Worcester Bowl: Of the Dr. Wall period, because the decoration includes exotic Chelsea birds, it dates after decorators from that pottery came, in 1768, to work at Worcester.