Geeking Out Over the Bloody Legacy of VHS 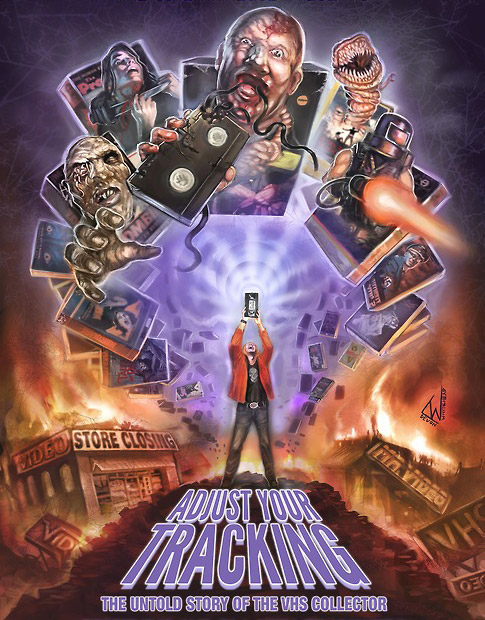 Slowly but surely, underground film aficionados are returning to the golden age of home cinema, resurrecting an archaic device most have consigned to the trash heap. Is it the 35mm projector? Nope. Cathode ray tube televisions? Not even close. In fact, all these film fans want is a good old-fashioned VCR.

“VHS is closer to the old drive-in or grindhouse theater, the way the director intended it to look.”

Once a fixture of every American living room, the VCR and its beloved VHS tapes have long lost their luster. As DVDs, Blu-ray discs, and services like Netflix overtook the market, VHS tapes piled up like so many plastic carcasses, filling thrift-store shelves and landfills alike. But hardcore video fans like Dan Kinem and Levi Peretic, directors of the new documentary “Adjust Your Tracking,” just won’t let them die.

Like most VHS enthusiasts, they know that thousands of films originally sold on videocassette haven’t been converted to other formats, and probably never will be. “There’s no exact number,” says Kinem, “but a lot of people believe that around 40 percent of everything that came out on video never made it to DVD.” With the end of stand-alone VCR production in 2008, it’s highly unlikely these tapes will ever be re-released on VHS again, and their marginal quality and limited box-office reach makes them unlikely candidates to be upgraded.

As distributors deem them unprofitable and consumers get rid of their old tapes, videocassettes are becoming coveted collectibles for connoisseurs like Kinem and Peretic, who are stepping in to preserve these relics of film history. “VHS was such a huge market, and the video boom of the 1980s was so big that it would be impossible for all of that to be released on DVD,” explains Kinem. “Nobody knows who owns the rights to those movies, the studios aren’t interested in releasing them, or the titles are so obscure that almost nobody’s even heard of them to begin with.” 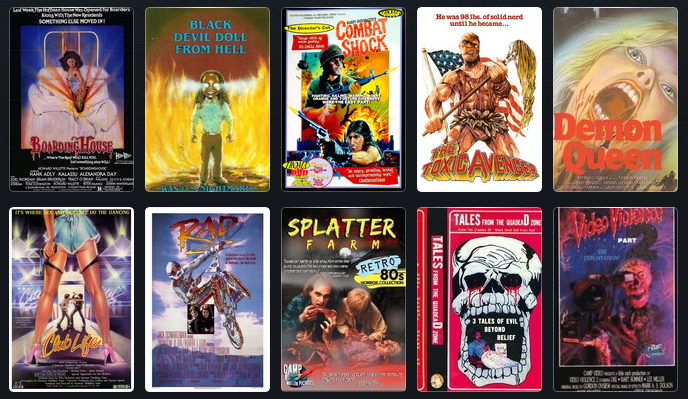 A few of the VHS covers for films featured in “Adjust Your Tracking.”

Kinem discovered the wacky world of VHS collecting about three years ago, when he first realized just how many films you couldn’t get on DVD. Joining forces with fellow film-enthusiast Levi Peretic, the two conducted more than 100 interviews across the U.S. and Canada, connecting with collectors online, through independent video stores, and by word of mouth. What these VHS obsessives have in common is their dedication to this undervalued medium, even as the market for videotapes continues to bottom out, with video stores steadily closing and the price of common old tapes at an all-time low.

Though belittled by fans of high-definition media like DVD and Blu-ray, VHS was far more groundbreaking at the time of its release than these newer formats are today. The “Video Home System” revolutionized the way people watched films, offering the first on-demand home-viewing experience. “VHS changed the entire film industry,” Kinem says. “Studio execs were so nervous this format was going to ruin the theater-going experience, and television, too, because you could now record TV and fast-forward through commercials. It was this new technology, and nobody really knew what to do with it.”

It’s no accident that today, videotape equals VHS, the victor in the great format war of the 1970s, which pitted JVC’s design against Sony’s. Although many film buffs gave Sony high marks for the quality of its Betamax tapes, JVC prevailed because its VHS tapes were not only more affordable, they also played longer (the first Betamax tapes ran only an hour, whereas VHS cassettes ran for two, making them a much better match for most 90-minute feature-length films). From its debut in 1976, VHS quickly grew into a gargantuan success: For movie producers in the ’80s, a VHS release could be as profitable as its theater distribution, and many low-budget flicks were made with this small-screen viewing experience in mind.

“Especially for movies that were direct to video or shot on video, viewing them on DVD doesn’t make a lot of sense, because they were originally intended to be viewed on VHS,” continues Kinem. “These are movies that feel too cleaned-up on DVD and Blu-ray, as if they were never meant to look that good. You can see the mistakes they made and the bad makeup and everything. Watching them on VHS is closer to the old drive-in or grindhouse theater, the way the director intended it to look.” For Kinem, Peretic, and many other VHS fans, there’s an authenticity to viewing certain movies on VHS that’s integral to the film experience, no different from the way record fans think certain albums should only be played on vinyl.

Additionally, many films now considered classics would never have found an appreciative audience without VHS. “A lot of my favorites and other people’s favorites did terribly in the theaters,” says Kinem, “and it’s strictly because of VHS that you were able to rent them and watch them. They were able to have this second life on VHS.” 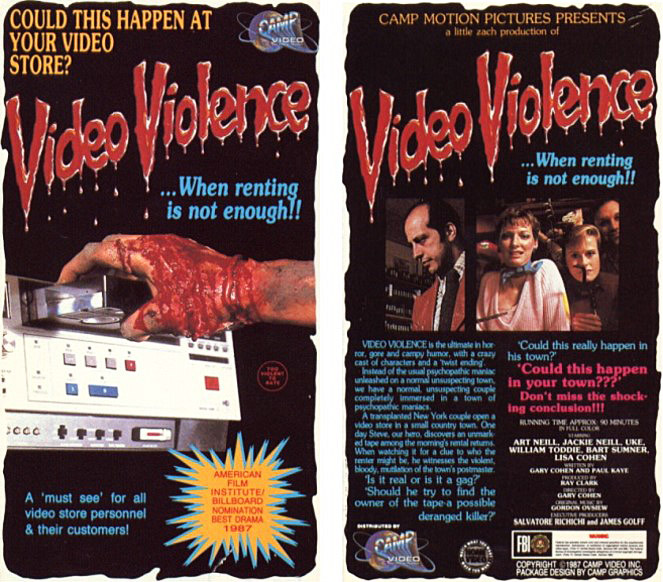 Some VHS skeptics understand all this, but still doubt the physical durability of videocassettes. Kinem says that despite rumors that magnetic tape disintegrates after only a few years, he has tapes from the 1970s that still play perfectly. This is in sharp contrast to the disc-skipping and unexplained playback errors that often plague DVDs, even those without any signs of damage.

“If you don’t find that one tape, it might be lost for good.”

“I think the way tapes were built was more sturdy; they were almost indestructible,” Kinem says. “Even if you crack the case or break some aspect of it, you can always take the tape reels out and put them into a new casing, and you’ve still got a playable movie.” The ability to watch these films is paramount for most collectors, since they offer the only access to many long-forgotten titles.

While Kinem has a soft spot for any film that never made it to DVD, he particularly loves horror flicks. Possibly the most popular genre among VHS collectors, scary movies are a perfect match for the lo-fi aesthetic of VHS, whose less-than-perfect quality often heightens the fright-factor.

“Sometimes you can’t quite make out what’s going on; people really react fondly to that,” says Kinem. “The horror genre is known for crazy, memorable box art, too, so a lot of people are attracted to the covers—the gory, painted artwork that people remember from video stores back in the day. They want to put them on their own shelves again and show them off.” 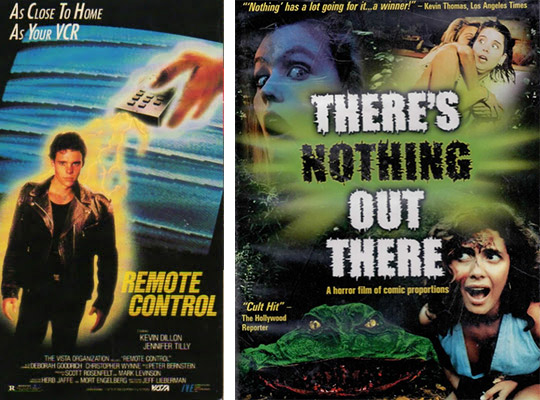 Left, the cover art for “Remote Control” from 1988. Right, 1991’s “There’s Nothing Out There,” was a precursor to “Scream,” with characters in the film pointing out horror-genre tropes even as they were happening to them.

A surprising number of self-referential horror and sci-fi films were made during the heyday of VHS, incorporating video-watching or rental as a central part of the plot. In 1987’s “Video Violence,” an unsuspecting couple opens a video store in a small town and discovers firsthand the local obsession with making horrific real-life videos (the tagline reads “…When renting is not enough!!”). “Remote Control,” from 1988, follows a video-store clerk who discovers an alien plot against humanity, which depends on brainwashing people with a schlocky, 1950s B-movie.

However, the most sought after VHS tape is for a movie called “Tales From the Quadead Zone,” which sold on eBay for $660 a few years ago. Originally shot on video and released on tape by its director, Chester Novell Turner, “Quadead Zone” is a bizarre cult classic, sought for its rarity, terrible special effects, and senseless plot.

Two stills from the disturbing, low-budget, and ultra-rare “Tales From the Quadead Zone.”

As for their own film, Kinem and Peretic are currently crisscrossing the United States, screening “Adjust Your Tracking” to every video geek and VCR punk they can find. In addition to showing the film, at many venues they host a VHS Swap, letting collectors trade and talk about tapes.

“That’s what I love about hunting for movies and going to video stores,” Kinem says. “You can find these weird tapes and then let people borrow them to write a review or, if it’s super obscure, upload them to the Internet for other people to see. I think that’s why VHS is still so important, because there are so many movies you can only get on that format. If you don’t find that one tape, it might be lost for good.”

(Catch Kinem, Peretic, and their film at a theater near you: Check out their website for info on upcoming screenings and the documentary’s eventual release on DVD, and of course, VHS.)

God Save the Eight-TrackWarning! These 1950s Movie Gimmicks Will Shock You

VHS TapesAnyone who lived through the 1980s remembers the magic of VHS, or “Video Ho…