Amazing! Spectacular! Step Right Up and Get a Piece of the Greatest Shows on Earth 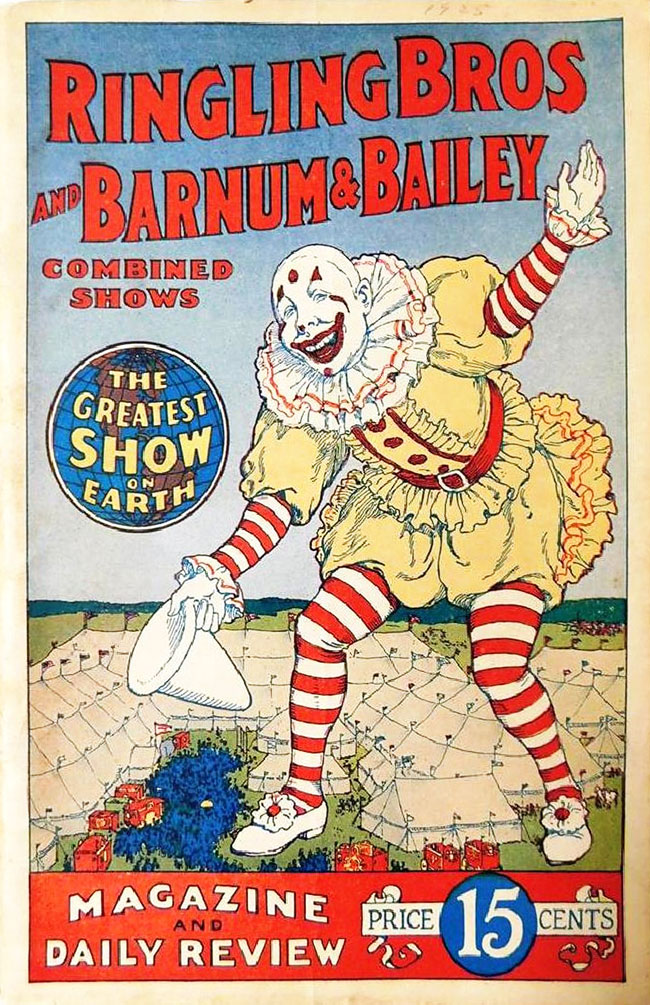 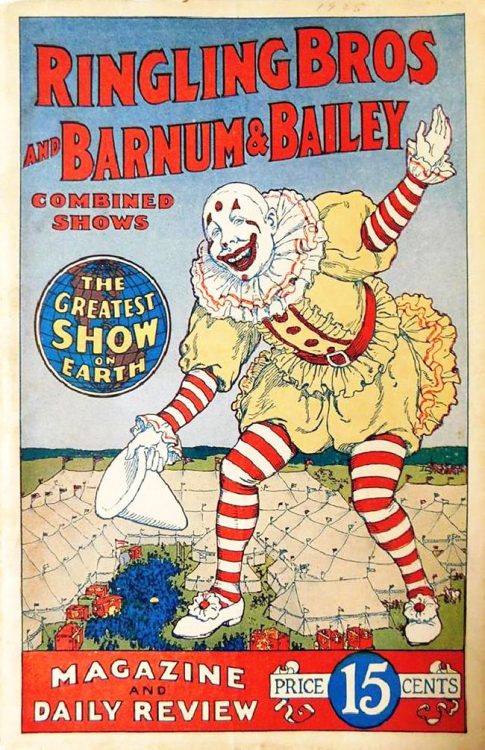 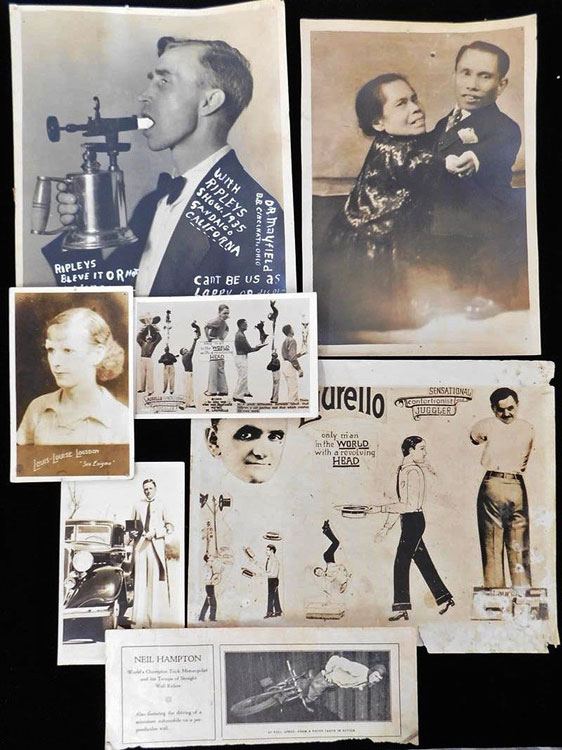 A lot of sideshow photographs and ephemera from the early 20th century. 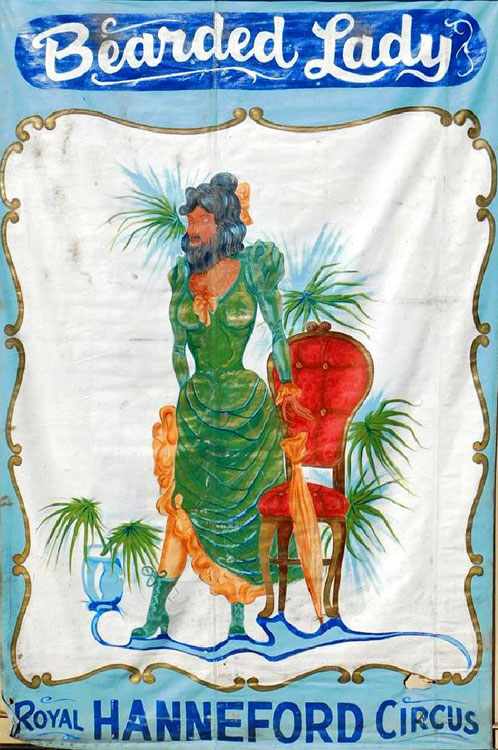 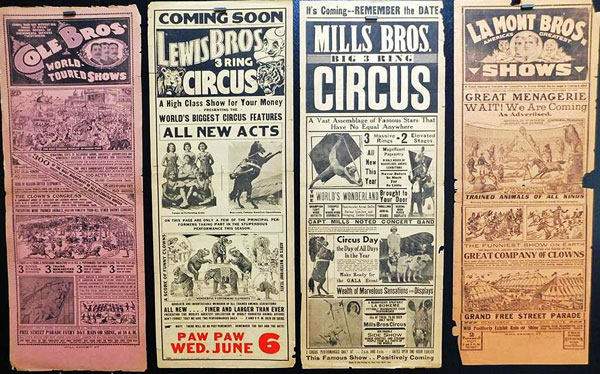 A group of circus broadsides from the turn of the 19th and 20th centuries. 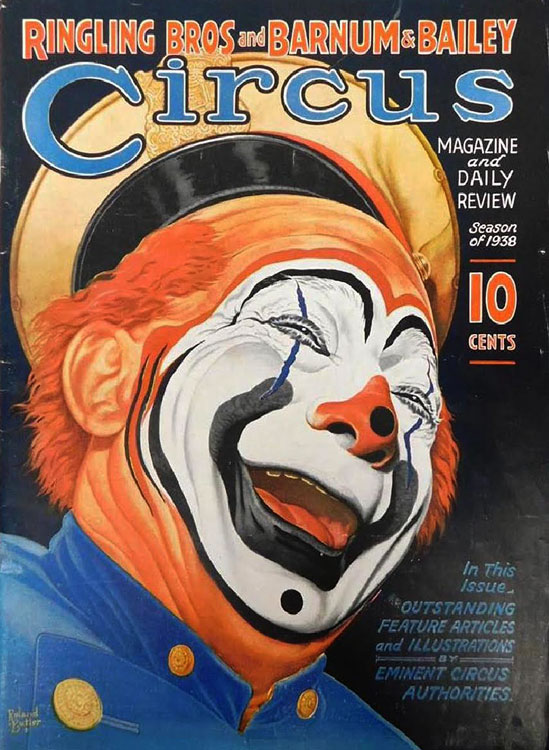 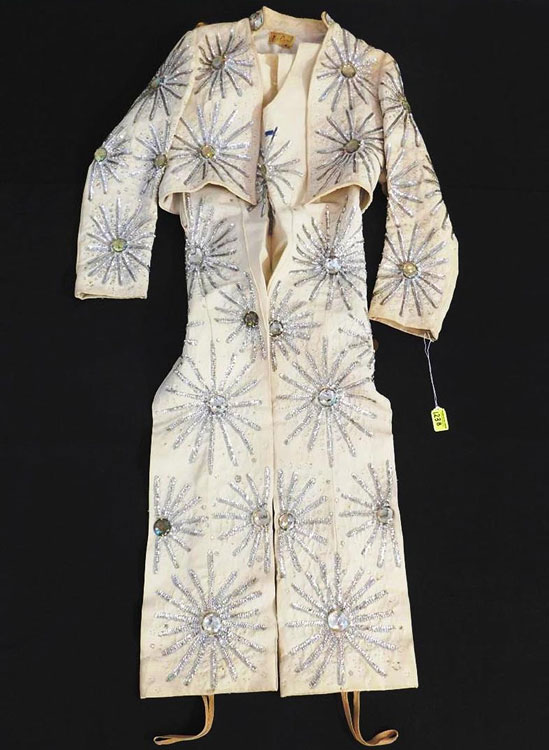 Joseph Guzman's sequined costume for his Sky-Cycle act from the early 1970s. 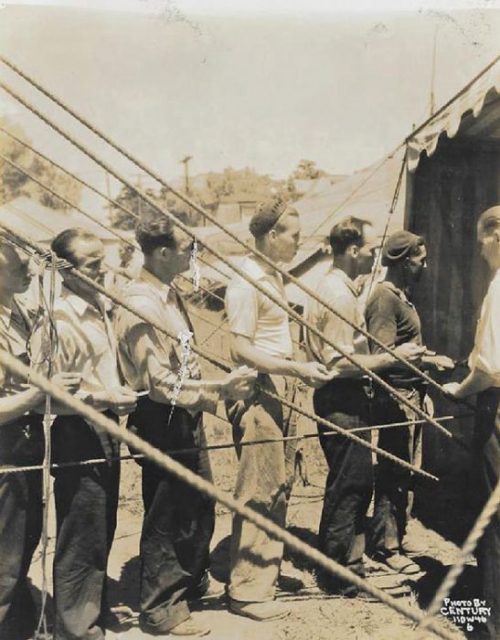 A photograph of ticket-holders waiting for entry from a 1935 photo album of Edward Kelty images. 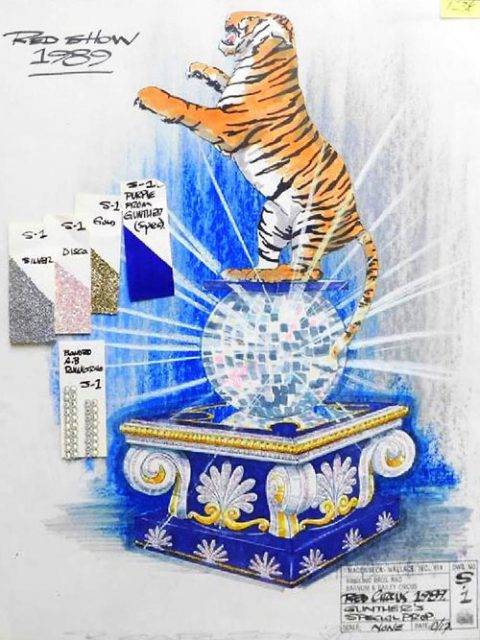 A conceptual drawing by Hagenbeck Wallace, Inc. of a Gunther Gebel-Williams' prop for Ringling Bros. and Barnum & Bailey Circus, 1989. 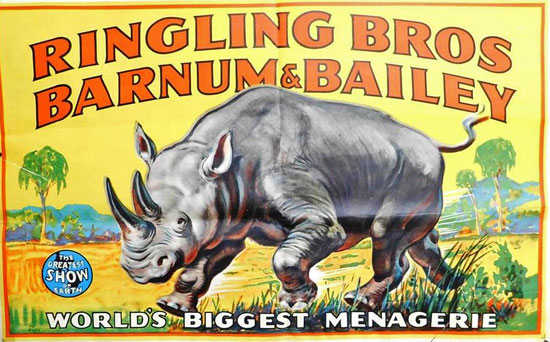 A Ringling Bros. and Barnum & Bailey poster from the mid-20th century. 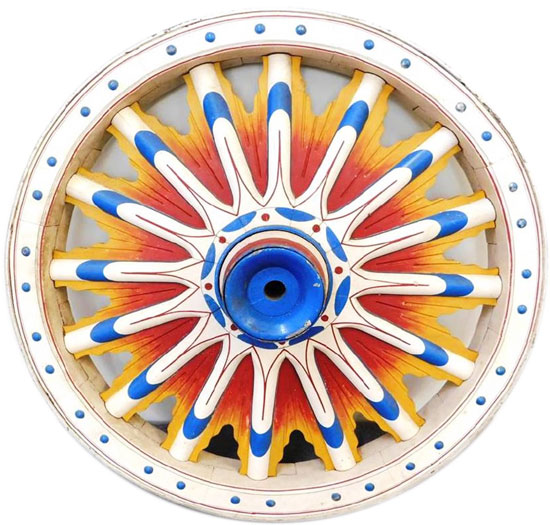 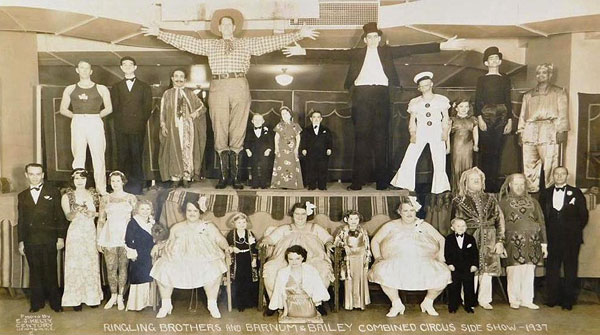 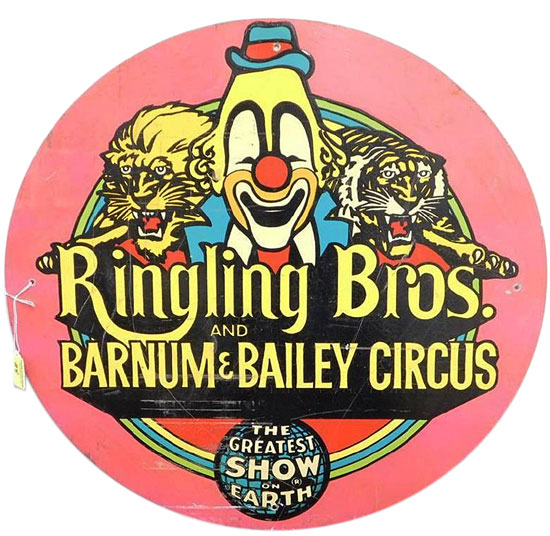 A medallion sign for Ringling Bros. and Barnum & Bailey Circus, circa late 1960s to early 1970s. 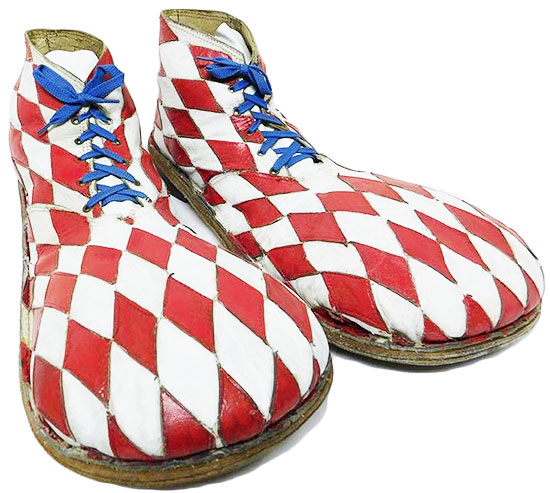 Shoes worn by Blenko the Clown, circa mid-20th century. 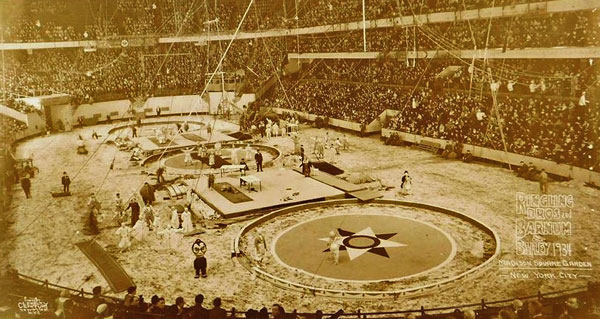 An overview of the Ringling Bros. and Barnum & Bailey Circus at Madison Square Gardens, New York City, taken by Edward Kelty in 1934. 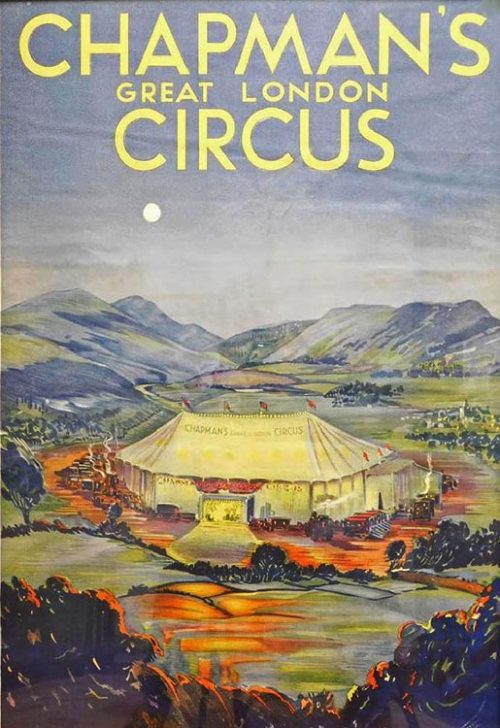 A poster for Chapman's Great London Circus, circa 1930s.

For millions of American kids, Ringling Brothers’ shows were a highlight of childhood—a magical experience of heart-stopping acrobatic feats, majestic trained animals, and silly bumbling clowns. Yet those shows came to a stop in 2017, when the Ringling Bros. and Barnum & Bailey Circus held its last show after operating continuously for 147 years. Though circuses will live on, adapting to current audiences and culture, it is clear that the classic era of animal menageries and sideshow oddities, first begun in the mid-19th century, is finally in the past.

However, on Saturday, January 20th, 2018, nostalgic fans and circus aficionados will have the chance to purchase a little piece of the traditional Big Top when Freedom Auction Company holds its second annual circus memorabilia auction. “The bulk of this material has come from performers, executives, and staff from different circus or carnival entities, whether retired or active,” says Brian Hollifield of Freedom Auction Company. “We’ve been into barns, sheds, storage yards, you name it, over the last several months gathering material for this auction.” And some of the pieces aren’t so little, like the customized Harley Davidson “Sky-Cycle” motorcycle designed to ride on a trapeze wire for Ringling’s 100th anniversary show in 1971. 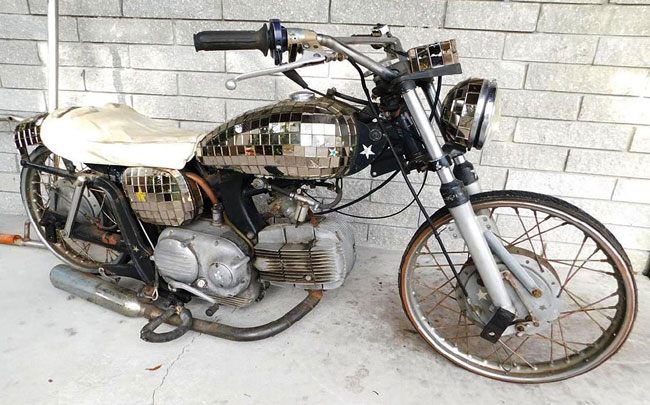 A 1971 Harley Davidson SX-350 Sprint Sky-Cycle commissioned by the Ringling Bros. and Barnum & Bailey Circus for its 100th Anniversary Tour.

With more than 700 items from around 30 different sources, it’s a remarkable collection, particularly since all of the props, costumes, and signage are original to actual circus and carnival performances. “They’ve come directly from traveling shows, seamstresses, and the closets of little old ladies’ houses,” Hollifield says. Most of the items are from the early 20th century, though the collection includes pieces dating to the late 1800s up to contemporary shows. Bidding will take place online and at the Showfolks Club in Sarasota, Florida, with a portion of the auction proceeds benefitting Showfolks of Sarasota, an organization for active and retired members of the circus world, and CATS (Circus and Traveling Shows) Retirement Project. “My wife and I cast the idea out to members of the Showfolks Club last year, and we had enough merchandise to put together a sale,” Hollifield explains. “It was such a success that people got on board without solicitation for this upcoming auction.” 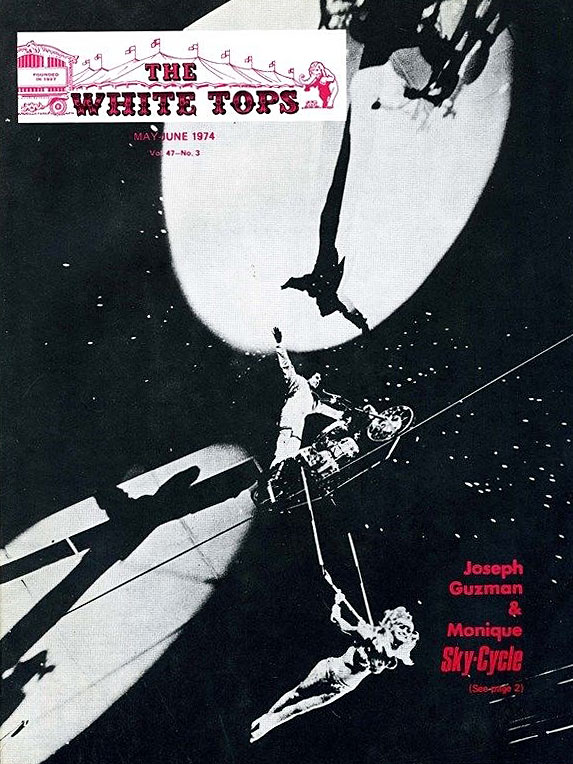 The May/June 1974 cover for White Tops, the official magazine of the Circus Fans Association of America (CFA), featured the Sky-Cycle as performed by Joseph Guzman and Monique.

Sarasota has been linked to the circus community since the 1920s, when the Ringling Brothers and Barnum & Bailey Circus moved its winter home to Sarasota from Bridgeport, Connecticut. Two decades later, Ringling’s first director—A. Everett “Chick” Austin, Jr.—proposed a circus history museum in Sarasota, which was established in 1948 as the Ringling Museum of the American Circus. “Being a warmer climate in the winter time, Sarasota was an area the circus and traveling shows often regrouped,” Hollifield says. Many of those employed in the industry also eventually settled in Florida when they retired from traveling shows.

One of the more well-known of those retirees was Robert MacDougall, whose extensive experience as a manager for Ringing Bros. informed the handcrafted circus models he became famous for. While some of MacDougall’s miniatures were included in last year’s auction, the upcoming sale features items from his personal archive, which offers a behind-the-scenes look at the circus profession and model-building process. “His archive was used in the creation of these models,” Hollifield explains, “so it contains drawings, schematics, photography, video, and other multimedia documenting some of the most mundane elements of these shows, for example, the way a rope might be tied to a stake or the way a wagon wheel attaches to a hub. MacDougall had an engineering background, so naturally his love of the circus and engineering expertise made him a perfect fit for model building.”

Perhaps the most impressive part of the sale is a significant collection of Edward Kelty’s large-format photographs, capturing the circus spectacle from all sides. “Edward Kelty was the Ansel Adams of circus photography,” Hollifield explains. “This collection is pulled from three or four different sources, and it’s the largest collection of Kelty’s photographs ever presented at auction. They’re really special pieces, and for me, as an accurate historical representation of the circus, this is it.” 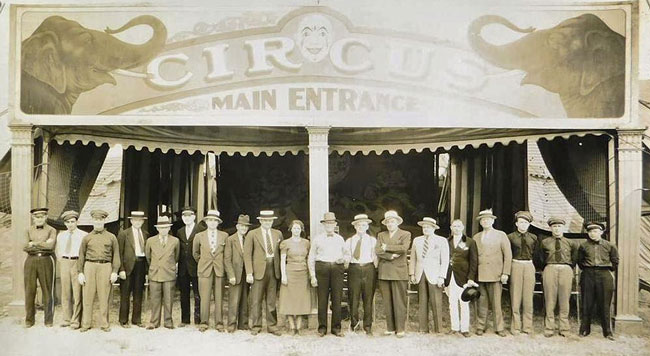 A photograph of a circus’ staff and executives taken by Edward Kelty, circa 1940s.

Where Have the Carousel Animals Gone? Antique Merry-Go-Rounds Fight Extinction 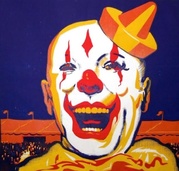 The Last Laugh: Why Clowns Will Never DieJeepers Creepers! Why Dark Rides Scare the Pants Off Us

Circus Posters and EphemeraWith the debut of the modern traveling circus in the early 1800s, circus po…