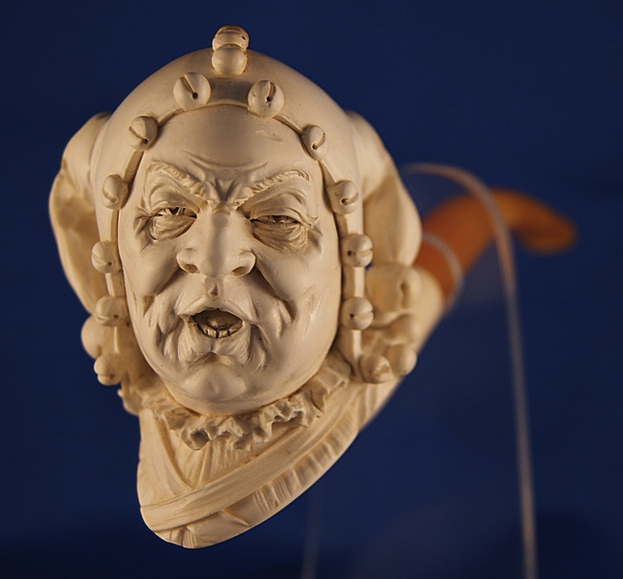 The meerschaum pipes carved in Eastern Europe at the end of the 19th century are among the most bizarre and improbable concoctions in decorative art. Some feature bowls made from the heads of historical figures like Napoleon while others sport the likenesses of literary characters such as Sir Dagonet, King Arthur’s much-abused jester (above). There are pipes based on nursery rhymes, others depicting men on horseback, and lots of naked ladies, ranging from classical nudes positioned at the ends of pipes like ship figureheads to erotica bordering on pornography.

“She was huge, just massive. Cost me an arm and a leg.”

Roy Ricketts loves meerschaum pipes, although his admiration for them is purely on aesthetic grounds. Over the past 20 or so years or so, Ricketts has collected approximately 350 late 19th, early 20th century meerschaum pipes carved in a wide range of designs; just about all of them can be seen on his website, House of Pipes, and Ricketts has posted a selection of those on Show & Tell.

“I used to collect wood carvings,” he says by Skype from his home in the United Kingdom, “but they tended to be the same sorts of figures, either Asian or religious. It was very much the same old same old, so I lost interest after a while.” But Ricketts had not lost his interest in the carver’s art. If fact, even before he started selling off his collection of wood carvings, he found himself acquiring a few meerschaum pipes. “I bought a couple of pipes from local antiques shops,” he says. “Nothing of any quality, but it was enough to get me interested.” 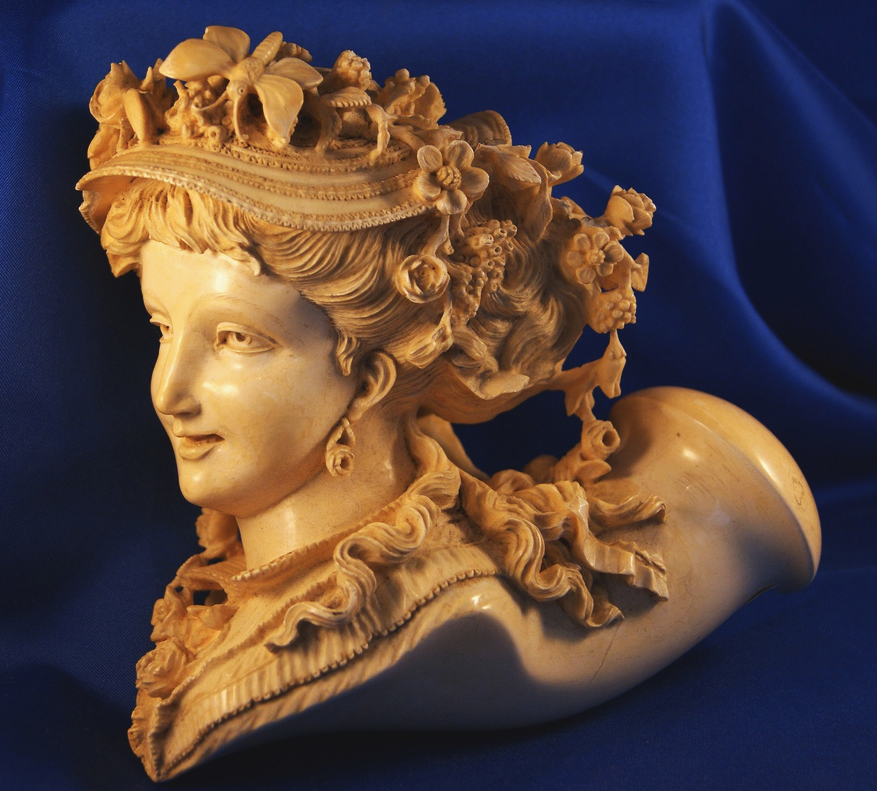 Top: A meerschaum pipe bearing a character who appears to be Sir Dagonet of Arthurian legend. Above: Ricketts named this 7-by-7 inch lap pipe Louisa.

Meerschaum is a relatively new material to pipe making, appearing no earlier than the 18th century. Found primarily in and around the city of Eskişehir in western Turkey, meerschaum is a porous mineral that’s soft enough to be carved but hard enough to be polished, revealing the carver’s artistry. Unlike hardwood briar pipes, which are also finely carved, meerschaum does not burn, which means the bowl is cool to the touch when it’s being smoked and the pipe material imparts no flavor to the tobacco. And because meerschaum is porous, meerschaum pipes change color over time as they are smoked. Thus, the stone, which is carved white, turns butterscotch brown when made into a pipe, filled with tobacco, and smoked, a process that’s frequently hurried along by rubbing a finished pipe with beeswax and, occasionally, ox blood.

“It’s the residue that gives the pipe its color,” says Ricketts. “When you are smoking, your mouth produces this spittle that drips down into the bowl, mixes with the residue of the tobacco, and forms this brown stain which some collectors like. It doesn’t overly appeal to me. I like the whiter ones, which are unsmoked.”

Ricketts’s first meerschaum was a cheroot holder adorned with a can-can dancer. Cheroots were, and are, very small cigars, whose ends are simply cut off rather than tapered, hence the popularity of cheroot holders, to keep all that loose tobacco from getting in your mouth. “Although they were all relatively short, they came in various widths.” says Ricketts, “I’ve got a couple of meerschaum cheroot sets that have several little bowls that fit in the top of the cheroot holder to accommodate the various sizes.”

Carvings of men on horseback roping animals (in this case, a colt) are not uncommon on cheroot holders.

So it was a meerschaum cheroot holder rather than a proper meerschaum pipe that first caught Ricketts’s eye. “I went into an antiques shop in a town not far from here,” he recalls. “It was a very expensive antiques shop, I never used to go in there, but I thought I’d go in and have a look. Lying in a case were about three meerschaums, and one of them was the can-can dancer. I got really carried away with it, I really thought she was something else, and I paid at the time what I considered was an awful lot of money for it, about 30 pounds, which would be about $45.” Nowadays, he says, that can-can-dancer would fetch somewhere in the neighborhood of 200 to 300 pounds. “I’ve never seen another one exactly like it.”

The main reason why Ricketts has more cheroot holders in his collection than bowl-dominated pipes is that cheroot holders gave artists more room to create and embellish. “I like cheroot holders more than the figural pipes like the Dom Perignon,” he says of the monk who invented champagne, whose head holds the pipe’s large bowl. “I like carved meerschaums in the fancy form, the really, really exotic ones. You don’t tend to get that when they are carved as a bowl.”

Ricketts is also a fan of lap pipes, especially the one he’s named Louisa. “Broke my heart when I saw that one,” he remembers. “There’s a place down on the coast called Brighton, a seaside place. It has a particular section of the town called The Lanes, which used to be very famous for its antiques shops. It must have 200 to 300 shops. At one time every one sold antiques. It had always been my ambition to go to Brighton and go to The Lanes, so one day I decided to do it. I headed out to Brighton, found The Lanes, and was very disappointed to learn that most of the antiques shops had been turned into jewelers and trendy places. But there was one antiques shop left, a big one, and as I walked in the door, I could see her in a cabinet at the back. She was huge, seven by seven inches, just massive. Cost me an arm and a leg, let me tell you.” 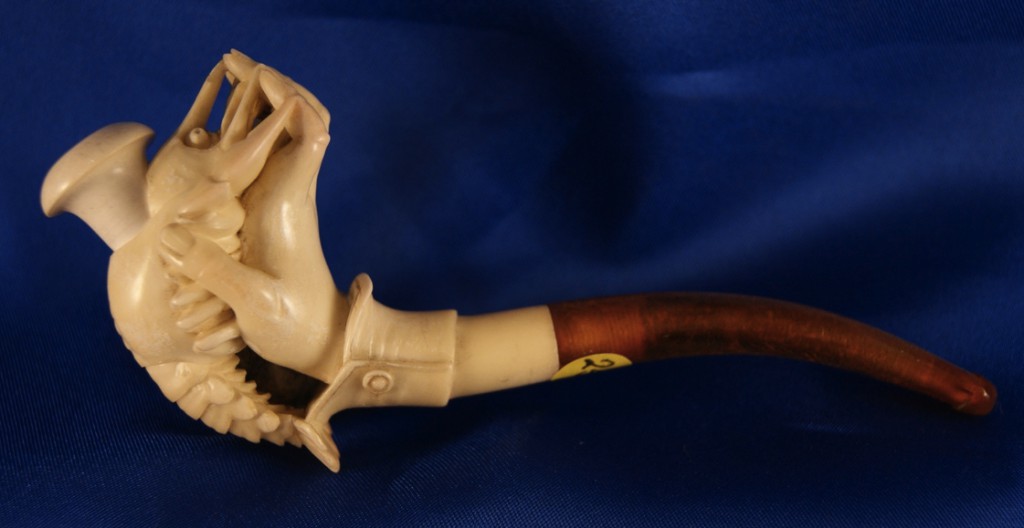 Sometimes the juxtapositions in meerschaum carvings are quite surreal, as in this hand clutching what appears to be a lobster.

As their name suggests, lap pipes were held in the lap when smoked. “You couldn’t possible pick it up,” says Ricketts. “Originally it probably had a push stem made of cherry wood, six to 12 inches long, with a flexible mouthpiece attached to that. So you could sit it in your lap and smoke it. Because the stems were detachable, they tended to get lost.”

Other gems from Ricketts’s collection include a cheroot holder depicting a stork with a frog in its beak. “I bought that one from a New York collector some years ago,” Ricketts says. “The stork’s legs are only a 64th of an inch thick. How it survived all these years, I have no idea, although it has never been smoked and has lived in a case, so that probably explains it.”

Another pipe depicts the long-outlawed “sport” of bull-baiting. “That pipe must have been custom made. It’s a very bold thing to say ‘unique’ in anything, but I imagine that pipe is a one-off, custom made for some sadistic bastard! It was a dreadful sport.” 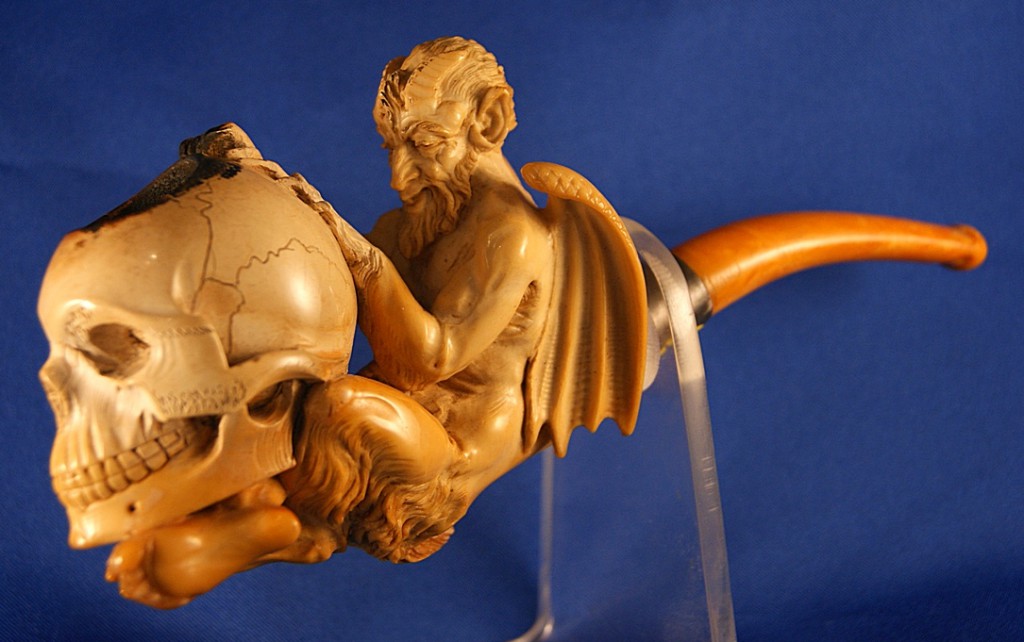 This creepy creation was said to have been owned by occultist Aleister Crowley, “an evil character,” says Ricketts.

According to Ricketts, the height of meerschaum carving only lasted for a very short period of time, “from somewhere between 1870 and 1900,” he says. “Then design changed, not exactly overnight, but very nearly that. By 1905, 1910, you can see the style of modern pipes coming in. Basically, the carving was done behind the bowl of the pipe,” as can be seen in an early-20th-century pipe Ricketts owns at the end of the slide show below. “People got bored with the fancy meerschaum pipes, you see?” he asks. Well, actually, no. “The pipes got a little ostentatious,” he adds. Now that makes sense!

More Meerschaum Pipes from the Collection of Roy Ricketts 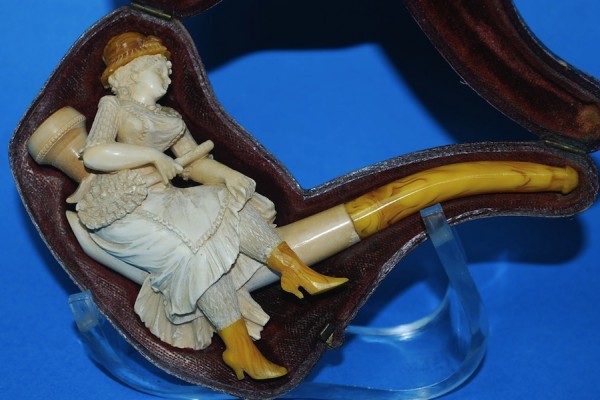 The woman in this cheroot holder is wearing amber boots and cap.

The woman in this cheroot holder is wearing amber boots and cap. 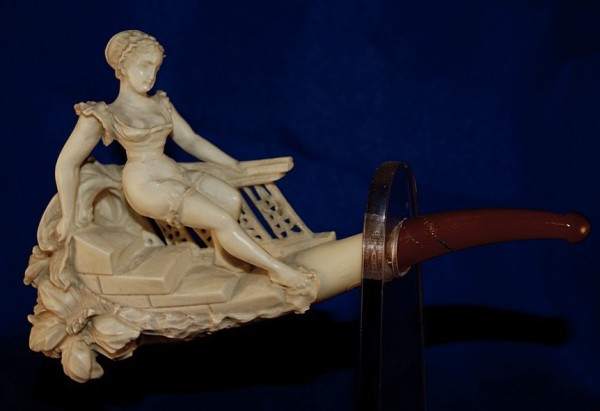 One of the first meerschaums Ricketts purchased shows a woman in Victorian bathing costume carefully making her way into the water, probably at a seaside resort. 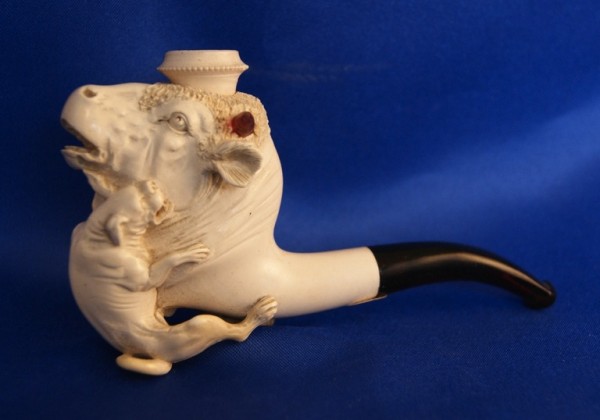 Ricketts believes this pipe was commissioned by a "sadistic bastard" who longed for the days when bull-baiting was still legal. 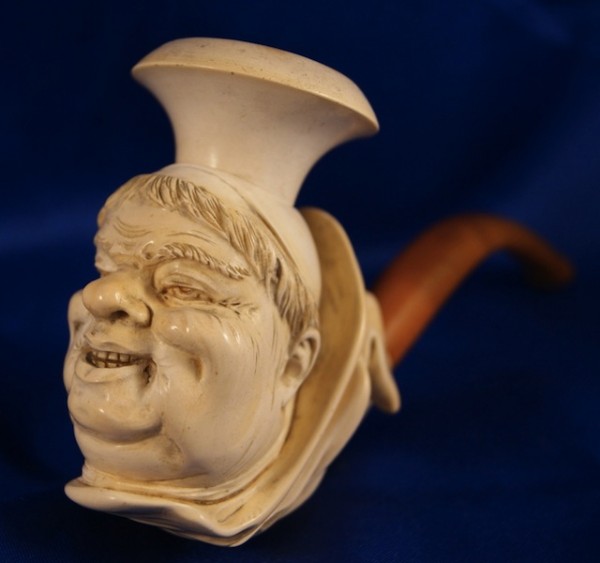 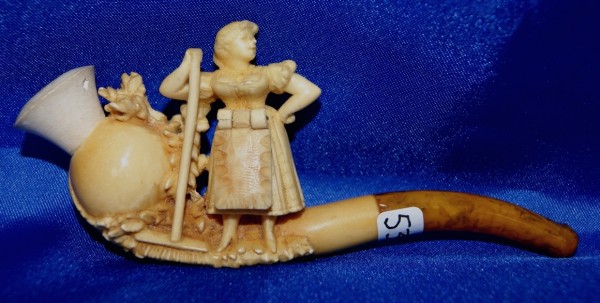 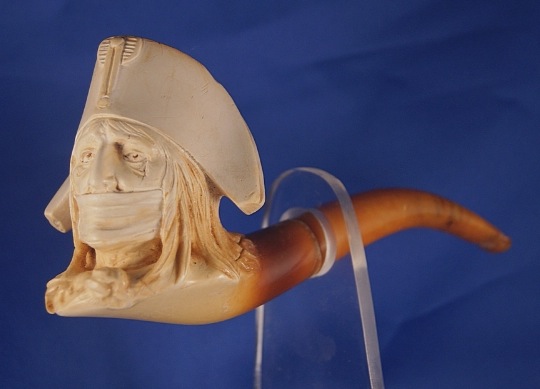 This pipe, which depicts a gagged pirate or seaman, is in the classic saxophone shape. 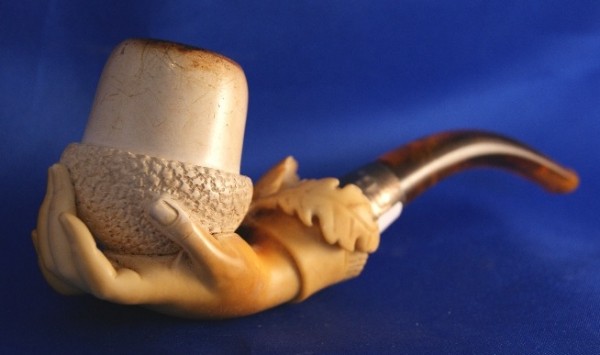 The color in the hand and wrist on this pipe is evidence that is has been smoked. 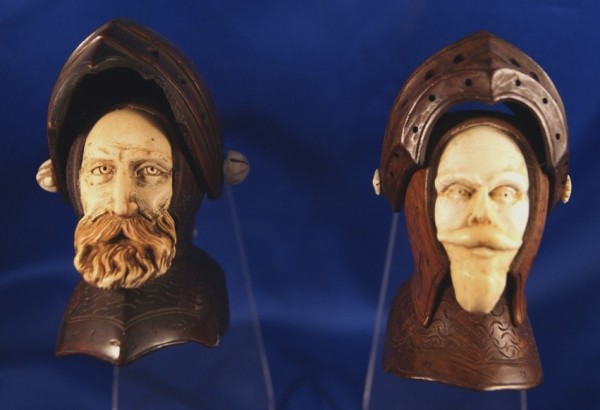 The visors worn by these knights are made out of walnut. Ivory pins act as each visor's hinge, allowing them to open and close. 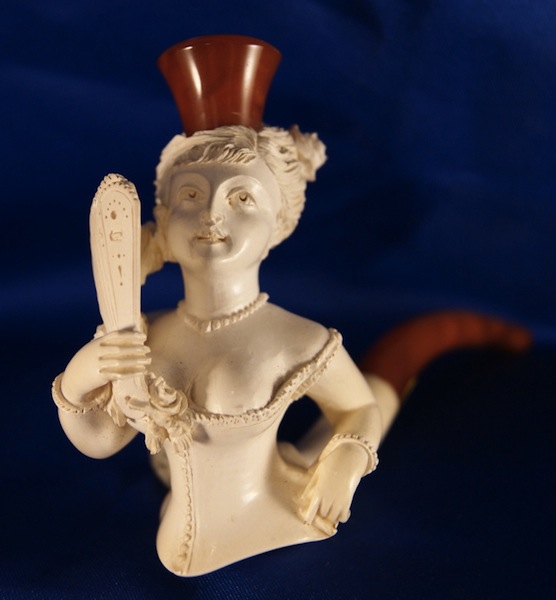 The bowl of this cheroot holder is amber, as is the stem. 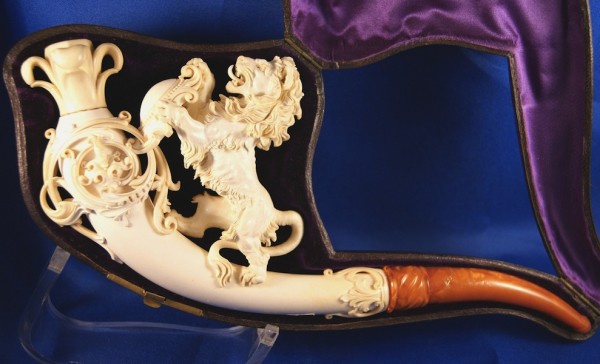 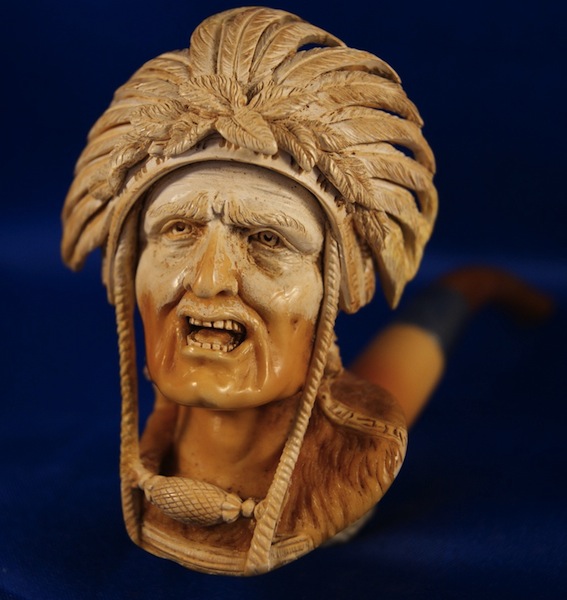 Ricketts contacted an official from the Seminole Nation in Florida to confirm that this pipe is modeled after Chief Osceola. 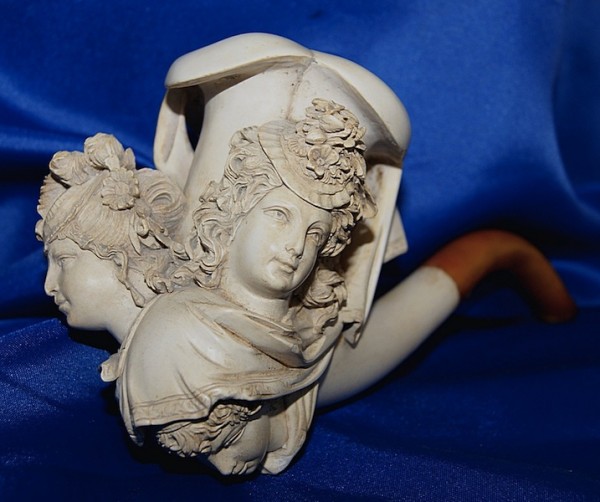 Ricketts believes this pipe may represent the three Bronte sisters. 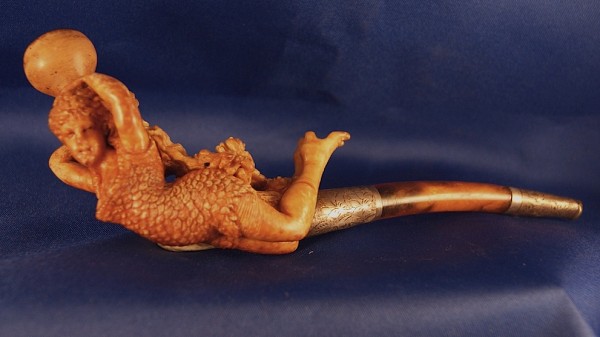 This can-can dancer was the first meerschaum Ricketts purchased. 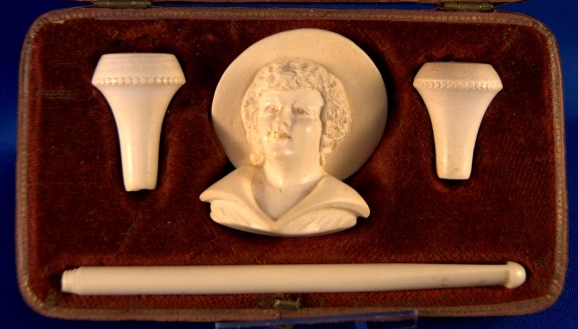 Because cheroots came in different sizes, the pipes meant to hold them sometimes came with larger and smaller bowls, into which the end of the cheroot would be inserted. 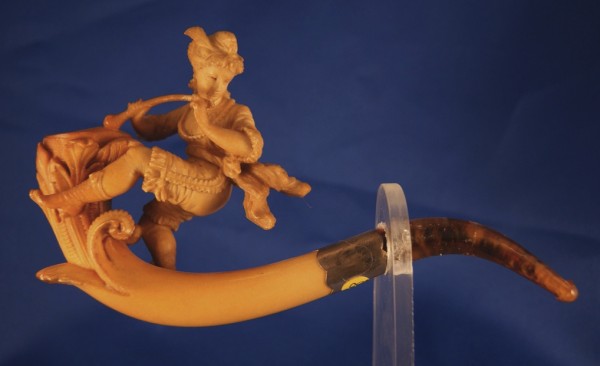 A cheroot holder depicting a young woman playing a flute. 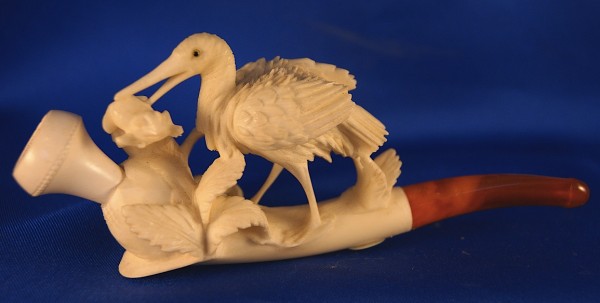 The thinnest leg on this stork is just a 64th of an inch in diameter. 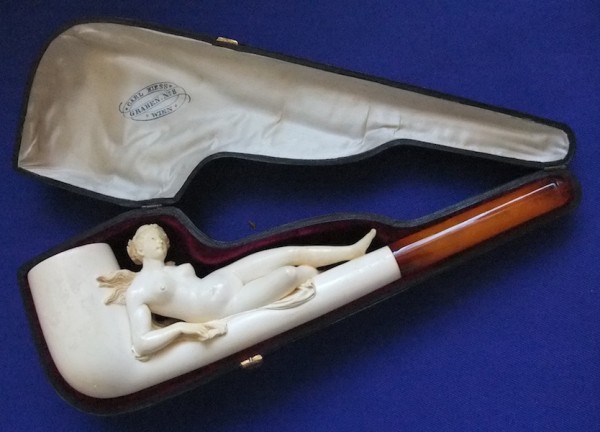 In the 20th century, meerschaum pipes became more traditional in appearance and the carving was placed behind the bowl.

The Disappearing Art of Porcelain Signs

Meerschaum PipesMeerschaum is found in a handful of places around the world, but the most f…