An Introduction to Identifying and Collecting Antique Quilts

Kimberly Wulfert is a quilt historian and collector whose website, www.antiquequiltdating.com, is a member of our Hall of Fame.

Many antique quilt collectors think of themselves as caretakers of historical documents, made at the hands of the needlework sisterhood before them. Their quilts speak to them and tell their story through clues in the style, fabric, pattern, quilt stitches and sometimes stitched or inked words, names, cities or dates.

The first time I went to an all antique quilt auction was in Southern California. One of those large Mid-western quilt dealer auction houses was holding an auction at a nearby hotel and I was very excited to go. I got there early and looked through their quilts as one is supposed to do, but I was rather new to quilt dating. It was crowded with people and I wasn’t able to get though very many stacks before the auction began. 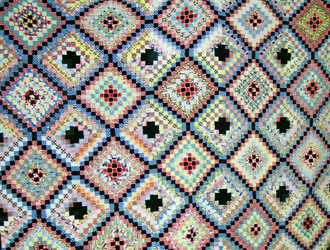 With paddle in hand, I was ready. I believed every word the auctioneer said, big mistake. When they described a small sized log cabin quilt as a child’s or doll quilt I knew they were rare, so I bid and I bid till I won. It was the most I had ever paid for something so small. Excitedly I bid on another, a large early 20th century quilt (so they said), that from a distance was visually dynamic, colorful and in great shape. I bid on some others, and thankfully lost. I say thankfully because when I took my finds to my quilt study group, they told me what I had actually bought.

The early log cabin was a cut down large log-cabin. They told me that the blocks are large, too large for a child’s version, and the binding was another clue. The early 20th century quilt was actually 1940s, That’s mid in my book. It showed wear on many of the tiny pieces in the postage stamp variation. It still is a beauty from a distance, but I would not have paid as much as I did for a 1940s worn quilt. I left deflated and determined I wouldn’t get taken again. Buyer beware was clearly the truth.

It All Starts with the Style 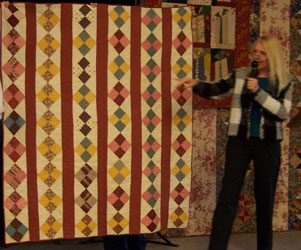 Dating quilts with accuracy includes examination of many parts of the quilts, but the process starts with one aspect and goes from there. For me, the style is usually the first place I start.

The style of a quilt and its pattern are not the same thing. A quilt’s style is a broader classification, i.e. a whole- cloth quilt, charm quilt, utility quilt, signature quilt, medallion quilt, redwork quilt, crazy quilt, appliqué small block quilt, applique 4-block, strippey(photo to the right), Colonial Revival style and so on.

Patterns describe an individual block in a quilt, like Sunbonnet Sue, fan, log cabin, Rose of Sharon, 9-patch, Whig’s Defeat, Pot and Flowers, hole in the barn door, bowtie, and so on. As always, there are some exceptions to this; when the block pattern name is also the name of the style. 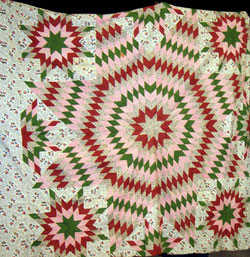 For example, the Star of Bethlehem, an early 19th century quilt pattern is also called Lone Star, a term which came later in the century and is believed to have started in Texas, the Lone Star state. The name difference is regional, but both depict the same pattern and style and the names are used interchangeably today. There is no other quilt style exactly like it. The way it is made changes, but the finished look of one large star made from rows of diamond shaped pieces covering the quilt top is the same through time. It is the manner of style in which the border and the corners are treated, and the fabrics being prints or solid colors that help determine if it’s age is early or later, regardless of what they call it.

Getting a Deeper Understanding

The style of a quilt is the first thing I see when I view a quilt, whether online, in an antique shop or booth, on exhibit or in an auction. A quilt’s fabric is hard to date from a distance, but the style jumps right out and gets the dating process under way quickly. My training to become a psychologist taught me the value of deductive reasoning using the decision (diagnostic) tree. As I go through the various aspects of the quilt, I weigh each characteristic against the era the style suggests from the start and in this way quickly determine the most likely circa date in which the quilt was made. 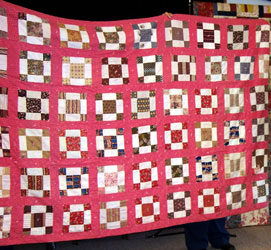 I do this on the spot during a quilt lecture using the audience’s quilts which I don’t see fully open until they are opened on stage. On the internet, I refer to scans of full shots of the front and back and close-ups of the binding, fabrics, and quilting. Of course there is always a disclaimer with any antique viewed on-line, but things can be overlooked in an antique shop as well. Good questions are asked of the owner to possibly help settle questions the quilt’s clues ask. This is especially important when evaluating a quilt’s age since they are almost never signed or dated. And even when dates are on it, a quilt’s age and value is determined by its newest feature, not its oldest.

This means that a quilt with signatures and dates in the blocks, may actually have been joined together and quilted a generation later. It is easy to assume otherwise, but take care not to jump to conclusions. About the only instance where the date can be taken as the latest feature and credible source of the quilt’s age is when the date is quilted in the quilt stitching itself on the front, as part of the overall quilt stitched pattern. Provenance is not always reliable, even when given in good faith, or when written on an old scrap of paper attached to the quilt with a pin.

In the 20th century, it was more common to name a quilt’s style using its pattern’s name. For example, four of the most common quilt styles made between 1900 and 1950 were Sunbonnet Sue, Grandmother’s Flower Garden, Dresden Plate and Double Wedding Ring. Grandmother’s Flower Garden is made with the same pattern as the late 1700s and early 1800s quilt style called Mosaic or Honeycomb. A similar style is referred to as a One-Patch Hexagon and if each fabric piece is made from a different fabric, it would be a Charm Quilt.

So names can change for a given style. Grandmother’s Flower Garden is the 20th century name; hexagons are arranged with certain colors forming particular designs, and for the 18 & 19th century mosaic style, the colors and designs the hexagons form are usually different, more varied, but not always! With this in mind, when you see or read about a hexagon quilt, if it is described as a Grandmother’s Flower Garden or as a mosaic or honeycomb, you will know what era the quilt is from. This helps when viewing an auction description, a dealer’s sales tag, or reading quilt history! 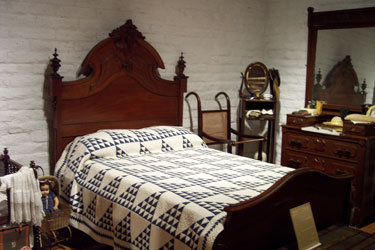 A quilt’s desirability, and therefore availability and value, fluctuates with time, decorating trends, political or historical events and discoveries, regional location, the economy and fads or colors of interest at a particular time.

Collectors tend to focus on a particular characteristic of whatever they collect, but talk to any quilt collector and they will tell you that if a quilt catches their eye and grabs their heart they will probably adopt it too.

I’ve developed a quick guide for dating antique quilts on the run while you are shopping or viewing an exhibit, at auctions, or at home with your own collection. These fold-out condensed charts will quickly point you to a good estimate of the era in which your quilt was made and describe the style so you can find it on the chart. Then you have a name for it and an era! This helps you to tell others about it and look it up in books. You can see more quilts by style here www.antiquequiltdatingguides.com and examples of my Antique Quilt Dating Guides…by Style, 1775-1900 and 1900-1950.

Kimberley Wulfert can be reached at: quiltdating@jetlink.net

Images in this article appear in the following order:

QuiltsQuiltmaking and patchwork have been popular pastimes in the U.S. since the …