Graham Hodges’ site, silversugartongs.com is a member of The Collectors Weekly Hall of Fame

The period of English history from 1770 to 1820 was a time of great change and great prosperity for England. As a result it was a growth period for silver table-ware, much of which still survives today. This period saw the change from tea tongs, through cast sugar tongs to the standard style sugar tongs, (or sugar bows). It is also the period when bright cut engraving was at its peak. 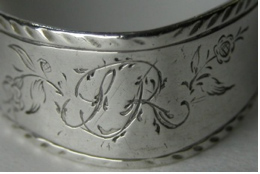 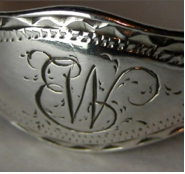 Cast tongs are relatively rare and rarer still are cast tongs that are un-damaged, for despite appearance, they are very delicate. These were made in 3 pieces, the two arms and the bow. The bow was soldered to the two arms and usually the hallmark and maker’s marks were stamped at the joins.

A pair of cast tongs by Elizabeth Taylor c. 1775 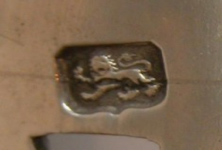 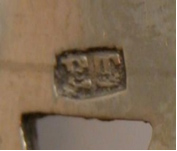 Cast tongs only lasted a very short time, from about 1765 to 1780. After this came the standard sugar tongs. To start with they were plain or with a simple thread or beaded edge, but very soon the fashion for bright cut engraving took over and dominated sugar tongs through to the early 1800’s.

An early pair of beaded sugar tongs by George Burrows I c. 1780

Whilst the vast majority of these sugar tongs were assayed in London, they were also made in the provinces, most notably Newcastle. From Newcastle we see sugar tongs made by all the well known makers of the time including the Robertsons, the Langlands and Thomas Watson.

We also see examples of tongs assayed in Exeter, York, Sheffield, Birmingham, Edinburgh and Dublin. In fact, the Irish tongs are some of the very best examples of sugar tongs of this period.

The real focus must however be London, where a huge number of sugar tongs were produced by many different makers. This period saw the creation of some of the big silver-ware companies, for example the Chawner company.

There are many sugar tongs hall-marked by silver-smiths who were part of the great Chawner company, including William & Thomas Chawner, Richard Crossley and the Williams, Eley & Fearn, to name but a few.

The style of Bateman sugar tongs is very distinctive, and I would maintain, different from all others, starting with Hester and right through to William Bateman I.

The Batemans were not alone, though. There were many other makers. From my collection I have identified over 130 different London maker’s marks for silver sugar tongs during this period, and this will be by no means all of them. The size, shape and style of these tongs varies considerably, not just between different makers, but also between tongs made by the same maker.

The style and shape of the Charles Hougham tongs shown above is much more ‘the norm’. There are many, many examples of tongs very similar to these.

Of course the most fascinating aspect of this subject is the variety – it is extremely unlikely that you will ever see two identical pairs of bright cut tongs. Interestingly it is the Batemans who made more ‘identical’ tongs than any other maker, although, as they were all hand made, even these are not quite identical.

Gradually, the fashion for bright cut engraving died away and by 1805-1810, we start to see more and more plain or ‘Old English’ style tongs, until by about 1820, bright cut engraving had virtually died away. This timing coincided with the introduction of the standard patterns, (King’s pattern and Fiddle pattern), and the increase in the use of mechanization.

In a study of these sugar tongs, we should also look at the bowls. Again these come in many styles, shapes and sizes.

A range of bowl styles

The final part to look at is the monogram. On many pairs of tongs, the monogram has been removed, often badly. This will have been done in order to sell the item or, having been sold, to put a new monogram to it. Often the monogram will be dated later than the original tongs.

It also seems that sugar tongs have been a very popular betrothal or wedding gift and are initialed as such. Many people prefer to see a piece without the monogram. Personally I like to see monograms because they add the personal touch to a beautiful piece of 200 year old British history. 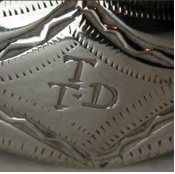 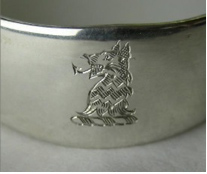 Graham is happy to answer questions about silver sugar tongs via his website, www.silversugartongs.com. You may also want to check out his new book, Georgian Silver Sugar Tongs, available through his website.

Sterling Tea and Coffee SetsTea arrived in Europe from China in the early 1600s. Despite its associatio…

Silver TongsOf all the serving implements at a dinner table, tongs are perhaps the most…