The Social Agenda of Art Nouveau

Elisabeth Horth is a coordinator with the Réseau Art Nouveau Network in Belgium. Founded in 1999, the Network was established to help preserve Art Nouveau buildings in Brussels, Barcelona, Nancy, and other European cities. Today, the Network holds conferences, promotes traveling exhibitions, maintains an online database, and hosts scientific articles for use by scholars and the general public alike. For more information, visit their site at www.artnouveau-net.eu.

Art Nouveau was a huge movement. It wasn’t only about architecture; it touched every artistic discipline. It dealt with architecture, of course, but also with furniture, pottery, painting, and embroidery. In an Art Nouveau home, the artists took care of everything—the jewelry, the dress of the patron, the furniture, the garden, the lights and lamps, the stained-glass windows, the staircase, even the wallpaper. 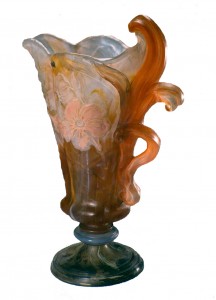 Before Art Nouveau, the decorative arts were divided into separate categories, but Art Nouveau was about the entire life, concerned with the connection between nature and your body in nature. It was a concept, as well as a way of life.

Art Nouveau artists did not work in isolation. They belonged to large groups that wanted to change lives, to bring art to all the different social classes, not just rich people but the labor classes, too. The idea was that Art Nouveau was designed for everybody, the poor and the rich. Some artists made furniture just for the labor classes; others designed very small houses to be filled with lots of inexpensive but beautiful factory-made objects. There was a very important glass production facility in Nancy that made some of its pieces in two versions—one copy for the rich, and one copy with less detail for everybody else. The idea was to make unique pieces for special clients as well as industrially produced items for the public at large.

Art Nouveau was not merely a fashion. It was a deep style and a serious movement. It wasn’t just a way to decorate houses but a way to find new solutions to create a better life. It wasn’t a trendy style. It was something with real content. 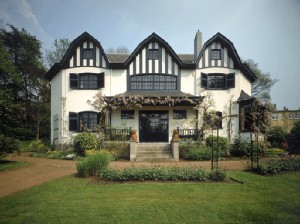 The home of Belgian artist and architect Henri van de Velde, which he designed himself in 1895

Art Nouveau artists respected nature and were focused on the quality of life in general. They were very concerned with beauty, but also with the function of each object. They wanted to take care not only of a patron’s house, but also of the workers in the factories that made the things that went into the house, so that the workers would have a better working environment. They changed the ways in which society viewed the labor classes by making special little houses for them, and even schools for their children. It wasn’t just a question of doing a nice painting for a nice room. It was the whole concept.

Beyond the factories with progressive working conditions, Art Nouveau artists and patrons innovated in other areas of society. For example, they built a lot of hospitals. There, the architecture was very important, because the goal was to put the patient in connection with nature to have a better space to relax, rest, and heal. They also built a lot of vacation houses in harmony with their natural surroundings, so one could rest and de-stress from the speed of the city. So they paid attention to the value of life and its connection with nature.

It’s difficult to mark the date when Art Nouveau began. Many people say that Art Nouveau started in Brussels in about 1890, but it’s not a scientific fact. Barcelona has some Art Nouveau buildings that were built before that, and in England there was Arts and Crafts, which started in around 1880. But in general, people agree that Brussels was a very important place for the beginning of Art Nouveau. 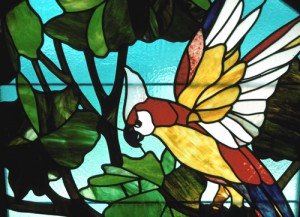 In the United States, Tiffany was very important, especially with all his work made in glass—the lamps, vases, and other beautiful objects. I am sure that Tiffany took a lot of influence from Europe, but Europe was also influenced by the Tiffany style. The stained-glass windows all over Europe used the Tiffany technique, a very special melding of color and texture. So the influence went in both directions.

Art Nouveau was not in fashion after World War I because people had other needs and priorities. Society needed to change the way it looked at the world after the war. In countries that were not connected with the war, like Spain and Finland, Art Nouveau continued, though it was less of a force. Today, people collect Art Nouveau. People restore Art Nouveau. It still has influence.

Some of the movement’s most influential designers include Lluís Domènech i Montaner, Eusebi Güell, and Josep Puig i Cadafalch. Gaudí is really important in Catalonia. In Scotland, it’s Charles Rennie McIntosh. In Belgium, it’s Victor Horta and Henry van de Velde. In Nancy, it’s glassmaker Emile Gallé and furniture designer Luis Majorelle. So it’s not just architects but other kinds of artists, too. In Ljubljana, it’s Joze Plecnik, who did everything—pieces of furniture, urban planning, restoration of castles, new building, bridges. He was very complete as an artist. 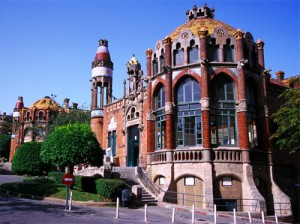 At the same time, you had graphic artists making books, posters, fabrics, and wallpaper. You even had dancers performing Art Nouveau dance. An American dancer named Loïe Fuller, who was living in Paris, created a kind of revolution in dance with her improvisational style, dramatic lighting, and voluminous costumes.

Nature was very important in Art Nouveau, but the materials were important, too. Art Nouveau artists did not limit themselves. Instead, they were open to all kinds of materials—stone, wood, ceramics, metal, and glass, even exotic woods from Asia and Africa. The influence of Japan was very important, as was the notion of the new nation. For these reasons Art Nouveau used the folkloric and Gothic vocabularies from history to maximize that idea.

Men were not the sole practitioners of Art Nouveau. There were a lot of female artists, too. In Glasgow, McIntosh’s wife designed a lot of pottery, embroidery, and wall decorations. And, of course, women models were very important because they were curvy and beautiful, and it was not a problem to show nudity. In fact, Alphonse Mucha only painted women, including those in the labor classes. He liked to show the poor children and women walking in the countryside, which is a very important social aspect of Art Nouveau.

As for its style, Art Nouveau could be floral and flowing, but it could also be geometric, like McIntosh and a lot of architects in Germany and Austria. It’s a mix of both. 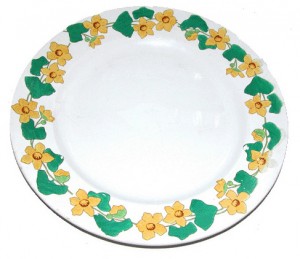 A dish designed by Kitty Kielland for Egersund Fayancefabrik, 1902

Art Nouveau’s historical underpinnings, political agenda, and economic aspects were felt across Europe, but the details varied from region to region. The artists expressed themselves in different ways, but they shared common elements. For example, the colors were different in each country. In Vienna, black and white were very important. In Brussels, orange and green were more present. In Spain, they liked flashy and bright colors. In Ljubljana, they had traditions linked to Italian and Austrian colors. So there were a lot of very specific differences, but with common roots.

Similarly, the predominant art forms changed from one city to another. For example, Art Nouveau glass was common throughout Europe, but the industry was most prominent in Nancy. In architecture, the importance of natural light in buildings was a central idea of Art Nouveau, but it was more important in the north. In the south, they had to find different solutions to remove heat from buildings. It all depended on the local realities.

Nor was Art Nouveau limited to Europe’s capital cities. For example, in France, Art Nouveau was more important in Nancy than Paris. In the U.K., Glasgow was really the Art Nouveau capital, not London. In both cases, Art Nouveau thrived because of the industrial nature of those cities.

In Nancy, they wanted to show that they were not slaves to the style of Paris. They didn’t follow the capital. They were very independent and valued their specific history. It was the same in Scotland and Finland. Very often Art Nouveau was linked to the political idea to be independent. 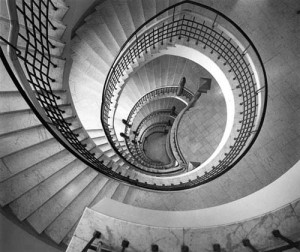 In Finland, Art Nouveau was a symbol of the nation’s desire for independence from Russia. Finland needed a new style for its sense of itself as a new nation, so there you have a connection between political change and Art Nouveau. That was also the case in Ljubljana and Slovenia, which was a young nation that got a little bit of freedom from the Austrian empire.

It’s the same for Barcelona, too, because the region of Catalonia really wanted to be independent from the rest of Spain. Art Nouveau was there, too. Art Nouveau was also the period when socialism took hold, so it was linked to ideas of progress in politics and industry.

Finally, Art Nouveau was very important in Vienna. You had Gustav Klimt, who produced a lot of murals, mosaics, and paintings to decorate the interior spaces of numerous new buildings. Then you had Koloman Moser, who was able to design buildings, furniture, and jewelry, as well as dishes, tablecloths, and dresses. The artists of Art Nouveau could do everything.

(All images in this article courtesy of the Réseau Art Nouveau Network.)