Harvey Pekar carried himself with a slouch. He had a disheveled comb-over and dark, haunted eyes. A file clerk at the Veterans Administration hospital in Cleveland, he spoke with a cantankerous rasp. If you sat next to him on the bus, you might not even notice him. 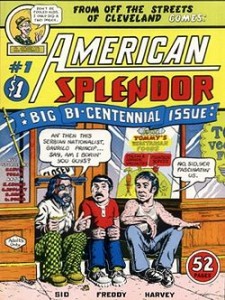 Yet this ordinary man, who died this week at age 70, made his unremarkable day-to-day life in a typical city immortal, thanks to his comic, “American Splendor.” Through these autobiographical comic books, Pekar found a devoted following, moved by the way he captured the particular loneliness of American life.

Today, we live in an age of TMI—too much information. On Facebook and Twitter, we get a running script of our friends’ inner monologues, minute-by-minute, revealing the mundane details of living (“Jason is having eggs and coffee for breakfast”), mood swings (“The human race deserves to be obliterated today”), and even embarrassing bodily functions (“Those undercooked shrimp I had for lunch are wreaking havoc on my digestion”). But in 1976, when the first issue of “American Splendor” debuted, this sort of intimate over-sharing was rare—and unheard of in comics.

On that day, Pekar changed the comic-book genre forever. Before, comics had served as a means to escape the burdens of everyday struggles. Superheroes let readers imagine the best versions of themselves, endowed with special powers, fearless in the face of danger, able to fix the world’s troubles. Even the underground comics movement, which started in the ’60s, lead by Pekar’s friend Robert Crumb, was swept up in another kind of escapism. Crumb and his colleagues embraced the counterculture with adolescent glee, their comics reveling in psychedelic drugs, rock ‘n’ roll, anti-establishment politics, and graphic sex.

Pekar couldn’t draw his way out of a paper bag, but artist friends like R. Crumb illustrated his tales in honest-to-life detail.

But before Pekar, no other comic-book writer had considered that real life and all its failures and humiliations could be fodder for those illustrated panels. Pekar, a neurotic who never took to the wild bohemian lifestyle, stuck to what he knew—car troubles, money worries, health concerns, awkward dates, and mind-numbingly dull errands. Even his panels about sex were unglamorous.

In that way, Pekar played a pivoted role in the history of American comics, serving as a bridge from the fun, convention-flaunting underground comics of the ’60s to the more thoughtful alternative comics of the ’80s and ’90s, such as Art Spiegelman’s acclaimed story of Holocaust survivors, “Maus.”

It’s all the more impressive because Pekar couldn’t draw his way out of a paper bag. With just words and rough stick figures, he would record an experience, say, a conversation he had in a grocery store. Then an artist friend, like Crumb, would illustrate the tale, in honest-to-life detail, emphasizing the bags under Pekar’s eyes, the round pouch on his belly, and even the dark hairs on his arms.

In the ’80s, Pekar’s luck began to change. He met Joyce Brabner after she sent him a fan letter in 1983, and she soon became his third wife. While their domestic squabbles were well-documented in “American Splendor” pages, the two were known for their fierce devotion to each other. 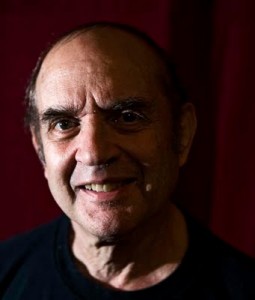 Later in the decade, Doubleday released two collections of “American Splendor” issues, and amid a flurry of publicity, Pekar landed on “Late Night with David Letterman.” Pekar wore all his insecurities on his sleeve, ready for a fight, turning his sharp wit on the host. Because this made for such good TV, Pekar was asked back several times before he attacked NBC’s owner General Electric—and then Letterman.

The same year that “American Splendor” ended its run, 1990, Pekar received a diagnosis of lymphatic cancer. The treatments were an incredibly agonizing experience for the couple, which he laid out, detail by detail, in his first full-length graphic novel, 1994’s “Our Cancer Year.”

In 2003, Pekar was once again thrust into the mainstream spotlight, with the debut of the award-winning film, “American Splendor,” starring Paul Giamatti. This biopic, with fictionalized scenes interspersed with real-life video clips, introduced Pekar’s life and work to a younger audience.

If you look around now, Pekar’s influence is everywhere. He paved the way for autobiographical comics like Chris Ware’s “Jimmy Corrigan, the Smartest Kid on Earth,” and Daniel Clowes’ “Eightball” (inspiration for the 2001 film “Ghost World”). The cranky eccentrics of “Seinfeld” and their observations on the minutae of city life owe a great debt to Pekar. Even the Twitter success story Justin Halpern could credit Pekar with his decision to record the blunt, expletive-laden witticisms of his 74-year-old dad.

Maybe if we all had access to brilliant illustrators (and the lack of vanity it requires to be drawn warts and all), our social networking quips and reflections could be made into art. But odds are, we’d never quite hit on the naked truths about the pain and isolation of ordinary human life that Pekar revealed so elegantly.