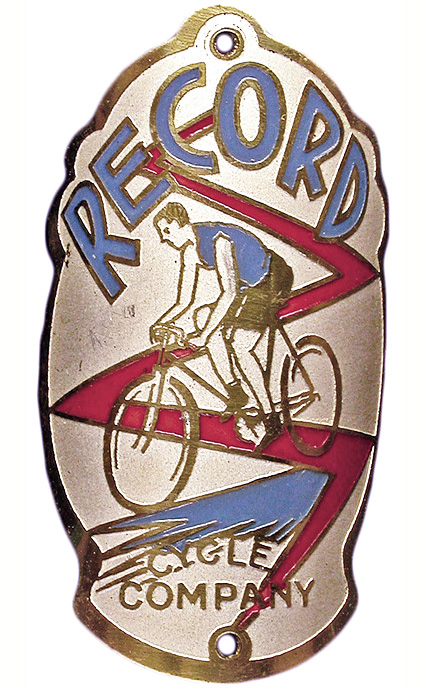 A badge for the Record Cycle Company, possibly from the Netherlands.

A badge for the Record Cycle Company, possibly from the Netherlands. 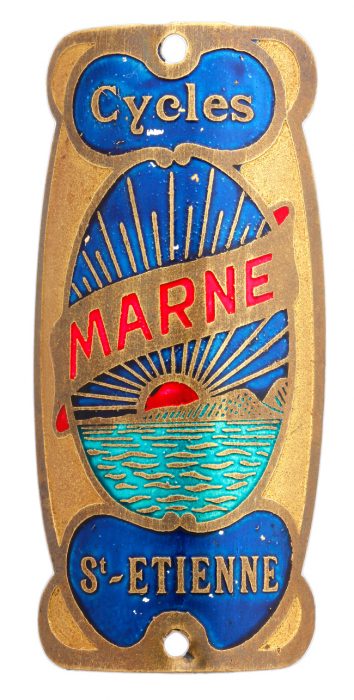 A Marne badge from Saint-Étienne, France. 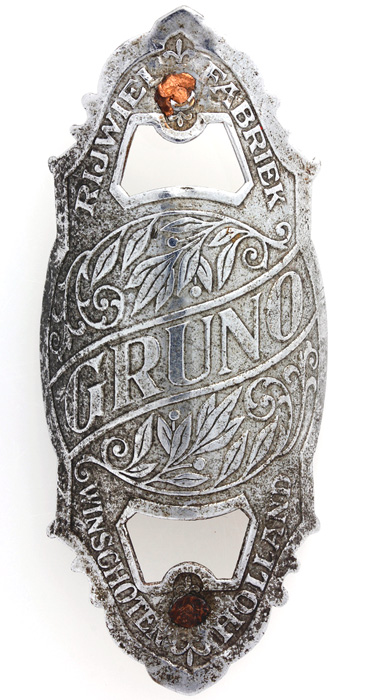 A badge for the Gruno bicycle factory, founded in 1897, in Winschoten, Netherlands. 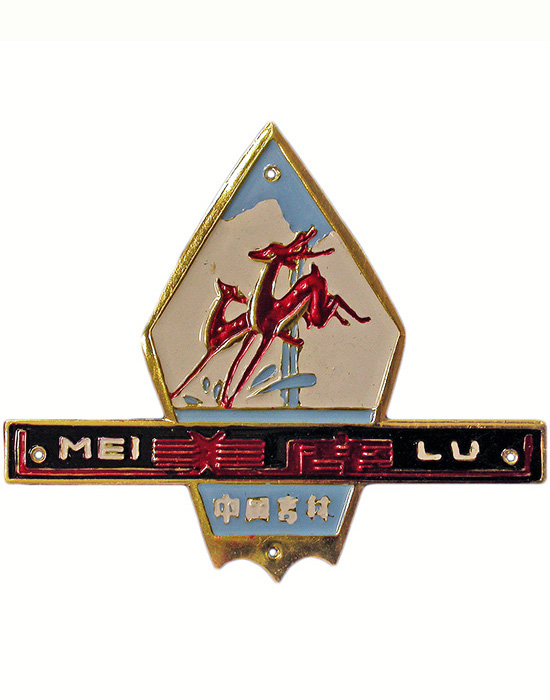 A badge for Mei Lu (Deer) bicycles from the Jilin province in China, possibly 1970s-'80s.

An aluminum badge for Pionier (Pioneer) bikes from the Netherlands, circa 1970s.

A badge for Hiawatha bicycles made by Gambles in Minneapolis, Minnesota, circa 1950s.

A badge for The World bikes made by Schwinn in Chicago, Illinois, circa 1930s-'40s. 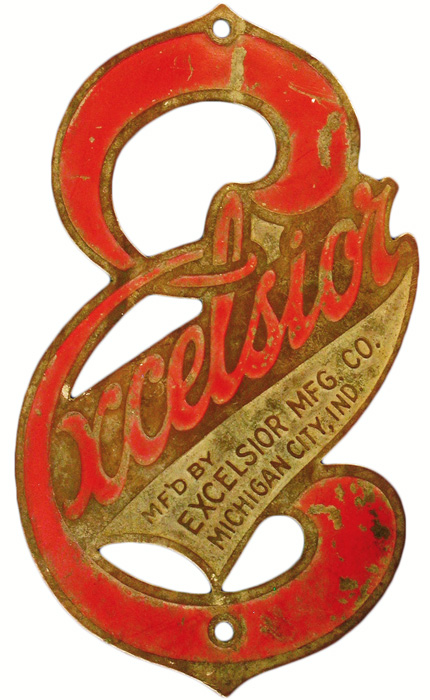 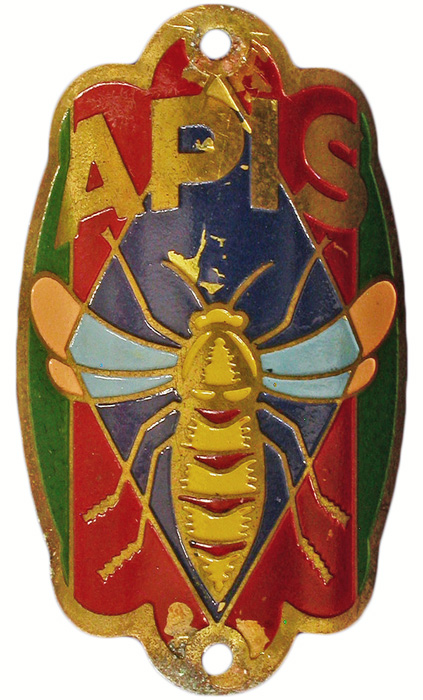 An Apis badge of unknown origin. 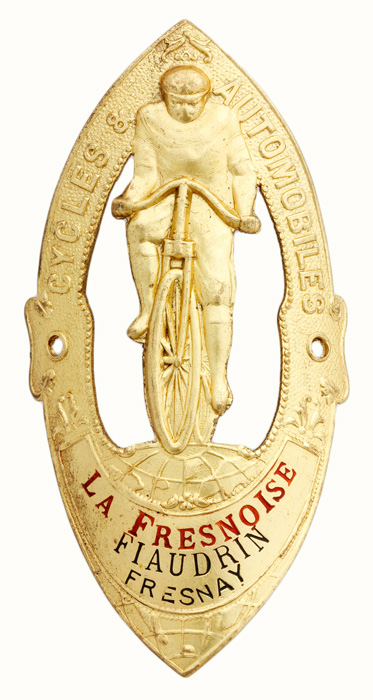 A badge for La Fresnoise from Fresnay, France. 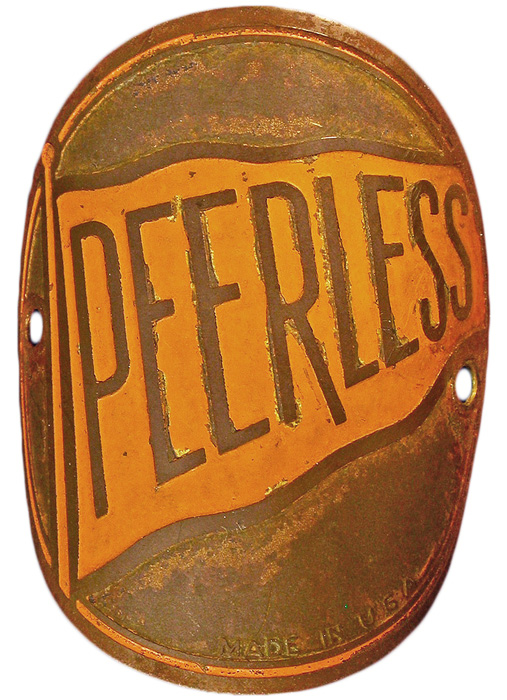 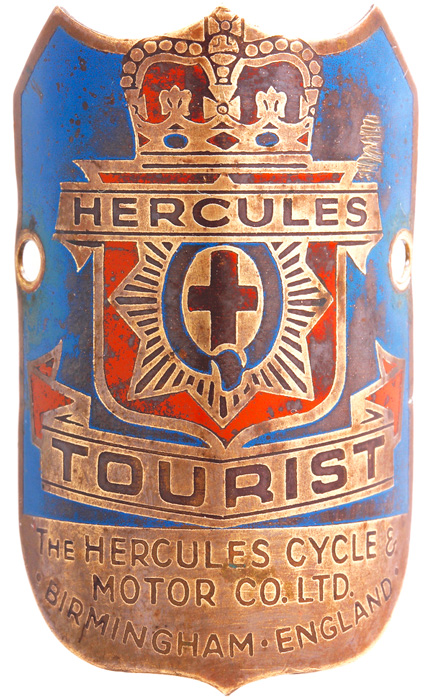 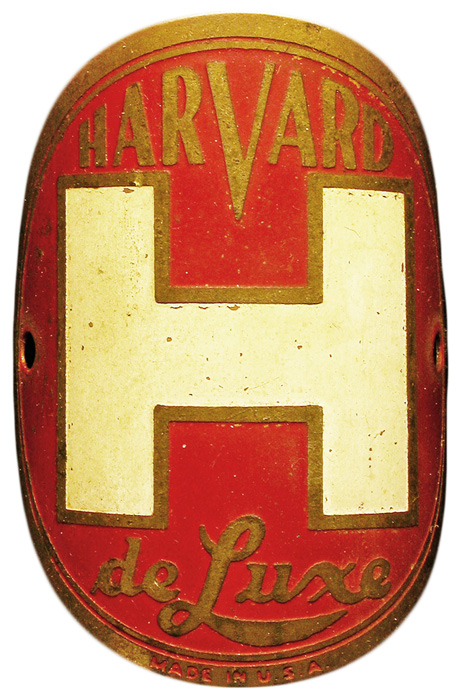 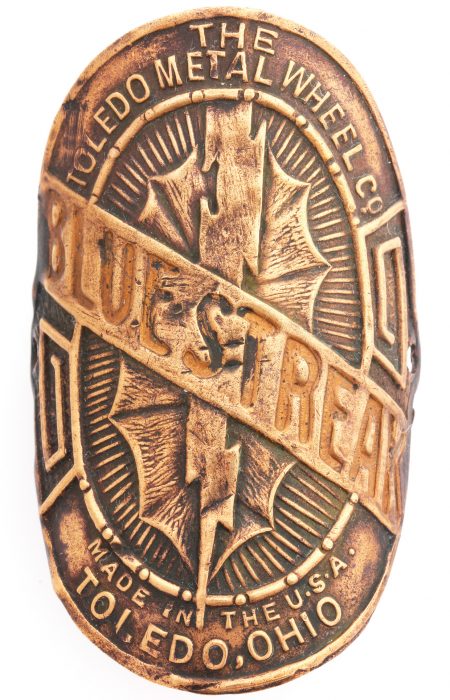 A copper headbadge for Blue Streak from Toledo, Ohio. 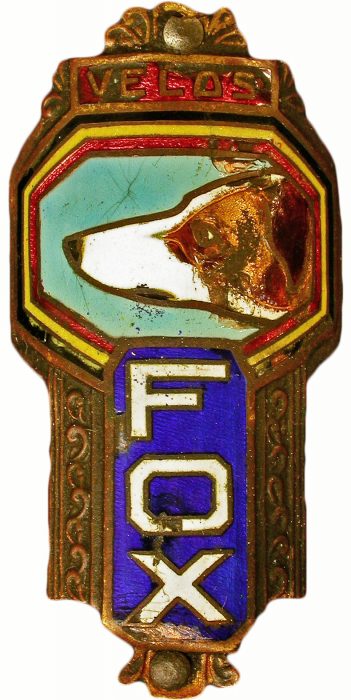 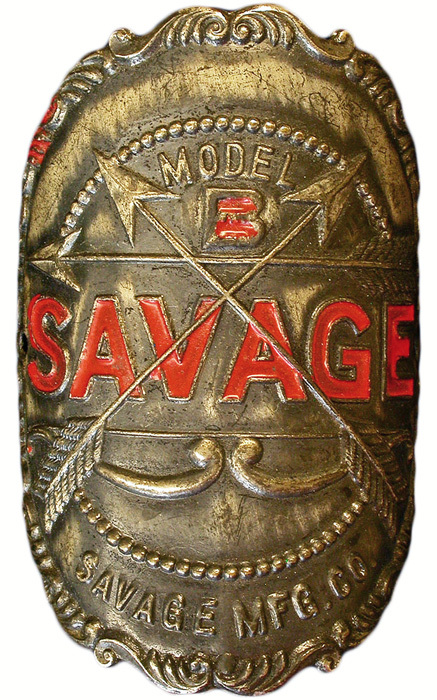 A badge for Savage "Model B" bikes, made in the United States pre-1930.

A brass cloisonné badge for Paris Cycles from Paris, France. 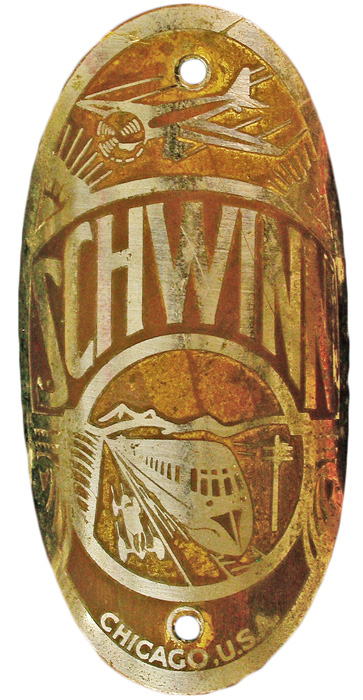 A Schwinn badge from Chicago, Illinois. 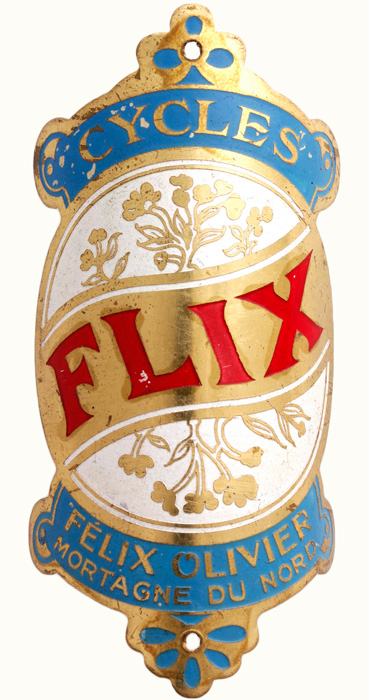 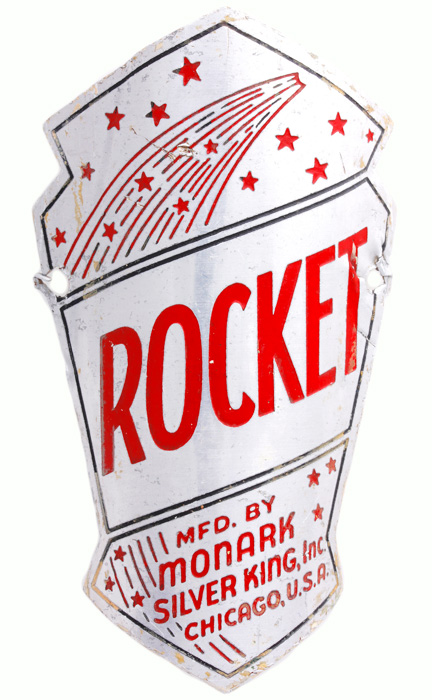 A Rocket headbadge made by Monark in Chicago, Illinois. 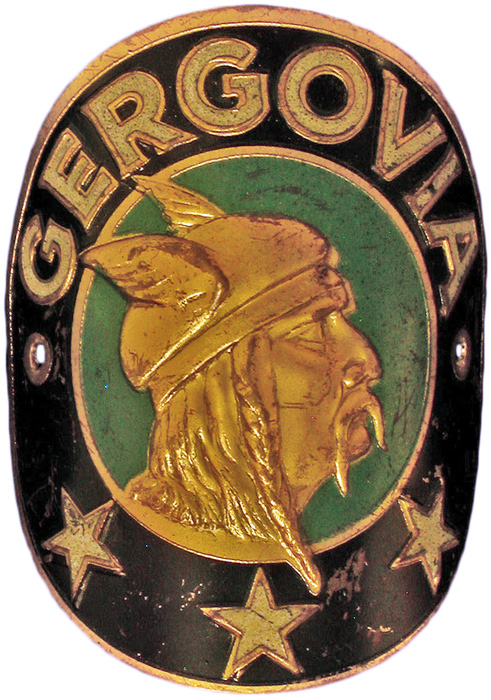 A Gergovia badge featuring a Viking warrior from Clermont-Ferrand, France. 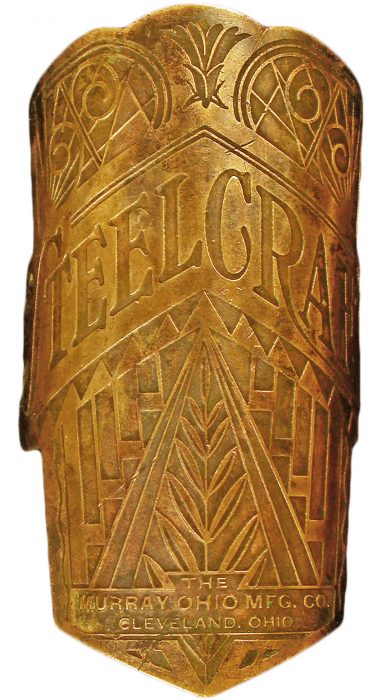 An Art Deco headbadge by Steelcraft from Cleveland, Ohio. 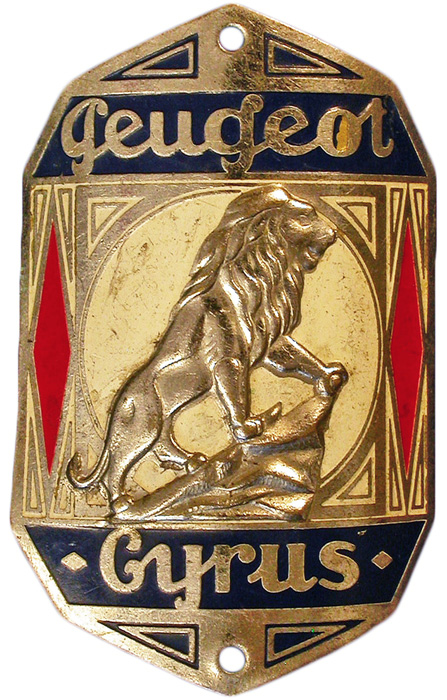 A Peugeot badge for Cyrus bicycles, referring to Cyrus the Great, made in France, possibly 1950s. 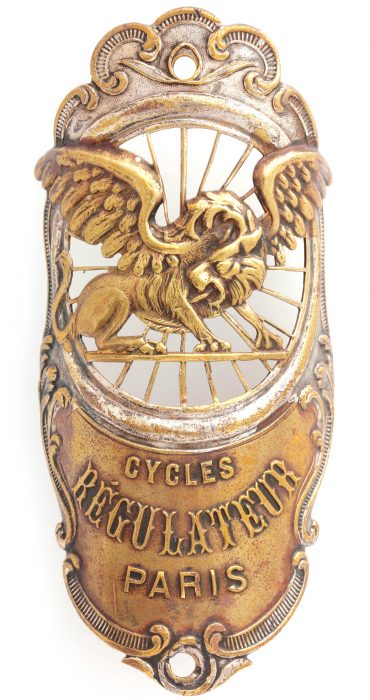 A Régulateur badge from Paris, France. 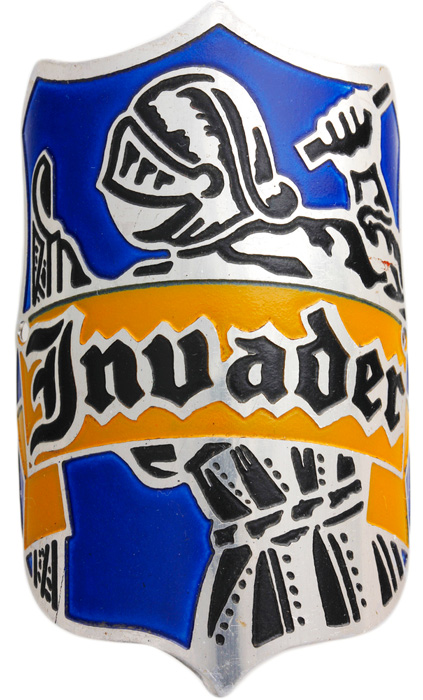 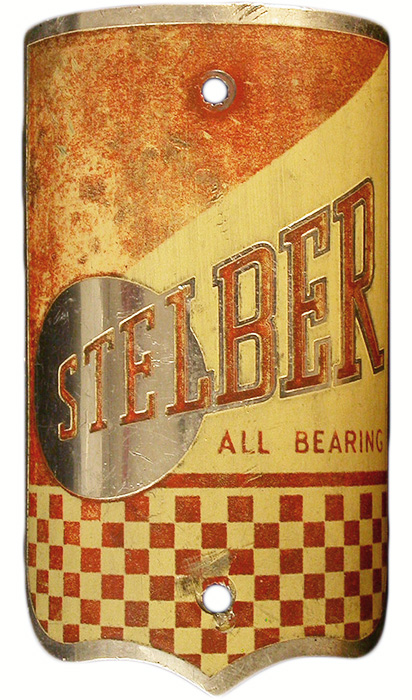 An aluminum badge for Stelber made in the United States.

A Meco badge from Borlänge, Sweden. 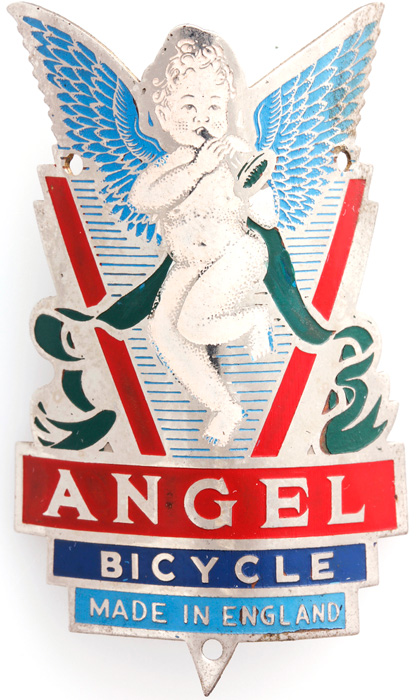 Conner believes this Angel badge might be an Asian knockoff of a British style, circa 1950s-'60s. 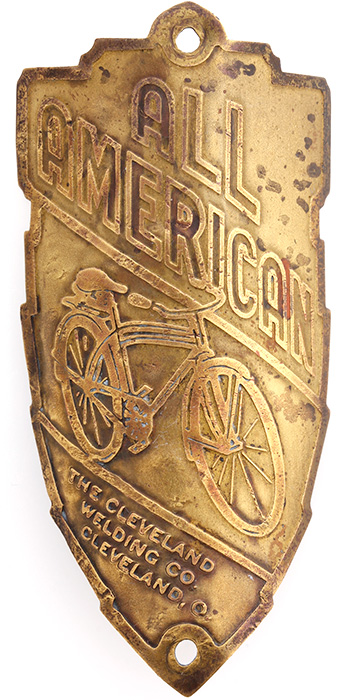 An engraved brass headbadge for the All American brand from Cleveland, Ohio.

Jeffrey Conner doesn’t remember exactly how he acquired his first bicycle headbadge during a post-college gig as a bike mechanic in Seattle, but he does know it was an English-made, Rocket-brand badge someone had spray-painted blue. The metal tag had originally adorned the head tube on a bicycle frame, and like other headbadges, it was probably the only surviving part from an older bike that had been mistreated or left out in the elements to decay.

“Even small towns had their own bicycle manufacturers.”

Long after leaving the mechanic job, Conner hung onto the little Rocket talisman, toting it with him as he moved across the country and embarked on a career as an evolutionary biologist. Only decades later did Conner realize that bike badges were available in abundance on eBay, and his casual interest quickly blossomed into an obsession.

Today, Conner has more than 1,000 headbadges in his collection, which he meticulously documents and shares on his personal flickr as well as a group for fellow collectors with more than 800 members. In 2016, Conner’s collection also became the basis of a small book entitled A Cycling Lexicon, featuring photographs of the badges alphabetized by brand name. Originally produced by Carter Wong design, the book was later republished by Ginko Press. 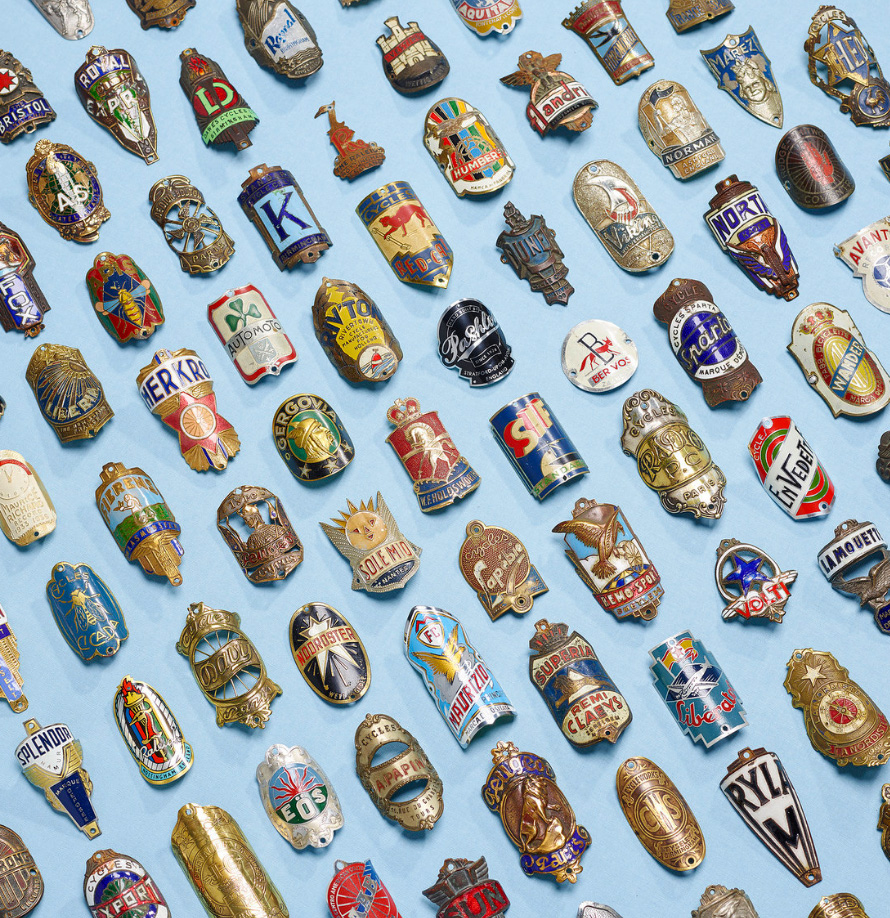 Top: A badge for the Record Cycle Company, possibly from the Netherlands. Above: A sampling of the headbadges in Conner’s collection. Photo by Michael Blann for “Roleur.”

Though the headbadge’s debut is a bit murky, its heyday aligned with the bicycling boom of the late 19th century, when hundreds of new bike companies popped up across the developed world to satisfy demand for the so-called safety bicycle. “Around the late 19th and early 20th centuries, in Europe and the United States, even small towns had their own bicycle manufacturers,” Conner explains. “French and Belgian badges often had their town’s name on them, but small bike businesses were scattered all over the place.” As competition increased, headbadges were adopted to give brands a unique identity and build customer loyalty.

In 1898, due to problems with oversupply and competitive pricing in the American bike market, dozens of manufacturers joined together to form a giant trust called the American Bicycle Company (ABC). Although ABC failed a few years later, other successful companies like Pope, Schwinn, and Raleigh followed its lead and bought up hundreds of small bicycle brands. “There was a tremendous consolidation in the 20th century, similar to the car industry,” Conner says.

As mom-and-pop bike shops were absorbed into larger conglomerates, the branded headbadge became even more important, offering manufacturers a way to differentiate their bikes from each other and also to brand unique models within their own product lines. “For example,” Conner continues, “by the 1950s, Raleigh had taken over most of the British bike industry, buying up nearly everyone else. But they kept using the headbadges for companies that they bought—Rudge, Phillips, and so on. Raleigh still sold those bikes using their original brand badges, while Raleigh-branded bikes almost all used a version of its classic heron badge.”

Many bicycle badges tended to showcase imagery associated with power, speed, and technology—including wild animals, scenic vistas, and futuristic machines. “The French and Belgian badges were often the most ornate and artistic,” Conner says, “with lots of mythological characters and detailed imagery, whereas the Scandinavian and American badges used more graphic, cleaner designs. Themes like airplanes, rocket ships, and trains were used all over.”

Ranging from under an inch to almost half a foot long, headbadges were mostly made from pressed or acid-etched metals like brass, copper, aluminum, zinc, or stainless steel. “Brass and copper were very common in the early years, as well as chrome- or nickel-plating over brass,” Conner explains. “They were often painted, or enameled with cloisonné. By the 1950s, companies started switching to aluminum because it was cheaper, but many badges were still painted.” 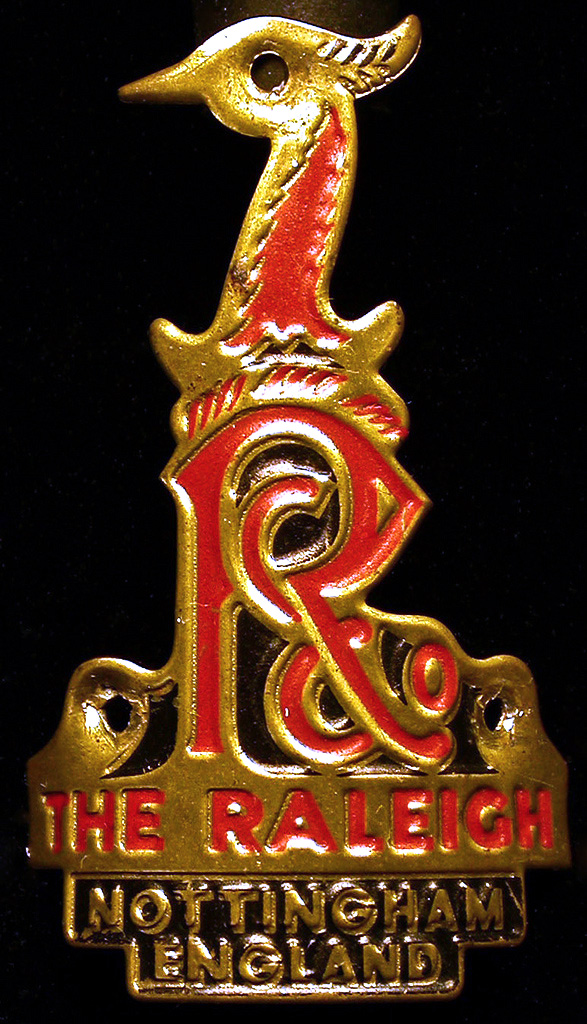 Traditional metal bike badges began disappearing in the 1970s with the advent of plastic decals. “Now, most manufacturers use a sticker or decal,” Conner says, “though a lot of the custom bicycle builders in the United States are making beautiful metal badges again. Rivendell is a pretty famous example. They make long-distance touring bikes out of steel and have different headbadges with great detail for every model.”

Of the many headbadges in his personal collection, Conner says he can’t choose a particular favorite because it’s like picking a favorite child—they’re all equally loved. However, he does recognize that some of the designs stick out more than others. “There’s an old one called Stormer, which has to be from the turn of the century or a little earlier, and I swear there are two places on the badge that show three sperm swimming toward an egg,” Conner says. “It’s like the sperm ‘storming’ the egg. The image is fairly subtle, but I can’t imagine it’s anything other than sperm and egg, and I’m a biologist so I know what I’m talking about here.”

Conner acknowledges that his collection has gotten so large, he sometimes can’t remember if he already owns a particular headbadge. “It’s a little silly,” he says. Yet nearly every time he searches, unfamiliar badges pop up that keep the collection growing, even if expansion isn’t his primary focus. “When I think about my goals, I think more about photographing and restoring,” Conner explains. “I know this is somewhat controversial in the antiques world, and my aim isn’t to get rid of all the patina, but if I can make a design clearer, then that’s what I want to do. They’re like little pieces of art, and that’s what art restorers do—try to make a painting or sculpture look the way the artist originally intended.” 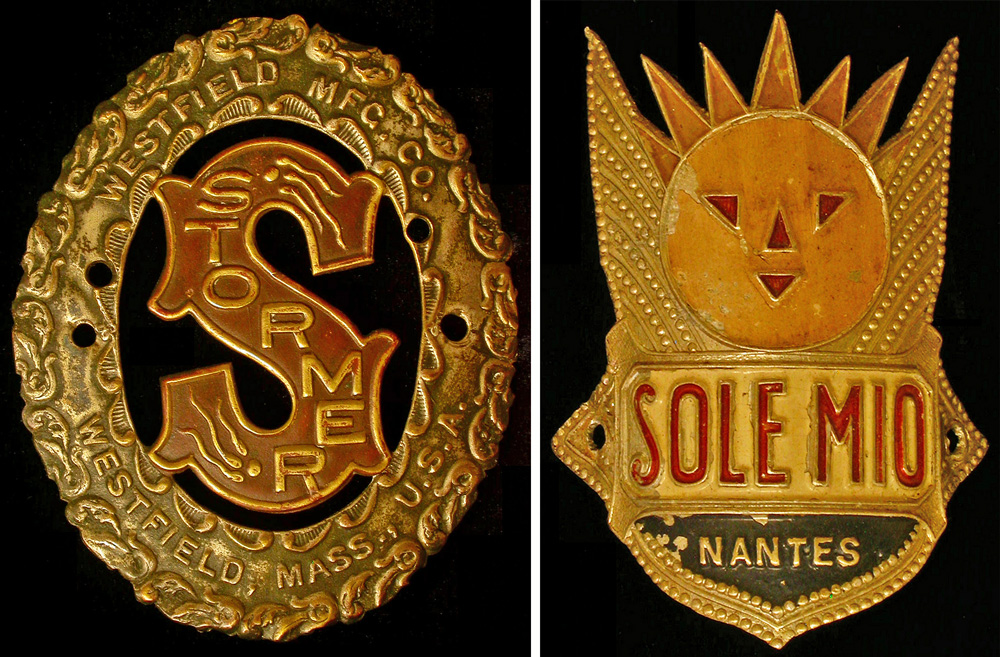 As a lifelong cyclist, Conner is also curious about the bicycle manufacturers behind these badges, though he’s found it is usually impossible to determine what happened to them. “Part of the problem is if I just have a brand name, sometimes they were used by multiple manufacturers—so there might have been somebody in upstate New York and someone in Cleveland naming their bikes the same thing,” Conner says. “College names like Harvard, Yale, or Princeton were very popular for badges, as were names referencing strength, so it’s hard to trace them. I don’t even know what country some of them are from.”

Even headbadges with detailed information can lead to dead ends, which sometimes have their own mysterious appeal. “I live near Kalamazoo, Michigan, and I have a badge from Kalamazoo that has an address on it,” Conner explains. “So I went to the address and there’s nothing there now—it’s an empty lot. But the city’s new bike path goes right by it.” 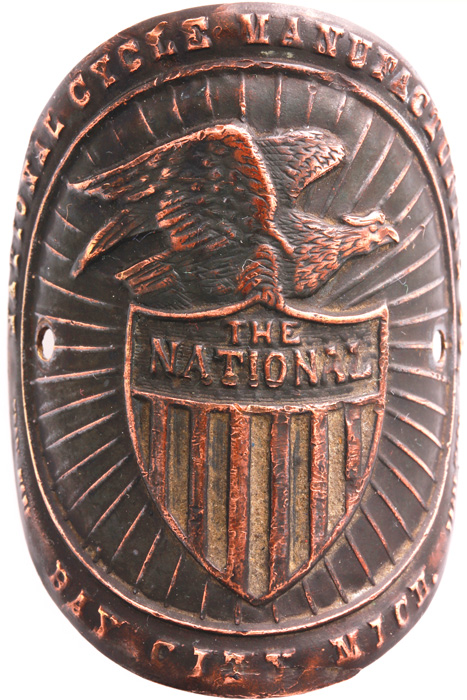 A headbadge for the National Cycle Manufacturing Co. from Bay City, Michigan, circa 1900.

(For more of Jeffrey Conner’s headbadges, check out the book, “A Cycling Lexicon,” or his flickr page. Except where noted, all photos courtesy Jeffrey Conner and Ginko Press.) If you buy something through a link in this article, Collectors Weekly may get a share of the sale. Learn more.

American Picker Dream, Part I: Mike Wolfe On His Love Affair With BikesDissecting the Dream of the 1890s: My Skype Date With Those Curious Neo-Victorians

BicyclesThe precursor to the modern-day bicycle was the 1817 Draisine, named for it…