How Jim Heimann Got Crazy for California Architecture 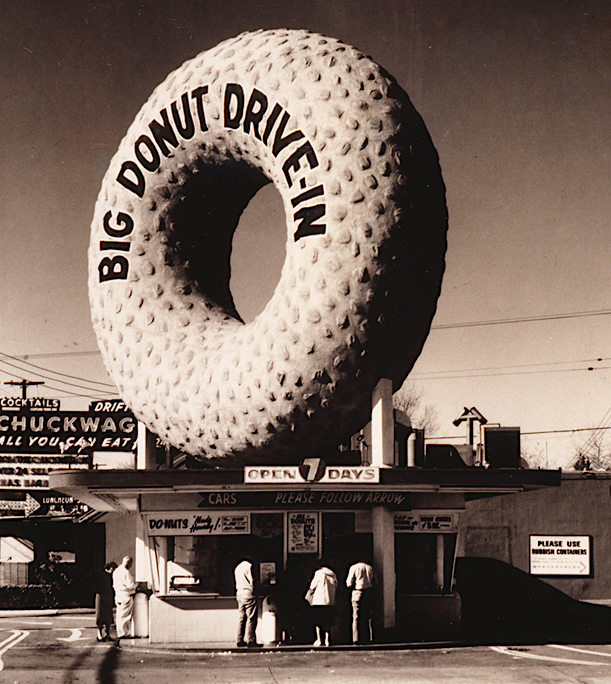 The year is 1958. A family in Westchester—a neighborhood in Los Angeles so close to LAX it appears as if the inbound planes are going to touch down in the neighbor’s backyard—has just left Mass at the Church of Visitation. It is time for another rite, their weekly Sunday drive.

On this particular Sunday, they drive a short distance to the Big Donut Drive-In, a favorite haunt. Located in Inglewood, not far from the 405 freeway, the Big Donut is like any other drive-in donut shop, except that it has a 33-foot dunker attached to the roof. Towering over the traffic on W. Manchester Boulevard, the gunite-and-steel torus was erected in 1953 and quickly became a local landmark.

“On any given Sunday, we’d just pile in the car and go for a ride.”

“We’d just pull up, order the donuts, and drive through,” recalls Jim Heimann, author of three books that use the phrase “California Crazy” in their title, and the world’s foremost collector of Programmatic Architecture photos and ephemera. Like any other kid, Heimann viewed the Big Donut with a sense of awe and admiration, but he had no way of knowing that it and countless architectural curiosities like it would become a major thread throughout his life.

The Big Donut, Heimann says, became “embedded in my mind because the scale of the building was so outrageous. As a child, I didn’t think too much about it, but, in reality, it formulated something that went much deeper.” That formulation included the urge to collect, which was already firmly established in Heimann at a young age. In particular, he had what he calls a “junk drawer,” into which he stashed collections of rocks, seashells, and toy trains, to name but a few of his acquisitive passions. “The collecting mentality was there really early,” he says. 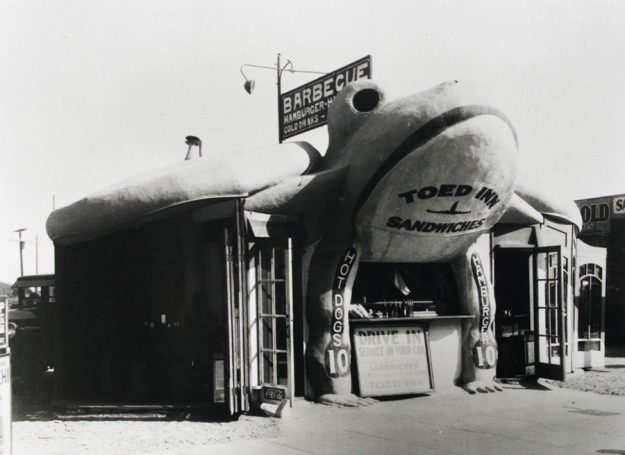 It was only later that Heimann would learn that the Big Donut is a part of a class of architecture that is variously called Programmatic, Roadside Vernacular, and Mimetic, the latter being a term stemming from the word mimicry. Mimetic Architecture is therefore characterized by its imitative quality, whether that imitation takes the form of a donut (the Big Donut), a dog (Pup Cafe), a pig (Pig Stand), a sphinx (Sphinx Realty), a toad (Toed Inn), a hat (Brown Derby), or a disembodied leg (Sanderson’s Hosiery). Often the mimetic architectural statement doubles as an advertisement for the business—if you pull into the Big Donut, there’s little doubt about what’s going to be on the menu.

Though not exclusive to Los Angeles or even California, the Golden State proved to be a fertile breeding ground for this style of architecture, which had its heyday in the 1920s and ’30s. As Heimann writes in his introduction to the most recent edition of California Crazy, “A bright economy, rampant speculation and inexpensive real estate, endless boosterism, the geographic layout of the region, and the acceptance and fostering of the car culture all combined to make an environment conducive to this building type.”

While the early 1900s saw its first real explosion of Programmatic Architecture throughout Southern California, the seeds were planted as early as the late 1800s, as people flooded into the state in search of gold, land, sunshine, and opportunity. “The lack of an architectural tradition and the motivation by transplants to start fresh and experiment brought an eclectic vision to the area,” Heimann writes. This resulted in a potpourri of architectural styles that included Aztec, English Tudor, Swiss Chalet, and the Mission Style, which became an important component of the Arts & Crafts movement. 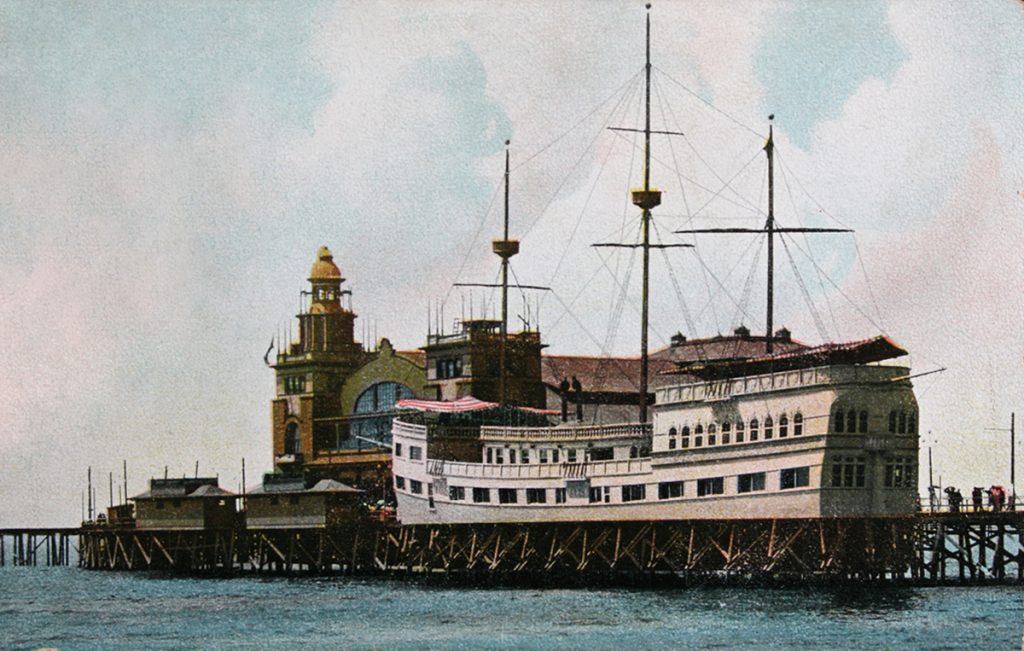 Abbott Kinney’s Ship Cafe on the Venice Pier, circa 1910.

In addition to the wide assortment of traditional architectural styles brought by the newcomers, an even fresher trend was developing up in state’s world’s fairs and amusement parks, which would have a direct impact on the development of Programmatic Architecture in California. “Unlike roadside architecture, which aimed to attract customers on the road via the unusual and unexpected,” Heimann writes, “architecture in these contained environments relied on the pedestrian and was for the most part an exercise in entertaining visitors by offering them something they couldn’t find elsewhere.”

For example, from 1904 to 1906, real-estate developer Abbott Kinney attempted to bring a touch of the exotic to his oceanside amusement park in Venice, California. The Ship Café (a boat-shaped restaurant), the Fish Stand (another boat-shaped eatery), and the Yelps (a structure that looked like a mountain) all contributed to what Heimann calls a “free-spirited architectural environment,” where visitors could travel from building to building on camelback or Venetian-style gondolas. Through his fantasyland-by-the-sea, Kinney demonstrated an attitude of experimentation and inventiveness that would be accelerated by other developers and entrepreneurs in the coming decades.

The Pan-Pacific International Exposition (PPIE) provided an even bigger boost to the proliferation of Programmatic Architecture in California. Held in San Francisco in 1915, PPIE celebrated the completion of the Panama Canal. Among the many exhibits was an entertainment area called the “Fun Zone,” which featured dozens of mimetic structures in the shapes of ostriches, telephones, typewriters, angels, and elephants. These multi-story structures were made possible through a combination of new stucco techniques and finishing materials made exclusively for PPIE. 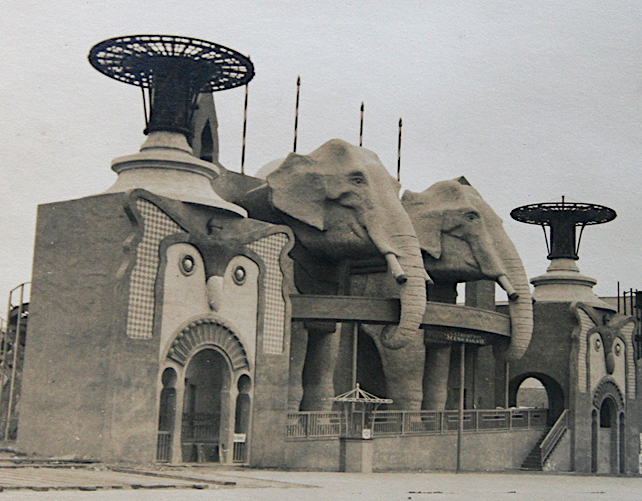 Film director D.W. Griffith, who was in town for a conference, noticed the mimetic structures and invited some of the craftspeople from the fair to help build the Babylonia set for his upcoming film, Intolerance. As Heimann writes in California Crazy, “Devoid of fences and positioned on the streets of Hollywood for all to see, the set became an instant landmark and set the tone for the intrusion of Hollywood fantasy on the urban landscape. In this way, whimsical programmatic architecture made its transition from exposition to Hollywood studio and ultimately to the California roadside.”

Around the time Heimann graduated Long Beach State, where he studied graphic design and illustration, he found an article in the November 30, 1969, issue of West magazine about Programmatic Architecture in Los Angeles, which author Larry Dietz called “Super-Realistic.” It featured a dozen-or-so color photographs taken by Mike Salisbury, the magazine’s art director. This was the first time Heimann had noticed anybody specifically addressing the buildings he’d loved as a kid, glimpsed from the back seat during all those Sunday drives, as an official architectural style. “That was instrumental in my awareness,” he says of the article in West. “It predates my research.” The article proved a light bulb moment, causing his collecting mentality and interest in Programmatic Architecture to coalesce. 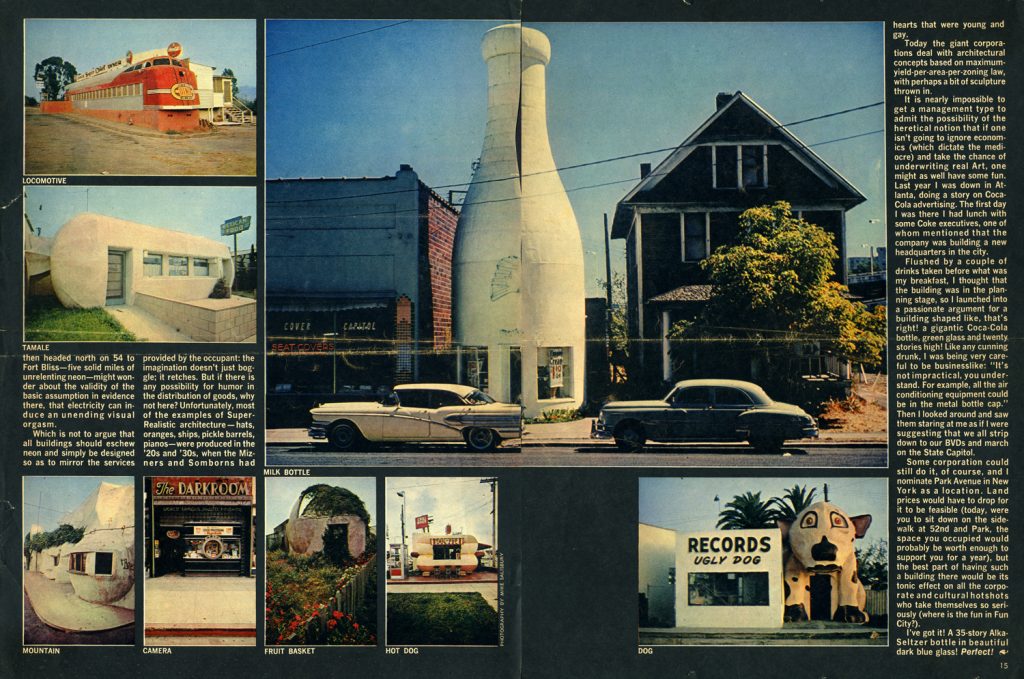 A spread from the November 30, 1969, issue of West magazine: text by Larry Dietz, photographs by Mike Salisbury.

Over the next few years, Heimann began researching Programmatic Architecture in earnest. To that end, he became a regular at the Rose Bowl flea market and other local swap meets, an activity he pursued diligently over the next 50 years, only coming home empty-handed twice. At the Rose Bowl, Heimann occasionally found a snapshot of an example of Programmatic Architecture, but he found hundreds of match covers, postcards, menus, and other paper ephemera for places like the Brown Derby, Tam O’Shanter, Pig Stand, Toed Inn, Giant Orange, and Big Cone, which was a building in the shape of a giant ice cream cone turned upside down. The match covers, in particular, were instrumental in finding addresses and locations for various structures. The flea markets led to postcard shows and antiquarian book fairs, where additional material was collected. In this way, Heimann built one of most impressive private collections of photographs and ephemera in California, if not the world.

A few of these buildings had survived into the 1960s and ’70s, but most had been torn down. The reason, Heimann believes, is that it’s tough to convince an insurance business or real-estate company to move into a building shaped like a giant shoe or a pumpkin. It probably made more sense to demolish the structure, however charming it may have been, and start from scratch. 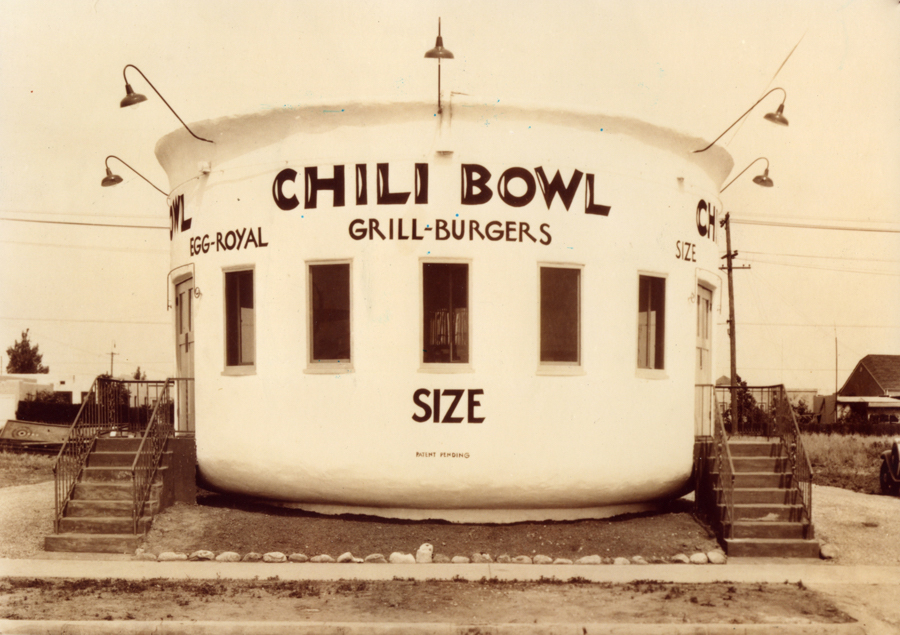 Thankfully, one of Heimann’s all-time favorites was still around in the 1970s when he was beginning his serious research into Programmatic Architecture. That was the Chili Bowl, which was the brainchild of Arthur Whizin, an ambitious and entrepreneurial business owner who owned a couple of food-service businesses, including a series of Chili Bowl restaurants—shaped, naturally, like chili bowls—scattered across Southern California. As a kid, Heimann remembers seeing the “great big sign” at Whizin’s Cornell Corner on one of his family Sunday drives. “We’d be driving out towards Ventura, and there was nothing for miles. Then, you’d come to Agoura, which was where Whizin’s Cornell Corner was. It was a landmark.”

Heimann’s first book, California Crazy: Roadside Vernacular Architecture, was released in 1980 and stayed in print for almost 20 years. Nearly 40 years later, Taschen, for whom Heimann is the Executive Editor, published California Crazy: American Pop Architecture, a greatly-expanded version of the original book and the culmination of Heimann’s lifelong obsession with Programmatic Architecture. That’s some serious scholarship, yet it all began with those formative Sunday drives. “Those trips,” Heimann says, “seeing all that stuff along the road, helped me when I was doing my research. On any given Sunday, we’d just pile in the car and go for a ride.”

Modernist Man: Jock Peters May Be the Most Influential Architect You've Never Heard Of

Who Killed American Kitsch?L.A.'s Wildest Cafeteria Served Utopian Fantasy With a Side of Enchiladas 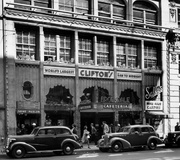 Food SignsBefore radio and television commercials, signs were the medium of choice to…

Architectural AntiquesOnce upon a time, before buildings were cheaply mass-produced of little mor…