How We Used to Give Thanks in Wartime 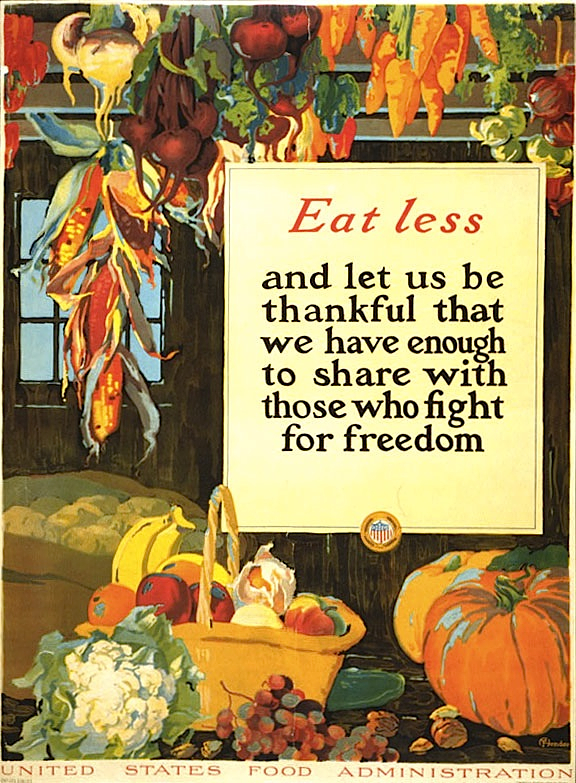 Earlier this month, while browsing the Library of Congress website for Armistice Day images, we came across this provocatively titled 1918 lithograph, created by an artist named A. Hendee and printed by Edwards & Deutsch of Chicago for the United States Food Administration. That agency was established in August of 1917 by the Food and Fuel Control Act, which was designed to, among other things, keep grain prices low so food would be more economical to distribute to the Allies in Europe. The act also restricted the use of grains in alcoholic beverages, making it a catalyst for the 18th Amendment in 1919 and the Prohibition era that followed.

“Eat less” was actually the second poster to use Hendee’s fall-harvest background. The first version was printed in 1917 when the Great War was at its most terrible, its message an unambiguous finger-wag at all who saw it: “This is what God gives us,” the text on that poster began, “what are you giving so that others may live? Eat less wheat, meat, fats, sugar – send more to Europe or they will starve.” No month and date are given on the Library of Congress website for either the 1917 version or this one from 1918, but the fall-color palette, as well as the use of the word “thankful” in the text, suggests that Food Administration officials were thinking ahead to Thanksgiving. By then, of course, the war was over. Today, this simple exhortation for shared sacrifice might sound alien to Americans fortunate enough to have gone unscathed by more than a decade of fighting in Iraq and Afghanistan, but much of the planet is all too familiar with the concept of having to do without.

Women and Children: The Secret Weapons of World War I Propaganda Posters

WWII War Paint: How Bomber-Jacket Art Emboldened Our BoysGuts and Gumption: Vietnam Helicopter Pilots Wore Their Hearts on Their Helmets

Thanksgiving PostcardsThanksgiving is a beloved holiday, and it’s easy to see why. Families and f…