Flashback: Lamps for The Early American

This article focuses on the history of the oil lamp, describing multiple examples. It originally appeared in the June 1942 issue of American Collector magazine, a publication which ran from 1933-1948 and served antique collectors and dealers.

When one considers that man is the one animal who depends on artificial light for getting about in the dark, it is surprising to learn how very slowly he developed this attribute of material civilization. For the lamps mentioned in the New Testament parable of the five wise and five foolish virgins were of the same type as the betty or phoebe used by the colonial housewife in America when, by its smoky flickering light she judged the state of the family supper steaming in its iron kettle in the kitchen fireplace. 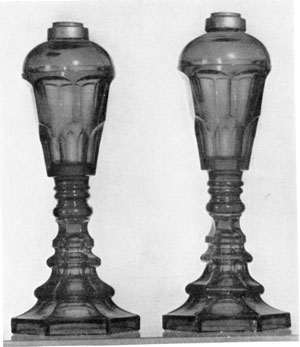 Glass Lamps from Sandwich: Of cobalt blue in color, these pressed glass lamps were originally used for whale oil. They are typical of the vase shapes made between 1830 and 1845.

Indeed, from prehistoric times through the first quarter of the 19th Century A.D. the lamp of the average citizen was a shallow little dish, filled with oil or grease in which a wick or rag floated. Such a device produced a little light and a lot of carbon. Nevertheless, human beings seem to have been reasonably content with it, for the floating wick lamp can measure its years in millenniums; its descendants evolved considerably less than two centuries ago.

Today the collector who wants an antique lamp or two for practical use in his home will probably leave the floating wick examples for the specialists and choose either the whale oil or kerosene types. Both came into use in the 19th Century. This does not mean that devices for better lighting had not been thought of earlier. The 15th Century genius, Leonardo da Vinci, made valuable experiments that bore fruit centuries later.

In the 18th Century, Aime Argand (1755-1803), the Swiss chemist who spent most of his working years in England, invented the first lamp with a burner that admitted air to the flame. This was of course necessary with any type other than the floating wick kind, since without oxygen the result would either be an explosion or no flame. Argand also discovered the importance of a glass chimney, when he placed the broken neck of a bottle over a flame in the course of his experiments and found that a clearer, steadier light resulted.

Like many other important discoveries, the general public failed to pay much attention to it at the time, although the oversize chimney, commonly known as a hurricane glass and used to protect the flame of a candle from sudden gusts of wind or drafts, probably got its inspiration from it. Lamps, however, remained guiltless of chimneys until after the discovery of kerosene in Pennsylvania in 1859. Coal oil had been produced in England some years before that. Better fuel gave rise to more and better lamp inventions until in the 1860s the kerosene lamp with flat wick and patent burner was brought to perfection.

It had arrived late and before many years was due to be elbowed out of the way by gas and electricity, since the revolution in artificial lighting was under way at last. But that is another story. The collector of these old lamps is interested primarily in their beauty of form and detail of workmanship.

The whale oil lamp, equipped with from one to three metal tubes for holding its circular wicks, was to be found in the average household as early as 1825. It was made of glass, pewter, tin, and sometimes brass. Antique lamps of pewter belong to the whale oil period, since this really beautiful alloy was out of favor by the time the kerosene oil lamp appeared.

In glass, the earliest were of the blown variety with goblet base. With many examples the oil reservoir bears a marked resemblance to an early electric light bulb both in shape and thinness of glass. Whale oil lamps of pressed glass were also made at Sandwich, Massachusetts, and other glass houses from about 1830 on.

They were of various colors, yellow, blue, amethyst, and opal. The pair illustrated are cobalt blue, and of Sandwich provenance, and ciao between 1835 and 1845. Their vase shape form is typical of glass lamps of the period. Their original burners with perpendicular metal tube wick holders are missing. This is not unusual, for just as we now adapt such lamps for use with electricity, back in the 1860s many thrifty households had them fitted with the proper burners for kerosene.

Pewter whale oil lamps which were presently superseded, along with other metal lamps, by the colorful glass ones turned out be the various glass houses, follower the general design of the candle stick, except for those intended to be carried or hung on a side wall. With the latter type, the reservoir was bowl or jar-shaped with broad base and a bail for carrying. (See American Pewter by J. B. Kerfoot Fig. 352, 353, 354.) According to this authority, pewterers who made these lamps were not over careful to mark them.

Therefore examples with the maker’s touch mark are rare, except for those of Roswell Gleason, Eben Smith and Caper Molineux. Other touch marks which may occur, though rarely, are those of Israel Trask, Boardman, and Calder. Also, pewter lamps are known to have been made at Brook Farm, that interesting experiment in intellectual communism, from 1841 to 1847.

The varieties and types of glass lamp in both the whale oil and kerosene periods can only be touched on lightly here. The techniques of blown, cut and pressed glass were all used. And as with candle sticks, both clear and opaque glass was in favor. Of the examples designed for the use of kerosene, those in overlay glass were very beautiful and are sought after by the collector today. Their best years were from 1860 to 1880. (For clear am detailed information regarding 19th Century glass lamps see Sandwich Glass by Ruth Webb Lee and American Glass by George S. and Helen Mc Kearin.)