Lucite in the Sky with Diamonds 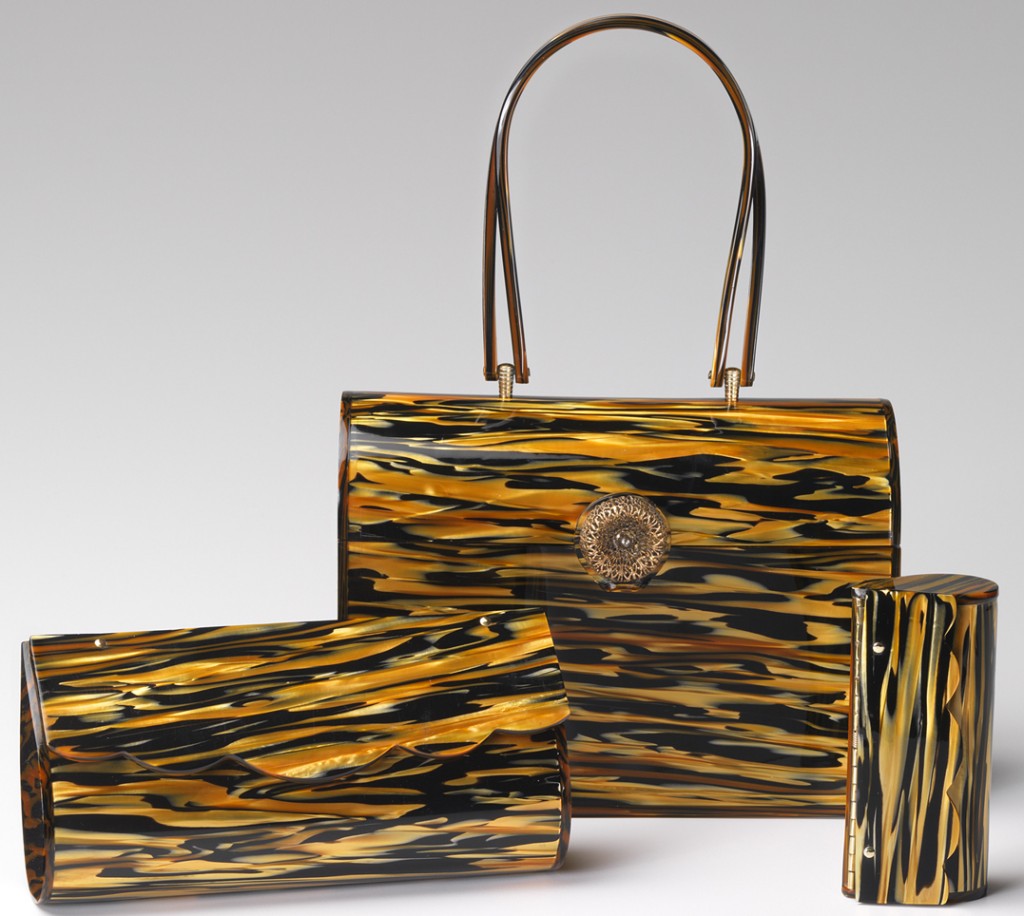 Of all the fashion accessories of the 1950s—Ray-Ban sunglasses, Pucci scarves, Eisenberg cocktail rings—none were more dazzling than Lucite handbags. These geometric gems, which in retrospect seem to anticipate the exuberance of the 1960s, were like portable jewel boxes turned inside out, in hues that ranged from basic black to pretty pastels to clear. Some purses were made of laminated Lucite, sealing butterflies, raffia, and multi-colored confetti within their rigid plastic sides. Others were studded with rhinestones, or even hand carved, using techniques handed down from the ivory trade.

“Hmm… old Wilardy inventory, that was certainly an offer I was not going to refuse.”

One of the foremost authorities on Lucite handbags is Janice Berkson, proprietor of a vintage jewelry and handbag shop called Deco Jewels in New York City. Her book, “Carry me! 1950’s Lucite Handbags an American Fashion,” published by ACC Editions, with eye-popping photographs by John Bigelow Taylor, is an invaluable guide to this art form.

Berkson has had her own invaluable guides to hard-plastic purses. The first is writer and editor Robert Gottlieb, whose “A Certain Style, the Art of the Plastic Handbag, 1949 – 1959” was written with Frank Maresca and published by Knopf in 1988. Gottlieb and Maresca’s book kindled Berkson’s love affair with Lucite. 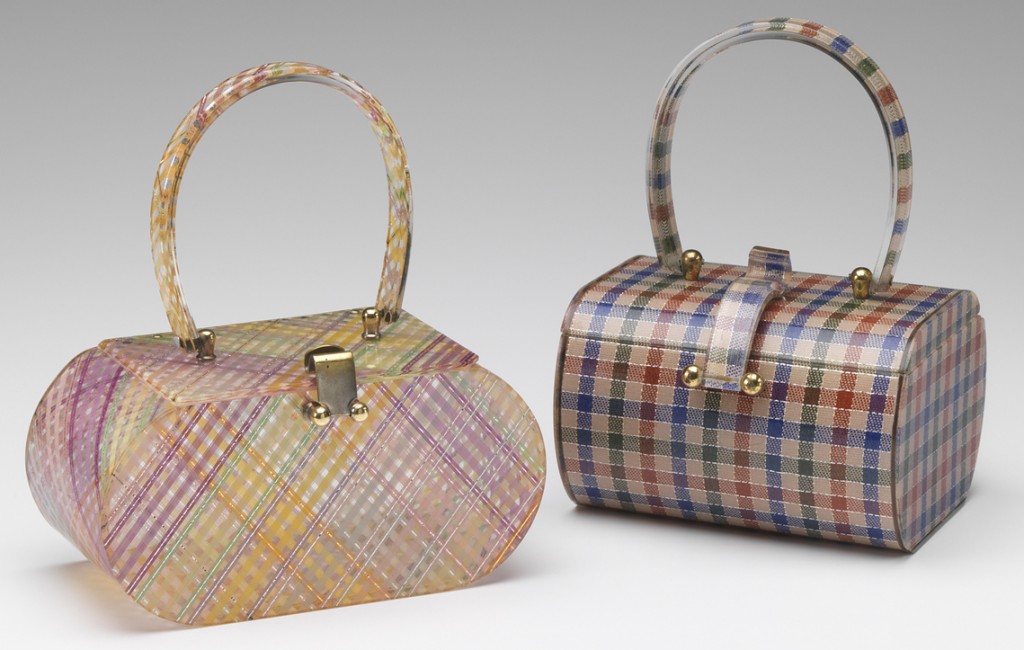 Above, a pair of laminated Lucite handbags by Wilardy (style #876 on the left, #750 on the right). At top, a Tiger clutch, lunchbox purse, and lipstick holder, also by Wilardy.

“If you know Bob Gottlieb,” says Berkson, who does, “you know he has a keen eye and loves buying quirky and unusual items. I believe it was around 1980 when Bob found and purchased his first bag at an antiques store. He thought it was such a bizarre object, but as time went on and he found other equally bizarre styles, he became hooked and his collection was born.”

The other mentor is Will Hardy, the man behind Wilardy handbags. Berkson’s introduction to Hardy came completely out of the blue when, in 1995, he called her at her store. “He asked if I would like to visit him on the Cape to look at a collection of his handbags that he wished to sell,” Berkson writes. “Hmm… old Wilardy inventory, that was certainly an offer I was not going to refuse.” Berkson doesn’t remember how many handbags she bought from Will Hardy that day (in her book she allows that it emptied her bank account), but she can say that in the years since, she has “purchased everything he was willing to part with.” 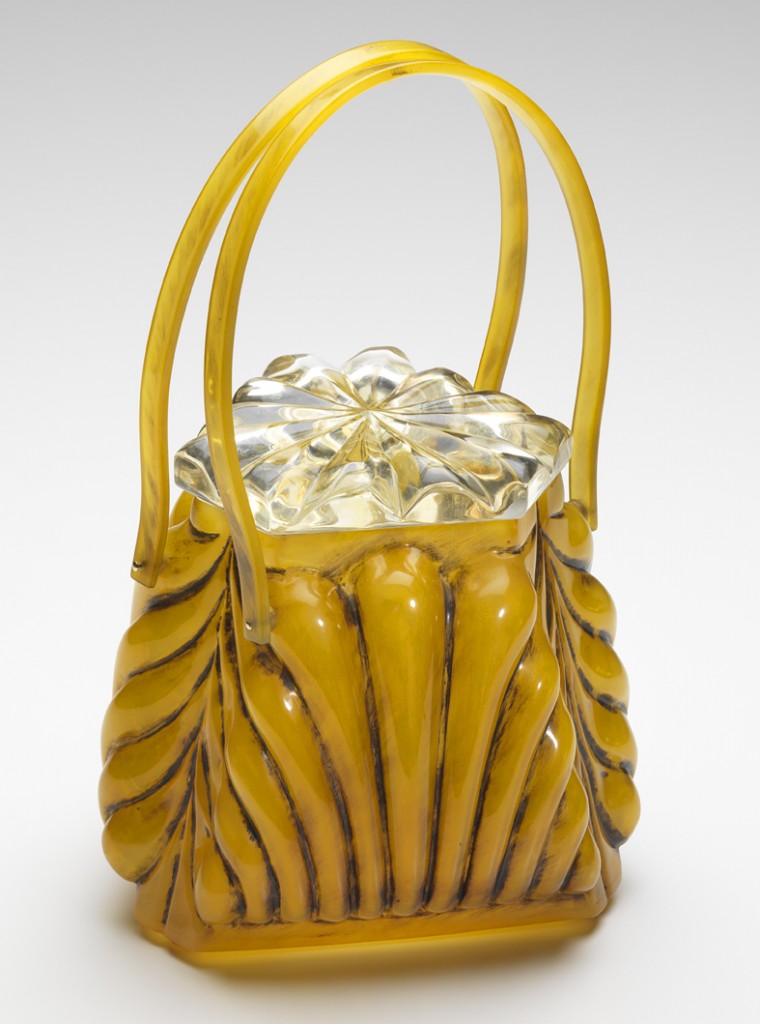 Llewellyn was known for its carved Lucite bags, as well as ones like this one made from shell, a hard plastic material composed of cellulose acetate.

By 1995, Berkson knew what she was looking at. She knew, for example, that Hardy had first used Lucite in handbags while working for his father. His materials were salvaged from the damaged nose cones of airplanes that had been scrapped after World War II.

Wilardy was not the only company working with Lucite. Associated Plastics, which made “shell” frames for handbags in 1946, soon began making handbags entirely of “plastic” under the name “Gilli Originals.” Another New York company, Maxim, was advertising its Lucite handbags as early as 1947. These rectangular bags were made in shell, butterscotch, white, and black. 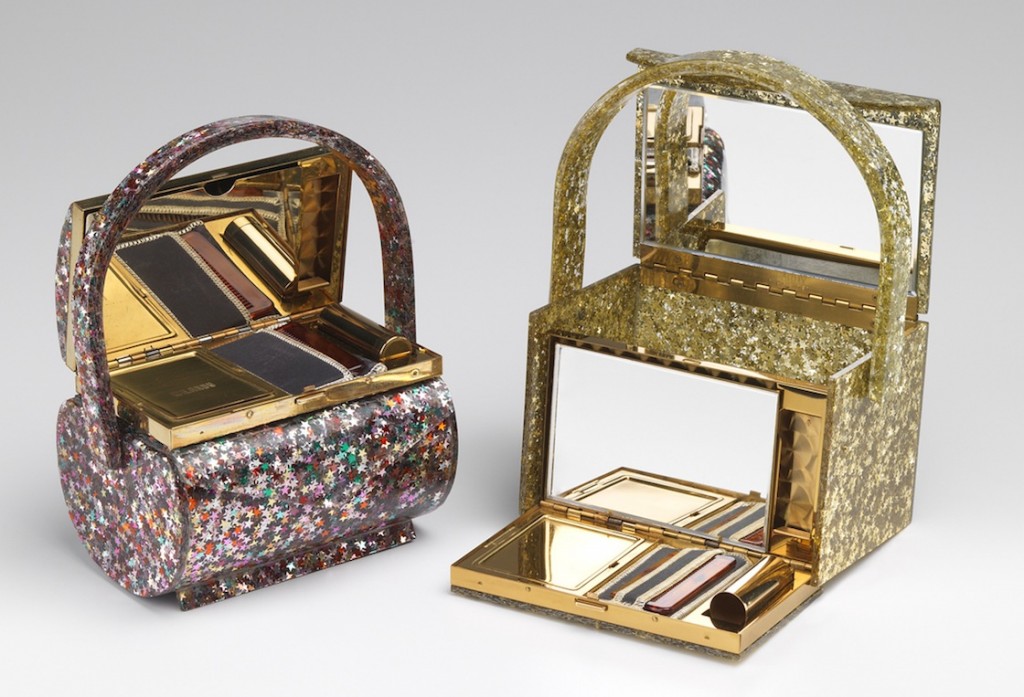 Vanity purses laminated with colored or gold glitter, such as these examples from Wilardy, were popular throughout the 1950s.

Alert readers may have noticed the repetition of the word “shell,” which, says Berkson, usually “refers to the tortoise- or caramel-colored hard plastic material made of cellulose acetate.” In some cases, though, shell is also used to describe the tortoiseshell color of a Lucite bag. “Lucite,” says Berkson, “is DuPont’s trade name for an acrylic resin. I do not know if DuPont originally marketed their material specifically to handbag manufacturers, but once the handbags became popular, DuPont expanded their line making special colors and laminates.”

One of the most inventive of the early Lucite handbag makers was Llewellyn Bley, whose bags were carved to create Art Deco angled stripes or organic Art Nouveau designs. Llewellyn embellished its globe, basket, and pagoda-shaped bags with gold filigree, while one of its most famous bags, the Beehive, featured a lid adorned with a trio of brass bees. 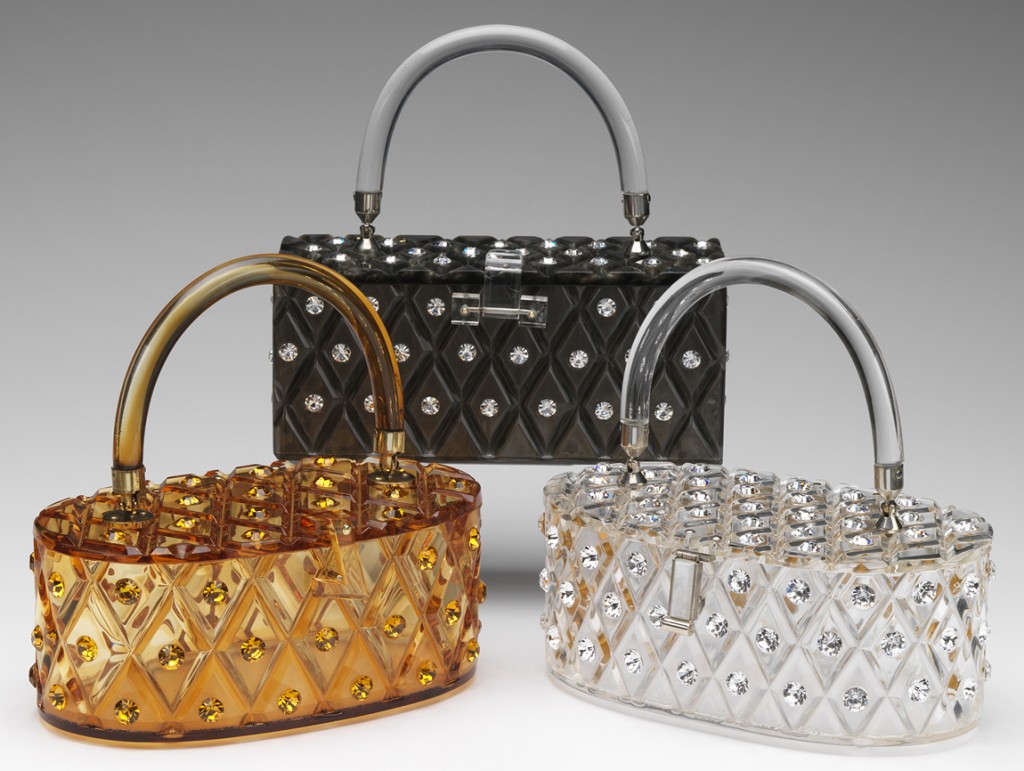 A trio of Maxim bags, each carved in a diamond pattern and dotted with rhinestones.

Llewellyn also produced hard bags that seemed to be soft, such as the inverted-fan-shaped bag that sits on clear ball feet and whose sides appear to be pleated. Llewellyn’s Conestoga Wagon purse resembles a duffle bag that is taller at either end where it’s attached to a pair of twisted strap-like handles.

Other manufacturers went absolutely nuts with color. Wilardy made handbags that glowed green or lavender in the dark. Charles S. Kahn of Florida produced bags in the shapes of hat boxes, barrels, drums, and cylinders in emerald, cobalt, cranberry, raspberry, and gold satin-finish Lucite. Myles Originals, also of Florida, used a material called Lamoplex to create a crushed-crayons effect. 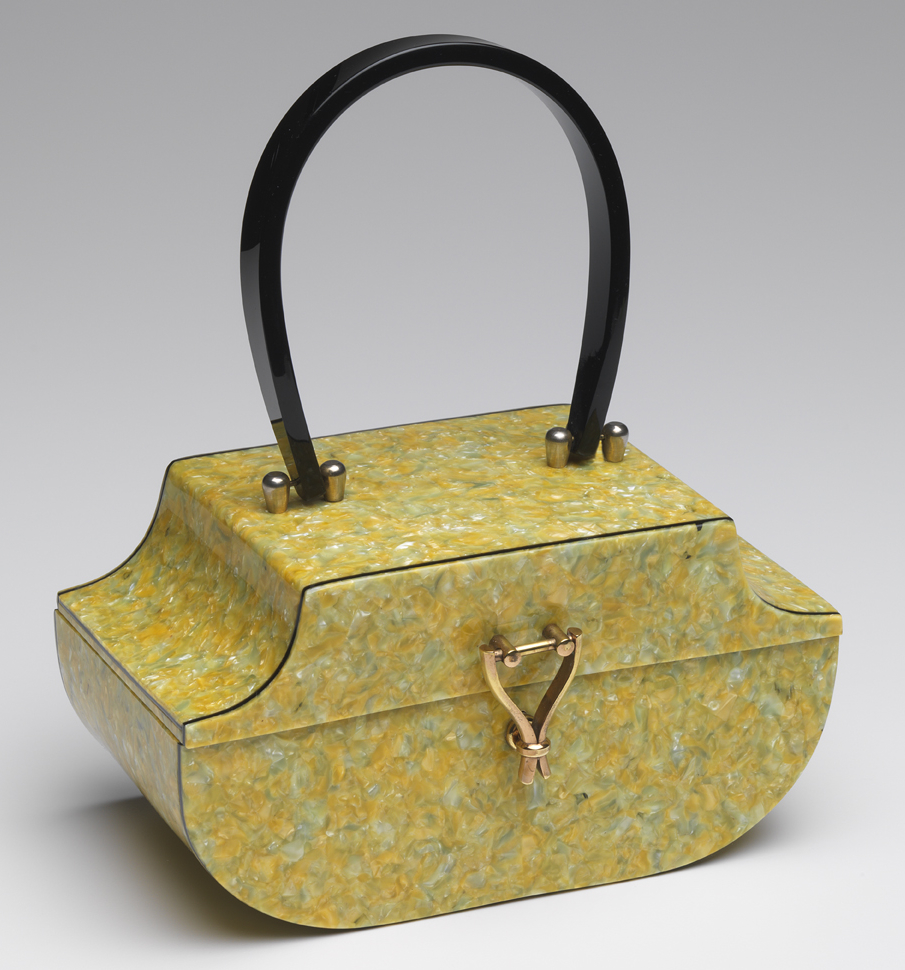 This yellow and green “crushed crayons” bag was made of Lamoplex by Myles Originals of Florida.

In addition to working with Lucite, Florida manufacturers were able to construct bags of cellulose nitrate, a plastic material that was illegal in New York because of its high flammability. This alternative to Lucite was used by Miami Handbag Mfg., Inc. in its Patricia of Miami and Bag By Benné lines—as if to prove New York safety laws correct, a worker using a dull electric saw on a brand of cellulose nitrate called Everplex started a fire that destroyed the plant.

But the effects Lucite handbags are perhaps best known for were achieved by lamination. “In my opinion, Wilardy did that best,” says Berkson. Silver, gold, or multi-colored confetti and stars were favorite fillings to sprinkle between sheets of clear Lucite, as were gold and silver threads, which gave the bags an almost fabric-like appearance. Basket-weave fabric also softened hard edges, as did pastel plaids. 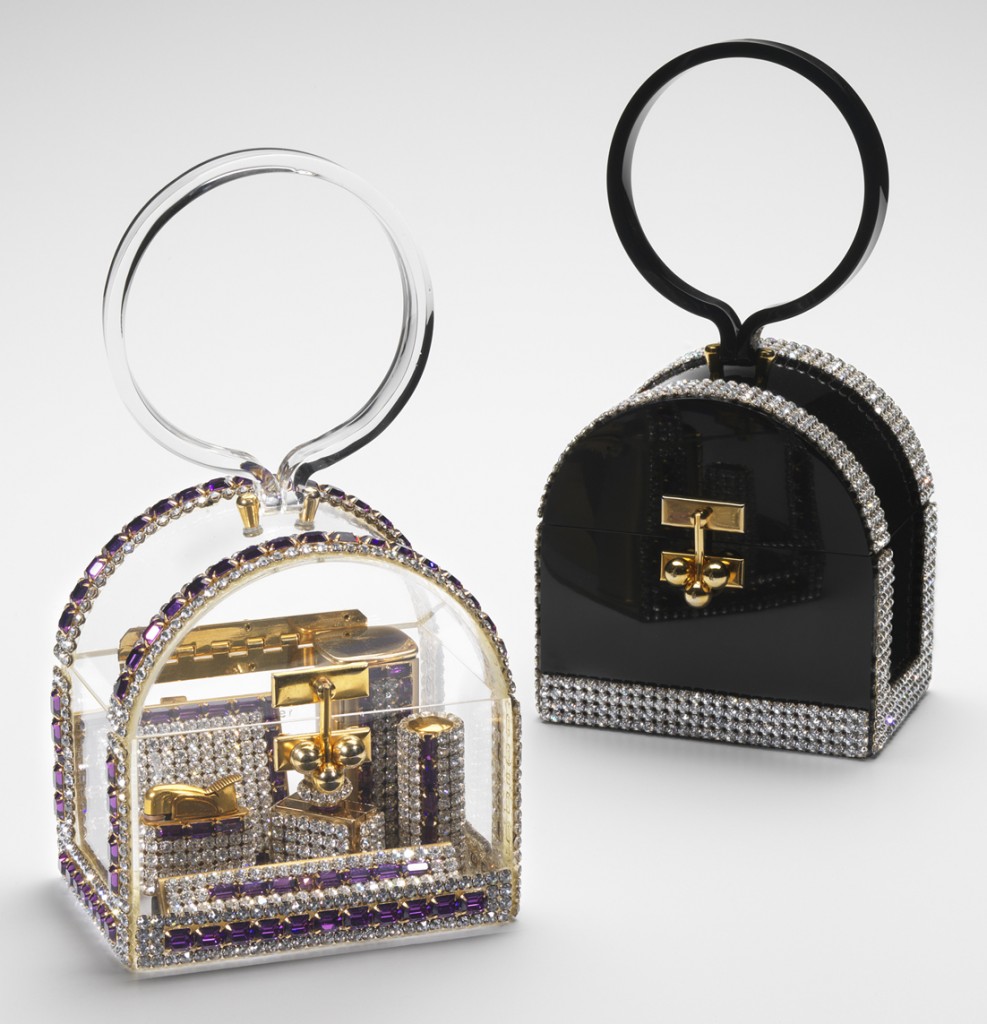 Wiesner made rhinestone-trimmed “birdcage” bags in black and clear. The clear one reveals the matching accessories within.

Some bags featured rounded see-through coffin-like lids with faux flowers inside. Other lids styles were designed to hold compacts, cigarette cases, and lipstick holders. And the shapes! There were triangles, parallelograms, hat boxes, convertible clutches, and accordions, in double- and triple-decker models, a specialty of Wilardy. Many of the Florida manufacturers secured their bags with a three-ball clasp, whose components were plated with 24k gold. By any measure, these were some pretty fancy handbags.

“Some of them were meant for special occasions,” says Berkson, “but others were designed as day bags. I have several go-to bags that I wear all the time during the day. For example, I have one Wilardy bag in four or five different colors. It’s a nice shape, easy to carry, with a mirror in the lid, and it’s large enough to hold my wallet, makeup, keys, cell phone, sunglasses, and all my other essentials. Most of them have rhinestones around the base of the handle and on the clasp, but I still consider it a day bag.” 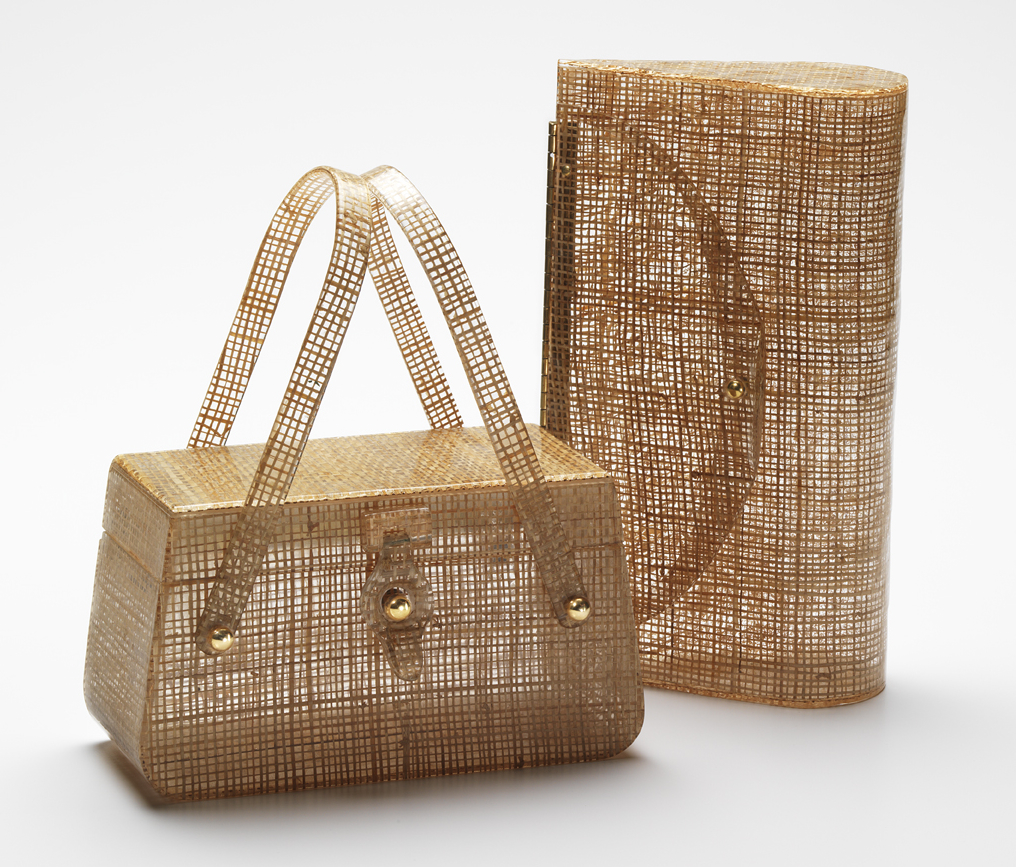 Basket-weave fabric was a favorite Lucite laminate. The bag on the left is by Charles Foster, the clutch on the right is from Wilardy.

From a fashion perspective, Berkson likes the effect a Lucite bag can have on the rest of one’s outfit. “When you go to a restaurant, it doesn’t matter what you’re wearing. If you’re carrying one of these bags, it’s what people are going to notice. That’s the beauty of them. You walk into a room and you know people are looking at you, and you can’t help but smile.”

And what about the clear bags? Weren’t women squeamish about walking around with a purse that revealed its contents? “Women would put a scarf inside their clear bags, and then put their stuff inside the scarf,” she says. “They’d change their scarf to match their outfit. And because the handbags were made by hand (and were expensive), a woman theoretically only needed one handbag, not that any woman today would admit to only needing one handbag,” says Berkson. “In the 1950s, that was a big selling point, and explains why the clear bags were popular. Other clear bags, like some made by Wiesner, could be purchased with matching accessories.” 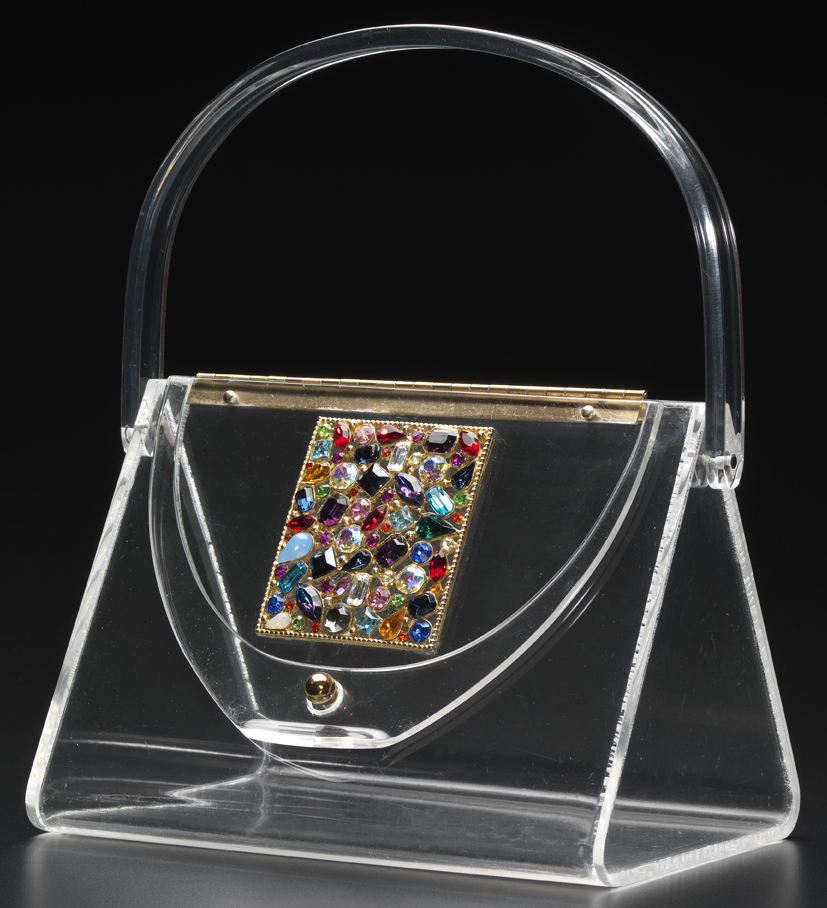 In the 1950s, women would change the appearance of their clear Lucite purses by simply changing the scarf they tossed in the bag to hide its contents from view.

By 1960, handbag manufacturers had discovered another type of plastic, vinyl, which was easier and less expensive to work with. Almost overnight, the fad of Lucite handbags appeared to be just that, and these hard-sided handbags languished in thrift stores and vintage shops, until Robert Gottlieb almost “single-handedly resurrected the Lucite handbag as a fashion icon.”

For Berkson, Lucite bags of the 1950s remain endlessly enticing, and the fact that they are eye-catching doesn’t hurt their appeal. “I love rhinestones,” she confesses, “I’m a glitter girl. Anything that sparkles makes me happy.” 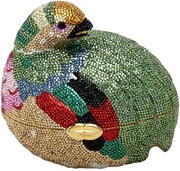