One of the hottest shows on TV right now is AMC’s Mad Men, which revolves around the exploits of Don Draper (John Hamm), the hard-charging creative director of a prototypical Madison Avenue ad agency, Sterling Cooper, circa early 1960s. The show has won numerous Golden Globe awards, a prestigious Peabody, and has received mountains of serious critical acclaim for the way in which it captures the Kennedy Camelot era for what it really was—the end of the 1950s. That’s all well and good, but it turns out that a lot of people are watching the prime-time drama just to look at the clothes. 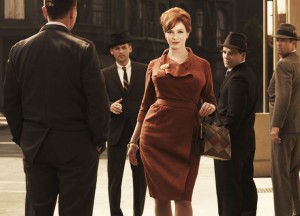 Spend five minutes with the show, and anyone with even the most minimal shred of fashion sense (I barely qualify…) will immediately notice the parade of men’s hats, coats, and slacks on display. Though the series is ostensibly guy-oriented, the female characters also get a chance to strut their stuff, in particular, and as you’d expect, in vintage 1960s dresses worthy of Audrey Hepburn. All that chiffon and form-fitting office wear! And don’t get me started on the cashmere sweaters.

In most dramas, even very good ones, clothing and props are selected to ensure that the actors appear accurate to their period. In Mad Men, desks feature vintage IBM Selectric typewriters and Western Electric Model 500 telephones. As for the costumes, they often help tell us a little something extra about the characters and the world they live in. For example, Draper never changes his look, even as everyone around him seems to be doing the opposite. Then there’s agency copywriter Peggy Olson (Elisabeth Moss), whose rising hemlines reflect the social revolution that is about to take hold of America and shake it by its starched lapels.

The producers seem to get this aspect of the show’s appeal. Visit the Mad Men site and you’ll find a blog devoted entirely to the show’s fashions. AMC has even provided fans with an app that lets you create your own Mad Men-esque avatar for Facebook, Twitter, or the iPhone, although the app’s cartoon choices seem irredeemably lame compared to the loving care taken by the show’s costume designers.