Flashback: Marbles Among the Earliest Games

This article discusses the history of marbles, including their introduction in England and the United States, and notes their popularity in a variety of games and the materials they were made from. It originally appeared in the July 1943 issue of American Collector magazine, a publication which ran from 1933-1948 and served antique collectors and dealers.

If we attempt to trace marbles back to the time in history when first they were devised and employed by people for amusement and games we shall be astonished at their great antiquity. Two thousand years ago they were recorded in the literature of the Greeks and Romans and they have been found in excavations dating back at least fifty centuries. Like other devices made and used by man at this early period, these marbles were made of stone and bore the crudeness of workmanship found in other creations of that primitive age. 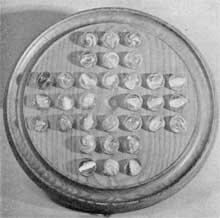 Jumpboard Marble Game: This was popular in the United States sixty to eighty years ago.

They seem to have been popular at the time of Emperor Augustus in the century before the beginning of the Christian era and there are frequent allusions in the records of the Romans to the use of marbles in games of sport.

It may have been by these people that the knowledge of marbles was spread across the European continent and into England for after the final conquest of Britain by the Romans in the latter part of the first century A.D., it is recorded that marbles made from stone were used by children as well as grown people in their play and games. We are led to conclude that in England they received an early appreciation and as their use increased they were better made and formed from real marble as well as stone and also from dried or baked clay.

Later on pottery, alabaster, and agate were employed in their making. Glass marbles, so far as records show, had their origin with the old glass makers of Venice. These were called “monstrosities” by the English who looked upon them as trifling playthings and not serviceable in their games.

During the 17th and 18th Centuries the making of these glass marbles became an industry of the Germans who by the skillful use of bright colors and ornamental figures made them attractive as toys. Their production centered in and about the quaint old city of Nuremberg which for many years held full prestige over any other in the world in the production of these winning little playthings. Many of the best stone and alabaster marbles were likewise produced in Germany; the province of Saxony for the most part supplying them. 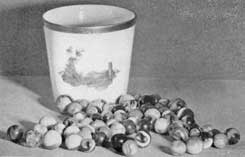 Various American-Made Marbles: The playing marbles in this group were made about thirty years ago and are among the first made here.

As time went on the games of marbles in England towered to such a height in popularity that for a long period they overshadowed other sports. They furnished amusement for children, competitive rivalry in sports among the students of the universities, and were a pastime of almost universal choice with the elders.

In the earlier period much of the playing was done with but two sorts of marbles; the ally-tors, made from real marble, and commoneys, made from clay or a plaster composition. The ally-tors were considered more valuable than the commoneys and one of the former might be exchanged for one-half dozen of the latter.

It is presumed that the ally-tor marbles got their name from the word tor which is Celtic for rock or stone. Taw was the name given to an ally-tor marble used for shooting the others in the game of ring taw. 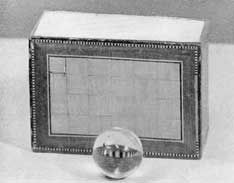 Quartz Crystal Marble and Trick Box: Each box was complete with two of these marbles. Box and marbles were widely sold in better toy stores of the United States about sixty years ago.

A white alley was an ally-tor made of white marble. A taw with a reputation of being lucky in its winnings was much coveted. Commoneys were unglazed while polleys were the same as commoneys but glazed.

Alleys were made from actual stone or marble chips obtained from the quarries; stonies were made from pebbles or a hard composition like stone and painted in some solid color. Blood alleys were of marble and so named because of the red spots in the material from which they were made. They were considered especially lucky. Later ally-tors were made of alabaster. Bounces were large marbles, made of stone. Their size and weight prevented their adaptation, to any great extent, in the games of marbles.

Marbles of crockery were called crookeys. They were slightly glazed and usually colored brown or yellow, one color being on one side and the other color on the opposite side. Some were made of red brick-clay and for the most part unpainted. They were called clayes.

Three Marbles of Early American Make: At the left, one of opaque black glass with surface decoration. In the center a mottled pottery marble in colorings like the Bennington ware which copied that made at the Rockingham pottery. At the right an excellent example of a clear glass marble with silver-like sulphide center in the shape of a water fowl.

Marbles made of white marble were sometimes called marble marbles. China alleys were made of china ware with white glaze and rings of different colors painted on them and were called chineys. Marbles made from chips of stone, marble, alabaster, quartz  and carnelian were often called shooters.

The carnelians were a valued possession as also were the flints and moon agates, made from quartz and agate. The term ringer was sometimes used to mean the same as commoneys.

An early game in England was that of Bowls. This was played with balls weighted on one side which was for the purpose of hobbling their speed or changing their course of direction. Marbles were at times used as substitutes for these balls and finally superceded them.

Antique Swirled Glass Marbles: With these the bases were flattened so that they became miniature paperweights.

Another game played with marbles in England known as Boss or Boss and Span or Boss Out consisted of bowling a marble to some distance and then this marble was used as a mark at which the opposing player could bowl his marble with the attempt to hit the first or to bring his near enough to span the space between the two with another one and so touch both of them.  If he succeeded he won the game, but if he failed his marble became a mark for the first player to attempt to win in the same way, this alternating turn from one to the other going on until the game ended. Something after the order of billiards was the English game of Span Counter and marbles were often substituted, especially where counters were lacking.

Most of the marbles used in this country were imported from Central Europe until World War I so disrupted their production that adequate importations were no longer available. American manufacturers soon recognized their opportunity and began to produce marbles extensively. In fact, thirty years or so prior to this time, both clay and glass marbles had been made in Ohio, though in no great numbers. The first of which we have any authentic record were of clay and made by Samuel C. Dyke in South Akron, Ohio, in 1884. His business later developed into an output of about thirty thousand a day.

A Group of Antique Glass Marbles: Some have swirled centers. All are presumably of European make and are average quality.

The manufacture of glass marbles was not started until a little later, the first of them being made in 1896 by the Navarre Glass Marbles Company of Navarre, Ohio, operated by Emil Converse. It is unlikely that glass marbles were made before this date by any of our older glass factories. Although it has been said that some of the early marbles made in Ohio were of the type imported from Germany, such as those with the swirling lines of colors and the white encrusted figures, both in clear glass, there is no authoritative confirmation of this fact from the majority of those who were connected with or descended from operators of the Ohio glass factories.