Mr. Chemex: The Eccentric Inventor Who Reimagined the Perfect Cup of Coffee 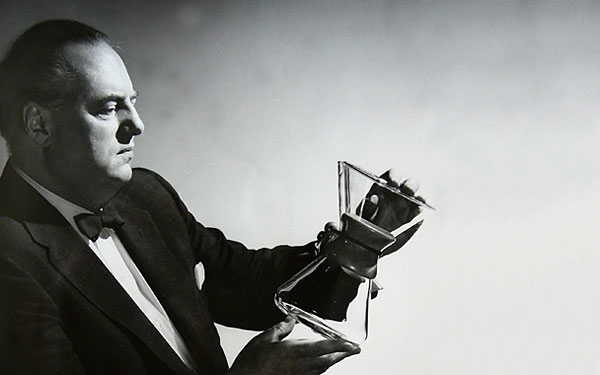 As part of our modern obsession with artisan-everything, today’s pickiest coffee drinkers insist upon a hand-brewed cup made right before their eyes. At the cornerstone of this trend is the undisputed king of pour-over coffee, the Chemex Coffeemaker, which graces the counters of hip homes and cafes around the globe. But this ingenious device is nothing new: In fact, the Chemex company has been making the exact same brewer for more than 70 years, proving the staying power of great design.

The man behind Chemex’s functional-chic was Dr. Peter Schlumbohm, a scientist with a larger-than-life personality and a strong perfectionist streak. During his lifetime, Schlumbohm patented more than 300 different devices; at least 20 of these “Beautilities,” as Schlumbohm called them, eventually made it into the New York Museum of Modern Art’s permanent collection—everything from an electric fan to a cocktail shaker.

Schlumbohm developed his products by stripping appliances down to their essentials and making them work better. In the vein of modern inventors like James Dyson, Schlumbohm didn’t overload his creations with a jumble of new features—he reshaped the industries he entered through the sheer force of innovative elegance. Maybe that’s why the Chemex still feels so fresh; in a world of overly complex and smirking technology, the Chemex remains a quiet anomaly. 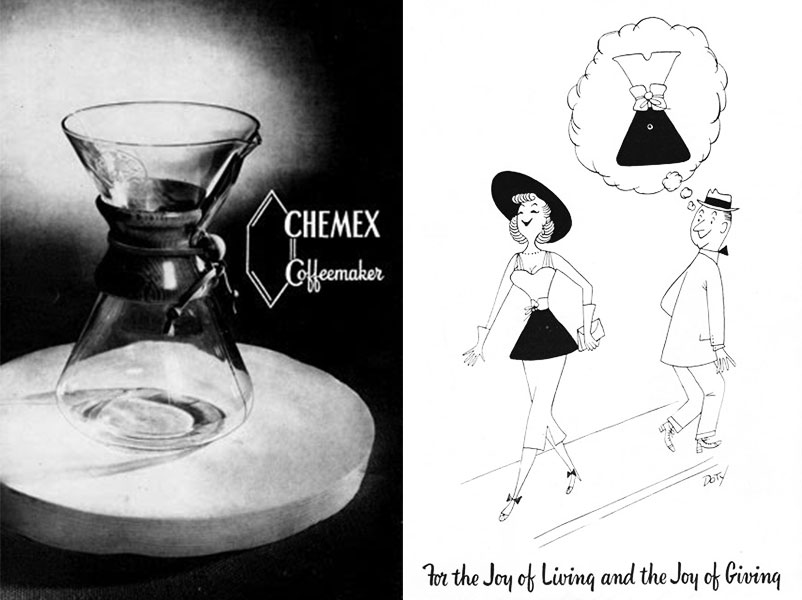 Top: Dr. Peter Schlumbohm inspecting his most famous creation. Above: Two early ads for the Chemex coffeemaker, circa 1950s.

A German immigrant to the United States, Schlumbohm received his Ph.D. in Chemistry from the University of Berlin and moved to New York in 1936 (just as Hitler was consolidating his power). Despite his friends’ protests about the dire state of the American economy during the Great Depression, only five years later, Schlumbohm had invented his famous hourglass-shaped brewer; within a few years of securing his patent, the Chemex was available in department stores and through mail order catalogs around the world.

Schlumbohm not only wanted to create a device to brew perfect coffee without a trace of bitterness, but also an elegant product that fit the streamlined aesthetic of Mid-Century Modernism. At the time, a few other companies were already manufacturing simple coffeemakers for home use, most notably the German brand Melitta.

In 1908, Melitta Bentz had been the first to develop a new solution for filtering coffee, using a sheet of blotting paper from her son’s schoolbook. By the 1930s, the Melitta company had created its familiar funnel-shaped porcelain brewer, whose pour-over brewing process became known as the “cone method.” Though devices like Melitta’s worked perfectly well, they just weren’t sexy, lacking the sleek, modern curves of Schlumbohm’s Chemex. 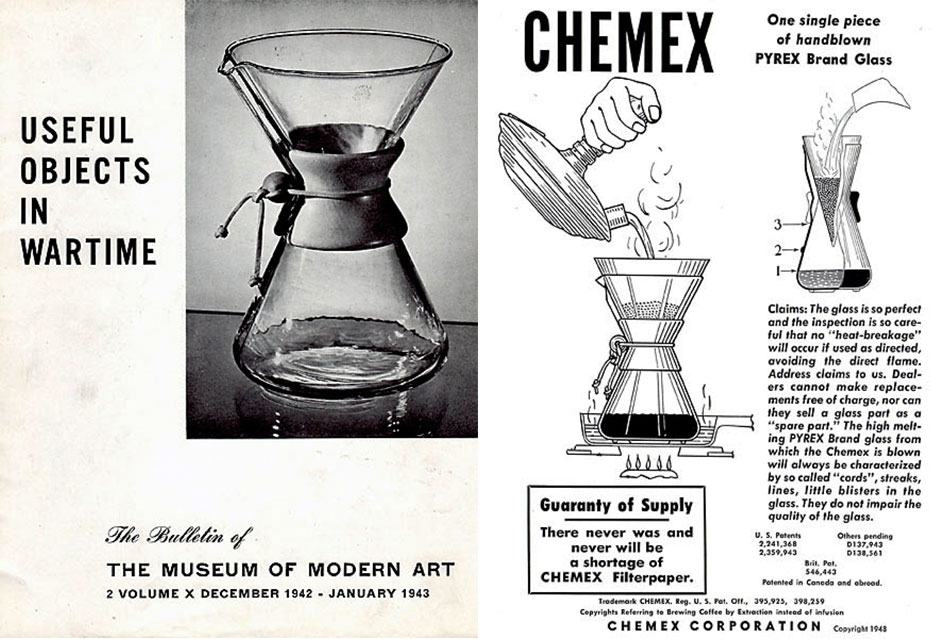 Left, the MoMA brochure “Useful Objects in Wartime,” and right, an ad explaining the Chemex preparation process, both from 1943.

The Chemex is essentially a glass beaker designed to make coffee using a paper filter, coffee grounds, and water. A circular filter is folded into the top half of the glass decanter, filled with grounds, and hot water is poured over the top. A slender, indented spout allows steam to escape while brewing, or coffee to be poured once the filter and grounds have been discarded. The carafe’s midsection is surrounded by a shapely wood corset tied with a leather bow, which protects the hand from heat.

From circle to cone: How to fold the Chemex filter.

“It’s one of the simplest ways of preparing a pot of coffee,” says Shark Senesac, the lead coffee roaster for De La Paz Coffee in San Francisco. “I think most people have this disconnect with how things are made in general, be it food or furniture or anything. But when you see someone make a cup of coffee with a Chemex, you think to yourself, ‘Wow, that’s all there is to the process?’”

A 1949 article in LIFE magazine called the Chemex “a typical bit of Schlumbohmiana since it is handsome (the Museum of Modern Art displayed it as one of the best-designed products in 1943), it makes excellent coffee, and consists essentially of chemical laboratory equipment—a chemist’s flask, a glass filter, and a piece of filter paper.” Despite its designer appeal and numerous accolades, the Chemex was relatively cheap: In the 1950s, the company’s 1-quart coffeemaker ran just $6, and today they generally fall in the $30-$40 range.

Though the Chemex was his most successful invention by far, Schlumbohm tinkered with other ordinary objects long after the coffeemaker’s success. Some of Schlumbohm’s cleverest contraptions included the Instant Ice container, which chilled liquids quickly using brine; the Cinderella, a conical trash pail with disposable wax-paper linings; and the Minnehaha, a device that mixed and aerated drinks by forcing liquid through hundreds of tiny perforations. Schlumbohm also patented a stylish hot-water kettle made entirely of glass, a disposable aluminum frying pan, and a cigarette holder tipped with a miniature Chemex-shaped fitting that held a tiny filter, years before the tobacco industry adopted them.

Perhaps his most daring design was for the Chemobile, a squat family car featuring a cylindrical cab with panoramic windows, which offered passengers a vantage point Schlumbohm described as “like a maharajah riding in a basket on top of an elephant.” Through his sketches for the Chemobile project, Schlumbohm made it clear that he wasn’t irked by the mechanics of modern automobiles, only their form.

In a company newsletter from 1956, Schlumbohm attacked the American auto industry for selling clunky machines that didn’t function well for city dwellers: “Detroit just spent millions for lower and longer 1957 Dachshunds. Never mind. A whispered truth remains a truth. A shouted lie remains a lie.” Unfortunately, despite his passion, the radically different Chemobile succumbed to the mid-century automotive ethos of “bigger is better,” and never made it to production. 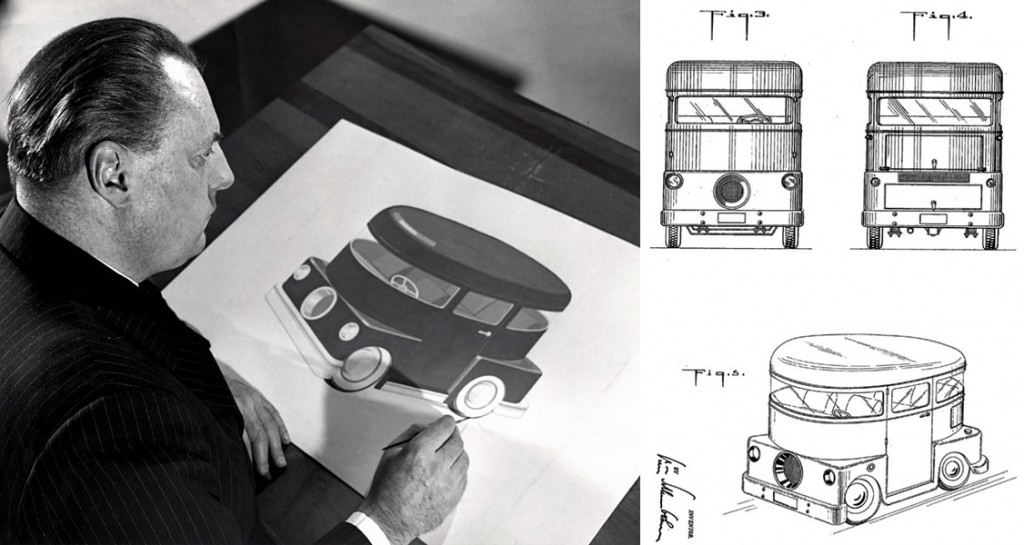 Left, Schlumbohm at the drawing board with a rendering of the Chemobile, and right, a section of the vehicle’s patent sketch.

In many ways, Schlumbohm’s little company embodied the professed ideals of today’s tech startups, as he worked to develop new products that simplified our harried lives, undercutting more established, slow-moving businesses. As Schlumbohm wrote in a company newsletter in 1956, young people should “ignore the lure of a big company’s payroll with its nerve-killing conformism, to go out on their own, to be their own boss, to apply their knowledge to creating Beautilities instead of gorilla-guided missiles.”

“He was very creative, and did all of his own marketing and writing,” says Grassy. “We have the original filing cabinets from Chemex, and they’re just filled with all of these different cartoons and newsletters and advertisements, all sorts of things that he wrote throughout the years. He even patented words to describe his inventions.” 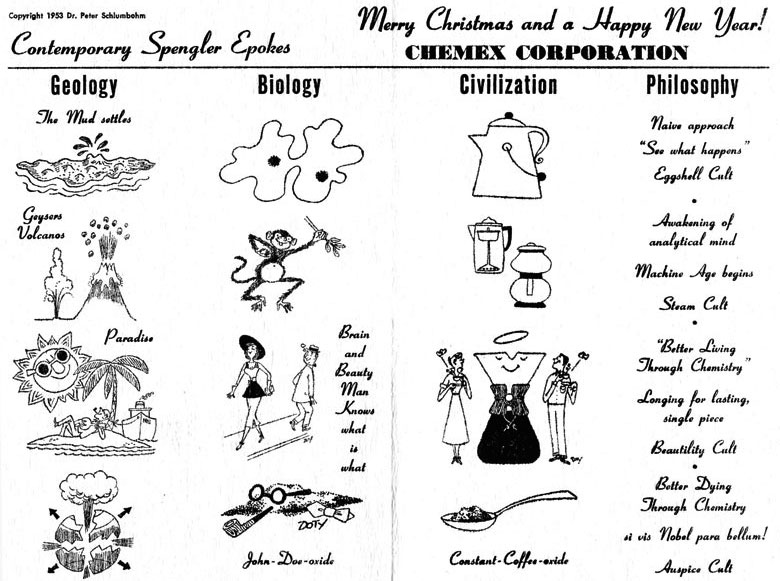 Evolutionary history, as seen on the Chemex company Christmas card from 1953, with illustrations by Roy Doty.

In the LIFE magazine piece from 1949, Herbert Brean detailed Schlumbohm’s formula for a successful new product: 20% was recognizing a problem that needed solving, 40% was coming up with a patentable solution, 30% was good design, and 10% was merchandising. Brean wrote of Schlumbohm, “He is the kind who perceives a problem and logically sets about finding a solution that will be efficient, handsome and profitable. Dr. Schlumbohm does all his own selling, writes his own advertisements, direction leaflets and brochures and even types his own patent applications—one draft only, since he refuses to make a mistake.”

Brean also highlighted Schlumbohm’s unconventional schedule, which the inventor insisted helped to fuel his creativity. On a typical weekday, Schlumbohm woke up late, worked on a few new ideas in the kitchen of his stylish penthouse, dropped by the small Chemex factory during the late afternoon (to check on his mail and eight female employees), and ended the evening hopping from restaurant to bar to restaurant again, where many of his best ideas originated. Schlumbohm liked to live large, cruising around Manhattan in a personalized Cadillac featuring a golden hood ornament shaped like a Chemex. 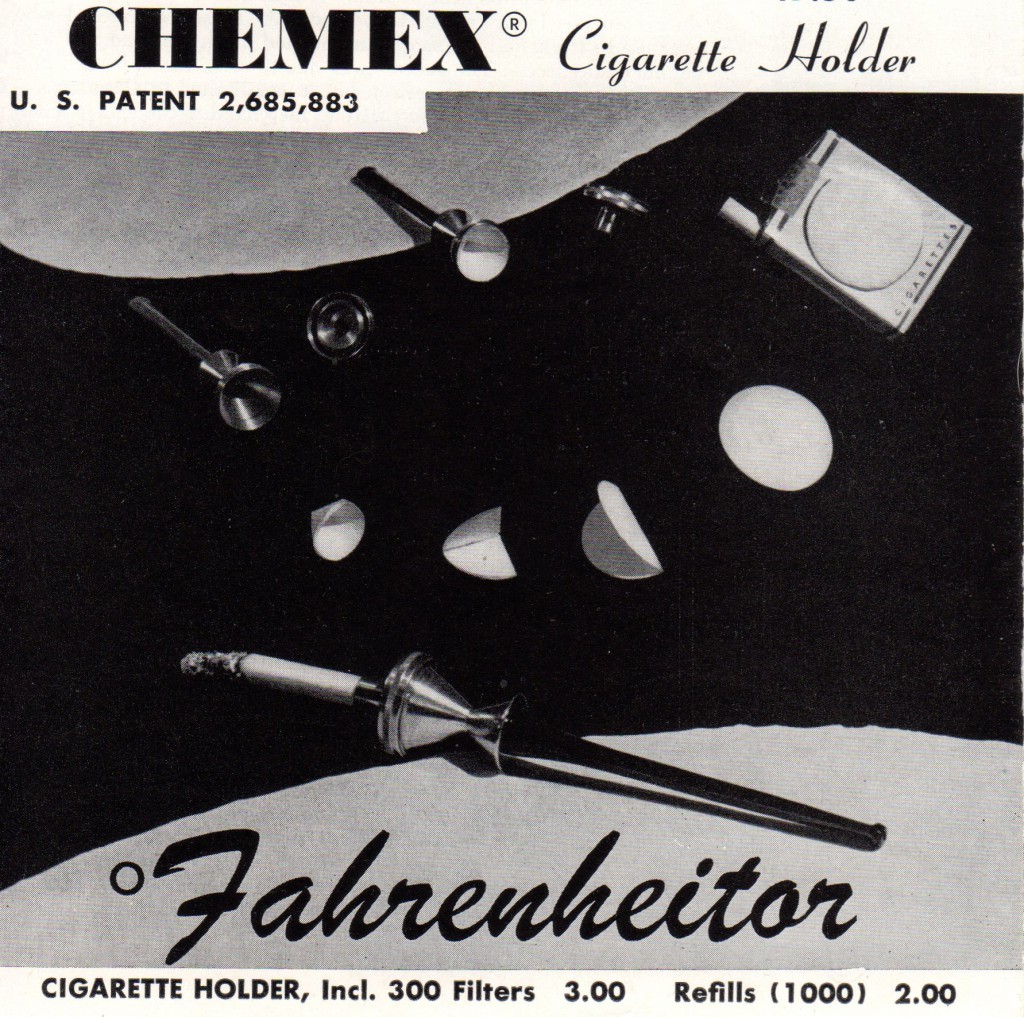 After Schlumbohm’s death in 1962, his company had trouble maintaining its relevance, despite the integrity of its products. Senesac explains that the Chemex had mostly faded into obscurity during the consumer-appliance boom of the 1950s and ’60s, as people with means preferred an electric device that both boiled water and brewed their coffee for them. “In the ’60s, when microwaves and all these other electric home appliances came out, everyone wanted coffeemakers that automated the process so you didn’t have to make it yourself anymore,” explains Senesac. “Everyone wanted a machine.”

Chemex vice-president Eliza Grassy says that for much of the last 50 years, the Chemex customer base has remained a small cult-following of dedicated coffee hounds. Grassy’s family purchased the company in 1980, but only recently did they begin to notice the uptick in demand for their coffeemakers. “Within probably the past five years, the numbers have picked up considerably,” she says. “We’re selling many more coffeemakers than we ever had domestically and also internationally.” 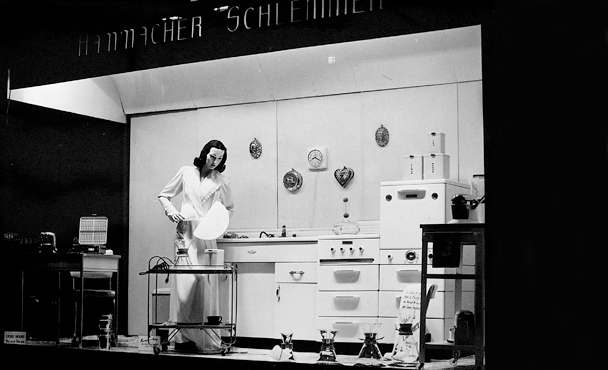 This 1950s window display at Hammacher Schlemmer in New York shows a variety of Chemex innovations.

The Chemex comeback occurred just as mainstream coffee drinkers were growing accustomed to the unique flavor profiles of different coffees and preparation methods, thanks to giants like Starbucks. Many began to realize that familiar brewing processes cause specific problems: Methods like the French press use metal filters, which allow insolubles to leak into the coffee, while other devices underheat the water or percolate the coffee for too long.

Senesac first saw a Chemex at a friend’s house about a decade ago, and something instantly clicked. In contrast to the mysterious black-box method of most coffee machines, the simplicity and transparency of the hand-powered Chemex came as a total relief. “I hadn’t ever seen that method of brewing coffee before,” he says. “It was so easy, it made so much sense.”

Of Schlumbohm’s many inventions, only the Chemex coffeemaker and its accessories are still made today, and this analog relic with an expanding market share is an aberration in our increasingly digitized world. Grassy says that Chemex sales have increased to the point that the company has decided to release two new products in October based on vintage Chemex designs. “We hope to continue this throughout the years, not inventing new patents, but bringing back some of his old ones,” she adds. 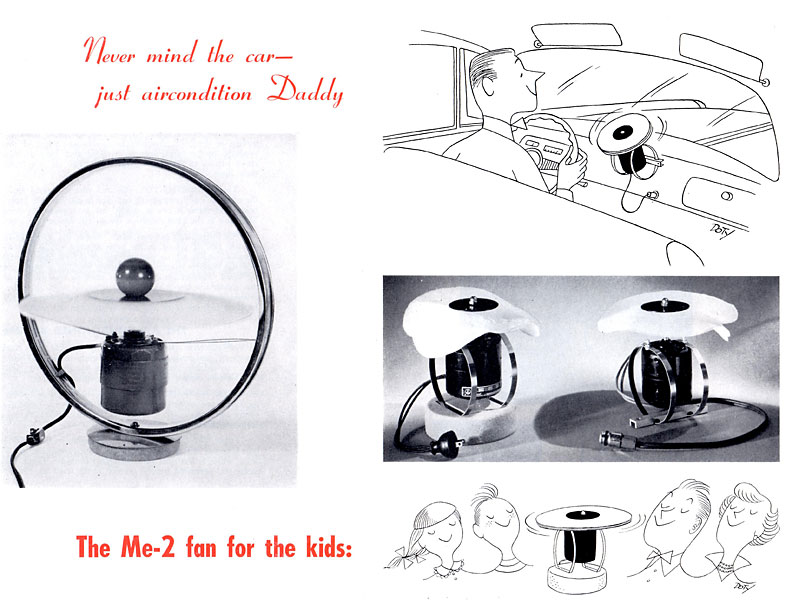 An advertisement for a travel version of Schlumbohm’s bladeless Filterjet fan.

With the revival of the Chemex method, a few companies making large-batch brewers have refined their machinery to produce coffee almost identical to a pour-over brewer. Modern machines like FETCO’s now give baristas the power to customize a batch of coffee, letting them quickly brew a gallon that’s as good as a single pour-over cup.

Even so, these machines cost 10 to 20 times as much as a Chemex, and can only brew one kind of coffee at a time. Plus, they don’t have the Chemex cachet, this artisanal aura that comes from unveiling the magical brewing process. “People want to be hands-on whenever they can,” says Senesac. “It brings them closer to the things they’re consuming.

“I always thought of the Chemex as a similar phenomenon to the Eameses and their famous chairs,” he continues. “They remade something that everybody already had, but they made it accessible and beautiful and everyone wanted one. All you do is sit on them, but everyone wants to look at them, too. The Chemex is in the permanent collection of the MoMA for a reason.” 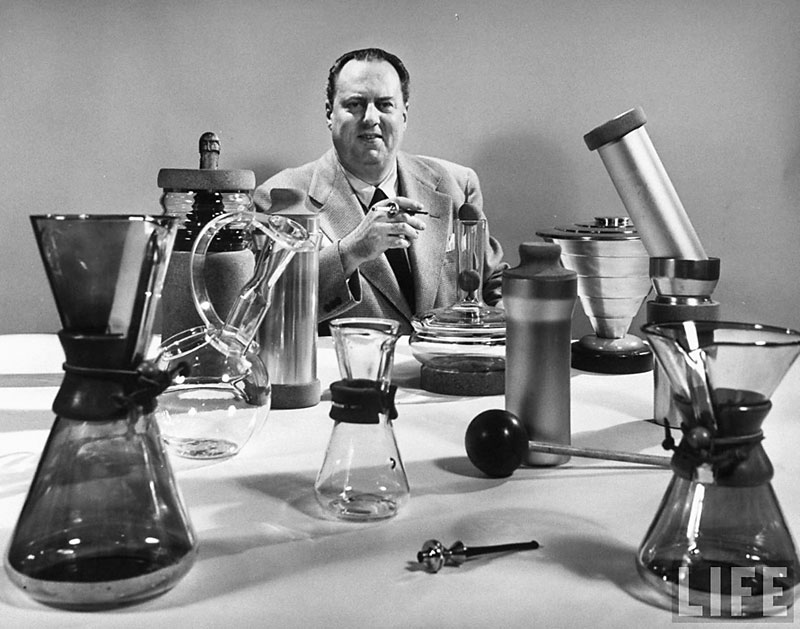 Schlumbohm and a few of his inventions, as shown in LIFE magazine. 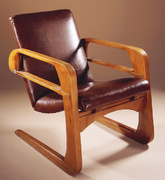 Making, and Eating, the 1950s' Most Nauseating Jell-O Soaked RecipesCooking With Glass: How Pyrex Transformed Every Kitchen Into a Home-Ec Lab

Coffee CollectiblesThere’s nothing like a good cup of coffee, except, perhaps, a good coffee c…