Mystery Solved: Grandpa’s Wooden Canteen from the War of 1812

Antiques should be appreciated and treasured, not only for their beauty and uniqueness, but also for their history. Over the years, I have inherited many family heirlooms. One day, I decided to start documenting their history for the sake of posterity and my children. I’ve often thought if an heirloom could talk, what a story it could tell. Thus, my five-year search to learn the story of this old wooden canteen. 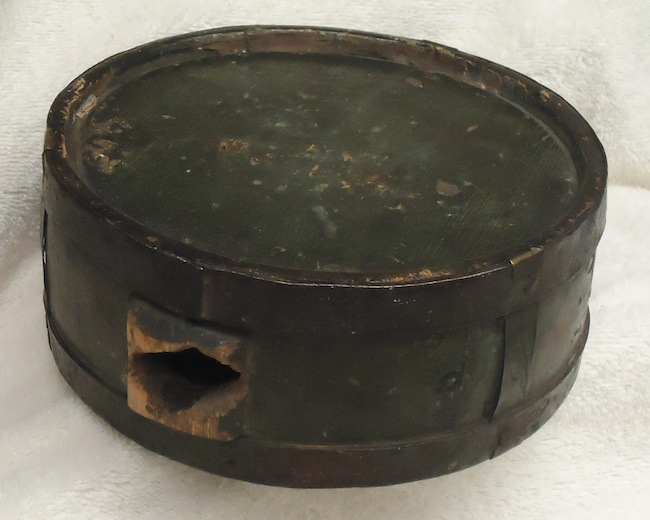 I knew this much: My grandfather got it from his father. Everyone in the family had always said that it was used in the War of 1812, but no one seemed to know who actually carried it. My mission was to find this mystery man, if he even existed.

Hoping to learn something about the canteen, I started out by sending photos of it to experts I found on the Internet. One fellow told me to keep it in the family and never sell it. Another told me that canteens were often passed down in families and used in different wars. I learned all about Civil War canteens from a third. 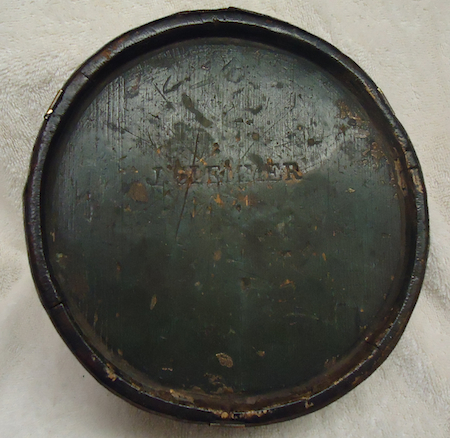 J. Slemmer, whose name is stamped into the side of this early-19th-century canteen, was a cooper who also made canteens for the military.

This was all interesting stuff, but nothing led me any closer to solving the mystery, and for a while I dropped the quest. Several years went by until my curiosity resurfaced. I began again by researching the engraved name, J SLEMMER, on the canteen. All I came up with was a Civil War general by the name of Adam J. Slemmer. I corresponded with a descendant of the general named Bill, but he and I soon hit a brick wall. Bill suggested I join Ancestry.com. I took his advice and researched my grandfather’s surname—nothing.

Now I was really obsessed with finding this mystery man. Perhaps the canteen was a fake. My husband kept joking that maybe Grandpa found it in an old barn like the guys on “American Pickers.” I thought about traveling to the nearest “Antiques Roadshow” for authentication. Then I discovered Collectors Weekly. I was about to post it as an Unsolved Mystery on Show & Tell when I happened to enter one more name in my family tree on Ancestry.com. Another leaf appeared.

Since joining Ancestry.com, I had read dozens, maybe even hundreds, of these hints, but this one was different. It was a War of 1812 Service Record. Imagine my excitement! It appears that my third great-grandfather Ichabod Sheldon was mustered into the New York Militia between 1812 and 1815. Census records showed that he lived in southern Indiana near my grandfather’s father when he was a child. I’m assuming Ichabod gave the canteen to his grandson, Cassius, who then gave it to my grandfather. It’s also very possible that Cassius used it in the Civil War. Anyway, that’s the story that will be told to future generations. Regardless of its history, the canteen will always be cherished by me, and hopefully in another 200 years by one of my descendants.

Postscript
I recently purchased a book about army and militia canteens and learned that Jacob Slemmer was a Pennsylvania cooper who made military canteens from 1791 to 1821. So, J SLEMMER is not the soldier who I thought owned the canteen, but the cooper who made it! Slemmer’s canteens were regulation-style wood-drum canteens. Photos in the book authenticate my heirloom. 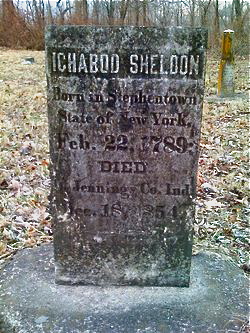 By the way, Jacob Slemmer is the grandfather, times eight, of Bill, the descendant of General Adam Slemmer mentioned earlier. Bill was thrilled to hear of my discovery—to him it was “the find of the century.” He knew that his ancestor was a cedar cooper, but no one in his family knew he made canteens for the military. He said he was not surprised since Jacob was a Revolutionary War veteran. Bill sent the results of my research to all of his family connections on Ancestry.com.

In addition, I have recently discovered that Ichabod Sheldon was buried in Old Scipio Cemetery in Jennings County, Indiana. A volunteer named Charlotte at Find a Grave sent me photos of his headstone. Charlotte said she had quite a hike through cornfields to find the old cemetery! Her photographs of Ichabod’s headstone helped me find closure to my story. Ichabod’s headstone puts a face (or at least a reality) on my ancestor, and, perhaps ironically, brings my mystery man to life.

Five-and-a-half years later, my mission is over. My heirloom has done quite a lot of talking over the past few months.