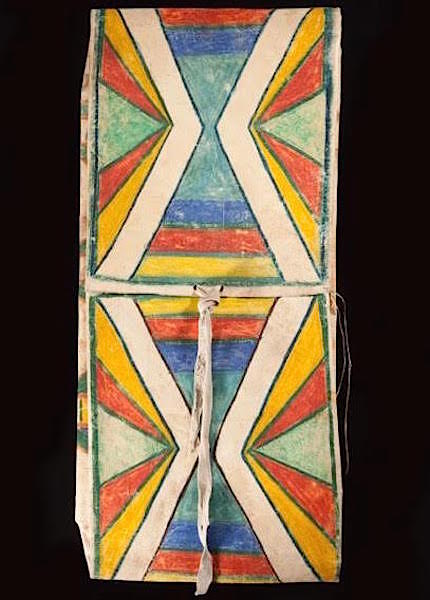 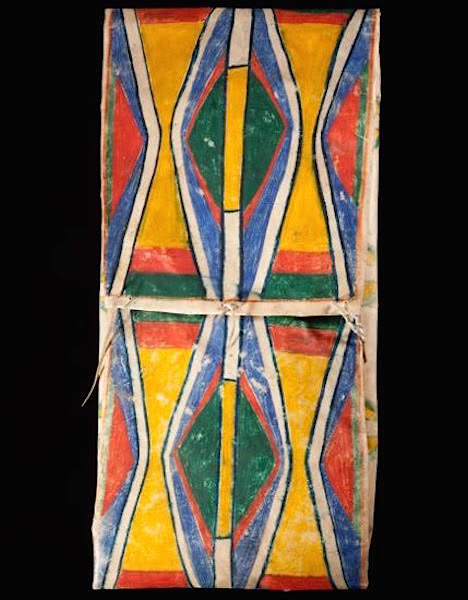 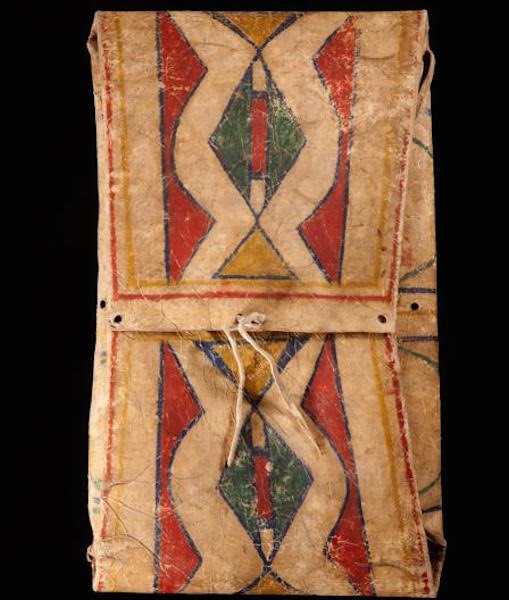 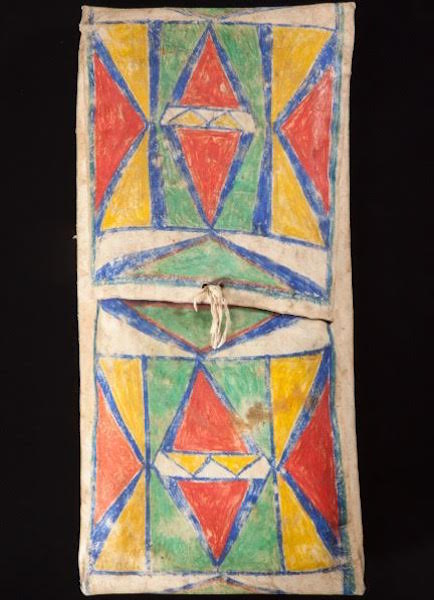 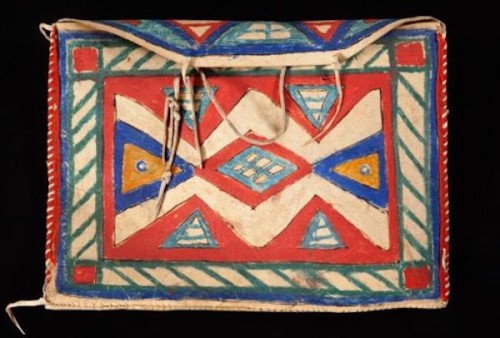 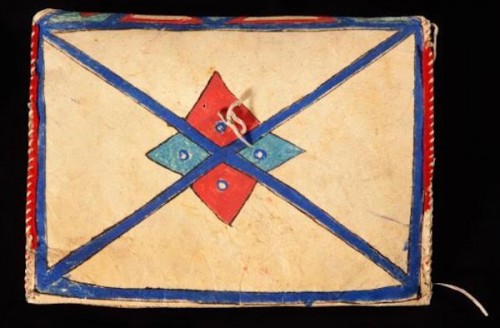 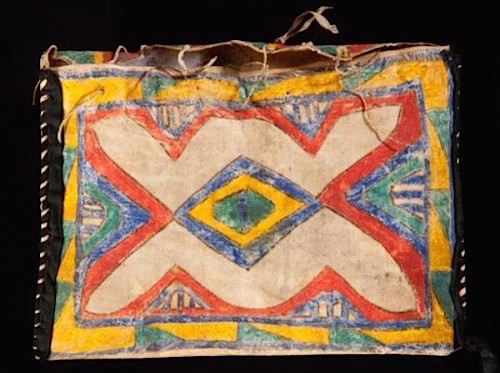 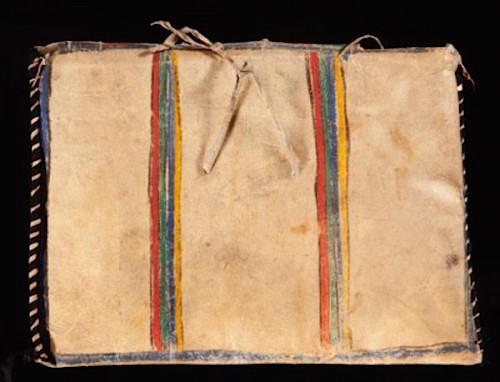 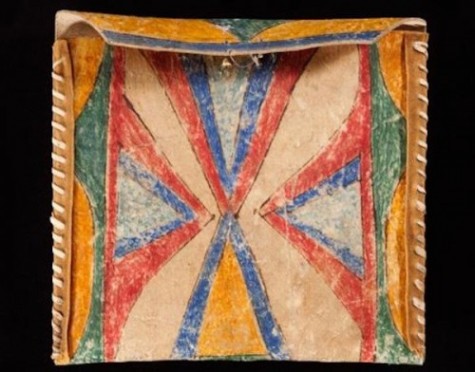 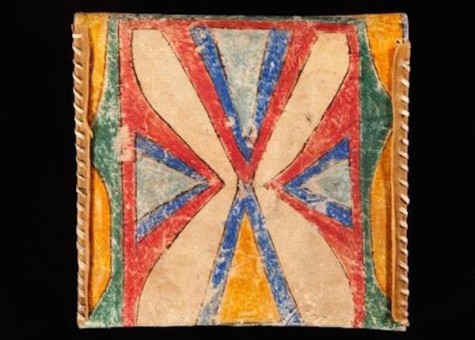 Europeans and European Americans didn’t fully embrace abstract art until the early 20th century, when artists like Piet Mondrian and Ilya Bolotowsky used color, lines, and geometric forms as their means of expression. However, shapes in bold hues have long been a part of the visual language for Native Americans, centuries before their invaders got obsessed with color blocks.

Similarly, before Louis Vuitton steamer trunks became all the rage, Plains and Plateau tribes—who became increasingly nomadic as settlers encroached on their native lands—had mastered the art of beautiful luggage, or rawhide saddlebags known as “parfleche.” In the early 19th century, geometric designs were just etched into the parfleche, but starting in the mid-1800s, they were painted in vivid primary and secondary colors.

Recently, John Molloy, owner of his namesake gallery in Manhattan, hosted an exhibition called “Geometries,” that showed 19th-century Native American parfleche next to 20th-century Abstractionist paintings, which sparked our interest in the beautiful saddlebags. Even though the two traditions originated independently, Molloy cites scientific studies that show the colors and shapes of each evoke comparable emotional responses in viewers’ brains. 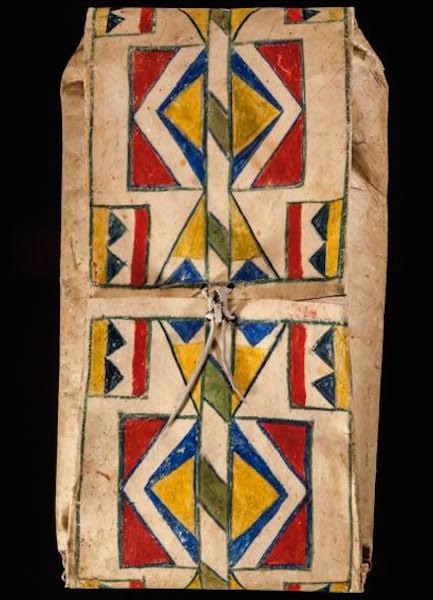 Molloy explains that the tribespeople used rawhide for their baggage because it was only semi-tanned and would hold its shape. The decorating—using natural mineral paints or commercially purchased paints—had to be done as part of the tanning process, when the hide was still wet, which is akin to the fresco painting technique.

“What’s wonderful about the Native American form is that within this geometry that is somewhat specific, they have a tremendous area of innovation and creativity.”

“We did an interview with somebody who is making these parfleche now,” Molloy says. “He says you’ve got to paint it in the shade because otherwise the rawhide will dry too quickly and won’t absorb the paint. When you paint it while the hide is still wet, the paint is absorbed into the hide, so that when you’re using the bag, the color doesn’t get knocked off. It has a different quality to it than something that’s just been painted on the surface.”

Traditionally painted by the women of the tribes, parfleche were made as utilitarian objects for the Native Americans themselves to carry things like clothes, tools, food, and medicine on horseback—and as souvenirs sold to European Americans touring the West. A typical “envelope” parfleche would be roughly 12 inches wide and 26-27 inches tall. Smaller forms, known as “document cases,” are about 12 inches wide and 10 inches tall. Different tribes used different patterns of diamonds, triangles, rectangles, squares, and circles so that a Sioux parfleche would be distinct from that of a Crow.

“Parfleche designs might be similar to flags, but they don’t have a rigid geometry,” Molloy says. “What’s wonderful about the Native American form is that within this geometry that is somewhat specific, they have a tremendous area of innovation and creativity. It reminds me of the sonnet, with its 14 lines of iambic pentameter—a rigid form that has borne tremendous creativity. I think that the American Indian parfleche has done a similar thing.” 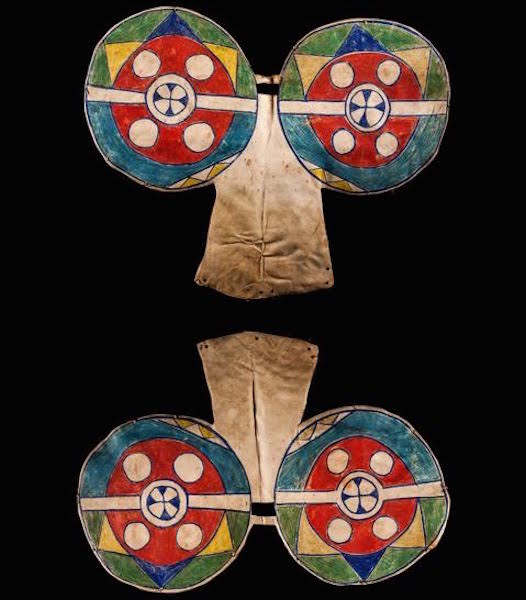 (To learn more about Native American parfleche, read about the John Molloy Gallery exhibition here and here, as well as Aline Brandauer’s essay “Art on Horseback: Parfleche.” Also, pick up Gaylord Torrence’s book “The American Indian Parfleche: A Tradition of Abstract Painting.” If you buy something through a link in this article, Collectors Weekly may get a share of the sale. Learn more.)

Why the 'Native' Fashion Trend Is Pissing Off Real Native Americans 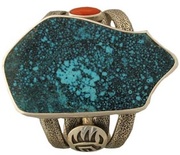 SuitcasesIn 18th-century Europe, leisure travel was only for the rich. Their servant…

Fine ArtFor as long as there have been civilizations, humans have made art to inter…