Let There Be Light: One Artist's Mission to Resurrect Old World Stained Glass 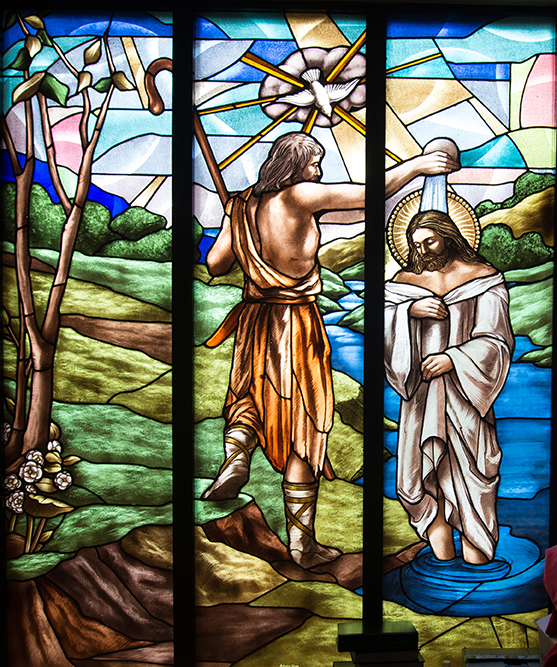 The glorious stained-glass windows that illuminate the historic Gothic cathedrals of Europe are monuments to illiteracy. To be sure, one purpose of the glass in landmark cathedrals like Canterbury and Chartres was to flood cold naves and transepts with rays of warming light. But the stained-glass windows produced during the Middle Ages were primarily designed to enlighten and educate the unlettered masses in the teachings of the Bible, via colorful depictions of Adam and Eve being banished from Eden and translucent portraits of Jesus bearing the cross on his fateful march to Calvary.

“When you work in stained glass, sometimes you work for the glory of God.”

For half a century, Josef Aigner (silent “a,” long “i”), founder of Artistic Glass in Toronto, Canada, has been practicing the stained-glass traditions of his Gothic forebears, although we may assume that most of the parishioners who sit beneath his breathtaking windows are able to read and write. It’s for them, indeed for anyone who loves stained glass, that a new book titled Artistic Glass: One Studio & Fifty Years of Stained Glass has arrived. Written by Aigner’s daughter, Cloe Joël Aigner, who’s currently earning a Master of Education at Simon Fraser University in Vancouver, B.C., the book sheds welcome light on Aigner’s unlikely journey from postwar Germany to Canada; explains the history and techniques of stained glass; and showcases the windows Aigner and his colleagues at Artistic Glass have produced since 1969 for more than 250 houses of worship, as well as countless private residences and public places.

The life of Christ, as told by St. Andrew on his journey from Israel to Rome. St. Andrew’s Roman Catholic Church, North York, Ontario. Click to enlarge.

Churches and stained glass have been outsize presences in Josef Aigner’s life since his birth in Gerzen, Germany, in 1945, a few weeks before VE Day. By the time he was 6 years old, Aigner’s family had moved to nearby Isen, and at the age of 8, Aigner was an altar boy at Isen’s ornate Catholic church, which was conveniently located across the street from his house.

“We got paid 10 cents per mass,” Aigner tells me over the phone. “I saved enough money to buy myself a pair of skates. Our church had beautiful Baroque windows,” he adds. “They’re still there.” Isen, it seems, was just far enough outside Munich to escape the carpet bombing that flattened half of that city, so other than a lack of heat in winter, Aigner’s memories of his postwar childhood are largely positive. “The American soldiers parked their big tanks right in front of our house,” he says, still sounding excited by the memory. “I loaded up on all the chewing gum they gave me. It was a good time.” 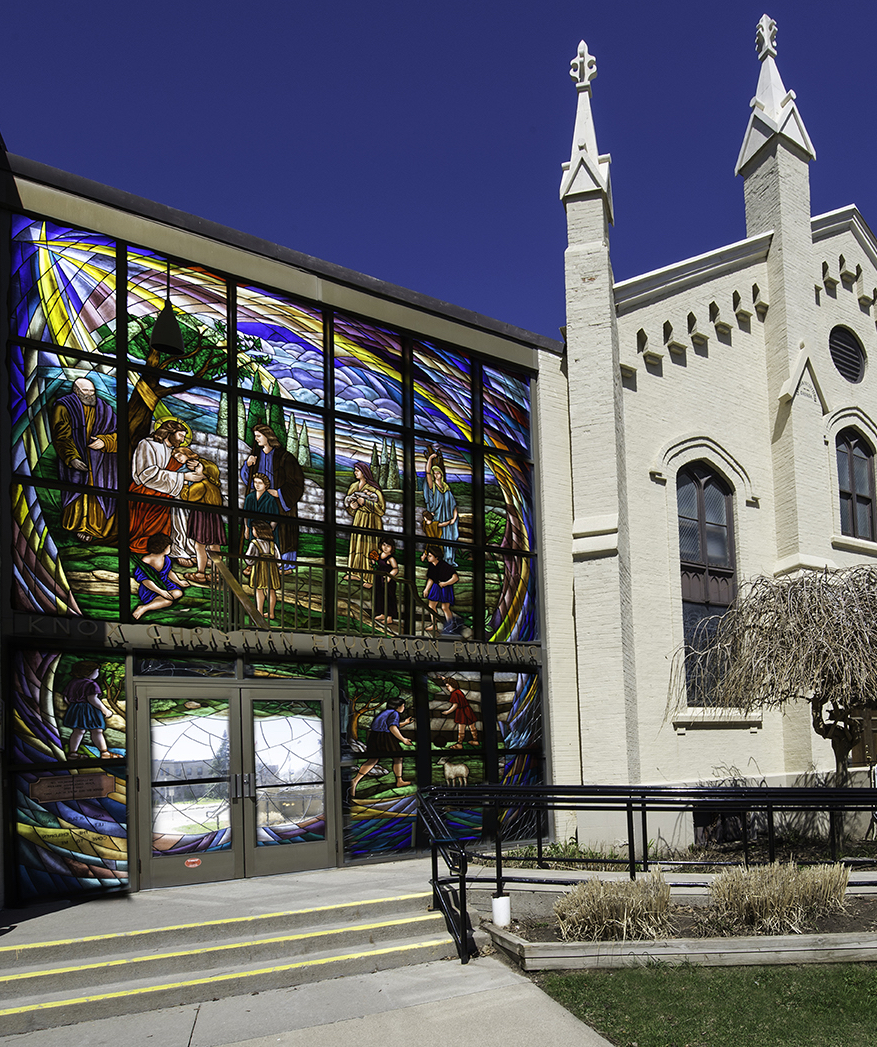 By the late 1950s, Josef was helping his father, also named Josef, around the family’s store. The Aigners sold home furnishings, and behind the store was a workshop where Aigner’s dad did glazing, which is the craft of installing and repairing windows and the frames that hold panes of glass securely in place. Aigner’s grandfather was also a glazier, and he was also named Josef, which means Aigner is the third of three generations of Aigners to make a living working with glass, and to answer to Josef. “We kept the name in the family,” Aigner says with a chuckle.

To be clear, this was not glazing in the Chartres or Canterbury cathedrals sense of the trade. “It was totally different,” Aigner confirms. “Don’t forget, we’d just come out of a terrible war, so my father was glazing new windows for new houses and new buildings. That’s what people needed. If we got a church repair, it was something special. I don’t remember my father doing any staining,” he adds, referring to the namesake technique of stained glass. “He may have occasionally worked with pieces of stained glass, but he didn’t do any of the painting.”

Even though Aigner’s experience as a glazier didn’t precisely prepare him for a career in stained glass, the work was at least related, which is why, at the age of 16, Aigner went to Munich to study art before deciding to apprentice to yet another Josef—last name Mascher—of the renowned Glaserei Mascher in nearby Ebersberg. After completing his apprenticeship in 1964, Aigner spent several years as a stained-glass artisan in Europe. Among his numerous prestigious projects, he worked in the Reims, France, studio where Marc Chagall’s stained-glass windows were produced, and despite his youth, Aigner was entrusted to make repairs to a window at Notre-Dame in Paris.

The creation of the universe (top section) and Adam and Eve’s expulsion from Eden (bottom). St. Patrick’s Parish, Markham, Ontario.

After four years of doing this sort of work throughout Europe, Aigner took a break in 1968 for a long-desired trip to the New World. The plan was to land in Toronto, travel the Americas from north to south, and then return home to take over his father’s store.

Aigner never made it past Toronto. Instead, he fell in love with the city and was soon working for a company called Toronto Glass Craftsman. By 1969, Aigner had founded Artistic Glass, and an early commission at his first trade show of stained-glass lamps for a local restaurant gave him the capital he needed to buy a piece of property for his young business. Before long, in 1972, he’d met his future wife, Annette Morneault, with whom he would have three children (Cloe, number two, arrived in 1978), and with whom he would found a second business, A.J. Stained Glass Supply, in 1982, the initials of the firm taken from the first names of the couple.

Just as her father had worked in the Aigner family store in Isen, Cloe Aigner spent a fair chunk of her youth behind the counter at A.J. Stained Glass Supply. “I can’t remember when I wasn’t part of the studio,” she tells me over the phone. “But I probably didn’t start working there officially until I was about 12. Being the young trainee,” she adds, “I would often have to do tasks that other people didn’t want to do, like cementing or cleaning glass, which was a really long and rigorous process. But I figured out a way to do it that was quick and efficient—I didn’t want to be sitting there for hours and hours.”

Beyond her experience with the prosaic side of her father’s vocation, Cloe Aigner also got to see what inspired him as an artist. “Our house was always filled with art,” she says of her childhood home, “and my dad is an avid reader, so he still has a massive library. He’s got art books from all over the world, and he collects every glass book he can get his hands on. Whenever he’s beginning a new project, he’ll pull out books to gain inspiration. He’s always learning, always studying, pretty much all the time.”

Josef Aigner also takes inspiration from the spaces themselves. “I’ve asked my dad about this repeatedly,” Cloe Aigner says, “to make sure I understood all the layers. He told me that every project is different, but that usually he will walk into a space and get most of his inspiration from that first impression.” 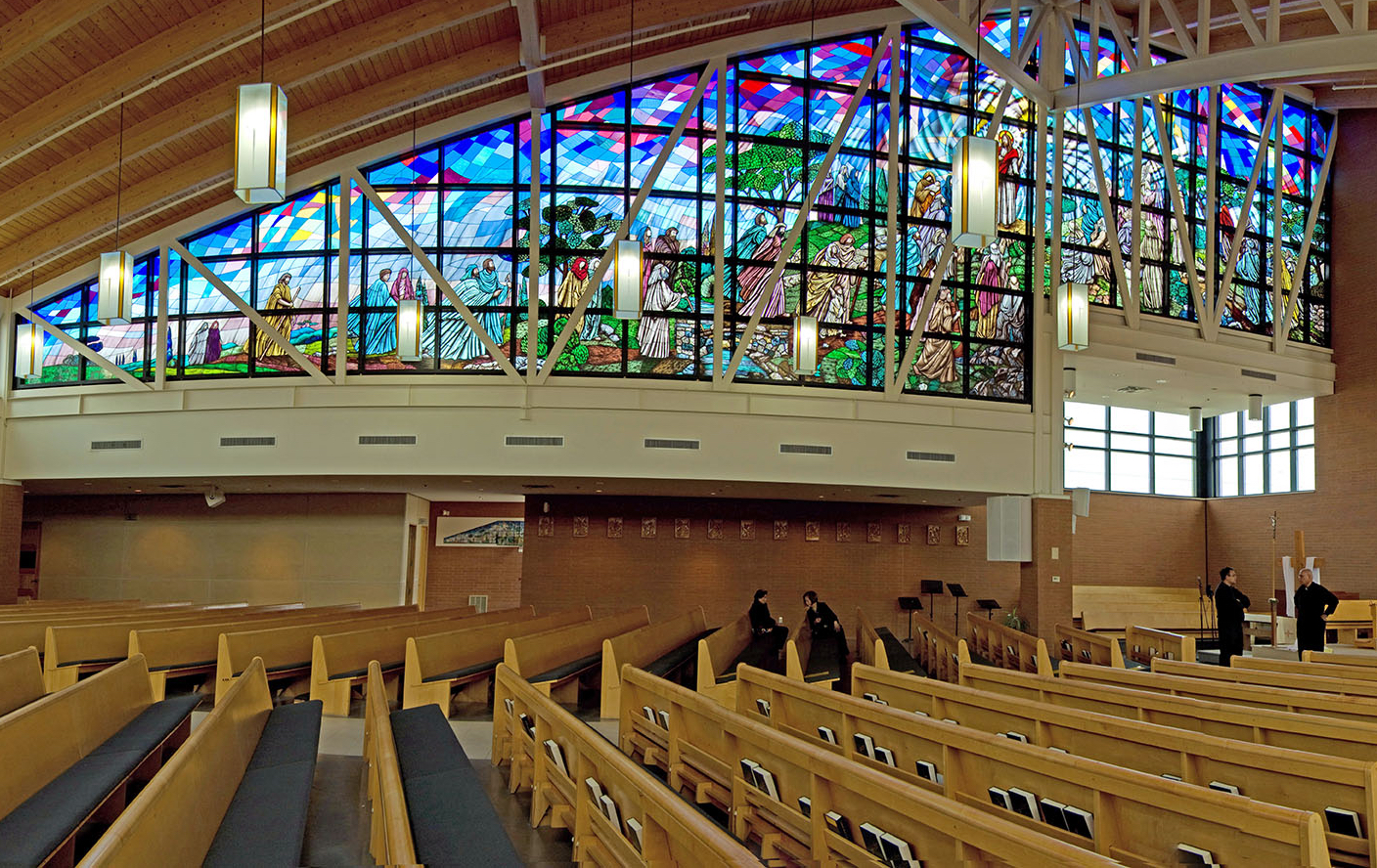 That impression encompasses everything from the architecture to the furniture to the color of the carpeting and the walls. Does the shape of the project space lend itself to one approach versus another? And then there are the windows, whose variables include their size, of course, but also the volume of light that pours through them, the location of the sun from season to season, and the orientation of the windows to the congregation.

If the congregation is the audience for his work, the client is generally the church’s priest. For this encounter, it helps that Aigner is a practicing Catholic who knows his Bible, literally chapter and verse. “You introduce yourself,” Aigner says, “to see if he likes you. And then it’s very important that you totally tune into him. If you try to sell something to a priest who has studied in the seminary for six years, well, you won’t fool him. He’ll know within half an hour whether you know what you are talking about or not.” 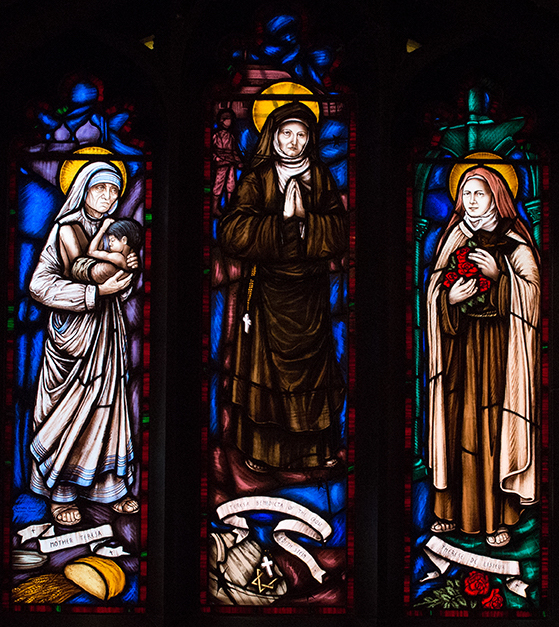 Aigner begins by inviting his clients to share their ideas. “I’ll ask them, ‘What do you see?’ If the answer is, ‘I don’t know,’ then I make suggestions based on the architecture. If the church features a number of small windows, I might suggest symbols, maybe of the Apostles. If the window size allows, I might suggest the life of Christ, which works out to around 80 or 90 windows.”

Sometimes, ideas come to Aigner as if in a vision. The 40-foot-high, 144-foot-long wall at Saint Francis Xavier Church in Mississauga, Ontario, just outside of Toronto, induced one such thunderbolt. “The priest said, ‘Now Josef, what do you suggest?’ Well, I was standing there, looking at this enormous expanse, and told him that the only thing that would work was the Sermon on the Mount. I immediately saw Christ standing at the highest point and people streaming toward him. I could picture them walking, jumping over a little pond or a river, a whole story going on and on for 144 feet. In this case, in a certain way,” he concludes, with no small amount of understatement, “I think it worked out.” 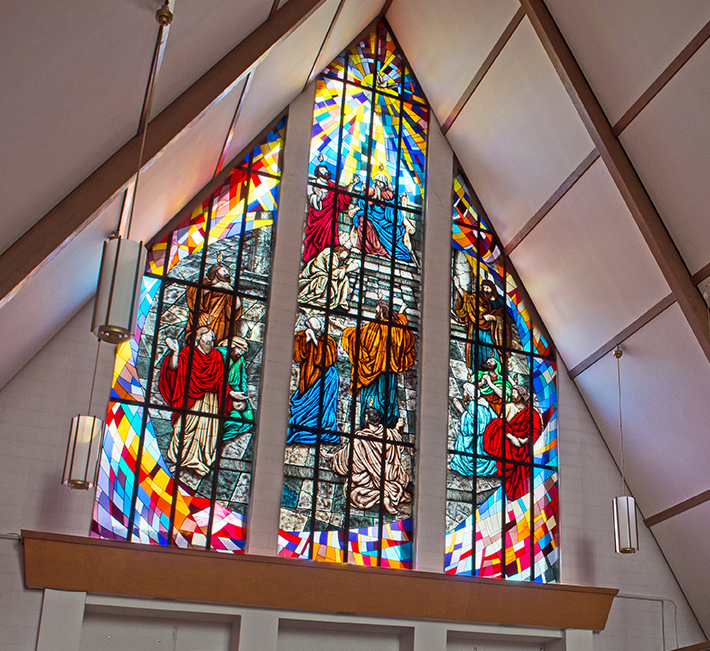 Another window that worked out was the one the Aigners donated to the family’s place of worship, St. Dominic’s Roman Catholic Church in Oakville, which is just a little bit farther southwest of Toronto than Mississauga. That was the church Cloe Aigner attended when she was a teenager. “We went there for a while,” she says, “about 10 years. The donation happened near the end of our time there.”

“Over the years, I got very friendly with the priest,” Josef Aigner explains, “so we had a lot of discussions. He told me that when the sun shined in, it just lit up the altar and he couldn’t see a thing. Naturally I suggested a stained-glass window, but he said, ‘Oh, we would love to have a stained-glass window but there’s no money for that. We couldn’t afford it.’ So I spoke with my wife. ‘Wouldn’t it be nice,’ I asked her, ‘to donate a window to the church in the memory of our parents [Johanna and Josef Aigner, Grace and Edmund Morneault]?’ My wife thought that was a great idea, so I proposed it to the priest, who said, ‘It’s a very big window; I’ll believe it when I see it!’ But we made a design for it of the Pentacost, he approved it, and then we went ahead and made it. When the window was installed, the priest was astounded, he couldn’t close his mouth. But when you work in stained glass,” Aigner says, “sometimes you work for the glory of God.” 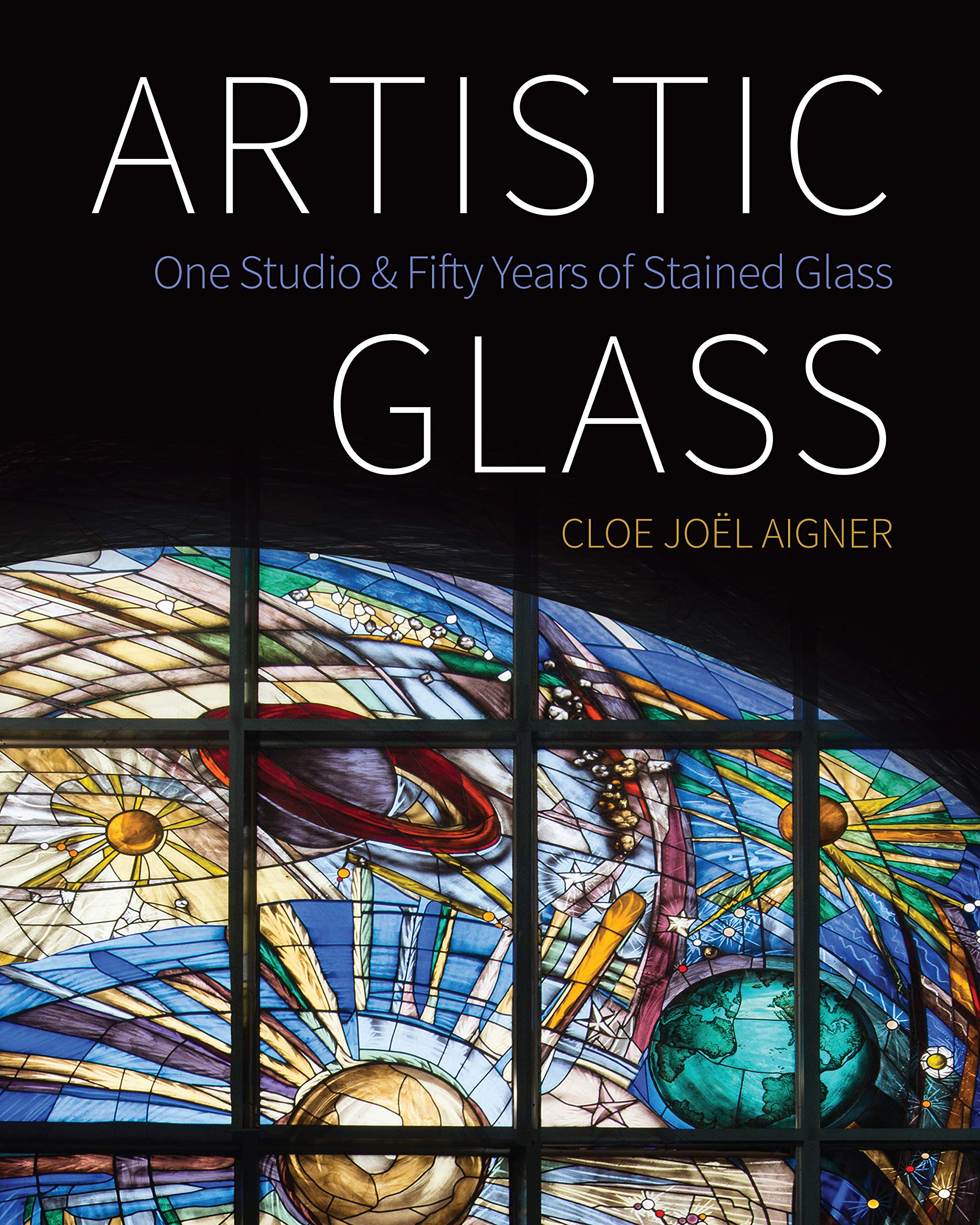 Priceless Tiffany Collection Flees One Earthquake Zone, Lands in Another

These People Love to Collect Radioactive Glass. Are They Nuts?U.S. Studio Art Glass, Before and After Chihuly