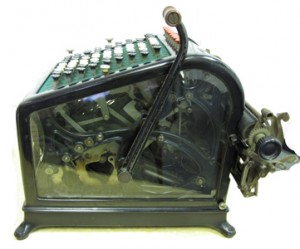 Andrew and I were at Alameda last weekend (he’s our resident tech guru and wanted to see a real live antiques show). In case you haven’t heard of The Alameda Point Antiques and Collectibles Faire (I hate that extra ‘e’), it’s one of the largest and best get-togethers on the West Coast for people who want to browse, buy and sell a wide range of antique and vintage items. It’s held monthly, rain or shine, on one of the WWII era runways of the old Alameda Naval Air Station. It’s got sweeping views across the Bay of the San Francisco skyline. I’ve been going for years.

Normally when you enter the gates of Alameda, you pretty much expect three hours of walk-around to look at all 300 or so amazing vendor booths. And usually the first couple of rows I’m half asleep and don’t find anything great. 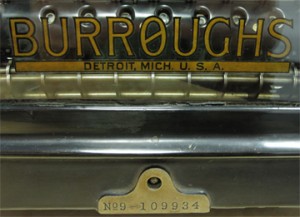 So imagine my surprise when in the very first row, out of the corner of my eye, I spotted a perfect acquisition for our office (given that we need a new accounting system anyway) – a 1908 Burroughs adding machine.

It was the beveled glass that blew me away. I’ve seen plenty of antique adding machines before – most notably the Comptometer, a very cool device invented by Dorr Eugene Felt. But they’re usually not that eye catching. This Burroughs thing was an amazing beast, with see-through sides so you could see all the inner workings, and a cast-iron frame and porcelain finish that just reeked of quality. Finally, the Burroughs stencil on the inside front of the glass was perfectly intact, after 101 years. 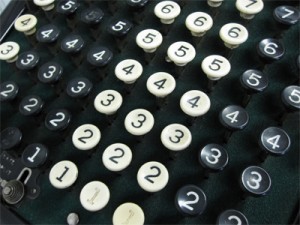 P.S. I also picked up an antique ships foghorn, patented 1901 by  L.D. Lothrop of Gloucester, Mass, a major fishing community just north of where I grew up. The mechanism (bellows) is self-contained in a simple wooden box, with a metal horn on the side, and it still works. And it’s loud! Perfect to sound the alarm in case of imminent collisions, or accounting irregularities!