Middle Earthenware: One Family's Quest to Reclaim Its Place in British Pottery History 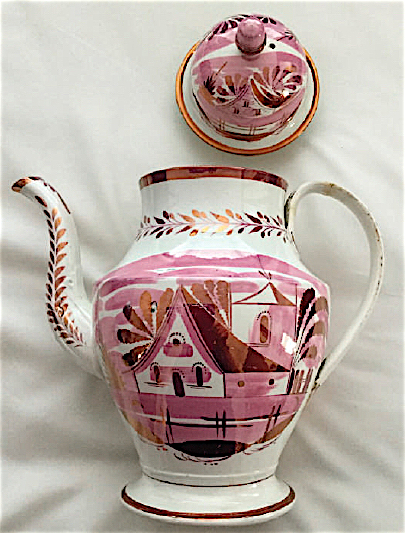 “Church” is one of several hand-painted Patterson patterns glazed in a pink luster.

You will search in vain through all 390 pages of “An Illustrated Encyclopedia of British Pottery and Porcelain” by the late, and much-admired, ceramics historian Geoffrey A. Godden for a reference to Thomas, George, John, or any first name of any member of the Patterson family of Gateshead, which sits on a cluster of hills across the River Tyne from Newcastle in North East England. The one reference I could find to the Patterson surname in the book’s second U.S. Printing from 1966 was on page 162, Figure 269, in which an 8 1/2-inch-diameter plate bearing a pink luster “Church” pattern is listed as the work of Ford & Patterson of Newcastle, “c. 1820-30?”.

“I’ve collected an awful lot of antique-pottery books, but very few have references to Patterson pottery.”

The dearth of Pattersons in so basic a ceramics reference work is odd; for more than 80 years of the 19th century, multiple generations of Pattersons made earthenware pottery in and around Gateshead. Consider, for example, the contributions to ceramics history of the aforementioned Ford’s partner, Thomas Patterson (b. 1780), who manufactured earthenware for 38 years under his own name, at Tyne Pottery and Sheriff Hill Pottery, and in partnership with John Fordy, C.F. Jackson, John Codling, and Jacob Dawson, a pottery manufacturer from nearby Sunderland.

Thomas Patterson’s second son, George (b. 1820), one of 12 children produced by Patterson’s heroic wife, Hannah, followed in his father’s footsteps, taking over at Sheriff Hill Pottery and remaining in the trade for roughly half a century. For his part, Ephriam Patterson (b. 1814) is listed as a potter in the 1841 census. Ten years later, the census of 1851 lists him again as a potter, while his father, Ephraim senior (b. 1778, a brother of Thomas), has left his previous career as a pub keeper to become a packer of earthenware. Ephraim junior’s son John (b. 1848) was a pottery foreman in 1871, while John’s brother, another Thomas (b. 1851), was painting pottery that same year. Unlike the elder Thomas Patterson, who would make his name at Sheriff Hill, this Thomas would go on to run Carr’s Hill Pottery before moving across the river and downstream to Tyneside to manage St. Anthony’s Pottery, which boasted a “capital clay pit, the earth from which is noted for its fineness and all round suitability to pottery purposes.”

“Bird’s Nest” patterns are thought to symbolize marriage and/or family. Here, a young man appears to be offering a nest to a young woman.

If this very abbreviated history of the Patterson family’s pottery roots sounds like a genealogy project, that’s actually how the whole thing got started. “My twin brother, Philip, researched our family history in 1982,” Tony Patterson tells me via Zoom. “He identified our great-great-grandfather, Thomas Patterson, as having manufactured pottery.” In turn, that revelation led to the subsequent discovery that multiple Pattersons were potters during the Victorian Era.

At first, Patterson didn’t think much of the news unearthed by his chronologically older brother, but other members of the Patterson family were spurred by this new knowledge about their 18th-century relative’s vocation to collect a few pieces of their forebear’s work. “They went to many antiques fairs looking for his pottery,” Patterson says. “Over a spell of 23 years, they only managed to purchase a dozen pieces. Some of them weren’t even marked, so they had to rely on the word of the antiques dealer to know it was a Patterson-manufactured piece.” 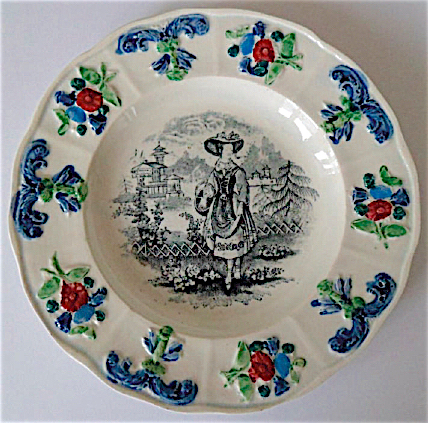 In the center of this Patterson plate is the “Highland Dancing Lass” pattern. The embossed pattern on the rim, though, has also been found paired with other transferware patterns.

Patterson didn’t pay too much attention to any of this until 2005, when a visit to the churchyard grave of his mother-in-law’s great-grandmother got him thinking. “We found the grave,” he remembers, “and I started to consider what my brother had learned about our great-great-grandfather. I checked his research to see if he was correct, and indeed he was.”

Since then, Patterson has been on a mission to restore his family’s place in British pottery history. To this end, he has recently self-published an 80-page book titled “19th Century Patterson Potters and Pottery,” which includes a recitation of his family’s genealogy as it relates to their involvement in pottery manufacturing, a list of various Patterson partnerships, a catalog of manufacturer’s marks, and some 50 pages of photographs of various transferware and hand-painted patterns used by Patterson potters. Many of the examples that fill Patterson’s book are photographs of pieces in his collection, which now numbers roughly 150. 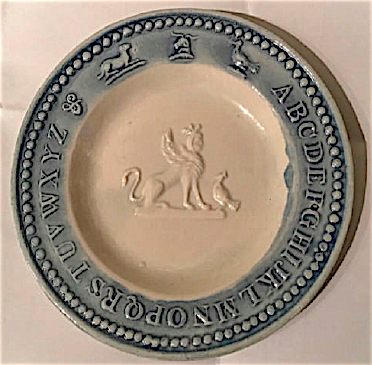 A Patterson plate for a child’s tea set.

Among the coffee pots, teapots, plates, platters, cups, saucers, mugs, and bowls that Patterson has collected are a large number of those transferware pieces, in patterns from Albion and Asiatic Pheasant to Willow and Woodland. More than 30 of the patterns in “19th Century Patterson Potters and Pottery” have yet to be identified, although Patterson drops details about some of these mystery patterns in the hopes of encouraging further scholarship. For example, alongside “Unknown Pattern” numbers 2, 4, and 9, Patterson notes how the molding around the rims of these plates can be found on other plates decorated with different transferware patterns at their the centers. Could the inconsistency of these pairings offer clues to the identity of these patterns?

Other patterns are better known, as they were used by multiple potteries—in some cases, the brass plates from which the transferware designs were made were prized as much by pottery manufacturers as thieves. We see blue cherubs enjoying a bacchanal, numerous examples of young couples symbolically studying bird nests, hand-painted patterns in pink of churches and cottages, a falconer and his hounds surrounded by the four seasons, a boy procrastinating with his dog before heading into a schoolhouse, another of the same lad playing with the animal after being released from educational bondage, and many scenes set in romantic or exotic locales, including the Danube River, Greece, and along the Bosporus in Turkey. 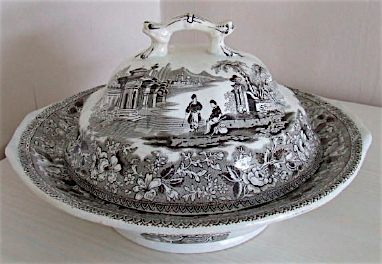 Scenes of exotic places such as the Bosporus Strait in Turkey (seen here) were common to Patterson and other 19th-century transferware potteries.

In the course of researching his family’s pottery history and writing his book, Patterson became immersed in such depictions. More practically, his education about his great-great-grandfather and other Pattersons also included a crash course in how to buy at auction. Like most, he failed at his first attempt to purchase a piece of Patterson online. “I bid on it,” he says, “but I was unsuccessful, which was disappointing because it didn’t go for that much more money than I had bid.” Patterson resolved not to miss the next piece that came up. “That really triggered my interest,” he says of his first acquisition.

Other lessons were more costly. “My wife and I went to an auction in Lincoln one day,” he recalls. “The first 10 lots went from between 5 and 15 pounds. The lot I was interested in was number 11. I had my paddle in hand and was ready to bid, and then the auctioneer said, ‘Right, who’ll bid me 20 pounds?’ Right away, somebody behind me bid 20 pounds, then it was 25, 30, 35, 40. I eventually had to pay 65 pounds for that lot. You might say, ‘Well, that’s not a lot of money,’ but up to that point, I had been paying much less.”

In fact, Patterson would pay more. “The pink luster coffee pot that’s on the front cover of the book was purchased from an American auction house,” he says. “I paid 200 pounds, plus postage, for it. Actually, the lot included two coffee pots, but I was only interested in the pink luster one. Later, I sold the other for 90 pounds, so I got a little bit of my money back.” 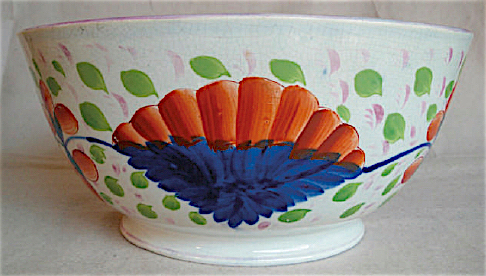 “Gaudy Welsh” is a painted Patterson pattern that seems to predate the naive brushwork of British painters Howard Hodgkin and David Hockney.

Transferware produced in Britain’s pottery mecca, Staffordshire, doesn’t go for much more than that, so low prices don’t account for the ghosting of Patterson and Gateshead pottery by Geoffrey A. Godden. Still, if Patterson pottery wasn’t on Godden’s radar, he was hardly alone. “I’ve collected an awful lot of antique-pottery books,” Patterson tells me, “but very few have references to Patterson pottery.”

The most plausible reason for the omission may be Gateshead’s location in England. Gateshead and Newcastle on the other side of the River Tyne are in North East England, an order of magnitude more distant from London than the Northern England cities of Liverpool, Manchester, and Leeds. That meant that these population centers, along with Birmingham in the Midlands and London to the south, were relatively close to Staffordshire. By comparison, Gateshead was practically in Scotland, or so it must have felt in the Georgian Era before railways collapsed distances in the middle of the 19th century. 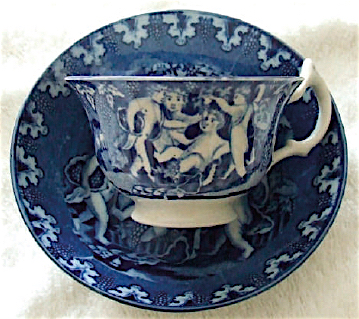 For a while, there were plenty of “capital clay pits” to keep the Gateshead area potteries supplied with the raw materials needed for their exports to Norway and customers in the British Isles. Eventually, though, business was good enough for the extended Patterson family that clay had to be brought in from Cornwall, which had been supplying Staffordshire potteries with white clay for porcelain since the end of the 18th century. “In the course of my research,” Patterson says, “I found a bill for clay that was transported from Cornwall up to Gateshead.” A second piece of evidence indicating the size of the Gateshead ceramics industry was a newspaper advertisement placed by George Patterson, in which he expressed his interest in purchasing 200 tons of clay to keep the 60 men, 26 women, 32 boys, and 15 girls working at his earthenware pottery on Sheriff Hill productively occupied.

The potteries in and around Gateshead, then, represented far more than a minor cottage industry. Geography aside, how could the Geoffrey Goddens of the ceramics world have missed them? In the end, it may have been nothing more than a routine case of ingrown conventional wisdom. “I wrote Godden when I was beginning my research,” Patterson says. In his book, Patterson describes Godden’s response as “far from enthusiastic.” “It motivated me to prove him wrong,” Patterson says. “Perhaps if he’d let me down in a gentler fashion, I might not have proceeded.” 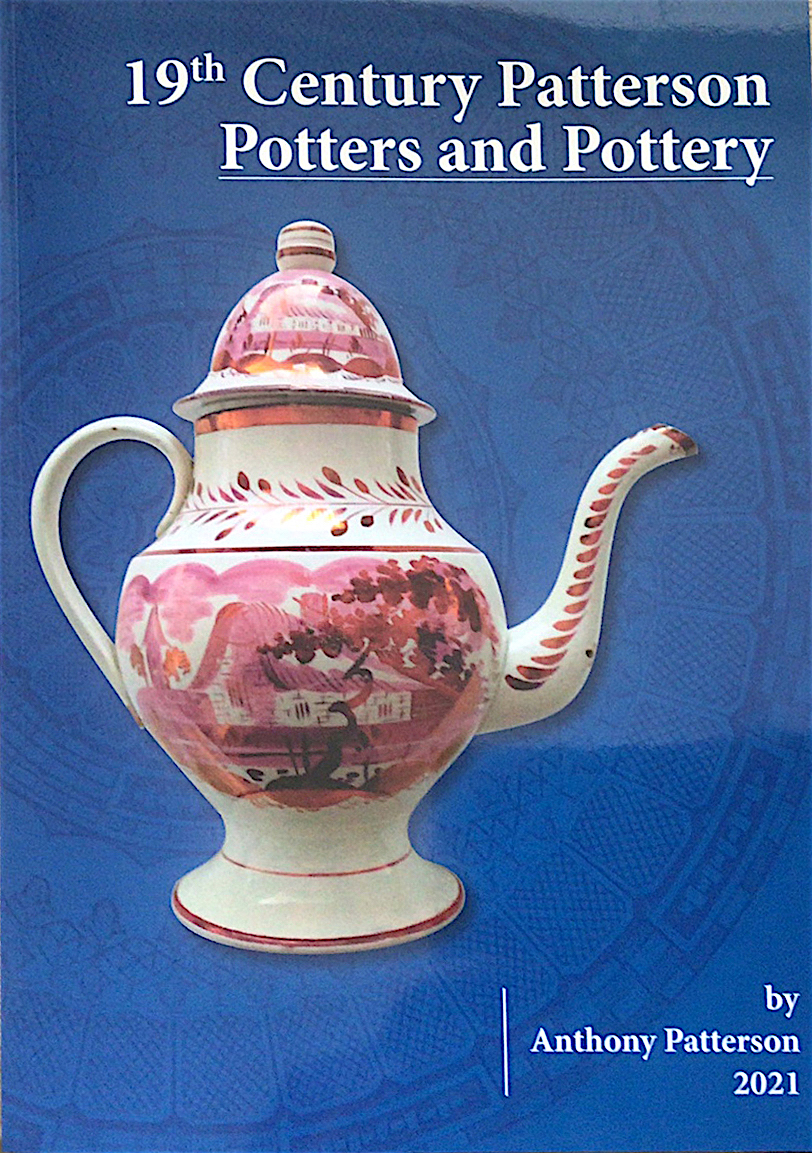 (All photos courtesy of Tony Patterson. To order a copy of “19th Century Patterson Potters and Pottery,” email tonypatt1951@hotmail.com. The price is £12.99, plus shipping. To learn more about British transferware, visit the Transferware Collectors Club.)

Formula for Beauty: The Geo-Chemistry Behind Rookwood Pottery

TransferwareTransferware is about as close as you can get to printing on ceramics. Deve…