This article describes folk art paintings detailing the Peaceable Kingdom by three notable American primitive artists. It originally appeared in the August 1945 issue of American Collector magazine, a publication which ran from 1933-1948 and served antique collectors and dealers.

With interest focusing today on plans for world peace, it seems timely to juxtapose three remarkable versions of the Peaceable Kingdom, as interpreted by three generations of native American artists. 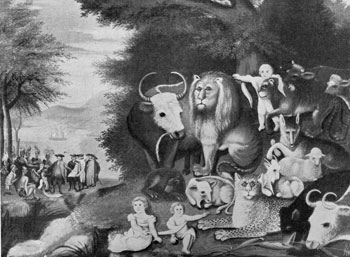 Peaceable Kingdom: Oil on Canvas, painted about 1835 by Edward Hicks of Attleborough, Pennsylvania.

Edward Hicks is the first of these. He was born in Attleborough, Bucks County, Pennsylvania, in 1780. He became, successively, a coach maker and painter, farmer, preacher, sign painter, and painter of pictures. His numerous Peaceable Kingdoms, which Hicks the Quaker minister must have thought of as painted sermons, have become established as classics of American folk art.

In the example reproduced the right foreground illustrates the eleventh chapter of Isaiah. In the background the scene of William Penn treating with the Indians presents a strictly American species of Peaceable Kingdom. The composite scene, Biblical and historical, is both logically divided and held together by the landscape background.

The conception and execution of this painting is typically naive, representing the opposite in every way of the academic tradition in American art which was beginning to flourish at the time (about 1835). The quality of the composition scarcely needs comment; it illustrates most perfectly the manner in which our gifted self-taught artists approached their subject matter with fresh vision, sound craftsmanship, and a sure sense of design. It was this combination, seen at its best in the work of Edward Hicks that created an important native tradition in 19th Century American art.

The India ink pen drawing, here shown for the first time, was executed by another Quaker preacher, who was also a physician and dentist. Dr. William Hallowell of Norristown, Pennsylvania (1801-1890)- lived a generation later than Hicks, who died in 1849. Dr. Hallowell’s design for his Peaceable Kingdom is more highly stylized. He carried to an extraordinary level the tendency toward abstract design which distinguishes the work of the folk artists.

Dr. Hallowell’s interest in medicine and dentistry is translated into graphic design in the anatomical details of the animals, which suggest their internal as well as external structure. These solid familiar creatures of barnyard and forest look as if they had been sliced paper thin and then recreated and revitalized in terms of dynamic linear design. Every atom of the drawing expresses the artist’s fascination with line and pattern — the lion’s even denture, the cow’s udder, the neatly spotted leopard, the crisp fringe of pines which crown the mountain. The precise compressed arrangement of the holy mountain and its inhabitants within an embryo-like oval is striking witness to the unselfconscious originality of our early amateur art. 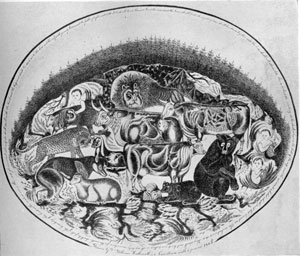 We reproduce a contemporary painting of the Peaceable Kingdom entitled “Holy Mountain” by the negro primitive Horace Pippin, a farmer, porter, soldier, and painter of West Chester, Pennsylvania. It is interesting to appraise the basic difference between the two 19th Century primitives and this 20th Century example.

Pippin’s painting is the most casually composed of the three. Despite its childlike quality one is conscious of a deliberate clarifying and simplifying of idea and composition and execution. This modern artist is aware of other art traditions, and has chosen the literal approach to subject matter, the crisp technique, the neat elementary composition, which characterize American folk art.

A Museum of Modern Art exhibition catalogue for 1938 quotes Pippin on “How I Paint.” Part of this follows:

“The colors are very simple, such as brown, amber, yellow, black, white and green…I work my foreground from the background. That throws the background away from the foreground. In other words, bringing out my work…My opinion of art is that a man should have love for it, because my idea is that he paints from his heart and mind. To me it seems impossible for another to teach one of Art.”

Pippin is a modern primitive by choice, boldly independent, avoiding complexities and subtleties in his art, and producing beautifully simple and vivid pictures in the old pioneer tradition. The inspiration and message of his 20th Century Peaceable Kingdom are best explained by the following letter which Pippin wrote to tell why he painted it:

“To My Dear Friends: To tell you why I painted the pictures. It is the holy mountain my Holy mountain.

“No my Dear friends. The world is in a Bad way at this time. I mean war. And men have never loved one or another. There is trouble every place you go today. Then one thinks of peace. I thought of that when I made — the Holy Mountain. Can there be peace, yes there will be — peace, so I looked at Isaiah XI-6-10 — there I found that there will be peace. I went over it 4 — or 5— times in my mind. Every time I read it I got a new thought on it. So I went to work. ISAIAH-XI the 6-v to the 10-v gave me the — picture, and to think that all of the animals that kill the weak ones will Dwell together like the wolf will Dwell with the lamb, and the leopard shall lie down with the kid and the calf and the young lion and the fatling together. 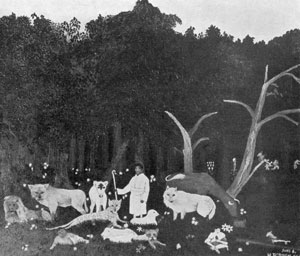 “And a little child, shall lead them to think also. That the cow and the Bear shall feed. Their young ones shall lie down together and the lion shall eat straw like the ox. Then I had something else to think about also, and that is the asp, and the Cockatrice’s Den, which is the most deadly thing of them all, I think, for it can kill by looking at you and to think that a suckling child shall play on the whole of the asp. And the weaned child shall put his hand on the Cockatrice’s Den, and this is why it is done, for the earth shall be full of the knowledge of the Lord as the waters cover the sea. So I painted it so that men may think of it. I can’t say — any more of this painting, from Horace Pippin to his friends.”

“Now my picture would not be complete of today if the little ghost-like memory did not appear in the left of the picture. As the men are dying, today the little crosses tell us of them in the first world war and what is doing in the south today — all of that we are going through now. But there will be peace.”