This article on slipware (pottery with pinpricked designs) made in Pennsylvania focuses on the processes and methods used to create slipware, as well as the history of the pottery and some of the most notable designers and manufacturers. It originally appeared in the December 1940 issue of American Collector magazine, a publication which ran from 1933-1948 and served antique collectors and dealers.

A goal for the collector is old pin-decorated slipware. Even run-of-the-mill slipware does not grow on trees, since its value was not appreciated until about a quarter of a century ago, but pin-decorated examples are scarce. Early American slipware was either undecorated, trimmed with slip, or the design scratched into the clay surface (sgraffito work). 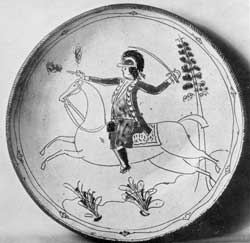 The Soldier on Horseback Design: This sgraffito and slip decorated plate was made circa 1800 by David Spinner in Bucks County, Pennsylvania.

Now and again a piece turns up which indicates that its decoration was produced by means of a set pattern. That is, the design was first sketched on paper, then the latter laid on the clay and the pattern pinpricked through into the clay with a sharp-pointed instrument. After the paper pattern was removed, the artist sometimes completed the pricked lines with the point of an instrument, or left it as it was, according to his whim.

Inscribed on a pottery plate found by Mr. Edwin Barber in Pennsylvania a number of years ago (the plate that started all this interest in early slipware) is an American eagle surrounded by birds and foliage, the design carefully applied, suggesting that the potter may have resorted to a pattern to trace his design on clay. It bears the inscription, “Fish and birds are too good for rough fellows and should only be served to gentlemen,” and the date May 16, 1828 — a ripe age for any piece of pottery. 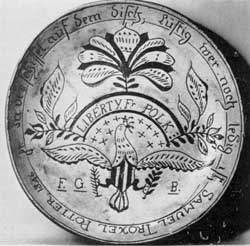 Signed Samuel Troxel: In the center is lettered, in an arc, "Liberty Fr. Polk," while the outer border with Troxel's name and date 1846, is in German. This pottery was in Montgomery County, Pennsylvania.

Pottery has a way of finding and keeping the spotlight. There was Rebecca and her pitcher; products of the potter’s wheel were used repeatedly by the prophets of the Bible to illustrate some fine moral or truth: the pottery lamps of the virgins; the widow woman’s containers for oil; the water pitcher of the Samaritan — all were dramatic “props” in the life and literature of ages long past. Later, a Persian poet made immortal the status of the Persian jug and wine bowl; and not so many decades ago a young English bard indited glowing words to an urn.

A piece of clay in the hands of a man with creative turn of mind becomes a model of artistic grace or a vessel well-fashioned for common uses. The workman produces his simple vessel and tries his hand at raised and incised design. When he wants it to be a perfect thing and his hand is not skilled to make the picture of his ideal, he may trace it on paper and then pinprick through to the clay. 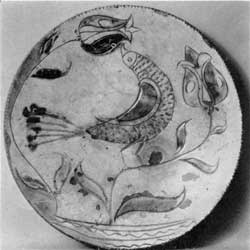 18th-Century Pennsylvania Pottery: Here the elements of the design, peacock and tulips, are characteristic of Pennsylvania-Dutch decoration on various materials for at least a century.

On the pottery of prehistoric Egypt the incised line was used. Favorite designs in all ages are animals, landscapes, hills (or pyramids), trees native to the country of the potter, and boats or tribal insignia. Geometrical designs on the pottery of the Near East were incised on slipware — Sassman, a Persian potter of the 6th Century, made use of this type of decoration.

Where the potters of Pennsylvania used the tulip, fuchsia, rose, and dahlia, the Persian used azalea and arabesque flowers; the Pennsylvania potter resorted to the eagle and the Persian used exotic birds or deer. Peacocks were used by both, for in Pennsylvania, as in the Near East, the peacock was a familiar fowl. Again, the Persian model was a warrior on horseback; on the pottery of our early slipware it was the Continental officer on horseback. The hawk god was the subject of the primitive; the eagle the design of the early American. And yet people talk about sgraffito work of the 18th-Century potters in this country as if it originated with them and was something local and hitherto unknown. It is a method as old and ancient as the potter’s craft itself. 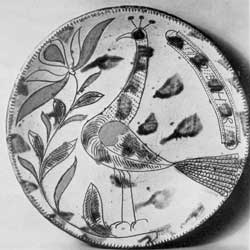 An Early Pinprick Decoration: This plate, dated circa 1793, is attributed to Henry Roudebuth, whose pottery was in Montgomery County, Pennsylvania.

The Pennsylvania potters, and those in other states as well, simply made use of an ancient method of decoration to suit their own needs; for example, pie plates. From the remnants of the works of these potters, pie plates were more numerous than any other single vessel. Pie was a favorite dish of the early Pennsylvania Germans. Dishes for this toothsome pastry were made in quantities by all the old potters. They were ordered for common use, for wedding, birthday, christening gift; whether unadorned, decorated with raised slip, incised, or pinpricked, they portrayed in picture and script the homely daily tasks.

The best of the slipware makers used the pinpricked method of transferring designs from paper pattern to plates, bowls, pitchers, mugs, and milk pans. In the counties of Bucks, Berks, Lehigh, Montgomery, Schuylkill, or wherever the trade was practiced, the potter made use of the traced design. 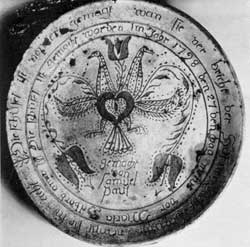 Signed by Samuel Paul: The inscription in the two circular bands at the rim is in German and includes the date 1798. His pottery was near Tylersport. Here the decorative motifs are a double-headed bird and tulips.

Near Tylersport, Montgomery County, John Neesz (Nase) and his father Johannes Neesz, applied leaping stags, sprays of conventional flowers, festoons, to plates and vegetable dishes, platters, sugar bowls and pitchers. They made sets of dishes and sets of sugar bowls and creamer pitchers covered with dark glaze like some of the English ware, having ornate handles and festoons of slip. Humor crept in — crude, inelegant, timely — pointing obvious morals. In the possession of the Pennsylvania Museum is a piece of Neesz (Nase) pottery in black-and-white, traced on the red body and forming the figure of a bird standing amongst heavy foliage. In German script are the words: “I cook what I can, Is my pig neat, so is my man.”

Certain of the pottery made by John Neesz (Nase) is covered with a thin varnish, a process known as “smear glaze.” There is also proof that patterns were used by this man for some of his pieces. On a large pie dish of smear glaze is scratched the figure of a mounted soldier, resembling in many respects the figure and face of George Washington. The horse which he rides is in line relief, the figure of the mounted man in color, solidly filled in. Applied to leaves and flowers are patches of colored glazes. Sometimes a sabre was substituted for a pipe or a trumpet in the hand of a mounted figure. 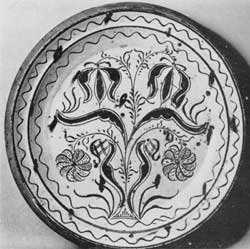 By Jacob Scholl: 21 conventional design achieved by pinpricking. He worked circa 1835-1840 and his pottery was just south of Tylersport.

Tylersport seems to have been a favored location with these Pennsylvania potters.  Frederick Hildenbrand, an active competitor of John Neesz (Nase) was two miles west of Tylersport. Although a prolific potter, examples of his work are now scarce, but those remaining show him to have been a gifted workman. He resorted to pattern: on one of his plates is a lion pricked through the white slip. This plate is supposed to have been made about 1830.

Then just south of Tylersport, perhaps a mile, was the pottery owned by Jacob Scholl. He, too, made incised or pinpricked ware rather above the average in quality, displaying in his work real artistic talent. Favorite with him were plaques which he decorated with floral designs, but without inscriptions. Several plaques of his are dated about 1836. From the Scholl pottery came a pie dish which bears the incised device of a large eagle. In each of the bird’s talons is a spray of flowers; it holds a banner carrying an English inscription: “Liberty in the Year 1832.” Small, curved marks made with an instrument, probably through a-pattern, make the feathers.

Scholl’s descendants own some very beautiful examples of his yellow slipware. Floral designs are etched in the slip, leaves and petals of flowers are tipped with green and blue pigments which have been well glazed. These are said to be the only examples of his pottery. A workman of Scholl’s was Michael Fillamn, who produced some of his best pieces. 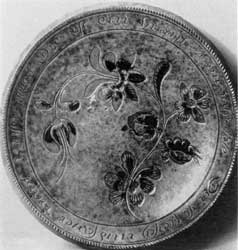 Plate by Johannes Neesz: It bears an elaborate pinprick floral decoration and the date 1810. The Neesz pottery was also near Tylersport.

To this country in those early days came English potters who were familiar with the making and decorating of slipware. They were employed by the Pennsylvania potteries; however, English text was rarely used on the old pieces, possibly because most workmen, English and German, were uneducated. Simple men, their sentiments are crude and provincial: “To eat on this dish, it does not please me; The cook has not washed his fingers.” This in German script on an old plate.

Michael and Andrew Headman had potteries near Rich Hill, Bucks County, more than seventy-five years ago. Benjamin Berge was a potter in Montgomery County; there was one Joseph Smith of Bucks County; an Abraham or Isaac Stout (1775) in eastern Pennsylvania; and a Christian Klinker who had a plant near Bucksville, Bucks County, in 1792. The Cape Pottery was located in Montgomery County. In 1809 Philip Kline made, among other pieces, many puzzle mugs at his Bucks County brickyard and pottery. His incised or pinpricked eagle repeating the word “liberty” is well known. Elaborately decorated dishes made by John Leedy in the village of Sanderton, Montgomery County, in the late 18th Century, are preserved as heirlooms. John Spargo refers to Leedy’s death as occurring in 1838.

David Spinner, of Swiss parentage, was considered one of the finest of the potters. He decorated his own wares and was in business until 1811; became a justice of the peace in Bucks County, where his family was very prominent and influential. He, too, made pinpricked pieces.

Pennsylvania seems to have been overrun with good potters: Jacob Taney of Bucks County and Samuel Troxel of Montgomery County. A plate marked H R and attributed to Henry Roudebuth, of Montgomery County, is in the Metropolitan Museum, as are examples of Spinner, Scholl, Neesz (it seems to be spelled a number of ways), Troxel, and Samuel Paul.

Potters made all of the great plates for pie and other provender in the counties where pie was a daily dish just as it is today. The stranger traveling through those counties will see on the serving tables of inns steaming pies of great diameter, made after the recipes of the women of another day when the pottery pie plates were pinpricked with emblems of liberty and scratched with bucolic humor at the hands of the old slipware workers.

Anyone who prizes the folk art of the United States, and particularly the early art of the Pennsylyania settlers, will find the slipware pottery stimulating research and acquisition.