Smoking is growing more taboo in the United States now, but back in the 1930s, cigarettes were sexy. And where there was smoke, there were matches. At one point, nearly every business in the country, whether it was a national chain or a local Mom ‘n’ Pop, produced logoed matchbooks to help their customers fuel their nicotine habit—now known to be a deadly addiction.

“You’d go to get medicine, and the kindly pharmacist would offer you matches.”

In the early 20th century, businesses saw matchbooks as a cheap and persistent form of advertising. Store owners knew that every time one of their customers wanted to light up a cigarette, they were likely to pull a matchbook out of their pocket or purse first, and so nearly every company offered free matches in paper covers emblazoned with ads.

During the Depression, Lion Match Company, a smaller competitor to match giant Diamond, decided to take matchbook advertising up a notch. Around 1935, Lion introduced, and trademarked, the concept of “feature matches,” which had advertising art on their covers as well as the matches themselves. Despite Lion’s trademark, its novel concept was widely copied. Today, feature-type matches—like the Red Slipper Room matches above from David Hart’s The Invisible Agent blog—are among the hottest items on the collectible-matchbooks market. 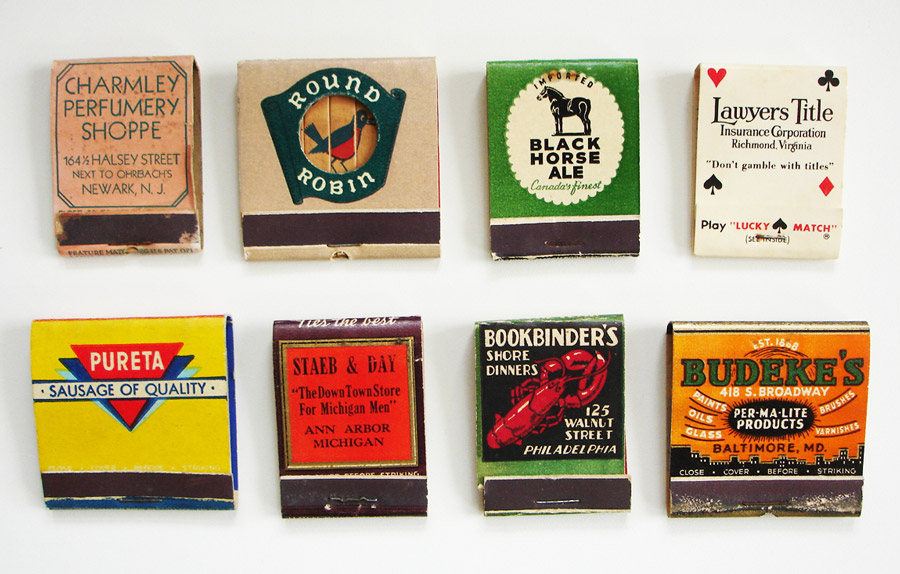 Matches as lipsticks, robins, beers, sausages, ties, paint brushes, and a lobster, from a collection belonging to Lea Redmond of Leafcutter Designs. The Lawyer Title book (top right) could be used to play a gambling game. Click image below to see the matches up close. Photos by Redmond. 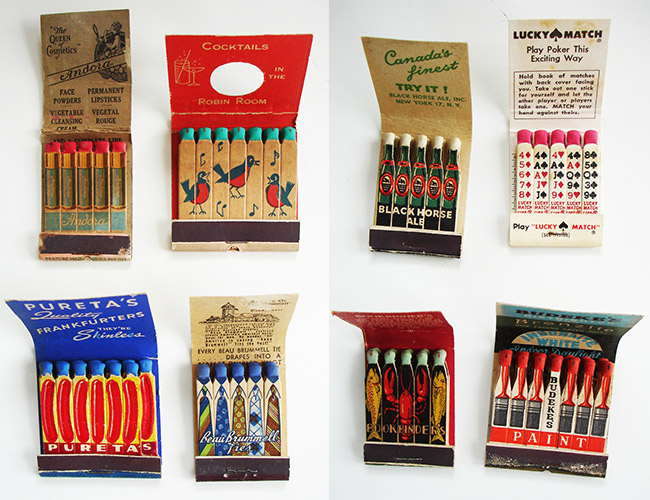 Some feature matchbooks have images printed across the whole row of matches. In others, each match was a little work of art, resembling a beer bottle, a bowling pin, an Italian chef, a woman’s leg, or a naked lady in a swimming cap. Coffin makers even offered matches resembling their morbid products.

“Matches were basically this palette on which almost anything could be printed,” says James Lileks, a matchbook collector, as well as columnist and blogger at the Minneapolis Star-Tribune. “That’s what’s fascinating about them. The feature matches are the high-end stuff. When businesses were popping for them, they were really going all out.

This 1939 New York World’s Fair souvenir contains printed matches, not the wide feature matches. Like the military cleaning matchbook at top, it comes from the collection of Frank Kelsey, a.k.a. ussiwojima on Flickr.

“When I was a kid and I started collecting matchbooks, finding a feature, one that actually had a picture on the matches, was the Holy Grail,” he continues. “You had two choices: You could either use the matches up and see how it affected the design, or you could just leave it intact, which everyone wanted to do.”

Some of these matchbooks were truly over the top, such as the example Lea Redmond of Leafcutter Designs showed us when she introduced us to this graphic corner of tobacciana. One of the matchbooks in her small collection is a clever piece from Durant Plumbing in Oakland, California. The blue exterior is wrapped with a red company delivery truck. But inside is a delightful surprise: The matches are printed as a row of red-capped women in the buff, under a sprinkling shower head, which is printed on the inside cover. 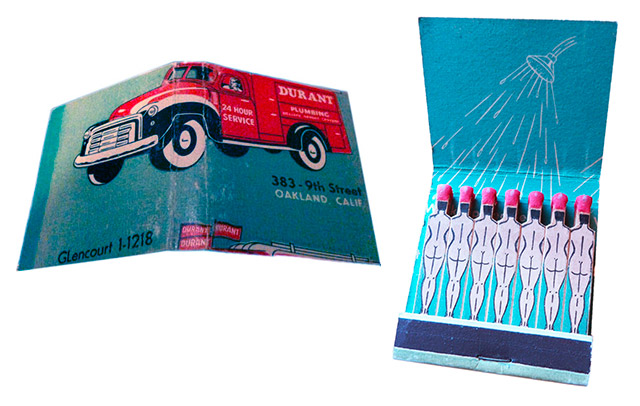 A unique—and slightly risqué—matchbook from Durant Plumbing in Oakland, California. Sorry, guys, Lea Redmond has looked, and there is no full-frontal nudity on these matches.

“In order for that to happen, some matchbook salesman had to really work on a guy.” says Lileks, whose online novel, Joe Ohio, imagines the life of a 1950s matchbook salesman. “He had to talk to a plumber and tell him what he could do, and convince him to spend the money on a custom job like that. Your average gas-station owner or plumber is going to chose some stock art and have their name printed on front. It will be unique on their side of town, but that’s it. So for a guy to really go all out and get custom art that exists nowhere else, I find that fascinating.”

Since smoking and drinking went hand-in-hand, booze was a popular subject. Photos by Frank Kelsey.

The first patented matchbook in the United States appeared around 1889, according to the American Matchcover Collecting Club—and when Diamond Company bought the rights to make them in 1896, they were a flimsy and dangerous novelty. But company salesman Henry C. Traute quickly figured out it was safer to put the striker on the outside of the matchbook, with the printed phrase, “Close cover before striking.” Early paper matchbooks typical had two to three rows of 5 to 10 matchsticks lined up inside to tear out.

“To a Joe Sixpack like me, a match is a match.”

A standard matchcover that held 30 regular-sized sticks would only hold 21 wider feature matches, while a matchbook that usually held 20 matches could contain 15 features. Naturally, these would be way more expensive than standard advertising matchbooks, which a local business could buy for less than $5 per 2,500, according to the American Matchcover Collecting Club. But obviously, the appeal was hard to resist, as collectors have unearthed thousand of examples. 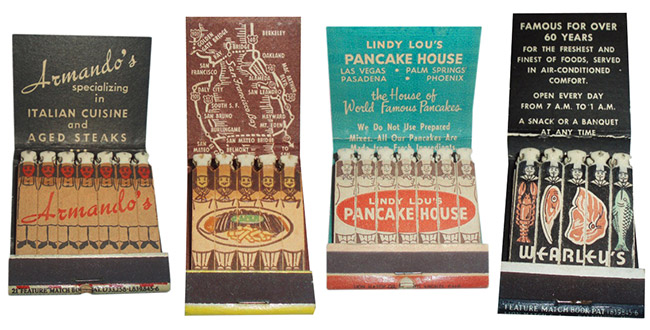 Smoking was encouraged in restaurants, so they often had feature matches, with little chefs in hats. Photos by Frank Kelsey.

“Matchbooks were a unique form of advertising,” says Lileks, whose Matchbook Museum is a Collectors Weekly Hall of Fame. “It was incredibly cheap, it was portable, it was ubiquitous. You carried it with you. Nobody carried any other ads around with them. Nobody used and interacted with an ad like that.”

Jack Barnes, an 81-year-old Republican State Senator in New Hampshire, who has collected thousands of matchcovers since he was a little boy, inspired his son, Warren, to launch Matchcover Guy. He explains that Diamond, the match company that first developed advertising matchbooks, called their matches the “20 Little Salesmen.” 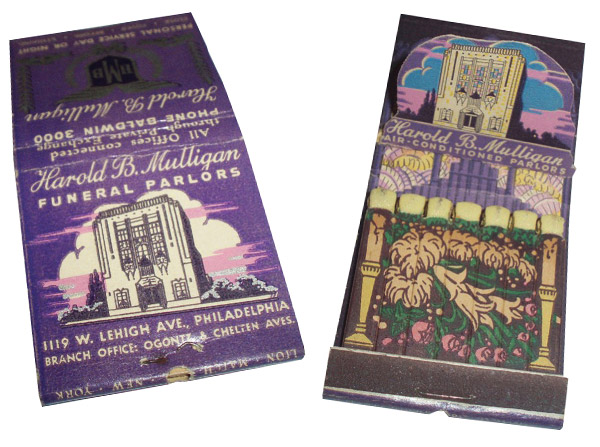 Funeral homes, too, offered matches for the aggrieved. Photos by Frank Kelsey.

“Anytime you opened that matchcover and you lit your cigar or cigarette, you’d see the advertising on it,” Barnes explains. “And with a 20-strike, you’d be opening that matchcover 20 times.”

The genius of feature matches is that you didn’t just see the advertising on the cover; the matches also reminded you of the product. However, Lileks thinks this could have backfired on a company. “When you find the feature-type, they come intact because people set them aside and said, ‘I don’t want to use this, it’s too cool,’” he says. “Nearly every matchbook, unless it came from a collector, has matches ripped out of it.” 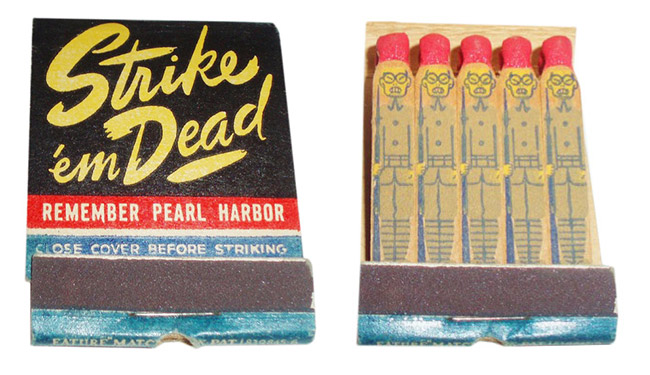 This World War II era matchbook shows how outrage over the Pearl Harbor attacks led to an anti-Japanese fervor. Photos by Frank Kelsey.

Some features are disturbing to 21st-century eyes, such as the World War II-era “Strike ‘Em Dead” matchbooks, which have offensive caricatures of Japanese men on the matches. Others are a little risqué, part of the girlie pin-up culture geared toward men. Still others are so charming and cartoonish, shaped like fish, hot dogs, hula girls, or Colonial soldiers, they could be toys for children—or, according to Barnes, women, whom the tobacco companies were trying to woo.

“To a Joe Sixpack like me, a match is a match,” Barnes says. “If I go into a bar and have a beer, and I ask for matches so I can light my cigar, and they give me some fancy matches with these beer bottles on ‘em, I’m not too excited about them. I light the thing, and I throw it the heck away. I got a hunch some of those features were geared toward the females. They probably said, ‘Oh, isn’t this cute!’” 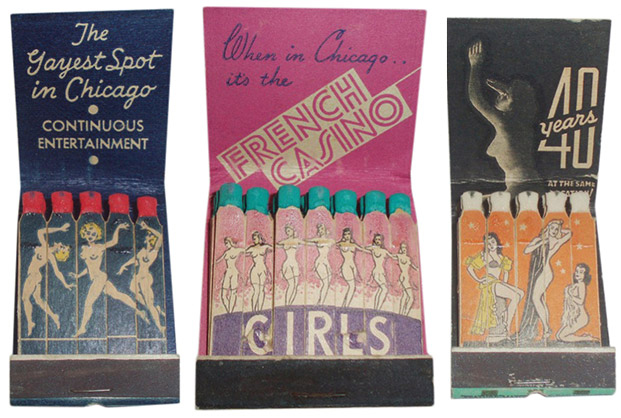 These feature matches, of course, were intended to appeal to men. Photos by Frank Kelsey.

Knowing what we know now, it’s easy to judge our grandparents and great-grandparents for this toxic habit. During the Depression, pre-rolled cigarettes were cheap—thanks to turn-of-the-century technology that allowed tobacco giants to churn them out en masse. Even poor folks hooked on nicotine could puff through packs a day quite easily.

A lit cigarette on the lips of a matinee idol or ingenue symbolized so many things: Mystery, sensuality, sophistication, intellectualism. For the most part, Americans simply did not link smoking to death. In fact, the first widely accepted study asserting the correlation between tobacco and lung cancer didn’t appear until 1950. 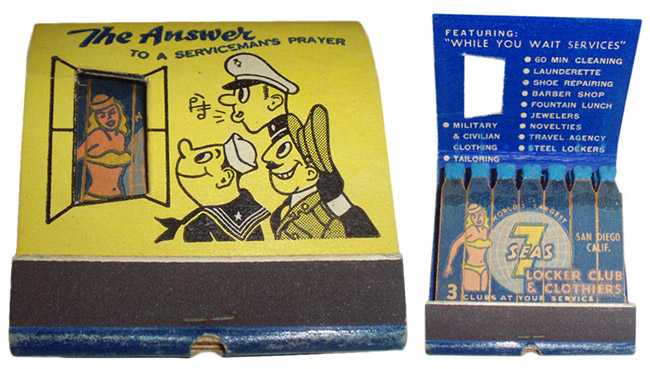 You’d never guess, but these feature matches are selling a laundry service. Photos by Frank Kelsey.

“Fifty or 60 percent of the population smoked,” Lileks says. “It was expected that a pharmacy would have matches. You’d go to get drugs, and there’d be the kindly pharmacist in his white jacket offering you matches. To the modern mind, this is preposterous. This is like, ‘How could you possibly associate the medical profession with matches and smoking!’ But this was an era when the Camel ads were saying that 9 out of 10 doctors preferred Camels. The attitude was, ‘This is a completely normal part of society.’”

As more studies came out warning of the health risks, smoking went into an inevitable decline. And thus, the golden era of advertising matches also flamed out, taking those extravagant feature matches with it. 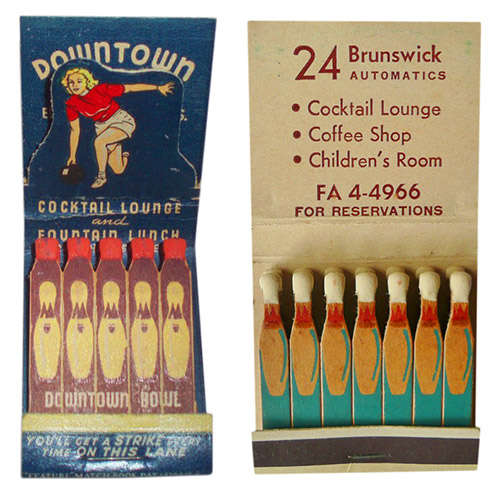 Bowling alleys, too, were popular spots for smoking. Photos by Frank Kelsey.

“If somebody started making feature matches today, it would be so damn expensive, nobody would buy them,” Barnes says. “And there are so many states that don’t allow smoking anymore. I used to go on trips, and I’d come back with 20 or 30 new matchcovers. The last time the wife and I went down to Florida, lo and behold, there weren’t any matches. It’s very difficult to go into a place of business today and get a book of matches. People don’t buy ’em because there’s no smoking in restaurants anymore. For a collector, it’s frustrating. You have to go to eBay, and go to the conventions and swap with people just to get a pack of matches.” 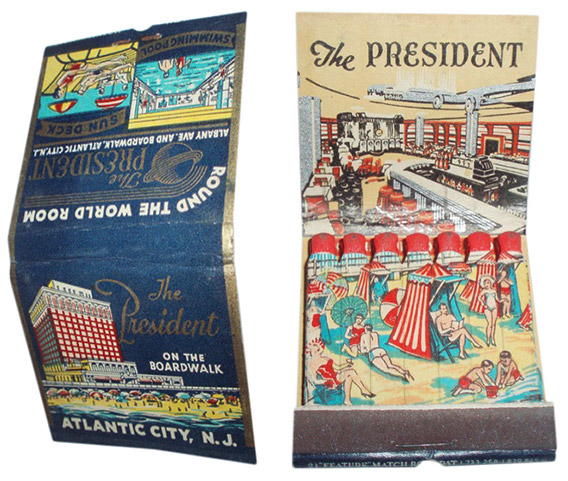 Casinos and hotels wanted smokers to remember their vacations. Photos by Frank Kelsey.

(Check out more of Frank Kelsey’s matchbook feature and printed stick collection on his ussiwojima Flickr page. More images and matchbook history can be found at the Matchbook Museum,  Matchcover Guy, and the American Matchcover Collecting Club page.)

MatchbooksMatchbooks have been around since 1892, when Joshua Pusey patented the idea…