This article describes the famous artwork used for stamp designs, such as paintings and sculptures, noting which pieces of art were effective as stamps and which were not. It originally appeared in the July 1943 issue of American Collector magazine, a publication which ran from 1933-1948 and served antique collectors and dealers.

Paintings and sculpture galore have been reproduced on postage stamps, sort of an Everyman’s art gallery. But this, of course, does not mean that any old work of art makes a good stamp subject. 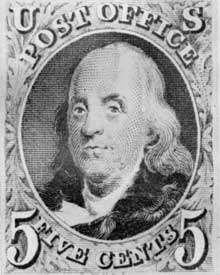 Benjamin Franklin: This five-cent stamp of the issue of 1847 copied the Franklin portrait painted by James B. Longacre.

Pictures generally are too complicated, believes Paul Manship, the sculptor, who designed the current one cent green Four Freedoms stamp. But portraits, like Gilbert Stuart’s “Atheneum” head of Washington, usually do very well, he thinks.

He is certain, however, that Whistler’s “Portrait of My Mother” should never have been converted to Post Office purposes. Probably, Whistler would agree. The adaptors at the Bureau of Engraving and Printing who produced this three cent purple stamp in 1934 to honor the mothers of America not only eliminated the background of the artist’s famous painting of his mother and chopped off her feet but added a very un-Whistlerian vase of flowers. There was a nasty rumor at the time that a florists’ lobby in Washington got this detail inserted to plug flower sales for Mother’s Day.

The Manship comment calls for a glance at the work-of-art stamps issued both here and abroad.

One of the easiest to recall is that three cent light violet stamp of 1940 which borrowed the detail of the Three Graces from Sandro Botticelli’s great canvas, “Primavera.” This was one of Postmaster General Farley’s masterpieces. The stamp commemorated the 50th anniversary of the founding of the Pan-American Union, and the dancing maiden trio, according to the Post Office Department, symbolized North, Central and South America, “A hemisphere of good neighbors.” 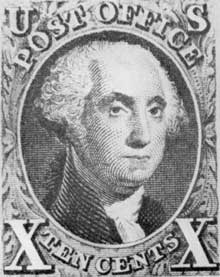 Stuart's Head of Washington: This early United States stamp has as its central design a reproduction of Gilbert Stuart's portrait of George Washington.

“The Minute Man,” the Daniel Chester French bronze, served as the central vignette of the five cent stamp of the 1925 issue commemorating the 150th anniversary of the Battle of Lexington, and Concord. More recently, of course, this symbolic figure has stood guard on millions and millions of War Savings Stamps. French also did the marble bust of Daniel Webster which was used on the three cent Webster commemorative stamp of 1932.

Stuart, Whistler and French, together with Augustus Saint-Gaudens and Frederic Remington, are pictured themselves on the five stamps of the artists’ set of the Famous Americans commemorative series of 1940.

Two of Remington’s drawings have done postal duty on stamps of the Trans-Mississippi Exposition issue of 1898. His “Troops Guarding Train” on the eight cent stamp, shows a detachment of United States soldiers convoying an emigrant train across the prairies. And on the fifty cent stamp, Remington’s “Western Mining Prospector” depicts a gold-seeker with his pack mules in the mountains. 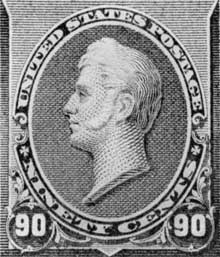 Portrait Bust of Commodore Perry: This was reproduced on the ninety-cent United States stamp of the issue of 1870. The sculptor of this likeness of the naval officer who commanded the fleet which opened trade with Japan was Walcott, one of the lesser-known American sculptors of the Mid-19th Century

“Signing the Declaration of Independence,” that remarkable canvas by John Trumbull which incorporates the portraits of the signers, is minutely reproduced on the twenty-four cent stamp of 1869. The original painting is now in the Gallery of Fine Arts at Yale. Reducing a picture of this scope to a few millimeters is what Manship means by complications.

Vanderlyn’s “Landing of Columbus,” which hangs in the Capitol rotunda at Washington, is another figure-packed picture which shrank to Lilliputian proportions on the fifteen cent stamp of the 1869 series. Twenty-four years later, this same painting was again used postally on the two cent stamp of the Columbian series.

The Columbian designs involved several canvases of broad scope: “Columbus Soliciting Aid of Isabella,” by Brozik; “Columbus Restored to Favor,” by Francisco Jover; “Columbus Presenting Natives,” by Luigi Gregori, now at the University of Notre Dame; “Columbus Announcing His Discovery,” by R. Balaca, now in Madrid; “Columbus at La Rabida,” by R. Maso; “Recall of Columbus,” by A. G. Heaton, now in the Capitol at Washington; “Isabella Pledging Her Jewels,” by Munoz Degrain, now in Madrid; and “Columbus in Chains,” by Luetze, now in Germantown, Pennsylvania; “Columbus Describing His Third Voyage,” by Jover. They all testify to the Manship thesis that many figures do not necessarily add up to a good stamp design. 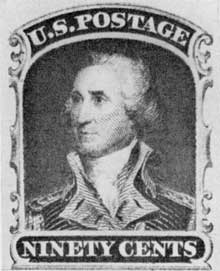 General Washington in Uniform: The original for this United States stamp was the portrait painted by John Trumbull, who served on his staff before going to London to study painting under Benjamin West.

Other paintings that have served on stamps include Lamprecht’s “Marquette,” Heaton’s “Hardships of Emigration” and Frederick C. Yohn’s picture of the surrender of Fort Sackville to George Rogers Clark.

Portrait heads, both painted and sculptured, have been more successful on the whole than historical pictures. Classic stamps of this type are the three cent issues of 1851 and 1861, which handsomely reproduce the Jean Antoine Houdon bust of Washington. Houdon’s bust of Franklin is on the one cent stamp of 1869.

Sculptured portraits of Henry Clay by Hart, Daniel Webster by Clevenger, General Winfield Scott by Coffee, Alexander Hamilton by Ceracchi, and Commodore O. H. Perry by Walcott appear on stamps of the 1870 issue. 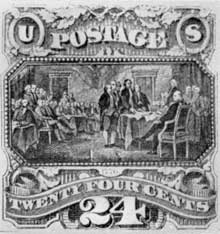 Signing of the Declaration of Independence: Here the original was the painting by John Trumbull which was among the paintings of great American events from the pallette of that artist which were presented to Yale College. This was the beginning of what is now the Yale University of Fine Arts.

Among the portrait painters whose works appear on stamps are Charles Wilson Peale, who did four of the heads of Washington in the set of twelve stamps issued in 1932 to commemorate the General’s bicentennial. Other Washington heads in this series are by Charles Peale Polk, Gilbert Stuart, John Trumbull, Charles B. J. F. Memin, and a pastel by W. Williams. The painting of Franklin, in his white neckerchief and fur-collared coat on the five cent stamp of 1847, is by James B. Longacre.

Many foreign countries have publicized their native artists by showing their work on stamps. Spain honored Goya by picturing his lush “La Maja Desnuda.” Italy chose Della Robbia’s “Bambino.” Greece has used several classic statues of Hermes, Iris and Jupiter, as well as the eternal Venus de Milo, and a few friezes. Belgium honored Rubens with a series including “Helena Fourment and Her Children,” “The Velvet Hat,” and “Descent from the Cross.” Hans Memling, another Flemish painter, also made Belgium’s stamp gallery. 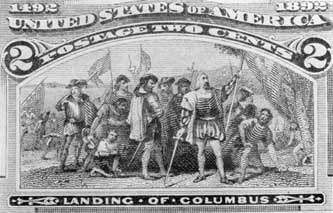 The Landing of Columbus: The original for this two-cent stamp was copied from the heroic painting by John Vanderlyn which hangs in the rotunda of the United States Capitol in Washington.

And so it goes with artists’ creations and stamp designs. A truly great piece of art, or a national art treasure, may make the grade, but the historical or symbolic work of art stands the best chance of adorning a postage stamp — in the United States, at least.