This article discusses primitive American portraits, which were thought crude and undesirable until the 1920s when they became a popular furnishing in country homes. It originally appeared in the August 1942 issue of American Collector magazine, a publication which ran from 1933-1948 and served antique collectors and dealers.

Various articles on what and how to collect have stressed the importance of broadening one’s interest. “Remember,” says one writer, “that the neglected antique of today may become the sought-after one of tomorrow.” Nowhere is the truth of this more evident than with the type of American portraiture known as primitive. 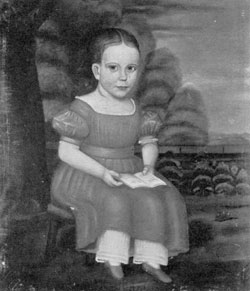 Portrait of a Child: American primitive portrait, done about 1840-50 by an unknown artist. The identity of the subject is also unknown. Against a conventional background is depicted the figure of a little girl, aged about six, in a red dress and holding an Alphabet book. Typical of the work of a self-taught artist, it shows sincerity, fair craftsmanship and excellent detail.

Less than a decade ago these likenesses of moderately well-to-do Americans, done by unknown and largely self-taught artists during the Federal and Early Republican periods, were of little interest to the average collector. Even those who had inherited a stiffly posed, grim-visaged great-aunt Tabitha, a sharply drawn, bewhiskered great-grandsire, or a demure likeness of great-grandma when she was a little girl, were apt to consider such portraits too crude and queer for the modern home. Consequently they were either banished to storeroom or attic or hung shamefacedly in the darkest corner of an upper hall.

But from the early 1920s on, an increasing number of people began to acquire homes in the country. Many of these were century-old farm cottages or the more pretentious dwellings of former country squires. Furnishing them with antiques was the logical sequence. Old furniture, hooked and braided rugs, quilts, coverlets and other furnishings settled into place as though part of the house, but the problem of pictures for the walls did not appear to be wholly solved by prints, engravings, or even mirrors. Perhaps the floral or scenic design decorating the upper panel of many of the latter furnished a clue.

At any rate, here and there one began to see primitive portraits done in the manner of the one shown here. Being among the neglected antiques of yesterday, they were relatively inexpensive and fitted into these country homes as perfectly as the hooked rugs on the floors.

In fact, rugs and paintings had much in common. Both were forms of folk art; both were original, creative achievements by self-taught persons of more or less artistic ability. The rug hooker had done a still-life, a portrait of a pet animal, or a scene, with home-dyed rags and a hook as a medium. The artist worked with paint and brush and relied on native ability and what knowledge he had picked up as a sign or coach painter to depict what he saw.

There was another reason why the portraits seemed particularly at home. Their subjects had lived in just such houses; had sat for their portraits in just such rooms; and in many cases the artist had been a guest in the house while he executed likenesses of the family, severally or as a group.

Previous to 1839, when the daguerreotype was perfected, pencil and brush were the only means of recording human likenesses. There were trained artists at home and abroad to depict the wealthy and politically important, of course, but were it not for the unknown, itinerant limners of a century and a half ago, we should have very little idea of how the average American of that day looked.

These men with a knack for getting the human image down on canvas, wood, or paper worked largely in New England, New York and Pennsylvania. As already stated, sign and coach painting were among their other occupations. Their clients were prosperous farmers and substantial citizens of small towns. Like the country craftsmen who made furniture, pottery, silver and pewter, their work varied according to their artistic skill. But with even the crude examples there was a realism and sincerity that art critics today have tardily begun to appreciate and collectors have realized is a large part of their charm.

Although artists with a craft rather than an academic background must have worked in America as early as the closing years of the 17th Century, most of the primitive paintings collected today date from about 1790 to 1860. They occur in oils, watercolors and pastels. While canvas was usual for oils, wood and even upholsterer’s ticking were sometimes used. The portrait of Duncan Phyfe, New York’s most celebrated cabinetmaker, was done on the latter.

Like the photographer of the latter half of the 19th Century, the itinerant painter had a set way of posing his subjects with certain stage props to signify the profession or occupation of the sitter — binoculars for a sea captain, a book for a clergyman or a lawyer, a doll or other toy for a child, a flower or a book for a woman, etc. Some itinerant artists prepared a number of canvases with scenic or plain background and body of subject completed, save for the head. Then as summer weather made traveling about the countryside feasible, sought and secured commissions from clients living in towns and on farms.

With this time-saving device the sitter only had to pose long enough for the head to be added and possibly the stage prop that labeled or flattered him, as the case might be. Most of the portraits were unsigned, but a few were, and tradition has supplied enough information regarding the identity of these old artist-craftsmen so that a sizable list of the men and women working during this period has been assembled. It may be found, along with many excellent examples of American primitive portraiture in a recently published book by Jean Lipman, published by the Oxford University Press, New York, under the title American Primitive Painting.

With the example shown here both subject and artist are unknown. It was done in oils on canvas between 1840 and 1850, as the costume indicates. The demurely patient little girl was probably about six years old. The artist depicted her glancing up very naturally.