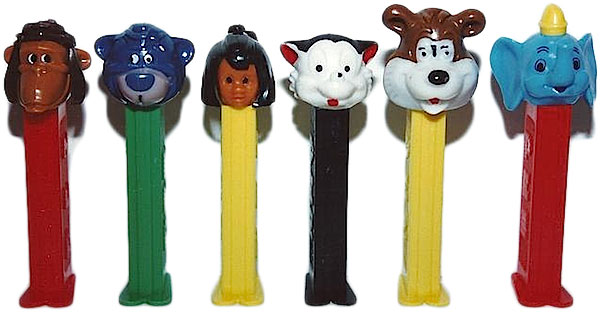 How sordid could the Pez-dispenser underworld be? That question was probably running through the mind of movie producer David Klawans when he noticed a curious item on eBay in the summer of 2014. It seems a guy named Steven Glew was offering the book and movie rights to his life story as the world’s most notorious and successful Pez-dispenser smuggler. The price tag for this exclusive peek into the lucrative collectible-Pez-dispenser black market of the 1990s was several hundred thousand dollars.

“Extreme collecting is a psychopathological form of collecting.”

The existence of such an underworld was news to Klawans, but the Hollywood producer knew a good story when he saw one—he had previously turned a “Wired” magazine article about the escape of six Americans during the 1979 Iran hostage crisis into the Academy Award winning hit “Argo.” So Klawans called a journalist friend named Jeff Maysh and told him about the eBay listing. “David said to me, ‘This would make a great magazine story,’” says Maysh when we spoke recently, “so I did it.” Maysh didn’t buy the book or movie rights to Glew’s life story, but his article on Glew and the $4 million contraband-Pez-dispenser empire he built and lost, titled “The Pez Outlaw,” has just been published in Playboy (an excerpt of that article is reprinted with permission below).

Convincing an eccentric upper-Midwesterner like Glew to trust a suave London-born journalist like Maysh took some doing. “He was one of the most difficult interviewees I’ve ever had to convince,” says Maysh. “By his own admission, Steve suffers from OCD and bipolar disorder, and he’s a recovering alcoholic and drug addict. He’s a very paranoid guy. He doesn’t leave his farm; he’s a recluse. It took two months just to persuade him that my intentions were real, that I wanted to write his story. I believe I’m the first person outside of his family to visit him at his farm in some years.” 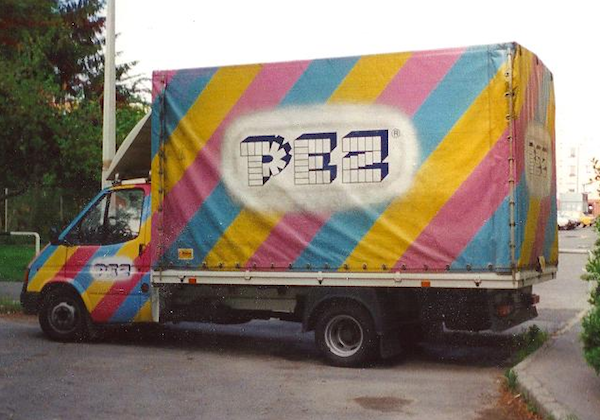 Top: Glew freely admits to smuggling thousands of Pez dispensers like these from Hungary into the United States. Above: Glew and his son, Joshua, used to buy contraband Pez dispensers out of the backs of official Pez trucks, like this one, in Hungary and Slovenia. Both photos via Pez Outlaw Diary

Maysh’s article tells Glew’s tale of white-knuckle, Eastern European border crossings in the dead of winter; secret meetings with code-named sources (Elvis, Geppetto) in authorized Pez factories in Slovenia and Hungary, where he purchased rare Pez prototypes worth hundreds of dollars to Pez collectors back in the United States; and the financially brutal tactics of the U.S. branch of the Pez Corporation (which has its world headquarters in Austria) that crushed the fortunes of the self-described Pez Outlaw.

The Black Santa that started Glew’s career as the Pez Outlaw. Photo via Pez Outlaw Diary

For Maysh, Glew’s tale had all the earmarks of the work of a classic “unreliable narrator,” which is why the writer spent months interviewing “dozens of people in the toy-and-candy collectible industry and various dealers in the Pez community” to verify Glew’s claims. All but a handful of details checked out, and even Glew’s OCD came to Maysh’s aid. “He kept almost every fax and piece of correspondence,” Maysh says of Glew’s record keeping. “I was able to find shipping documents, and his receipts for various trips to Europe were very helpful.”

Maysh also spoke with Glew’s wife, Kathy, and their son, Joshua, who joined his father on most of their Eastern European adventures when he was still in college. “I didn’t know until I got to Michigan that this was really a father-and-son story,” Maysh says. “They bonded while on their bizarre journeys. They didn’t have much of a relationship before that—Dad was an alcoholic and a drug addict, Joshua was a teetotaling all-star student in high school and college—but they came together in their quest to find the rarest Pez.”

Maysh can sympathize with the mindset that drives such quests. His love is not for Pez dispensers, although he admits he now has a “modest” collection of maybe 40 or so pieces. Rather, Maysh is an avid collector of soccer jerseys. “I’m as passionate about soccer jerseys as Steve is about Pez dispensers,” Maysh says, “so I understand his world, including the passion and paranoia that drives collectors almost to the ends of the earth trying to get that one thing.” Happily for Maysh, he has his Holy Grail: “I own a 1994 jersey worn by Jurgen Klinsmann during his debut for my favorite team, Tottenham Hotspur. It’s widely considered to be the shirt to have.” Lest you doubt Maysh’s word on the importance of this article of used clothing, his Klinsmann jersey is currently housed in the National Football Museum in Manchester, England.

If Maysh’s article on Glew generates the sort of Hollywood buzz that followed the “Wired” piece that led to “Argo,” Glew might yet sell the book and movie rights to his story, though he’s had no offers so far. And if that happens, the Pez Outlaw himself has some ideas for casting, at least according to the listing for his life story that’s still posted on eBay. “Gabby Hayes (Roy Rogers movie sidekick) is dead,” Glew writes, “so Bill Murray would be fun.” 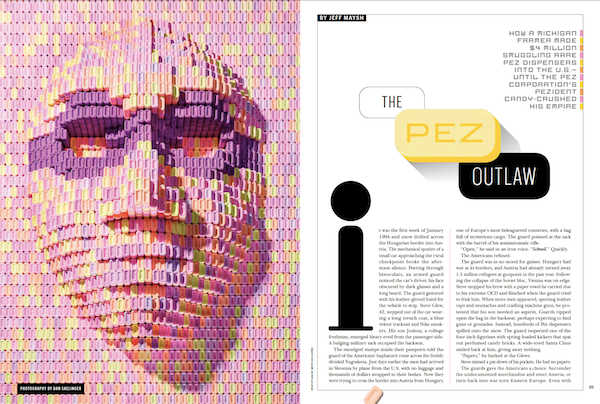 A 1993 toy convention changed Steve’s life forever. As he tells it, a mysterious woman opened her jacket and showed him a Silver Glow Pez, a Holy Grail for Pez collectors.

She whispered to him in broken English, “There are many more where I come from.”

“Where did you get it?” asked Steve, hypnotized.

“Direct from factory in Slovenia,” she whispered.

“All you need to know is Kolinska.”

Steve had never left North America because of his intense fear of flying, but he agreed to go after being prodded by Joshua. They emptied their savings accounts, ordered emergency passports and on January 2, 1994 soared over the Swiss Alps in a twin-prop plane. “The pilot left the controls to serve drinks, and the turbulence was unreal,” Joshua recalls. His terrified father turned green.

It was worth it. In their minds, the streets of Slovenia would be paved with priceless Pez dispensers. Kolinska turned out to be the name not of a town but of a nondescript packaging facility. Joshua, the teetotaling star of his high school’s drama club and a resident advisor in college, drove them over Ljubljana’s romantic bridges and out of Slovenia’s capital.

It was a rare adventure for the father and son. “Dad would work so long and hard that he often fell asleep and crashed the truck. It was a struggle for him to make enough money for the family,” Joshua says. “He wasn’t an approachable guy.” Kathy had realized years earlier that Joshua had inherited his father’s obsessive nature: The teenager bought M&Ms wholesale and undercut the Boy Scouts’ prices, adding to his college savings.

But Kolinska was not the Pez jackpot the Americans had envisioned. The warehouse owners explained that they had a few pieces for sale, but the real Pez nirvana was a plastics plant in Ormoz˘, Slovenia, where the dispensers were manufactured. The factory bordered Croatia, however, where a war for independence was raging. “You should not go there,” they warned.

The 100-mile-long freeway to Ormoz˘ was one of the most dangerous routes in Europe, and the Glews crisscrossed perilously high bridges and dodged horse-drawn carts. When they arrived in Ormoz˘ the industrial smog was so thick they could barely see the two-story building, further obscured by tall pine trees.

A worker led Steve and Joshua across a catwalk suspended above the factory floor. Below them, thermoplastic machines roared and hissed, producing dispensers with a satisfying thump-thump-thump. “The repetition and sheer volume of product was hypnotizing for guys like us,” recalls Joshua. In a secret laboratory a worker smoked a tiny cigarette while hunched over the latest Pez creations. A starstruck Joshua asked for his autograph, and the embarrassed worker said he “felt like Elvis.” They all laughed, and the worker’s code name was born.

“Elvis was a frustrated genius, a wild card who was always doing experiments with Pez,” recalls Steve. “But his bosses in Austria always rejected them. I told him that in America, collectors would go nuts for these experiments.”

In this plastic Valhalla, shelves overflowed with prototypes and a cast of rejected characters. Steve sweated with excitement: The pursuit of Pez had now taken over his life. A leading expert on compulsive-collecting disorders, Mark McKinley describes this behavior as “repetitive acquisition syndrome.” “Extreme collecting is a psychopathological form of collecting,” he says, and it can even result in “breaking laws, hurting people, going to the poor house.”

Steve ordered Joshua to fetch the cash from their car, telling him, “Bring it all. Just bring it all.” As Joshua crossed the catwalk, alone and invisible to the workers below, he danced a happy dance all the way over.

Elvis showed Steve a Santa Claus dispenser with a black face. “I nearly fell over,” says Steve. Pez bosses had scrapped the idea, but Steve knew that Black Santa was the Pez de résistance. He bought as many as he could carry, filling a military sack with them and a trove of other plastic treasures.

So when the Austrian guards stopped Steve and Joshua at the Hungarian border and threatened to confiscate the toys, the Glews fled east to Budapest, bringing their Black Santas with them. Back in the U.S. the dispensers sold for hundreds of dollars each, and Steve vowed to return to Europe, next time with serious money.

PezPEZ was invented in 1927 in Vienna, Austria, as a peppermint flavored breat…