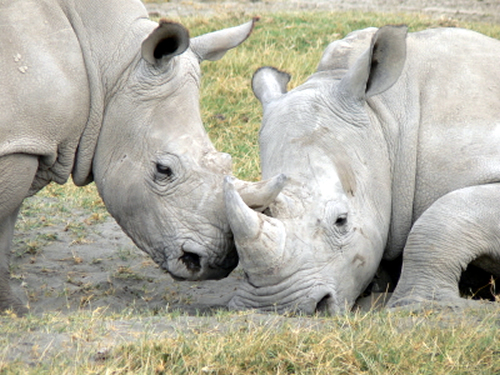 Today the “New York Times” reports that as many as 30 museums in Europe have experienced thefts of rhinoceros horns in 2011. A recent example occurred on July 28, when the horn of a stuffed rhino that had been on display since 1907 at the Ipswich Museum was unceremoniously snapped off. Two other rhino horns, including one still attached to its skull, were also grabbed. Ignored was a gold-leaf Egyptian death mask on loan from the British Museum.

Turns out a lot of misinformed people believe the horns have medicinal value, which has sent their black-market prices soaring. In the Times article, a detective in the art-and-antiques unit of London’s Metropolitan Police Service, Ian Lawson, estimated that a single horn can sell for as much as $200,000, while horn powder is going for around $40,000 per pound. As of this morning, gold was trading at well under $2,000 per ounce, or $30,000 or so per pound.

While it’s probably obvious that stealing a rhinoceros horn to grind it up into dust, let alone killing a living rhino for the same purpose, is a disgraceful and indefensible practice, a few weeks ago, we wagged our finger at “Antiques Roadshow” for its admiration of antique rhino-horn art. The cause of our consternation was the taping of an episode in Tulsa, Oklahoma, where a Roadshow appraiser, Lark Mason, was shown a quintet of beautifully carved rhino-horn cups. He appraised them at more than $1 million, making these decorative antiques the highest priced objects ever on the popular PBS show. 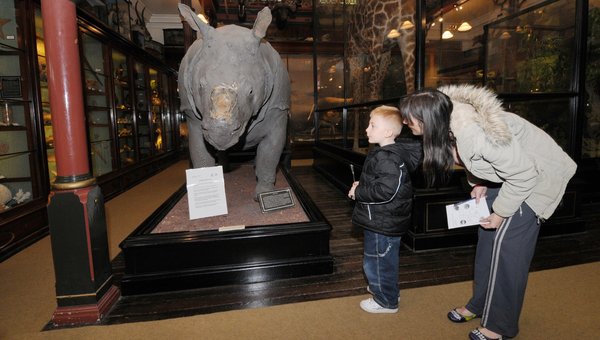 At the Ipswich Museum in England, Rosie the rhinoceros is now hornless. Photo by David Corio for The New York Times

At the time, we were struck by the contrast between what “Roadshow” appeared to be doing (i.e., celebrating the artistry and value of these 17th- or 18th-century Chinese pieces) and the message promoted by another PBS program, “Nature,” which just a few years earlier had bemoaned the fact that, “All five of the world’s diverse species of rhinoceros have been brought to the edge of extinction because of human appetite for their distinctive horns.”

One reader of our article chided us for judging “Antiques Roadshow” before we had even seen the episode with the horns, which will air in 2012. “So the assumption is that during the appraisal, the expert doesn’t make mention of the affect the production of these cups had on the animal population?” asked Erin. “I’m going to give him the benefit of the doubt and say he does – having watched the show, they are not exactly short on information regarding an item.” Others thought we had raised a non-issue: “These were made centuries before the idea of conservation even existed.” noted Penny. “They don’t have to discuss ivory every time it is appraised; why this?” But a few people shared our confusion. “These things are beyond repulsive,” said Attie. “Shame on Antiques Roadshow for giving them one minute of time.”

What do you think? Should rhino-horn objects, even aesthetically significant ones, be banned from public view, or are they part of our cultural history? To learn more about the current state of the five remaining rhino species, check out the events around World Rhino Day, whose supporters include organizations like savingrhinos.org and Animal Planet’s Jeff Corwin.