The following piece tells the story of how Santa Claus came to be, from his debut in 1844 to his evolution from New Year’s icon to beloved symbol of Christmas. It originally appeared in the December 1939 issue of American Collector magazine (Volume VIII Number 11), a publication which ran from 1933-1948 and served antique collectors and dealers.

Santa Claus made the front page in 1844. In that year his likeness appeared in The New Mirror, a weekly published in New York City, together with a leading editorial about his debut. However, the steel engraving was entitled: “Santa Claus. The Night Before New Year 1844.” Our traditional Santa belongs to Christmas Day, December 25, but it was December 30, 1843, when the Order of St. Nicholas, a group made up of descendents of old New York Dutch, resurrected the jolly St. Nicholas of Holland for their festival. You can’t beat the Dutch! While confusion reigned in the minds of other citizens as to whether Christmas or New Year’s should be the gala day for gifts and festivity, the Dutch of the Order settled on the day that gave them the venerable St. Nicholas. 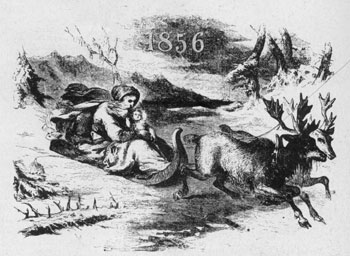 Reindeer But No Santa Claus: An unsigned woodcut illustration from Gleason's Weekly of 1856, showing Father Time in the traditional sleigh holding a small child in his arms. The conventional pack of presents was yet to be included in such a drawing.

There had been a dinner and speeches about the New Year on that December night and much talk about the patron saint who distributes cookies and good things among deserving children. He was described as a jolly gentleman who enjoyed his pipe and schnapps and who told merry stories with zest.

Late that evening the Dutchmen sat about the long table wearing cocked hats, smoking tasseled pipes, speaking smooth Dutch, reliving old times, drinking their schnapps. Then, out of the smoke above the chair of the president of the Order of St. Nicholas, appeared the figure of St. Nick himself. His hat was cocked and hung on one side of his head, his pipe was in his mouth, his glass in his hand and “his round, fat, little belly excited merriment.” He wore short, tight breeches, drawn up with such exactness that they held him suspended. And he made a speech:

“Gentlemen,” said he, “you are assembled to commemorate my day of birth and to prepare for the jovial holidays. I give you hearty thanks. Rise, gentlemen, over your heads will I break your pipes and so make you knights of the Order of St. Nicholas…. Eat koolslaw, abstain from evil… I mean plum pudding. I will attend you again on New Year’s and be glad to receive you at every open house.” Whereupon, in true Santa Claus fashion, he made a profound bow and gathering the smoke around him, he departed.

This short Dutch figure of Santa Claus is the one that the artist for The New Mirror engraved to appear in his publication the first week of January, 1844. There followed in succeeding years Gleason’s Pictorial Drawing Room Companion, a Boston publication; Brother Jonathan, Frank Leslie’s Illustrated News, Illustrated News (formerly Gleason’s and owned by Barnum for a year), and others, but none of them included Santa Claus in their Christmas pictures. It was not until Harper’s Weekly, issue of January 5, 1863, that Santa Claus came again into his own and then it was the front page with a cartoon by young Thomas Nast, who that year put Santa in the news pictures. 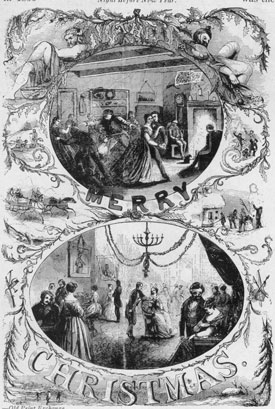 New England Christmas in 1851: From the first issue of Gleason's Pictorial Drawing Room Companion, Boston, 1851. It shows Christmas as celebrated informally in the country and formally in a city mansion -possibly on Beacon Hill. Santa Claus is conspicuously absent, although holly and mistletoe are used as design motifs.

This neglect of the famous old character was probably due to the confusion about celebrating Christmas Day. New York City was pretty well settled on the Dutch traditions and New Year’s Eve was the high day of their holiday seasons. Grand balls, calls on New Year’s Day, magnificent dinners, presents and festivities were stressed with the coming in of the New Year. In New England a hangover from Puritan days brooded; the early Fathers believed Christmas to be a pagan and wicked invention of the Devil, and December 25 was celebrated quietly, if at all. Thanksgiving had been introduced by the Puritans to take the place of Christmas.

However, Christmas was always the favored day with many. In 1822 Clement C. Moore had written the poem A Visit from St. Nicholas (better known by its first line, “‘Twas the night before Christmas”) for his children and through a family friend it was published without the author’s name in a Troy, New York, newspaper in 1823. Not until 1837 did Mr. Moore publish the poem as his own, illustrated with Santa Claus and reindeers.

Merchants of New York published advertisements in the daily newspapers about proper gifts for the holiday season, stressing New Year’s Day. Godey’s Lady’s Book, a popular publication, gave little or no space to the subject of Christmas Day; even after Harper’s Weekly had published Nast’s Christmas cartoons and illustrations of Santa Claus, Godey’s devoted meager space to Christmas, and the jolly old saint was not a member of Godey’s picture gallery.

Brother Jonathan, in 1853, published humorous Christmas sketches in a special holiday number, although Santa Claus was not among them. The sketches were English in feeling and design; many of them might have come out of Dickens’ books, and Santa Claus was not an accepted personage in the English Christmas scene. Publisher of this humorous and bombastic New York weekly, was an assured and spirited soul, one B. H. Day, grandfather of Clarence Day, whose play Life with Father is running currently on Broadway.

“Merry Christmas in Town and Country” is the subtitle on the page of engravings celebrating the Christmas season in Gleason’s Pictorial Drawing Room Companion for 1851. This was the first year of the weekly’s existence, and there was no Santa Claus. Instead, a group playing blindman’s buff, a drawing room in which Christmas greens and mistletoe are features, dancing couples in gay evening attire; figures of Comedy and Tragedy heading the page and “Merry Christmas” in bold letters across the face of the engraving. In 1854, Santa Claus still had not arrived in Gleason’s, but three Christmas spirits hovered above the sleeping forms of two children: one bearing gifts and one recording good and bad deeds. 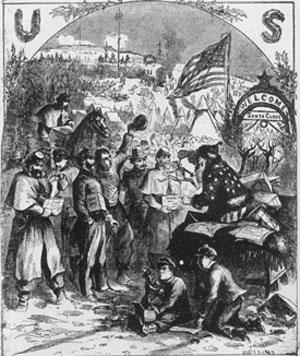 Santa Claus at the Front: This illustration from Harper's Weekly, January 3, 1863, was the first Santa Claus drawing by the artist Thomas Nast. His later cartoons of Boss Tweed and the Tammany Tiger probably did more than anything else to rid New York City of its infamous Boodle Ring. During the Civil War, like Winslow Homer, he made many drawings of military scenes, both in camp and in action. This is a woodcut, but bears only Nast's signature.

One would expect a forward-looking illustrated newspaper such as Leslie’s to introduce Santa Claus. Founded in 1856 its front page for the Year’s greetings was Father Time riding in a sleigh pulled by two reindeer, the New Year babe in his arms. Here is an approach to Christmas, old St. Nick and the eight prancing reindeers, but only a gesture.

Santa Claus of the engraving in The New Mirror had been a small, short-legged Dutch Santa carrying his gifts in a neat basket on his back. Sitting before the fire, pipe in mouth, small peaked cap on his head, he fills the stockings that have been arranged for him.

The jovial Santa Claus that appeared in Harper’s Weekly eighteen years later was a combination of the Dutch, the German Peize-Nicol (the German St. Nicholas) of Thomas Nast’s youth, a jolly Roman, and the fat cheerful English figures associated with Christmas. This was the Santa Claus that Nast drew as his first Christmas assignment for Harper’s, and it was this jovial gentleman that he continued to draw for successive Christmas numbers of Harper’s until 1886.

All of this may stir memories in the minds of many of a famous controversy that went on in various New York newspapers, following the publication of Albert Bigelow Paine’s book on Thomas Nast in 1904. There were two factions: those who believed Thomas Nast had originated the Santa Claus with which everyone had become familiar, and those who attributed Santa’s discovery to others. The devotees of the Thomas Nast tradition may rest easy, for Nast seems to have been the first artist to have presented the patron saint in newspapers of America, as the Christmas Santa – The New Mirror engraving of St. Nick on New Year’s Eve preceded Nast’s St. Nick. The two figures were not at all alike in conception.

Thomas Nast became a member of Harper’s staff in 1862, having served with Leslie’s Weekly, the Illustrated News, and others. Born in Germany in 1840, he was brought to the United States when five years of age.

The year 1862 was during the Civil War and the first St. Nick drawing for Harper’s was Santa Claus in Camp. Draped in the Stars and Stripes the furclad, rotund figure was shown distributing gifts to the soldiers. In the same number of Harper’s, Nast had a double-page drawing called Christmas Eve, which brought hundreds of letters of appreciation to the publishers, so compelling was the spirit of home, family, and goodwill that Nast had caught in his work. 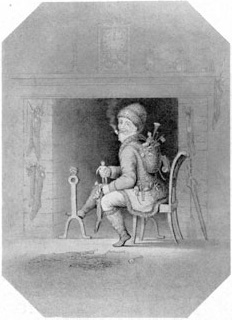 To cover his war assignments Nast visited battlefields, and his work had that human touch that carried his message home. He was commended by General Grant, who said Nast had done as much as any man to win the war. Abraham Lincoln referred to his drawings and cartoons as invaluable. “Nast,” said Lincoln, “has been our best recruiting sergeant.”

This was the cartoonist who invented the Tammany Tiger, who broke the Tweed Ring, who introduced the Democratic Donkey and the Republican Elephant. His influence was tremendous, bringing despair to the hearts of those against whom he lifted his pen, and joy to those who shared his beliefs. Yet the same hand drew the tender faces of children dreaming of Santa Claus, the mother and wife at prayer, the weary soldier, the unfortunate.

Yearly, the Order of St. Nicholas holds its famous dinner at which clay pipes are distributed as they were in the year of 1843, when St. Nicholas was resurrected for the annual festival. The New England protest of “pagan festival” has disappeared; entire communities now gather in public squares around giant Christmas trees, while voices are raised in cheer and song and a jolly Santa distributes gifts. He is no longer “a sort of foreign exotic which has not taken root.”