That Time the French Aristocracy Was Obsessed With Sexy Face Stickers 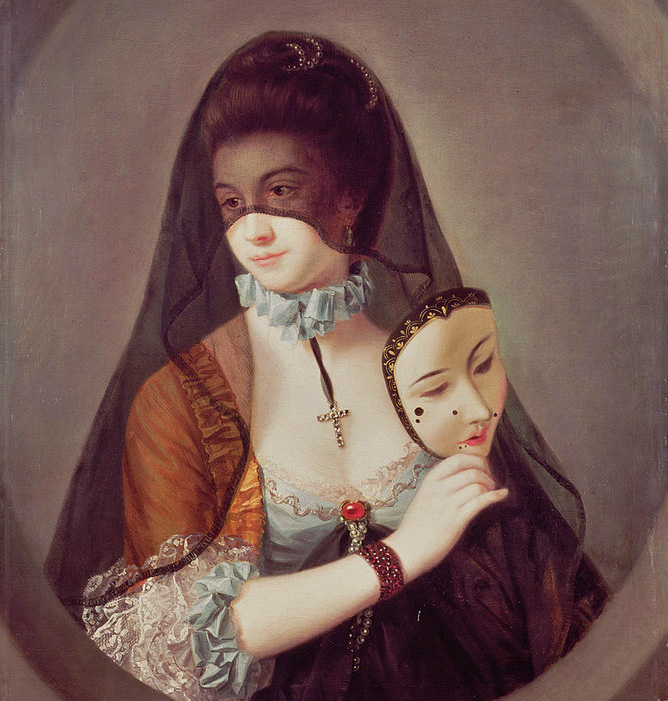 The French called them mouches or “flies,” because of the dark spots’ resemblance to small insects alighted on fashionably pale skin. In England, artificial beauty marks were known as “plaisters” or patches, since they often covered scars and pockmarks, thereby transforming a blemish into a feature. During the late Renaissance, these conspicuous spots spread among the stylish set and tantalized onlookers, to whom they seemed like a secret language: Were hers placed in symbolic locations? Did his cover signs of illness or injury? Were messages encoded in the spots’ distinctive shapes?

“She had this one imperfection that made her even more beautiful.”

Mostly, people just wanted to look good. While utilitarian face patches date back thousands of years, their aesthetic application only took off in the late 1500s. As lowbrow street fashion and courtly costumes began to overlap, so-called “beauty patches” were simultaneously praised and derided, a sign of the turbulent times.

“Face patches have been used since ancient times for purely practical purposes to cover up scars or blemishes,” says Dr. Kimberly Chrisman-Campbell, who’s written extensively on fashion during the Early Modern period. “And that continued through the 18th century, as visible in the Joshua Reynolds portrait of British soldier Charles Cathcart wearing a giant patch over his battle scar—nobody was wearing patches like that for fashion reasons. 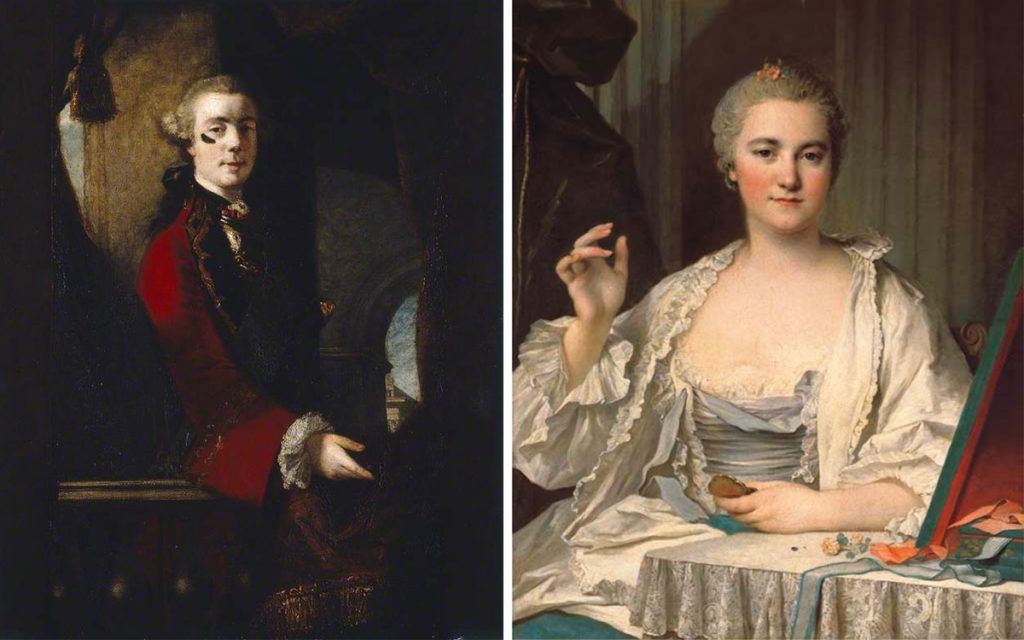 “But in the late 16th century,” Chrisman-Campbell continues, “people started wearing black patches not to cover something up but rather to show something off. The contrast was thought to make the skin look beautiful and to draw attention to certain parts of the face, like the eyes.” One might place a small black circle on one’s cheek, and maybe another crescent over an eyebrow—just enough to offset the ivory pallor of a face in full makeup.

Unlike our modern concept of realistic, discreet beauty marks, these patches were designed to stand out, playing to the Renaissance ideals of visibly enhanced beauty. Made from black silk taffeta or velvet, patches were often sold with an adhesive backside of resin-based mastic, though they could also be stuck on with saliva. Most patches were simple round dots, but some were cut into intricate shapes of small crescent moons, diamonds, or stars. 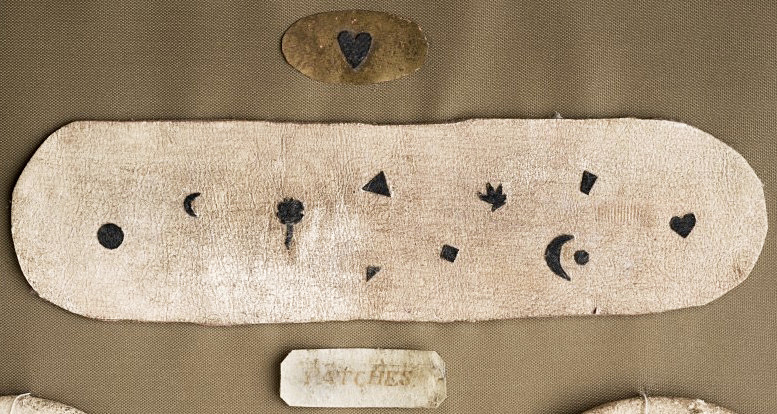 A selection of 18th-century fabric patches. Via the Wellcome Library, London.

“A lot of early writers said patches were an imitation of Venus, who supposedly had a mole on her cheek,” Chrisman-Campbell says. “She had this one imperfection that made her even more beautiful, and the patches were supposedly imitating that.”

Initially, these artificial beauty marks were a peculiarly French phenomenon, but as the country cemented itself as the leader of European fashion, the rage for beauty patches spread beyond its borders. “During the 16th and 17th centuries, France was becoming the center of taste in fashion and style, especially after Louis XIV came to the throne in the early 17th century,” Chrisman-Campbell says. “Spain had been the leader of fashion and luxury goods up until then but was losing power, and everyone was beginning to look at what the French were wearing and doing.” 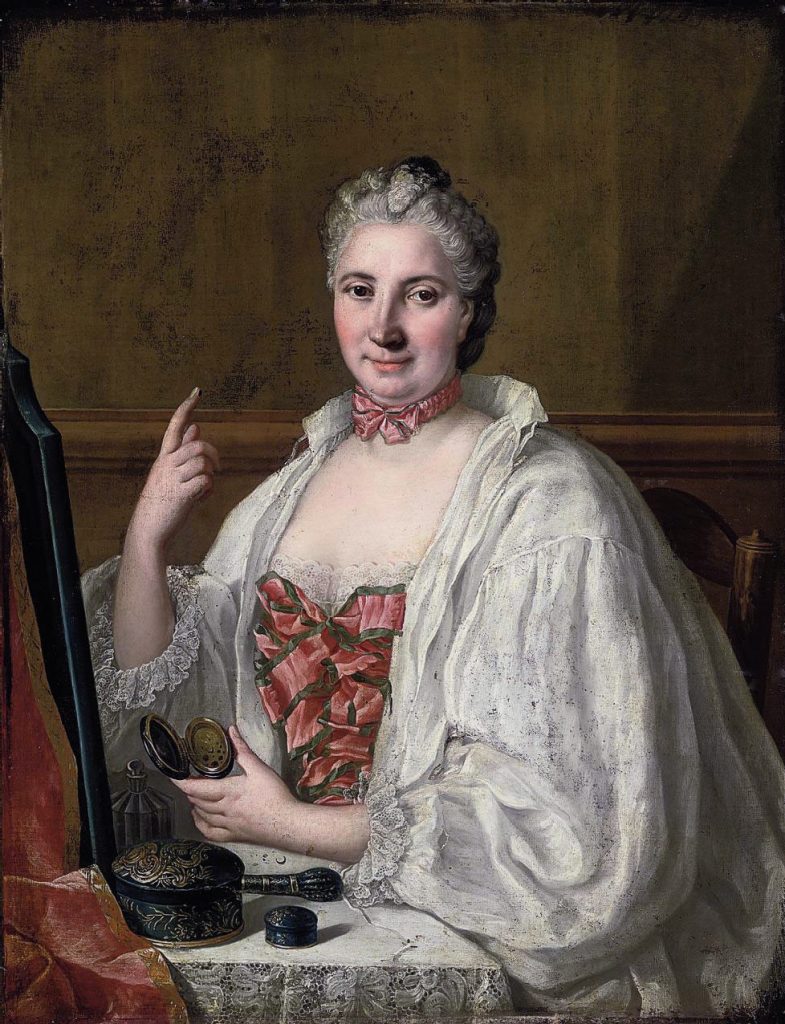 In her 18th-century portrait, Anne de la Grange-Trianon fixes viewers with her conspiratorial gaze just as she prepares to apply a beauty patch. Via Wikimedia. (Click to enlarge)

The beauty patch took off at a time when French men and women alike wore extensive makeup, including white powder in their hair and white paint on their faces, accented with rouge on the cheeks and bright vermillion lipstick. Religious conservatives and other cultural critics, particularly those in more pious England, frequently denounced the dishonesty of cosmetics like patches.

In his 17th-century book, Anthropometamorphosis: Man Transformed; Or, The Artificial Changeling, British author and physician John Bulwer took an anthropological approach to popular body modifications in various cultures around the world. Bulwer included an illustration in the 1653 edition comparing the European affinity for face patches with tattoos, henna, masks, veils, and piercings in other locales, deliberately exaggerating the trend by depicting a woman wearing a patch in the shape of a horse-drawn carriage. 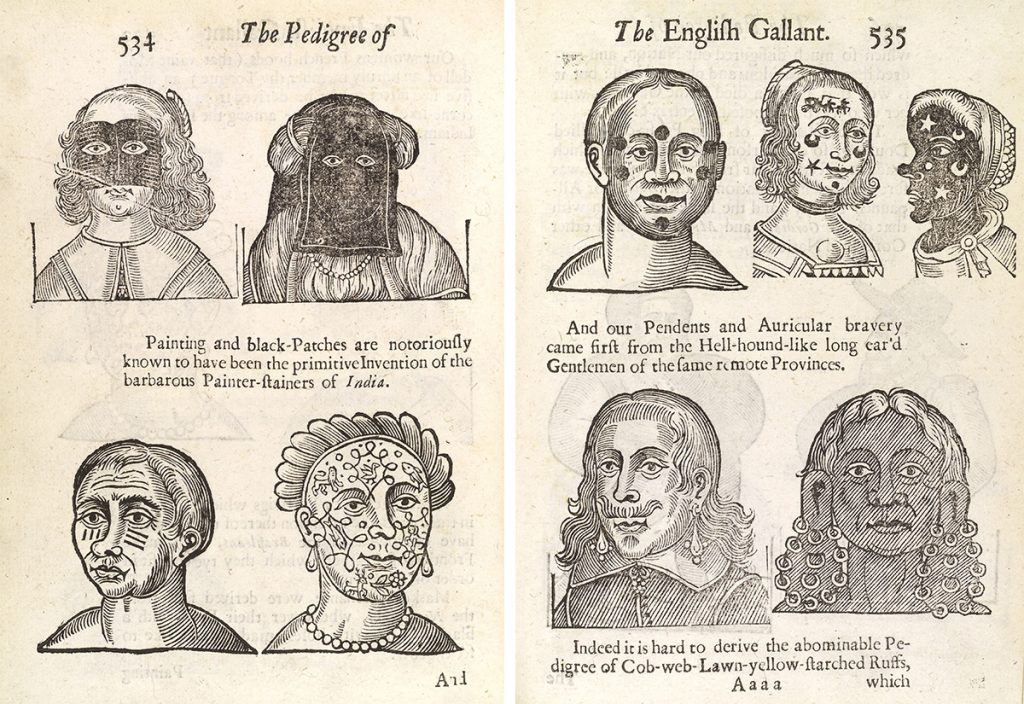 Despite their prevalence, some European authorities saw a corrupting power in such cosmetic enhancements. “British ruler Oliver Cromwell supposedly banned them,” Chrisman-Campbell says, “not because of sexual immorality but because they were a sign of aristocratic affectation, making them immoral in the sense of being elitist. Of course, patches came back in England under King Charles II, who grew up in France.”

The heightened artifice of beauty patches also called attention to the larger ritual of transforming one’s face and body for maximum desirability. In France, this practice was known as the “toilette,” which evolved from a term for the bit of cloth or “petit toile” that covered a dressing table. In the late 17th century, the morning toilette of France’s upper crust imitated the decadent dressing customs of royalty, who would sometimes entertain guests as they put the finishing touches on their makeup and outfits, along with help from a horde of servants. 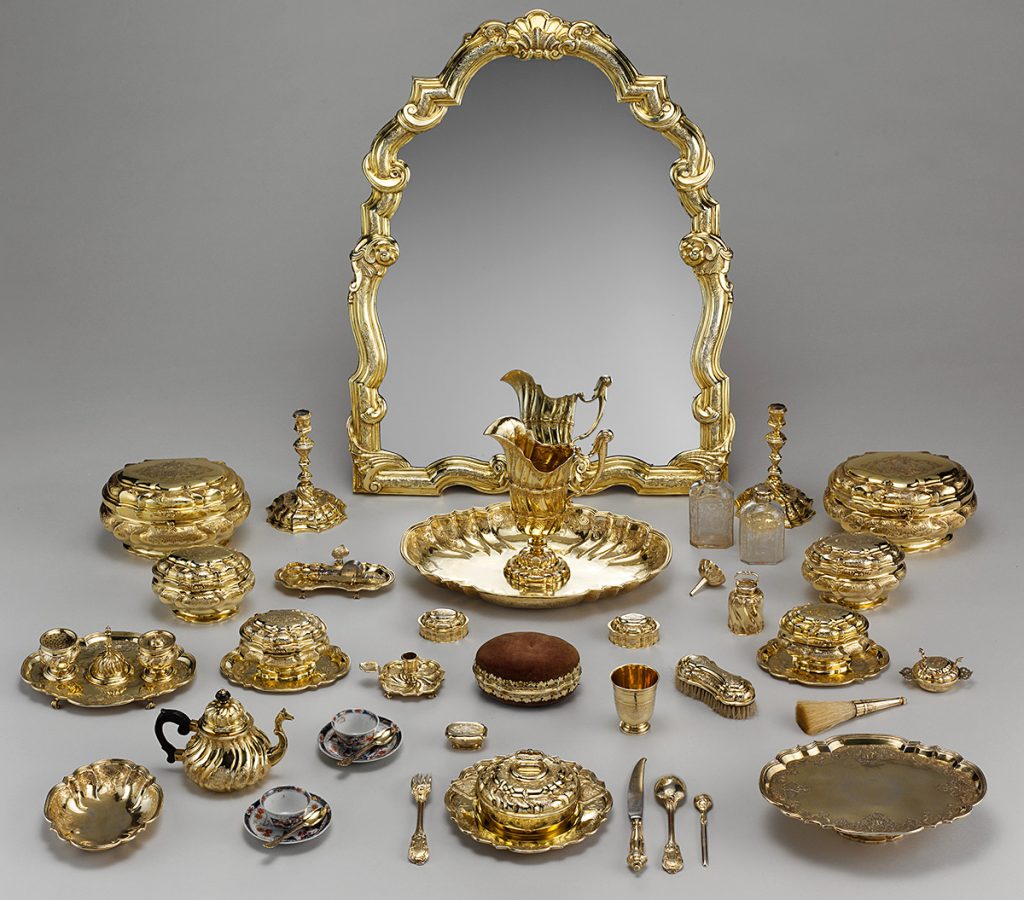 A complete toilette set in gilt-silver and porcelain made in Germany, c. 1743–45. Via the Metropolitan Museum of Art. (Click to enlarge)

“Rather than an intimate, private moment, a woman’s toilette was a performance before a large audience, who doubled as actors in the scene,” Chrisman-Campbell explains in her essay for the J. Paul Getty Museum’s book, Paris: Life & Luxury in the Eighteenth Century. As the ritual grew in social importance, toilette sets began to encompass a larger array of opulent objects: combs and brushes; decorative containers for storing cosmetics, patches, and utensils; a table adorned with embroidered fabric; and the ultimate luxury object, an extravagant mirror.

Toilette scenes became a popular subject for contemporary art, and these depictions often used the application of beauty patches to build an illusion of intimacy—a flirtatious peek behind the artifice that avoided revealing anything compromising. “In a lot of these images of the toilette, the women are fully clothed, their hair is done, and they’re putting on the last ribbon, powdering their nose, or putting on a patch,” Chrisman-Campbell says. “It was a very sexual ornament but also safe and inoffensive. It became a symbol for this whole world of getting dressed, the nudity and all that that implies, without ever showing anything truly private.”

While elaborate containers for holding face patches started as part of the morning toilette set, later versions were made to be carried like a compact for re-applying the spots as necessary. Although such boxes ranged from cheap souvenir trinkets to custom engraved cases adorned with precious gemstones, the patches themselves remained inexpensive to purchase.

Left, an Italian micro-mosaic patch box from around 1775-1800. © Victoria and Albert Museum, London. Right, a porcelain patch box in the shape of a masked woman, c. 1750. Via the Metropolitan Museum of Art.

Aileen Ribeiro, author of Facing Beauty: Painted Women & Cosmetic Art, says the trend was affordable enough that someone of any social strata might wear beauty patches. “Women of all classes wore patches in the 17th and 18th centuries,” explains Ribeiro. “Patches were sometimes known as ‘court plaisters’ as they were worn at the Royal court, but status was reflected in the number and placement of patches on the face. Magazines in the 18th century stated that women shouldn’t wear more than two and never near the mouth.”

Despite their prevalence, face patches were still guarded by social codes that had to be walked like a tightrope: Wear too many, and you came off as desperate or worse; too few, and your look was passé. Regardless, the usefulness of patches wasn’t lost on those living during an era of limited treatments for diseases like syphilis and smallpox, both of which could severely damage the skin. 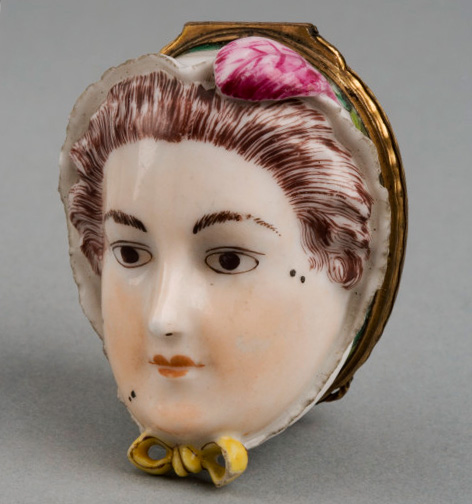 A porcelain patch box in the shape of a fashionable woman’s face, replete with her own beauty marks, c. 1749-1760. © Victoria and Albert Museum, London.

“Smallpox was extremely widespread until the late 18th century, when inoculation became much more commonplace,” Chrisman-Campbell says. “It really destroyed your face, to the extent that if you had a bad case, a few patches weren’t going to help. If you had just two or three scars on your face, though, you could wear patches to cover those.”

Writers at the time claimed you could identify prostitutes because their faces were dotted with far too many patches, ostensibly to cover the symptoms of sexually transmitted infections. “The problem arose when lower-class women used too many patches,” Ribeiro says. “In the first print of Hogarth’s ‘A Harlot’s Progress‘ from 1732, the innocent country girl Moll Hackabout arrives in London to be ensnared by the brothel-keeper Mother Needham, whose face is covered with black beauty spots. Such beauty spots signified not merely a language of sexual coquetry, but sexual license.” 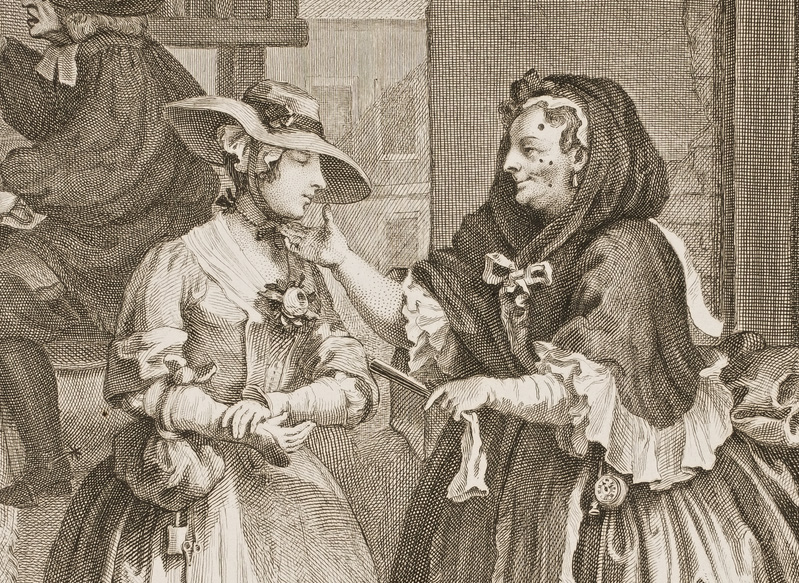 Despite the prominent association with sexuality, or maybe because of it, beauty patches soldiered on and remained popular for around 200 years. Even in the 20th century, the trend for flashy beauty spots has gone in and out of vogue every few years. From early film stars like Clara Bow and Jean Harlow to contemporary celebrities, these idealized flaws served to accentuate remarkable beauty—just as they supposedly did for Venus, the original trendsetter.

“Exceptionally beautiful people who happen to have natural moles or beauty marks—people like Marilyn Monroe or Cindy Crawford—have regularly made them appealing again,” Chrisman-Campbell says. 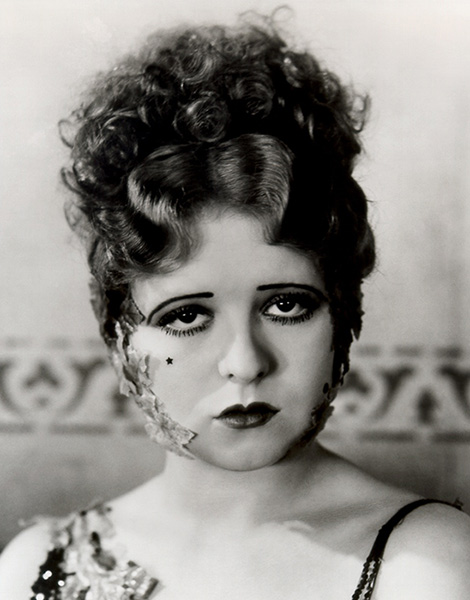 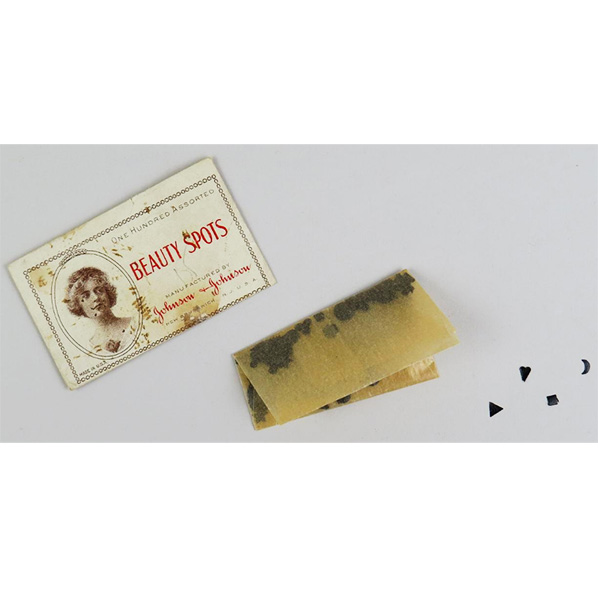 Adhesive beauty spots made by Johnson & Johnson circa 1915-1930. Via the Smithsonian Museum. 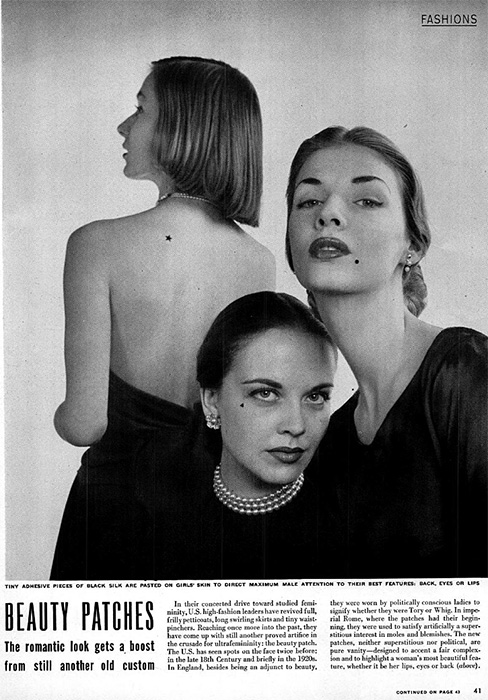 "LIFE Magazine" ran a story on beauty patches in its February 2, 1948, issue.

The second part of "LIFE Magazine's" 1948 spread on beauty patches. 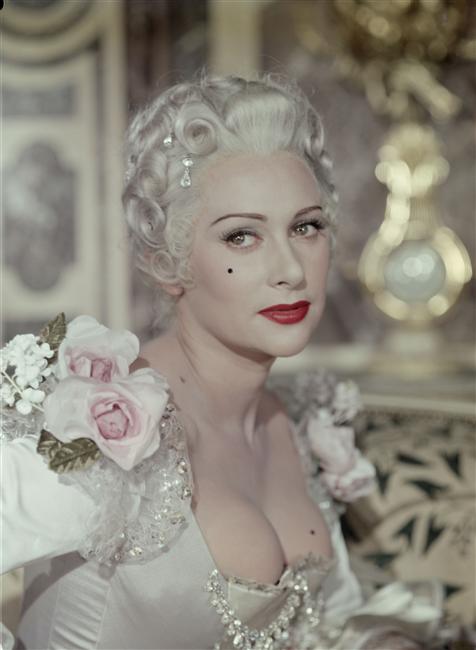 But as natural irregularity in the skin has become acceptable or encouraged, other aesthetic enhancements have one-upped the comparatively discreet beauty mark. “I think maybe the modern equivalent is something like a tattoo or piercing,” Chrisman-Campbell adds. “A ring in your nose calls attention to that part of your face in a way that makeup alone can’t. One of the most beautiful tattoos I ever saw was on a woman’s inner ear.”

Similar to modern tattoos and piercings, beauty patches were intentionally eye-catching. “I think even with men like Charles Cathcart, who wore patches to cover battle scars, there is an aspect of deliberately calling attention to oneself,” Chrisman-Campbell says. “This guy’s a war hero and he doesn’t want you to forget it.”

Still, whether it’s beauty patches or tattoos, there is always the risk of overdoing it. As the text accompanying an 18th-century engraving of a woman at her toilette by Gilles-Edme Petit reads: “These artificial spots / Give more vivacity to the eyes and to the complexion / But by placing them badly, one risks / Blighting beauty with them.” 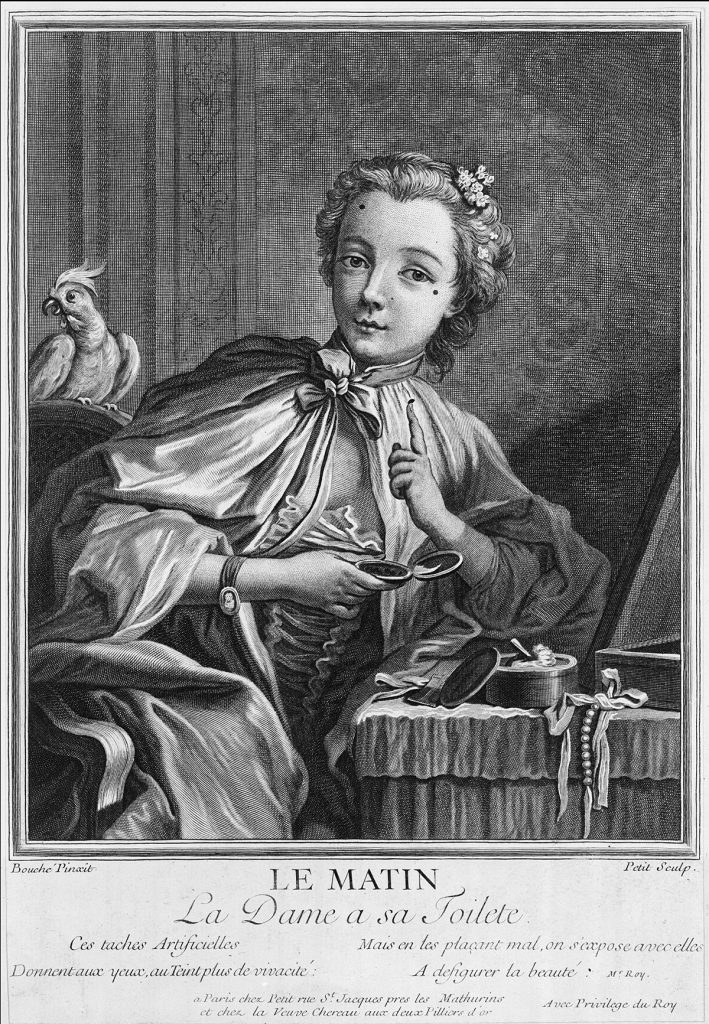 Fashion to Die For: Did an Addiction to Fads Lead Marie Antoinette to the Guillotine?Hello Sailor! The Nautical Roots of Popular Tattoos 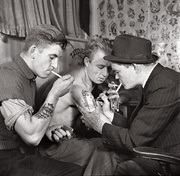 CompactsIn the 1920s, la garçonne, or the young flapper woman of the Art Deco era, …

Brushes and CombsLong before people started lathering their hair with shampoo, they used com…